IMF "leaked" Ukraine and put himself in a strange position

November 20 2015
155
As expected, the IMF did not respond positively to Putin’s proposal to restructure Ukraine’s debt.


Naturally, the stumbling block was Russia's desire to receive loan repayment guarantees from the IMF or from a large European bank. 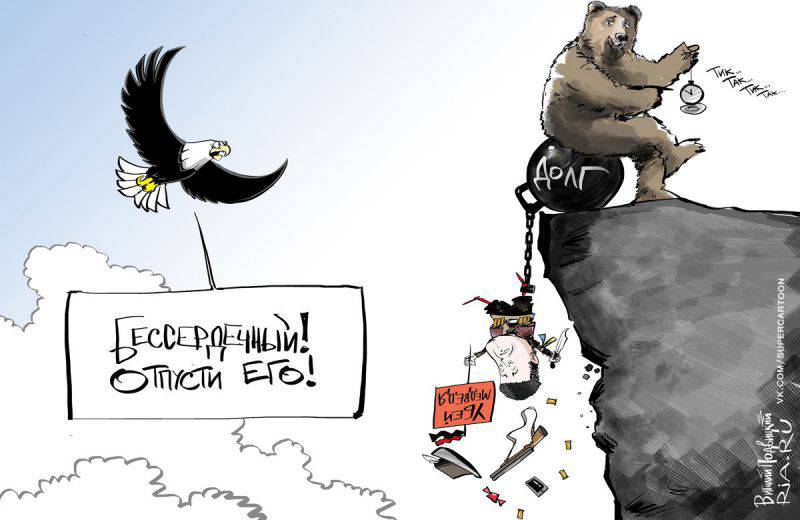 In the International Monetary Fund "expect direct discussion" between Moscow and Kiev about the Ukrainian debt to Russia. The press service of the fund confirmed this in response to a request from TASS correspondent Andrei Shitov to comment on the new statements of the head of the Ministry of Finance of Russia on this topic.

After the G20 summit, Russian Finance Minister Anton Siluanov said that Russia was ready to restructure Ukraine’s debt under the guarantee "from the United States, or the European Union, or a large bank in coordination with the Russian Federation." In this case, the Russian proposal would not create a precedent for changing the IMF policy regarding lending to countries with overdue official debt.

Alas. Both in the United States and in Europe, they are well aware of how solvent Ukraine is. And there was no one who wanted to be substituted for the payment of three billion dollars to Russia. Expected, in principle.

And being faithful to their policies, the IMF did not dare to risk such a sum. From here and frank bleating on the topic "sort it out yourself."

Frankly, there’s nothing to understand. It is clear that Ukraine will not repay this debt voluntarily. Well, or when Russian Tanks will be in Priluki. I.e never. And there is no reason to rely on European judicial institutions such as Stockholm, Brussels or The Hague. Processes will drag on for years. That only on hand to the Ukrainian authorities.

Yes, the situation is not pleasant. The amount is fair, but not lethal for Russia. Only an outspoken fool in our time could seriously consider her return. Moreover, they gave Yanukovych a debt, and since then the situation has changed, and not for the better.

The only thing that inspired hope for a return of debt is that Ukraine is firmly hooked on the European feeder. And frankly played in the topic of obtaining loans for life. In light of the fact that the IMF intends to change even its Charter in order to continue the infusion of funds into the Ukrainian economy, the prospect is not pleasant.

However, one should not forget that all changes are very closely watched by those who are interested in them no less, and maybe even more than Ukraine. We are talking about Romania, Bulgaria, Portugal, Hungary, Cyprus, Moldova. And, of course, about the pearl of the EU - Greece.

To say that the designated members of the EU have everything in order in the economy - to say nothing. And changes to the IMF Charter would have been very useful for the hands of the same Greeks. So expect. And by accepting the changes in favor of Ukraine, which is not yet a full-fledged EU member, the IMF is seriously "substituted" for the countries listed above. Because they are quite EU members (except Moldova), and they want money no less.

The game of "catching up" with the default of Ukraine continues. Whether the IMF will have time to accept all the necessary changes, or December X for the Ukraine will break through the "hour" Ch "is a matter of just a month. In any case, we will not see the peremoga.

Unpleasant, of course, but true.

Ctrl Enter
Noticed oshЫbku Highlight text and press. Ctrl + Enter
We are
IMF changes the rules: not every debt needs to be repaid nowBRICS: friendship against the dollar
Military Reviewin Yandex News
Military Reviewin Google News
155 comments
Information
Dear reader, to leave comments on the publication, you must to register.