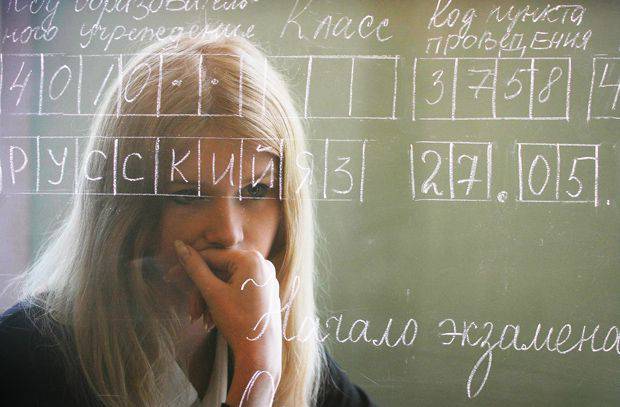 The final “rout” of Russian school education is scheduled for spring.
In the spring of 2016, "explore the competence" of teachers of Russian, literature and mathematics. At the same time, the Unified State Exam in Russian will be divided into “basic” and “profile” levels. In order not to beat around the bush for a long time - most of the specialists with whom we were able to talk, quietly and without emotion evaluate these two seemingly unrelated events in the following way: “Well, finally, the Soviet, Russian school has suffered. Everything. This is the end".

Let's start with the first news. Subordinated to the Ministry of Education and Science, the Federal Service for Supervision in the Field of Education and Science (Rosobrnadzor) intends to conduct a study of the competencies (allocated to the RP) of teachers of the Russian language, literature and mathematics in the spring of next year. “Now, in November, we are testing this research on a small sample. Then a wider sample of research will be conducted, with thousands of teachers participating. We hope that the sample will be representative, ”the press service of the Rosobrnadzor reported.

The reason for checking out teachers is whether they know their subject or simply pretend they know that, according to the ministry, was the fact that “earlier, in April-May 2015 of the year, Rosobrnadzor had already conducted a study of the level of professional training of teachers in other subjects - stories and social studies (about 6 thousands of participants). The study showed that every fourth teacher needs additional professional development in working with a historical and cultural standard. ”

Wow, what an amazing fact! Who would have thought? Go to any pedagogical university and see what kind of beggarly salaries teachers receive, including professors and doctors of science, what a crazy load they have, what "modern" technical and methodical teaching aids are at their disposal. How much they have to nobody useless and nobody readable scribbling (school teachers this concerns not less). And then think: who will go there to study and who teaches there? At best, enthusiasts who still hold their native education somehow.

Well, okay - there is a problem: every fourth teacher of history and social studies does not really know his subject at all. He “needs additional professional development in working with a historical and cultural standard.” What it is, is not explained. But even if you have a need to fill something - fill. And further increase your mysterious "historical and cultural standard" all at once. As it was in the Soviet school, when the teacher talked with the methodologist almost every week.

However, the motive of a real increase in the knowledge of teachers of Russian language, literature and mathematics goes to some second or even third plan, when you read more attentively into the informational message, which the officials from education decided to share. The main thing is that no one else in the world, including the conceptualists and creators of the ministry’s most beloved ministry, knows exactly either the evaluation criteria, the procedure, or the tasks and methods of the upcoming “competence study” of teachers. But this is not a ticket to you to check. There is some mysterious and obviously incomplete "toolkit".

On the other hand, how happily they continue to report to the press center of the Ministry of Education: “In November (that is, less than two weeks. - RP) this year we plan to conduct a pilot study to test the tools for assessing competence of teachers. According to preliminary estimates, about 2 thousands of teachers from more than 20 regions of Russia will take part in it. The results will be analyzed by the end of January next year, in order to finally prepare the toolkit for a large-scale inspection in the spring. ”

So, in two weeks quickly, but, of course, qualitatively - who would doubt! - will conduct a "pilot study." For these noble scientific goals, 2 will torture thousands of teachers, who, we note in passing, have to complete the half year. And then quickly, quickly, but as we believe, qualitatively and qualitatively, in just a month and a half, they will reinvent, complete, and finish up the “toolkit for large-scale testing in the spring.” The “scale” of spring testing is simply scary to provide, if only now thousands of teachers take 2 for the experiments. And what they will do there with them, no one really says. "Testing tools", they say, will be carried out.

Okay! Good! They revealed negligent, incompetent, ignorant teachers of the Russian language, literature and mathematics. There really are many, unfortunately. What are you going to do next with them? Retraining? Retrain? After all, the relevant institutions, they say, still exist. More energetic to involve in the activities of methodical associations? Assign mentors to them? 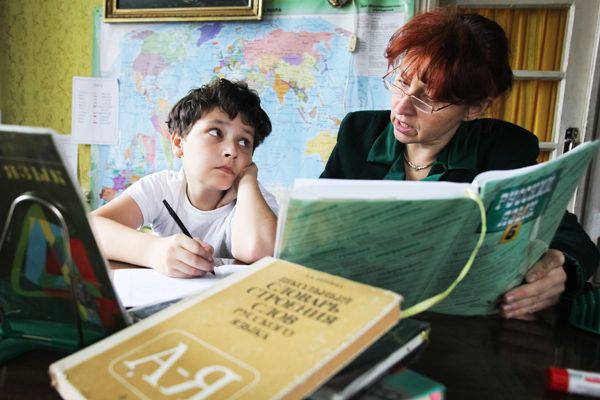 A child during classes with a tutor in the Russian language. Photo: Alexander Ryumin / TASS
In addition, after all, now every five years, the teacher must be re-certified to confirm and / or receive the next category. And for this you need to do a lot, oh, do it: go through the 72-hour courses, where they not only tell, but ask. By the way, these courses are de jure free, but de facto how lucky anyone will be. Need a workshop for certification. In addition, you should submit a lot of documents: the results of the Unified State Examination, the Olympiad (and not a school one, but a higher rank), a list of publications. Yes, a lot more then. Thus, it is impossible to identify a neznak? Why? Then why will it be possible to identify them in the course of the “competency study” that has not yet been tested and not completely invented? And then why all this trouble with certification and categories?

It seems that the answer is simple and lies on the surface: the whole idea, poorly explained, carried out at the speeds of the Large Hadron Collider, has one goal: the next dismissal of teachers. And due to this, some increase in salaries to the lucky ones. Experience shows that any innovation of our socio-educational and health authorities ends only with this — budget optimization. Why this time should be different?

But here another problem arises. But why carry out such complex manipulations, invent “tools”, organize “approbations”, explore “competences” if all the teachers - and especially the Russian language, literature and mathematics - can simply be expelled all together. For why are they needed now? After all, in parallel with the Ministry of Education, the Concept of teaching Russian language and literature in schools is being adopted for general discussion, which will completely deprive the very need for students to study these subjects.

“It’s too early to talk about the results of the discussion: it has just begun; but I will predict his main result right now, ”publicist Alexander Privalov predicts. - We will be informed that in the hot discussions the society comprehensively assessed the idea of ​​splitting the final exam in Russian into a basic and profile level - and this idea was approved. This will be a historic step. Only it still lacks it so that an ordinary school finally becomes a school where it is not necessary to study ... What a splitting of the final exam will actually mean is easy to see from the example of mathematics. This compulsory subject went on such a road a year earlier, and you can already see what comes to it. ”

“The introduction of the Unified State Exam has deprived the school of the right to evaluate the success of its students: the graduation and entrance exams merged, or rather, the second one swallowed the first,” continues Alexander Privalov. - Until recently, there were two mandatory exams: mathematics and Russian; in all other school subjects, it was almost officially allowed not to learn and not to study - this did not threaten anyone. With the splitting of the exam, mathematics becomes almost optional. The “base” level of the child will pass in the ninth grade, without straining at all (for a satisfactory assessment, you need to solve three or four tasks on the account within the first hundred), and then stop even pretending that it teaches some kind of mathematics. Now, I'm afraid we will see the same thing with the Russian language. Even the current exam on it easily passes to the top three an intelligent preschooler (confirmation is easy to find in runet), and the future “basic” will inevitably be even easier. ”

Therefore, in order to train for the “basic” level of the unified state examination of the schoolchild, or whatever it is now called “the consumer of educational services,” neither pedagogical institutes, teacher training institutes, or arrogant professors with academics and their expensive academies will be needed. And future teachers - or in a new way to call them “producers of educational services” - could be prepared in the Armed Forces, again for synergy and for greater efficiency. And what is the result of all this savings! In the Ministry of Finance, the savings will be calculated - and they will not be able to count how many of them will be. And then somewhere they will put it in a secret place so that not a single penny saved will be spent for anything. Then the real monetary beauty will come! And the Russian language? Well, who needs it - let him hire tutors and take the “core” part of the Unified State Exam, and then he goes to that unfortunate dozen of higher educational institutions that remain.

“Splitting the unified state examination in Russian is not only a step towards the destruction of the school, it is a way to destroy the nation,” Alexander Privalov sadly concludes. - The proposed innovation will put an end to any attempts to rectify the situation with the teaching of Russian language and Russian literature. And the situation is simply dangerous. Russian is not just one of the school subjects. This is the backbone of the nation. The way we speak Russian depends on the intellectual level of the nation; how we teach children the Russian language depends on the future of the nation, its very safety in the future. Providing the Ministry of Education with the opportunity to continue reporting on the 98-percentage level of mastering the Russian language, despite the fact that school graduates will not be able to either write or even understand two paragraphs of simple text, is to click on a national catastrophe. And, of course, this innovation will finish the secondary school, depriving it of the last tool - the last element of commitment that it offers to its students. Studying at school with the complete elimination of serious examinations even cannot be called profanation. ”