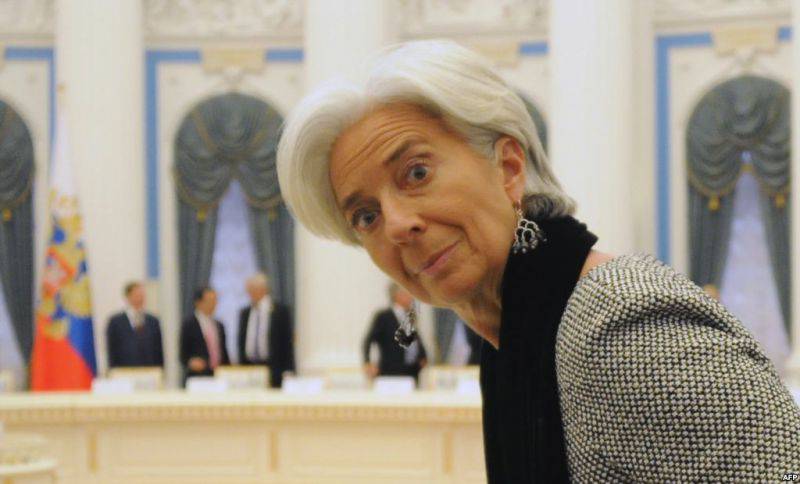 News about the proposal of the Russian Federation to restructure the Ukrainian debt, known as the “bribe to Yanukovych”, caught our surprise. At first there was joy. Something like the summer of last year on the outskirts of Ilovaisk: they say a little more - and the parade of victory in the lair of the enemy is assured. Then, as then, the first doubts arose: is there a trap here? And why did Putin talk to Lagarde about the fate of 3 of billions of dollars, adding that he was waiting for guarantees from the US government, the EU or international financial organizations? And is the aggressor not encroaching on a third loan guarantee in 1 a billion dollars., Promised by the States? Not surprisingly, until yesterday evening, the Ukrainian Ministry of Finance did not give specific comments ...

The only craft that Ukraine has mastered in the last year to perfection is to turn into a problem for all progressive humanity. Europe gives us money, trade preferences and pays for Russian gas. Americans give guarantees. Well, more good advice. And to them - the Georgian reformers. The IMF, the World Bank, the EBRD, the IFC and the rest lend to you. New debts are needed to pay old ones, so the process promises to be endless. The OSCE is busy with our conflict in the Donbas. The Red Cross is looking for the dead bodies at the airport in Donetsk. The UN is supplying tents and some other nonsense. In short, all in business.

Despite such worldwide support, we can’t demonstrate striking successes. Negotiations on Donbass slip, the fight against corruption does not grow together, preferential trade with the EU does not add up, lustration is a cause of lawlessness.

At the same time, we are trying to fight the aggressor with all available means, including credit. What creates additional inconvenience to international financial organizations in general and the IMF in particular.

In short, due to the 3 debt situation of a billion dollars to the Russian Federation, the International Monetary Fund would have to change its internal procedures and rules, risking a conflict, in which debtors could wriggle out of guaranteed return to both other countries and to the Fund. And this directly contradicts the basic task of the IMF - to keep the balance in the global financial system. As far as possible practically, of course. Now - a few details, in relation to the message of Putin.

So, as the news agencies conveyed his words, not Moscow, but the IMF proposed to transfer payments on the debt of Ukraine to the 2016 year. In turn, the Kremlin decided to "dig" deeper.

Such a period is supposedly defined “in view of the specific working hours of the International Monetary Fund”. "We talked on this issue with Mrs. Lagarde, today" on our feet, "but nevertheless we talked with the President and the Secretary of the Treasury of the United States," Putin said, adding that the proposal was received with interest. "We have agreed with partners that in the very near future we will substantively discuss the details of our proposals," Putin concluded.

The details in question are, in fact, the willingness of Ukraine’s senior partners to vouch for their “protege”. Putin did not accidentally emphasize that Russia expects guarantees from the US, EU or international financial organizations for the restructured debt of our country. “We asked for such guarantees either from the US government, or from the European Union, or from one of the reputable international financial institutions. Noting that this issue is expected to be resolved before the beginning of December of this year. ”

For reference. Debt repayment to the Russian Federation on 3 billion dollars is coming 23 December 2015 of the year. It was on this day, but two years ago, in the midst of Maidan, Ukraine received the first tranche of a credit line for 15 billion, signed by ex-President Viktor Yanukovych as part of an agreement in December 2013. The interest rate on the Eurobonds of Ukraine issued as security for debt was 5% per annum.

As the media have repeatedly written, according to the agreement, Russia had the right to demand an early repayment of a loan of 3 billion if Ukraine’s national debt exceeds 60% of GDP. But, although the national debt amounted to 63,7% of GDP as early as August of 2014, the Russian Federation did not demand early repayment. However, she did not agree to restructuring together with other creditors.

The last time such a position was voiced a few weeks ago - at the October meeting of finance ministers in Lima. There, Natalia Yaresko called on the Russian Federation to accept the terms of the restructuring, to which the committee of creditors agreed, confirming the words of her boss, Prime Minister Arseniy Yatsenyuk, that there would be no other conditions. To which Finance Minister Alexander Siluanov said that 3 billion dollars belong to a sovereign loan, which cannot be restructured in a “company” with another category of debt — securities bought by private creditors.

The debt confrontation between the warring countries should theoretically turn into a lawsuit. Moreover, both the Ukrainian side and the Russian side could sue. Some would require a determination of the status of debt in court. Others are his payouts.

At the same time, one of the forms of default came almost guaranteed. It does not matter - cross-default, technical or some other. Extreme in this situation would be ... the IMF. As it has been repeatedly reported, according to the existing internal rules of the Fund, if the borrowing country refuses to fulfill its obligations on intergovernmental or international loans, including servicing the debt to the IMF, it is obliged to cease cooperation with such a country and its lending. This requirement has always been fulfilled and caused all defaults, including the loudest in Argentina.

Therefore, it was a difficult choice for the IMF - either to change the terms of crediting for everyone (and not personally for Ukraine, as some of our clever people tried to portray, - the author’s comment), or not to give us loans. And state our financial "death."

According to a carefully cultivated version of the Ukrainian side, the Foundation was inclined to the first variant of the development of events and planned to change the rules. Or at least (there was also such an option, which we threw in missions) to consider, by default, Russian debt not sovereign, but private, and continue lending, despite its non-payment, as decided by the majority of directors.

The reason for this decision, some experts called the hybrid nature of the loan. Although he signed in the framework of the official visit of Yanukovich to Moscow, he was issued according to market rules, through the placement of bonds on the Irish Stock Exchange. On the other hand, the buyback was at a rate lower than the market rate - at 5% per annum. And this is an argument for the court to recognize the debt is not commercial, but interstate.

Considering the ambiguity of legal interpretations, the Russian side, represented by Siluanov, has repeatedly stated that it can challenge both the change in lending approaches (the possibility of not including obligations to sovereign creditors), as well as the consistency of the IMF’s financing program for Ukraine.

This, in turn, turned into a new headache for the Foundation. Which was reinforced by another nuance: according to some Western experts, the IMF could change the rules, but ... only in the future. And you cannot change the conditions for a previously issued loan. Since the credit line to Ukraine was opened under the current conditions of the Fund, the changes in the rules do not apply to it. This was, in particular, said by the CEO of Smith Research & Gradings Terence Smith.

In short, it became clear to everyone that the head of the IMF Christine Lagarde in the issue with Ukraine will not envy. Moreover, the promised incentive prize in the form of the privatization of Centrenergo, allegedly close to her in spirit, by the French company Gas de France, has not yet been received.

And here the situation was ruined by Vladimir Putin. Well, as ruled ... Not so much at all, but made an offer that the IMF is unlikely to be able to refuse. Americans and Europeans (or rather, Americans) may not show enthusiasm. But Lagard is clearly a stone from the heart fell ...

Although, on the other hand, the States still decided to give us $ 1 billion of loan guarantees. If it turns out that these guarantees were useful for obtaining a delay in debt repayment, then nobody would notice this especially in the confusion of the Paris attacks and the Syrian events.

However, Ukrainian analysts admit that our own opponents of the government can notice and thus prevent the IMF from getting out of trouble. The well-known economist Alexander Okhrimenko believes that the government will be an ardent opponent of the stated concept due to political expediency. But, if the United States is told to agree on Putin’s restructuring, we will agree. But whether they say it or not depends on the negotiations of the “senior comrades”. In any case, Ukraine is left with one thing - to fulfill what is agreed upon behind our back ...