Provincial reform 1775 of the year 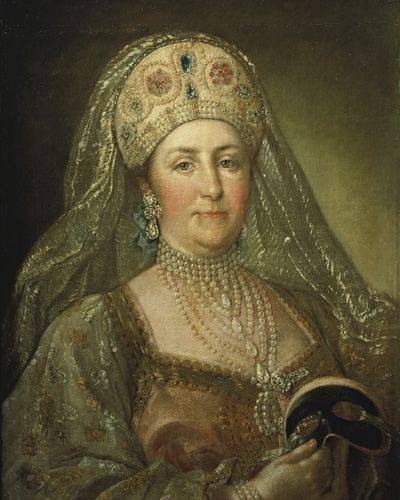 240 years ago, 18 in November 1775, a manifesto on a new regional division of Russia was published. The Russian Empire was divided into 50 provinces. The first 8 provinces were formed by decree of Peter I in 1708 year. Empress Catherine II continued the reform. Instead of provinces, counties and provinces, a division of the country into provinces (300-400 thousand people) and counties (20-30 thousand people) was introduced, based on the principle of the tax-paying population.


The administration was headed by a governor-general or governor-general, subordinated to the Senate and the prosecutor's supervision, headed by the procurator-general. At the head of the county was the captain-police officer, who was elected 1 once in 3, by the county gentry assembly. The provincial division existed in Russia until the 1920-ies, when the provinces were replaced by regions, territories and districts.

From the end of 1708, the city of Peter began to implement the provincial reform. The implementation of this reform was caused by the need to improve the administrative division system, which was largely outdated by the beginning of the 18th century. In the 17th century, the territory of the Moscow State was divided into districts - districts that had close economic ties with the city. At the head of the county there was a voivode sent from Moscow. Counties were extremely uneven in size - sometimes very large, sometimes very small. In 1625, the number of counties was 146, besides which there were parishes. By the 18th century, relations between the center and the province became extremely complicated and confused, and the management of the counties from the center became extremely cumbersome. Another important reason for the regional reform of Peter I was the need to create a new system of financing and material support for the armed forces for successful warfare.

In addition, it was necessary to strengthen the "vertical of power". The Astrakhan uprising and the uprising on the Don showed the weakness of the local government, it was necessary to strengthen it so that the heads of the provinces could solve such problems without large-scale intervention by the center. The governors had all the military power and the necessary military contingent to nip the unrest in the bud without the involvement of troops from the front line. Governors had to ensure timely collection of taxes and taxes, recruitment, and mobilize the local population for labor service.

Decree of 18 (29) of December 1708 announced the intention "for the general benefit to inflict 8 provinces and paint cities for them". Originally, Moscow, Ingermanland (later St. Petersburg), Smolensk, Kiev, Azov, Arkhangelsk and Siberian provinces were created. In 1714, Nizhny Novgorod and Astrakhan provinces were separated from Kazan, and in Riga, 1713 was founded. The essence of the reform was that between the old counties and the central institutions in the capital, the county administration directly subordinated to the cat, there appeared an intermediate instance - the provincial institutions. This was supposed to increase the controllability of the territories. The provinces were headed by governors, endowed with full administrative, judicial, financial and military power. The king appointed the people close to him as governors. In particular, the Petersburg province was ruled by the Menshikov, the Kazan and the Azov gubernias were headed by the brothers Apraksin, the Moscow one - by Streshnev.

Peter's reform was "raw", hasty. Thus, the principle of the recruitment of provinces was not defined. It is not known what the king was guided by when he attributed this or that city to one or another province: the size of the province, the population or economic, geographical factors, etc. The provinces were too large for the provincial governments to effectively manage them. The regional reform did not clearly define the place of the provincial administration in the governmental mechanism of Russia, that is, its relation to the central institutions and the county administration.

In 1727, the administrative territorial division was reviewed. Districts were abolished, county was reintroduced instead. The boundaries of “old” districts and “new” counties in many cases coincided or almost coincided. Belgorod (separated from Kiev) and Novgorod (separated from St. Petersburg) provinces were formed.

Further, until 1775, the administrative unit remained relatively stable with a tendency to disaggregate. So, in 1744 two new provinces were formed - Vyborg and Orenburg. Gubernias were formed mainly in the new territories, in some cases several provinces of the old provinces were distinguished into new ones. By October 1775, the territory of Russia was divided into 23 provinces, 62 provinces and 276 counties. 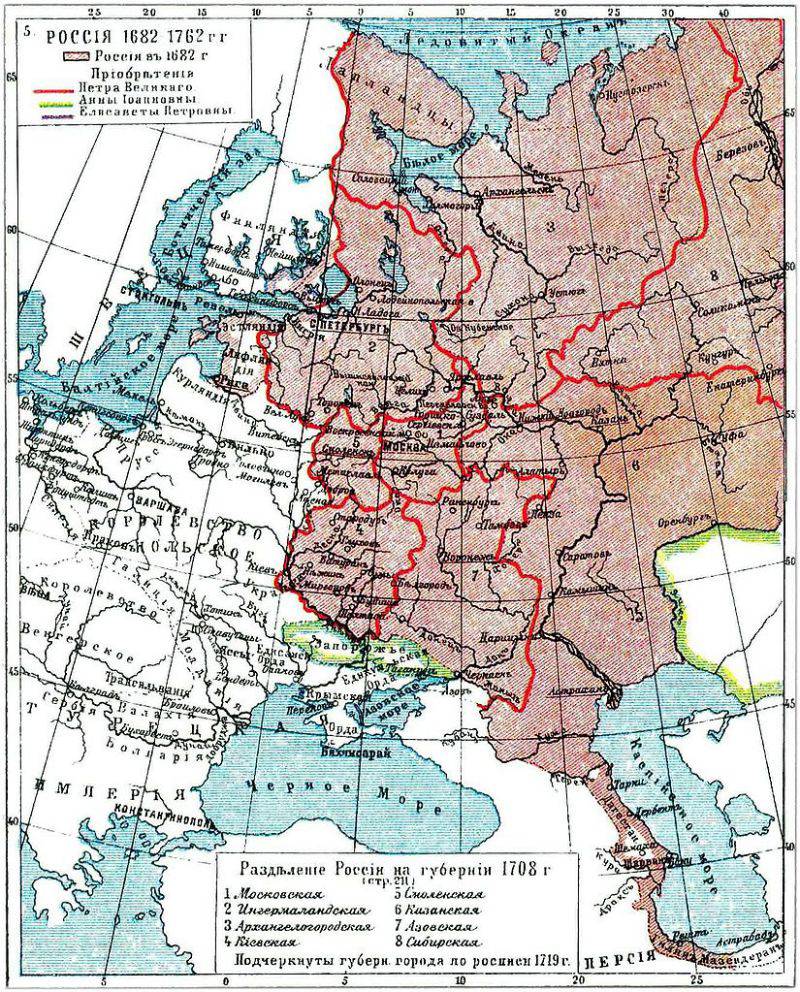 7 (18) of November 1775 of the year was issued a decree of Empress Catherine II "Institutions for the Management of Provinces", according to which in 1775 — 1785. a fundamental reform of the administrative and territorial division of the Russian Empire was carried out. The reform led to the disintegration of the provinces, their number was doubled, twenty years after it began, the number of provinces reached fifty. I must say that under Catherine the provinces were usually called "governorships".

The need for reform was associated with the same reasons as in the time of Peter. Peter's reform was unfinished. It was necessary to strengthen the local government, to create a clear system. The peasant war under the leadership of Pugachev also showed the need to strengthen local power. Nobles complained about the weakness of local authorities.

The division into provinces and counties was carried out according to a strictly administrative principle, without taking into account geographic, national, and economic characteristics. The main purpose of the division was to solve tax and police matters. In addition, the division was based on a purely quantitative criterion - population size. About three to four hundred thousand souls lived in the province, about twenty to thirty thousand souls lived in the county. Old territorial bodies were liquidated. The provinces were abolished as territorial units.

At the head of the province stood the governor, appointed and displaced by the emperor. He relied on the provincial government, which included the provincial prosecutor and two centurions. Financial and fiscal issues in the province solved the state chamber. Issues of health, education, was in charge of the order of public charity.

The supervision of the legality in the province was exercised by the provincial prosecutor and two provincial conciliators. In the county the same tasks were solved by the county solicitor. At the head of the county administration there was a district police officer (captain-police officer), elected by the county nobility, and a collegial management body - the lower district court (in which besides the police officer there were two assessors). The Zemsky Court supervised the Zemstvo Police, oversaw the implementation of laws and decisions of provincial governments. In the cities was established the post of mayor. The leadership of several provinces was transferred to the Governor-General. Governors submitted to him, he was recognized as commander-in-chief in the territory of the general-governorship, if there was no monarch there at the moment, he could introduce a state of emergency, directly address the report to the king.

Thus, the provincial reform of 1775 g. Strengthened the power of the governors and disaggregated the territory, strengthened the position of the administrative apparatus on the ground. With the same goal, under Catherine II, other reforms were carried out: special police, punitive bodies were created, and the judicial system was transformed. Among the negative aspects, we can note the lack of economic importance, the growth of the bureaucratic apparatus and the strong increase in spending on it. In general, the cost of maintaining the bureaucracy during the years of Catherine II’s rule grew 5,6 times (from 6,5 million rubles in 1762 to 36,5 million rubles in 1796) —much more than, for example, the cost of an army ( 2,6 times). It was more than in any other reign during the XVIII — XIX centuries. Therefore, in the future, the system of provincial government was constantly improved.

It must be said that the provincial (regional) division of Russia according to territorial and demographic principles has more advantages than the division of the USSR and the Russian Federation into autonomous republics, territories and regions. The national character of many republics carries with it a “time bomb” leading to the destruction of Russia. The first such disaster occurred in 1991. If the separation of Central Asia and Transcaucasia can still be reconciled, although our ancestors paid a large price for these lands, and their loss hurt Russia's military strategic stability, then the loss of such parts of Great Russia as the Baltic States, Belaya Rus, Little Russia and Bessarabia , nothing can be justified. The military-strategic situation in the western and north-western directions has deteriorated sharply, in fact, the achievements and victories of several centuries have been lost. The ancestral lands of the Russian super-ethnos are lost. Superethnos Russes (Russians) became the world's largest divided people.

The Trotskyist internationalists, creating national republics, planted a "mine" of enormous destructive power under Russian civilization. And the process is not completed. The national republics of the Russian Federation are a blow to the Russian people, who are denied the privilege of developing their own characteristics in special, "greenhouse" conditions and the threat of further decay. The economic crisis in Russia and the beginning of the Third World War, with Russia getting into the conflict along the South-North fault, lead to aggravation of internal contradictions in the Russian Federation, and the ambitions of ethnocratic elites and national intelligentsia that support from abroad can be very dangerous for unity. country. Therefore, in the long term, in Russia it is necessary to return to the territorial division, while preserving only the cultural autonomy of small nations.

Ctrl Enter
Noticed a mistake Highlight text and press. Ctrl + Enter
We are
18 November 1775. A manifesto on a new regional division of the empire was issuedLife of the Yenisei province of the late XIX - early XX century
20 comments
Information
Dear reader, to leave comments on the publication, you must to register.