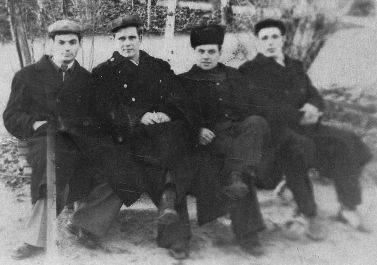 These two Fedor, which will be discussed, were not familiar with each other. I combined them only in my story. After all, both of them, still boys during the Great Patriotic War, did a common thing - they helped with all their children's strength to bring our Victory closer.

Fedya Tolstolobov fled from the village of Aleksandrovka to the village of Apukhtino (both villages in the Terbunsky district of the Lipetsk region). It was as if weights were tied to his legs, sweat was running down his face in cold streams. But Fedya ran and ran forward. In the bootleg of his boot lay a letter for his friend Aunt Vari’s boy. She lived in Apukhtino, in a house behind a green fence. Fedya had been there several times already, and Aunt Katya treated him to raspberries, which grew on this very fence. Now in Apukhtino, as in Aleksandrovka, the fascists are hosting. It is necessary to get close to the house imperceptibly, bend the corner board, put a letter in the hole on it, cover it with earth and leave quietly.

Fedya heard the approaching barking. So, the Nazis still saw how my mother gave him a letter. Or maybe they didn’t see it themselves, but they heard it in another way - in any case, there was no time to think about it.

Fedya did not know that the policeman had learned about the connection with the partisans of his mother, Stepanida Yegorovna. And he really tracked down how she gave Feda a letter, but did not manage to grab the boy, but only his mother. I beat her with a rifle butt and took her to the fascists for questioning. And he went to "correct the mistake" - to search for Fedya. But realizing that he might not catch up with the boy, he took with him a trained German shepherd dog.

... barking was coming. And in the letter that lay in the bootleg - important news for the partisans with whom Aunt Varya keeps in touch ...

With every heartbeat, Fedi had less and less energy. But he fled and fled, leaving a treacherous chain of traces on the thin (it was at the very end of November) snow. Wherever Fedya would turn, no matter how quickly he ran, she would find a shepherd.

“The river is near! - suddenly thought Fedya. “We must drown the trail!”

And, delighted by this thought, he reached the shore and stopped. The river was almost frozen, but a narrow strip of dark, damp water stretched along the coast. The last days of November, cold, snow has already fallen. And the boy is wet with sweat, this is a sure pneumonia, if not death. But in the bootleg of his boot lay a letter that he needed to deliver. On the invisible scales, on the one hand, their own health and life fell, on the other - an important mission, bringing Victory closer. Scales did not hesitate - one bowl instantly went down.

Fedya took out the letter, clamped the precious bag in his hand and stepped into the water. At first he did not feel the cold. But the clothes began to get wet, the water reached my shoulders, my hands were numb. “Go! the boy ordered himself. And I walked along the coast to the icy reeds.

... Maybe now, from the outside, after so many years, there will be an opinion that the boy saved only his life. But I know for sure: it is not. He did not think about it in the first place, not about it.

... Lai rang very close. "It's time!" The boy went into the very reeds, took a deep breath and dived. Only above the water, hidden by reeds and withered water grass, remained a small, but such an important envelope.

The dog and the man swept along the shore. The dog lost track, which went into the river, whined and scurried back and forth. The policeman, seeing this behavior, understood what was the matter. Maybe it would be a river already, he would have decided that the boy had already moved through it. Or maybe, if he was more deceitful, he would have allowed the dog to swim to the edge of the ice, so that there, on the frozen layer of the river, look for fresh tracks. But the pursuer, apparently decided that the boy with fear clouded his mind, rushed into the river and drowned. So he swore loudly, turned around and headed back to the village.

... barely alive Fedya reached Aunt Vari's house. He was lucky - there were no fascists near this house. Aunt Varya hid the boy in his house - he, of course, could not return home: he fell into oblivion. Fedya miraculously survived. Inflammation of the lungs (although no one had diagnosed the diagnosis), he froze his arms and legs. He lay in a fever for many days, but somehow miraculously survived and even rose to his feet. And while I was sick, I did not know that a few days after this terrible day - December 6 1941, near the village of Apukhtino, Tebrunsky district, a fierce battle broke out. Our army, along with the partisans, drove the Germans out of the village. With this raid, the Yelets offensive operation began.

Fedya returned home. It was empty - Stepanida Egorovna was executed by the fascists. But the envelope, very important, as it turned out later, the envelope was delivered on time. He was not injured.

Terrible tests were not in vain. Fedor Ignatievich (in the photo he is the first on the left) lived a not very long life. For many years he treated the kidneys, which he hopelessly chilled in a cold river. He worked as a combine harvester in his native village and Terbuny, worked at the Novolipetsk Combine. And never, even in the strongest heat, did he bathe in the river.

Fedor Ivanovich Kolcheev died not so long ago, he lived to a great old age. Last years spent in Lipetsk, with their children. And this история occurred in the village Ekaterinovka Eletsky district. And also in the winter 1941 of the year. In general, most of the stories of boys and girls of the Lipetsk region occurred at this time or - in 1943 year. The fact is that the entire territory of the present Lipetsk region was not occupied, only a few districts (Volovsky, Terbunsky, Yeletsky, Stanovlyansky, Izmalkovsky, Dolgorukovsky). For the first time, the front began to approach Lipetsk in the autumn of 1941, when the fascists rushed to Yelets and were able to capture him in early December, but not for long (although the Germans staged bloody massacres and destruction during this time).

The second time the occupation happened in the summer of 1942, when the Nazis were advancing in the Voronezh direction. They occupied part of the Volovsky and Terbunsky districts, and this time - for seven months. The monsters finally drove away in January 1943. But back to the distant 1941 day of the year, in Ekaterinovka ...

... When they knocked quietly on the window, my mother gasped, making out in the winter gloom of strangers. And she went to open.
- Ivan? Kolya? - mom gasped, having recognized her former neighbors - the Astapov brothers in strangers.
- Hush! - whispered Ivan. - We are in the partisan detachment. Let go at night, Praskovia. Let's leave at dawn. Punish your son about not telling anyone about us. You can't hide from the boys - everyone will see everything, every little bit ...

And the son, twelve-year-old Fedya Kolcheev, was sitting at that time in another room and wept silently at the words of Uncle Vanya. He could not “see everything, everything, every little bit,” because even in the summer he was almost blind — he saw it very badly, although I read it somehow. But the boy was crying not only because of his illness, but also because he really wanted to help the partisans who had come to at least something, and he felt powerless.

The guests soon fell asleep, mother too. And Fedya did not sleep. He stopped crying - what's the use of tears! Almost to the touch I got to the chest in which my mother kept clothes, threads and needles. I found my new shirt - I recognized it by large round buttons. He took out the scissors, pricked himself painfully on needles, was delighted - already with thread lengths! The fact is that mom always in advance threaded long threads into needles. First of all. In the hot moment, when you need something to quickly sew up, do not waste precious time or light a candle, if it's in the evening. And secondly, Fedya from an early age dreamed of becoming a tailor. And even though now I almost did not have the opportunity to sew, but I often took up needles, trying to make something.

Fedya folded his shirt in half and cut it, halved each half, then another. In the dark, he felt the fabric, folded the squares so that it turned out exactly, measured them according to his famous signs. And ... he began to sew guerrilla pouches.

I did not light a candle, so as not to wake my mother and guests. Yes, and it was a pity to spend precious stubs - and so they were in the house in vain.

Soon the fingers were swollen, punctured by a needle. Frequently, like a wave of ice, Fyodor rolled in fear: well, how can he not, sew badly, not enough thread, and not be able to get a new one? But rolled - and released.

... It was barely dawn, the Astapov brothers began to pack up. Mother poured them hot soup. And she almost screamed when she saw three pouches on the table. They were sewn with threads of different colors - Fedya could not see it. On one pouch there was a large round button.

- Here is a guy! - whistled Ivan. - And she said that she was almost blind! Look, what a beauty for the night sewed! That's really telling the truth that one should see not with the eyes, but with the heart. Come on, Fedka, get out of the room, I will tell the soldiers thanks!

But Fedka did not come out - he was fast asleep. And although his face was very tired, but very calm and peaceful.