The era of oil Colonel Shpakovsky 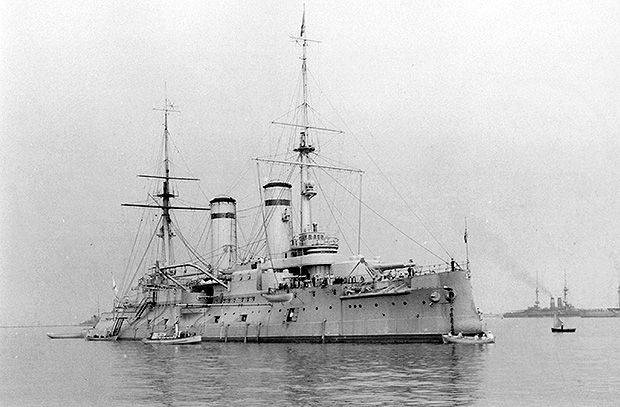 The first message for the 1866 year reflected in the activities of the Imperial Russian Technical Society (IRTO) is a message from October 29 A.I. Shpakovsky - on the application of spraying to the heating of steam boilers.

Alexander Ilyich Shpakovsky, one of the most outstanding Russian engineers of the XIX century, was a professional military man. Born in 1823 in an impoverished noble family, he entered the grenadier regiment in 17 years. Over 30 years Shpakovsky gave military service, combining it with a passion for mathematics, physics and chemistry. 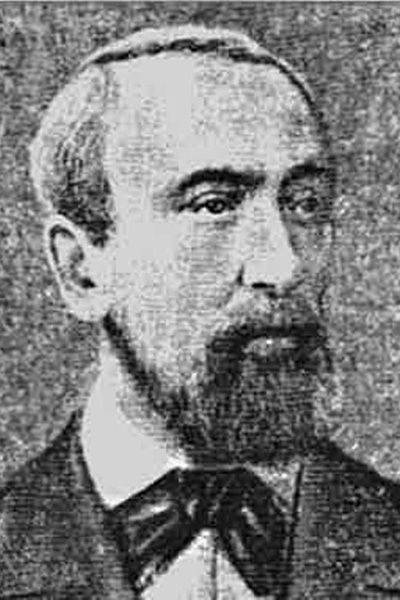 Alexander Ilyich Shpakovsky. Photo: stereoscop.ru
A competent officer was sent as a teacher to Pavlovsky Cadet Corps, one of the centers for training future officers in St. Petersburg. The teaching work was successfully combined with experiments in the field of newly born photography and electrical engineering. In particular, in 1856, ten "electric suns", the light bulb of the Shpakovsky design, were used to illuminate the coronation celebrations of Emperor Alexander II.

At the same time as electrical engineering, Shpakovsky was engaged in the creation of non-electric lighting systems for marine fleet. Back in 1866, he designed a signal lamp - a pulverized jet of turpentine was supplied under pressure with a pump under the pressure of an alcohol. This “flashing light” provided far-visible flashes of flame that were easy to control.

It is the effect of pulverization in the signal device that prompted the inventor Shpakovsky to the idea that this phenomenon can be successfully used in steam engines. After all, spraying, that is, spraying, mixing a jet of liquid fuel with oxygen from the air, increases the burning effect and dramatically increases the efficiency of the fuel being burned. 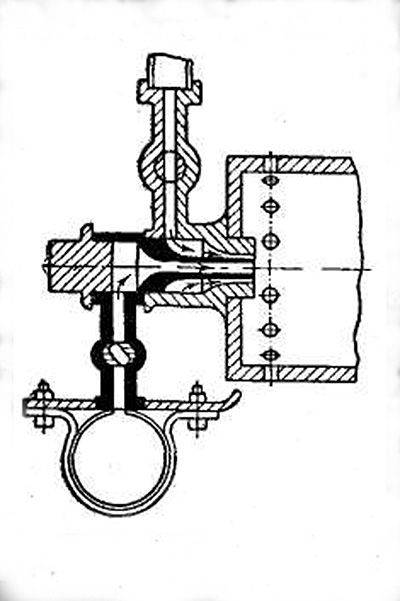 Nozzle A.I. Shpakovsky for burning liquid fuel. Photo: studfiles.ru
As Shpakovsky himself wrote: “The thought came to me to use pulverization to apply it to the furnace of the boilers” (“Notes of the Russian Technical Society”, 1867 year, issue II). For the experiments, the inventor has built a working model of a screw steamboat with a boiler heated by a “turpentine flame” that is being sprayed. After a series of experiments, Shpakovsky created the first “steam nozzle” in the world for 1866, which allowed the steam boiler to operate not with hard coal, but with liquid fuel.

Ideas to use in the steam engine liquid fuel, in particular oil, and previously put forward by European and American inventors. But all the proposed mechanisms were imperfect, only Shpakovsky was able to propose the idea of ​​spraying that dramatically increase efficiency and create a successful design of such an engine, which was much easier and more efficient than a conventional coal-fired steam boiler. As Shpakovsky himself described the achieved effect in the terminology of the 19th century: “Saving space, gaining weight and reducing the room for fuel ...” (Notes of the Russian Technical Society, 1867 year, issue II).

To demonstrate the effectiveness of his invention, Shpakovsky at his own expense created two “fire locomobiles” for St. Petersburg — steam boilers working on turpentine, which set in motion water fire pumps. These lightweight, fast-moving structures were successfully used to extinguish the fire. So, in 1868, on one of the fires in St. Petersburg, two Shpakovsky automatic pumps worked, pumping water, without a break for three days - according to the estimates of metropolitan merchants, by spending turpentine on 400 rubles, Shpakovsky’s invention saved several millions of goods. 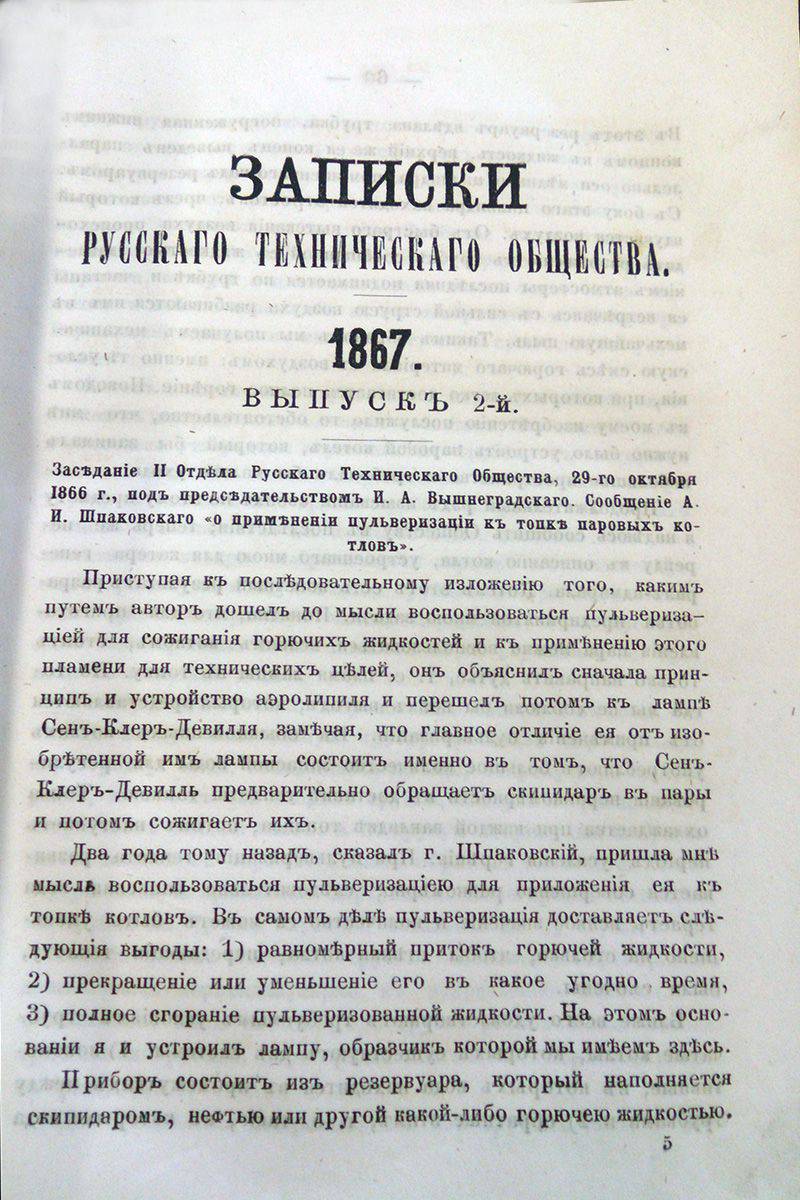 In 1866, in the fleet magazine “Morskoi Sbornik”, an article was published by Lieutenant Colonel Shpakovsky “Comparative Evaluation of the Steam-Fired Boiler’s Furnace with Coal, Turpentine and Oil”, in which the inventor argued that oil is much more convenient and profitable for steam furnaces than coal. The following year, in the journal “Notes of the Imperial Russian Technical Society” appears the final article of Shpakovsky “On the application of spraying to the heating of steam pipes”. In 1870, on the instructions of the Russian Technical Society, Alexander Ilyich Shpakovsky, who had already received the rank of colonel, lectured on his invention at the All-Russian manufactory exhibition, where the latest achievements of the domestic industry were then demonstrated.

So the Russian colonel was the first in the world to substantiate and create a working mechanism using liquid fuel. Already in the 1870 year, steam vessels of the Volga and Caspian flotillas were equipped with Shpakovsky steam nozzles. It was there that there was a lot of cheap oil from Baku, which made this invention particularly advantageous, to which Shpakovsky himself had previously given an economic rationale on the pages of the Notes of the Russian Technical Society (issue II for 1867 year). “For the Caspian and Black Seas,” the inventor wrote, “where a pound of oil costs 30 cop., And a pound of coal, such as Don anthracite, costs 40 cop., This furnace will be economically profitable, since 1 will replace oil pud of oil more than 1 pood coal. "

In the fleet, Shpakovsky’s invention over time allowed us to abandon many stokers and heavy manual labor in moving many tons of coal to steam fireboxes. As he wrote, looking into the future, Alexander Ilyich himself as far back as 1867 year: “I happened to hear the views of sailors who consider it inappropriate to use people where their work can be replaced with a machine ...” (Notes of the Russian Technical Society, 1867 release ii).

In fact, it was Alexander Shpakovsky who opened the era of using liquid fuels and oil products as a fuel for engines on our planet.

In the 1880 year, when the Electrotechnical Department of the Imperial Russian Technical Society was created, Alexander Shpakovsky was elected an “indispensable member”, as the members of the board of the IRT were then called.

Ctrl Enter
Noticed oshЫbku Highlight text and press. Ctrl + Enter
We are
Keys and swords of "Beelzebubs". From the history of the Corps of Mechanical EngineersMr Mercury. Ilya Ilyich Mechnikov
Military Reviewin Yandex News
Military Reviewin Google News
4 comments
Information
Dear reader, to leave comments on the publication, you must to register.