Notes of the Colorado Cockroach. In the hospital named after Comrade Pavlov

November 17 2015
31
For a long, long time did not write anything for you. Not because there was nothing to write. Not even because something happened to me personally. Just felt that you, dear readers, were tired. Tired of me, tired of my country, tired of our stupidity. And the topic appeared hotter - Syria. I'm not mad. I get tired periodically. Even professional psychiatrists periodically go on vacation. But they still come back. Here I am back. 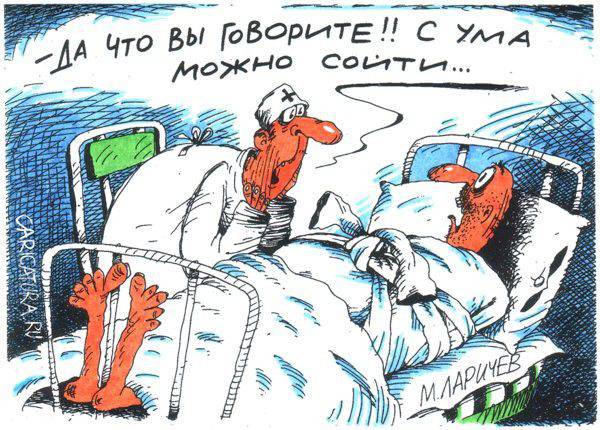 During the days that have passed since our last meeting, we have happened a lot of events. Not great, not very prominent from the outside, but events. What follows them is not very clear. But the fact that the consequences will be visible even from under the carpet.

I will begin, probably, with the most significant. The famous Right Sector was left without a head. Not. There was no action or flash mob for chopping heads off activists. Revolutionaries, they are people too. Understand that if the body to deprive the head, then through what then is? On the head is the mouth! Therefore I will explain. The head is not where our mouth is. Our head is the one who through his mouth voices all the ideas of the organization. Who stands with a flag on a barrel at rallies and shouts out slogans. Well, like football fans.

The right sector "chopped off" Yarosh himself. The very one under whose leadership his fighters created a name for themselves in this revolution. The one who became the symbol of the struggle. Exactly the same as Trotsky was in Russia a hundred years ago. Yarosh did not want to "be a wedding general." True, pravoseki themselves say a little differently. But who to believe now, in our times?

November 8 near Kiev hosted a PS conference. On which they accepted the resignation of Yarosh. “After the conference, individuals guided by mercantile interests, ambitions and, possibly, ties with the special services, did everything to set Yarosh to reject the decisions of the conference and reject the revolutionary strategy. This circle of people matured long ago in the ranks of the movement, and resorting to sycophancy and intrigue , spreading gossip, tried to influence his policies. It was the activities of these individuals that led to a situation in which Yarosh was forced to resign. "

I can not boast of personal acquaintance with this man. But for me it is very similar to the other, already on the other side of the front. On Brain. Imagine how some readers frowned. Bent a cockroach. Maybe he bent, only the cockroach has a brain. And your opinion is.

Both Brainstorming and Yarosh are the essence of the education of the post-Soviet environment. Both romantics to the bone. Both are charismatic. Both leaders are from God. Even the goals of both were the same. They wanted to build a new Ukrainian state. Build a state for the people. And for this we used all the possibilities. Including support for the forces against which they were going to fight. The only difference is that for Alexey the Brain the state was supposed to be nationwide. He did not really bother with nationality. People are those who live in this state. Regardless of the language, family life, traditions. Such a Cossack village, where everyone is equal and everything is decided by the will of all.

For Dmitry Yarosh, all other things being equal, the state should have become Ukrainian. Those. Ukrainization of one and all. Not violent, but by the type of Russia. People themselves, little by little, would become Ukrainians. Well, with some small differences. As in Russia. Northern Russian blondes are mostly or there, brown-haired, and southern blondes are brunettes. With a different way of life, a slightly different language, different national clothes. But they are all Russian. And the state proudly call their homeland.

I do not know the future fate of Yarosh. But the fact that with his departure the goals and objectives of the PS will change, obviously. How to change - the question. The answer to which we will receive very soon.

But back to our sheep. I did not quote this famous judge from an ancient parable. This is me about our leaders. Those who with persistence worthy of another application leads the country to the abyss.

Ukraine on the verge of bankruptcy. True, for a long time. Everyone got used to it. But yesterday, the first time one of the agencies declared the first bankrupt. They became the capital city of Kiev.

"The international rating agency Fitch downgraded the long-term rating of Kiev to the default level" D ".

Our mayor with his brain recaptured in many boxing fights has managed to collect credits worth as much as half a billion dollars. City budget seems to be filled. Dirt was removed in the central streets. Something built. Only here the credits differ from the handouts in that it is necessary to give them back. With what? Of course, you can, like an old woman from a Russian folk tale "scrape the bottom of the barrel". Only there you can not scrape the flour on the "bun". I mean, there's no money back there.

With the filing of our rabbit, the Kiev Rada, however, attempted to overtake creditors. Like, and let us give you later ... Well, just then. Someday. Yes, and cut the interest. Or maybe the debt itself will be reduced. Percent so on xnumx. For some reason, only the lenders sent the Kiev authorities somewhere ... to the female body. So, it will be necessary to give. 25 millions have not given away. And there are still 250 millions ahead. Zrada, however.

It was even funnier with electricity. How many embroideries are torn on the chest of all our leaders in the fuel and energy sector. Peremoga! We will no longer buy Russian electrons! We are patriotic on the wire run. There is nowhere to go. So, let the country-aggressor and their leaves. We do not need these fascist. That's all! From November 11 and cut the wires!

“The Minister (Vladimir Demchishin) stated that Ukraine receives electricity imports on the basis of the closing principle (ed. - importing in case of a shortage of its own capacities). At the same time, he admitted:“ We have many capacities that are not used, for example, DTEK does not have unloaded blocks on 2 gigawatts. On Wednesday, we will stop receiving any electricity from Russia. This is a technological step. "

But this unfortunate 11 came on November. Why? But who knows. According to the calendar like. Electricians in orderly rows with tongs stand across the line. Gas cuttings are buzzing with fire from gas produced in Ukraine. So that means, quickly dump the pillars and pass on the scrap metal. "KrAZ" roar on diesel like from Europe. And bang ...

"Today, 11 in November, Ukraine imports 800 MW of Russian electricity. Yesterday, imports increased from 400 MW to 800 MW. Tomorrow, 12 in November, it is planned to purchase more 400 MW from Russia."

Again zrada. Probably, the Russian electrons are some particularly strong. Like sperm. Our not allowed in the wires. Or are we simply not there? I do not know. I sit here, I look, as the aggressive light from the office of "my" deputy makes its way through a gap in the floor, and I don’t know what to think.

Well at least we have real patriots. True, with passports of other countries. So what? Patriotism is not dependent on a passport. Here, for example, Aivaras Abromavicius, Minister of Economic Development and Trade of Ukraine. One word - well done. He now has an interesting challenge. It is necessary so to tell the people about Peremog in connection with the embargo of Russia for the supply of some Ukrainian goods, so that the people become proud and even more actively wait for the final economic collapse of Russia. With popcorn and pepsi-cola on TV.

"We see how unpredictable trade partner Russia is. They calculated the effect of a potential embargo: further sanctions against us will hit the Russians themselves more. Therefore, the expected effect from Russia’s further non-friendly relations is beginning to be minimal."

Scared? Or did not understand? Yes, it does not matter. The main thing in the last sentence. You will be worse. True, it is not clear why. So we have a lot of things are not clear.

Hooked? Now I will open my eyes even more. To tears wash them after sleep. Let me remind you that Russia is preparing another humanitarian convoy - 44. For residents of Lugansk and Donetsk regions. By the way, many still do not understand why they are so privileged. In other areas, too, not sugar. I also want to eat.

So, in this convoy will be over 100 cars. Going to deliver 1,1 thousands of tons of cargo. Well, where so much? That is because the vile Russians want the inhabitants of these areas to suffer from obesity. But it is theoretically. We do not doze. More precisely, our border guards. They, like us, see everything!

“As reported by the State Border Service of Ukraine, one of the previous columns of the Russian“ humanitarian convoys ”entered the Donbass half empty. In addition, the Russian side carries out clearance of cargoes unilaterally and in violation of international norms.”

That's it. Russians drive empty wagons back and forth and say they carry cargo. And the cargo, probably, is being dragged across the border at night along animal tracks. There is no other explanation for where all of this Donbas comes from. Our anger even stopped building a wall. What's the point? Russians may come up with some jumping trucks. Once - and jumped fence. Like a locust.

Well, the last news about our peremog. People's. You know that those who fight are sometimes injured, which leads to amputation of the limbs. War is a cripple production line. Sad theme. So, in the city of Lviv, people solved this problem. No, they did not stand near the administration with posters or did not begin to collect money for artificial limbs. Everything is easier.

"In Lviv, in the framework of the campaign to help the ATO fighters, they collected more than a ton of plastic caps. For the money collected, volunteers buy prostheses for war invalids. For one artificial limb, which costs from 6 thousands of euros, we need to collect approximately 750 thousands of caps," Zaxid.net reports .

Here the Russian brain will never think of it. A Ukrainian can. Ukrainians in general, after digging up the Black Sea, became the smartest nation in the world.

But in general, in our psychiatric hospital, everything remains the same. The patient, more precisely, the patient, is connected to the apparatus of an artificial kidney, heart, lungs, and all other organs. Pumps drive artificial blood, the computer replaces the brain. Everything is artificial. And everyone is waiting with horror when electricity and gas will be cut off for non-payment. Then all these devices will be covered with a copper basin. And the fact that it was once proudly called Ukraine will be food for the scavengers already gathered around ...

Ctrl Enter
Noticed oshЫbku Highlight text and press. Ctrl + Enter
We are
Notes of the Colorado Cockroach. Between Christmas and Baptism ... chillyNotes of the Colorado Cockroach. Part of 14. Tse Europe!
Military Reviewin Yandex News
Military Reviewin Google News
31 comment
Information
Dear reader, to leave comments on the publication, you must to register.