November 12 2015
152
If recently the economy systematically has the topic of justification by federal officials (from the Ministry of Finance to the Ministry of Health) of the need to raise the retirement age, that is, its "skeleton in the closet" and in the scientific community. Speech in this case is about periodically pop up in the media statements of various scholars about the impending or already existing global warming. Publications appear that claim that 30-40 will pass through the years, and the planet Earth will either turn into a lifeless desert, or it will be swallowed up by huge volumes of water from melting glaciers. In general, scientists paint apocalyptic scenarios, and it is already difficult to give a definite answer: does Hollywood use these scripts of scientists as a basis for their disaster films, or scientists, having seen enough Hollywood films, are taken as a pen? ..


It should be noted that apocalyptic forecasts and scenarios usually distinguished foreign scientists - primarily Western. However, during the week, domestic scientists already appeared with rather unexpected information. So, the news agency TASS published an interview with the Acting Director of the Earth Cryosphere Institute of the Siberian Branch of the Russian Academy of Sciences, Doctor of Geological and Mineralogical Sciences Dmitry Drozdov. Dr. Drozdov told the TASS correspondent that the Russian territory is constantly ... decreasing.

After such a statement, some ladies and gentlemen plunged into news ribbons with the purpose of finding out to whom, when and how many square kilometers of their native land Russia donated or lent out indefinitely, but nothing similar was found in the news feeds by the ladies and gentlemen. As it turned out, Dr. Drozdov does not mean territorial and water-related gifts to foreign countries, but a process of a natural nature.

If you believe Dmitry Drozdov, then every year the territory of the Russian Federation is reduced by about 500 square kilometers due to melting permafrost and blurring of the coastline of the seas of the Arctic Ocean. 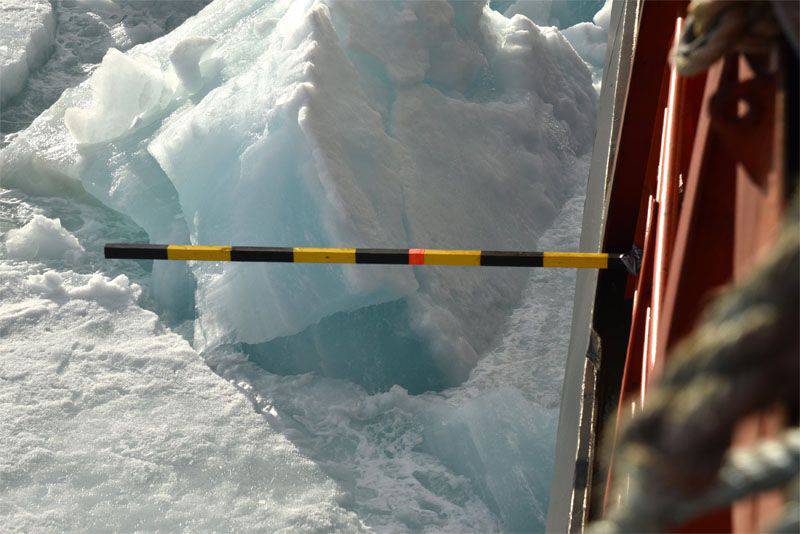 TASS quotes Dmitry Drozdov:
We are losing a year due to the thawing of permafrost in the coastal zone of the northern seas, somewhere from the territory of Andorra. The shores are also eroding in the south, but in the north they are eroding much faster. How does this happen? The wave hits the permafrost soil, transfers heat, and this soil thaws. In the south, if the coast has collapsed, sand lies, "protecting" the coast from further erosion. And here, since there is a lot of ice in the ground (up to 80%), nothing remains, and the wave hits the next segment of the ground. This is a natural process, an inevitable process. Remember the legends about the Land of Sannikov. Today there are several assumptions about where this land could be. Now, where the shore is washed away, shoals are formed, where the depth is a meter or two. And 150 years ago it was an island, people could live there.

According to Dr. Drozdov, the southern line of permafrost in Russia has shifted by about 30 km in 40 years, which, according to him, indicates a certain mitigation of climate on a global scale.

The scientist’s statement must have made a wry face somewhere in Yakutsk, where the climate is “mild” so much that, according to the weather forecast, the next night is expected to be minus 30 ... In the Sakha Republic, it is possible that they are happy with “global warming” and sea ​​waves, which, it turns out, melt the coastal ice, but the wishes of the inhabitants of Yakutia and the possibilities of nature do not coincide yet ...

On the Net, based on data from a scientist at the Institute of Earth's Cryosphere, it has already been calculated that all the territorial acquisitions of Russia associated with reunification with the Crimea, due to the melting of the Arctic ice, will disappear through 54 of the year, taking into account the area of ​​the Crimea ... Others have already counted that RF losses in Andorrach are one unit, then in some San Marino losses amount to already whole 8 units. And if you count in the Vaticans, the territorial decline is altogether colossal ...

In general, Dr. Drozdov gave people food for thought, because there is nothing more entertaining for an idle individual than to calculate how much Liechtenstein or Monaco annually loses the territory of the Russian Federation.

In the meantime, territorial losses in Russia were considered due to the wave of the sea wave, a new report was submitted to the World Bank, which tells how many new poor people will appear in the world as a result of “global warming”. Global what? - again asked somewhere in the Neryungri area. Global warming, - with a serious look answered them in the World Bank.

According to the calculations of the World Bank, by the year 2030 the number of people who will fall below the poverty line in the world will be approximately 100 million more. Identified and risk zones - countries in South and Northeast Africa, Central and South Asia. At the same time, the main factor in the impoverishment of the population is desertification of land, lack of fresh water and, as a result, regional problems with agriculture, which threaten to grow into global ones.

Russian experts immediately stated that global warming is a big plus for Russia. They say, well, let them flood the "bear corners" of the Arctic, but somewhere in Karelia it will already be possible to grow sunflower on an industrial scale, and near Saratov - and even switch to oranges and mango ... Radical optimists once again said that with such- then, they say, the development of events, we (Russia), even if having lost a couple of tens of Andorr, we will overwhelm the world markets with our pineapples and papaya, not to mention the additional volumes of grain and legumes ...

Reflections on the topic of “global warming” and its advantages for Russia look, of course, entertaining, but in many respects these reflections resemble something from the series, in what year communism will be built, and when the decaying West will finally rot… In the areas of arable land, with those unique natural components of dozens of Russian regions, it is too much to rely on some kind of warming. And assertions that we’ll wait for 15 years later, and then as “fill up with Sakhalin mandarinamias,” as “feed the Tver pineapples,” the whole world looks, I'm sorry, with a clinic. Clinically, if only because our country and now (with warming or without warming, with violent waves or without them), the potential for becoming a true giant of the world food market is truly inexhaustible.

But while someone seriously ponders about the “imminent” establishment of subarctic tea plantations, we continue to buy fish at an astronomical price in Chile and Thailand, continue to import potatoes from Turkey and Israel, rejoice that the import of beef was not made through its purchases in France, and in Argentina ... Perhaps, it is better to attend to the problems of today, rather than rely on natural manna from heaven, "expected" by scientists in 15-20 years. What kind of what, and our country is endowed with such manna by ancestors (from lands to natural resources hidden in them), envy about which has not been weathered from the heads of our "partners" for centuries ...

Ctrl Enter
Noticed oshЫbku Highlight text and press. Ctrl + Enter
We are
Children of Donbass write letters to the front and draw a peaceful cityRaising the retirement age. Forced measure for the development of the economy or a threat to the social order of the country?
Military Reviewin Yandex News
Military Reviewin Google News
152 comments
Information
Dear reader, to leave comments on the publication, you must sign in.