November 11 2015
6
Negotiations at the highest level of Chinese President Xi Jinping and President of Taiwan Ma Ying-jeou did not bring any tangible political results. In addition to the symbolic handshake, they are generally remarkable more by the fact of their conduct than by any significant results. If you look at the reports “from the field” unbiasedly, then it will become clear that the meeting emphasized the differences more than the commonality of the two states. The leaders treated each other cautiously, and the PRC press in every way avoided calling Ma Ying-jeou head of state. 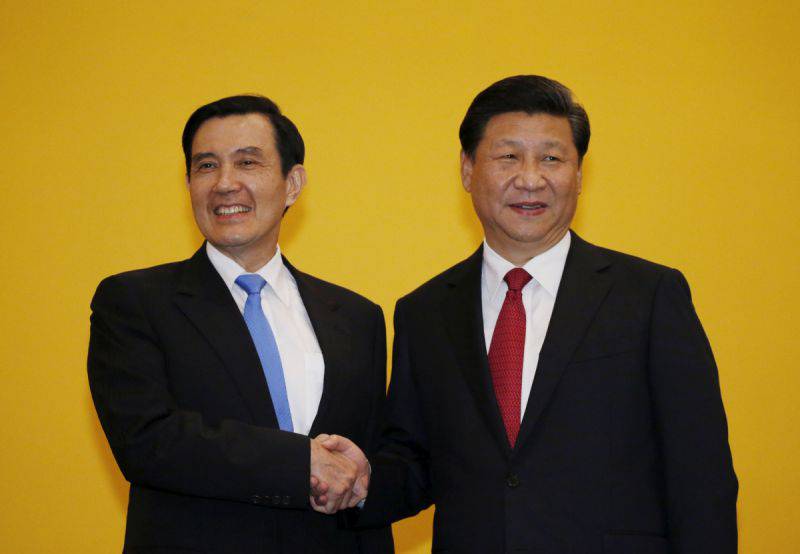 Geographically close Taiwan is still infinitely far from the continent politically. This is mainly due to the fact that neither the elite of the island nor the population see for themselves a future as part of a friendly family of peoples of the People’s Republic of China. The example of Hong Kong, where autonomy rights are regularly violated, does not inspire anyone in Taiwan, let alone that the memories of the civil war and the three post-war armed crises in the strait lay firmly between the two banks. Despite the relatively conciliatory rhetoric, the island republic continues to drift towards the United States and emphasizes its complete autonomy from the continent at every opportunity. In particular, Taiwan has long shown an interest in the Trans-Pacific Partnership, although it is not at all a fact that the unrecognized republic will be accepted into it. The armed forces continue to modernize, while the pro-independence bloc, the Democratic Progressive Party (DPP), enjoys broad popular support and will undoubtedly win the next elections, while the Kuomintang party, which includes President Ma Ying-jeou, is rapidly losing popularity among the people its propecian position.

As for the USA, the current status quo suits them completely, since even the peaceful accession of Taiwan to mainland China is considered unacceptable. Such an event will radically change the balance of power in the western part of the Pacific Ocean - this is not only a convenient springboard, but also the unification of two very powerful fleets. It makes sense to mention the important Japanese factor. A possible transition of Taiwan under the sovereignty of the PRC immediately puts Tokyo in front of a direct military threat, and Japan will be forced to take retaliatory measures, since its southern islands will be at a range of shots from the Chinese MLRS.

If we talk about today's day, now China is pursuing purely practical goals. Against the backdrop of the dizzying take-off of the American Trans-Pacific Partnership, Beijing seeks to show that its only integration project in the region, “One Country - Two Systems”, is also quite viable. Show first of all to own population, in the second - to the world community. If this is not done, the first unbiased analysis will reveal an unpleasant thing: the United States completely outplayed China from its own shores. A special bitterness to the pill is given by the fact that the Celestial Empire came to such a result under the strict guidance of its own leaders. Economic dictation and unlimited territorial claims turned away many potential allies from China. Beijing can’t give up claims that were voiced during Mao’s time. At the same time, the intensification of border disputes leads to a tightening of the geopolitical blockade around the Celestial Empire. The situation could have been saved by the refusal of at least part of the claims, but obviously, the Chinese leadership does not even consider this option.

The main difference between Taiwan and Hong Kong and Macao (as well as, if you will, from the island of Big Ussuri) is that he decides his own destiny, without giving up such an important question to the mercy of the metropolis. That is, he has subjectivity. Another difference is that possessing subjectivity, Taiwan has geographic and military capabilities to defend this very subjectivity. Hong Kong did not have such a choice from the beginning. In the eighties, when the fate of the colony was decided at the bilateral talks, the British had no opportunity to defend their overseas possession - the Falklands War clearly showed the limits of their forces, and China unequivocally threatened military invasion if the issue was not resolved in his favor.

In relations between the People's Republic of China and the Republic of China (Taiwan), even more antagonism is now traced than between the PRC and Japan. The population of the island, almost a hundred and twenty years separated from the rest of China, does not want to have historical homeland, nothing in common and culturally much closer to Japan and South Korea than to continental counterparts. Taiwanese highly value their standard of living and personal freedoms, so any political force advocating integration into the PRC here is actually doomed to exist as a marginal entity. In such circumstances, the only way to unification is a war with the creation of a thousand-kilometer front from northern Taiwan to the Spratly Islands, some of which control Taipei. But before 2020, such a conflict should not be expected, unless, of course, some event occurs that can break any forecasts.

Ctrl Enter
Noticed oshЫbku Highlight text and press. Ctrl + Enter
We are
Kinmen: an outpost of Taiwan off the coast of the PRCThe global crisis and the “yellow threat” led to the arms race of the countries of the Asia-Pacific Region. Part of 3
Military Reviewin Yandex News
Military Reviewin Google News
6 comments
Information
Dear reader, to leave comments on the publication, you must to register.