November 11 2015
24
On Monday, the Parliament of Catalonia approved a resolution endorsing the "process of creating an independent state." The Catalans are set to become independent from Spain by 2017. The “road map” of supporters of independence is clearly defined steps: to form state structures and develop a constitution. It also indicates that the Parliament of Catalonia will not obey the Spanish government institutions. Parliamentarians are seriously talking about the imminent creation of a “just” Catalan Republic. 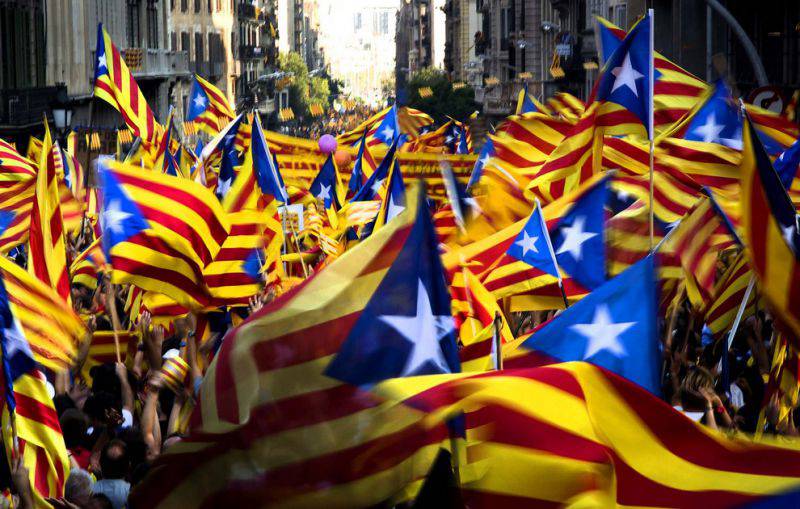 On November 9, the Catalan Parliament approved a resolution proclaiming the beginning of separation from Spain and the creation of a new state (republic). The resolution was adopted in heated debates: 63 parliamentarians opposed its adoption, 72 MP supported it.

The implementation of the plan outlined in the document should begin in the next thirty days with the creation of bills for separation from Spain and ensuring the security of the process.

As for the reaction of the Government of Spain, it declared in the Constitutional Court that it would challenge the decision of the Catalan Parliament to establish an independent state. This was stated by the Spanish Prime Minister Mariano Rajoy, reported "Vesti.Ekonomika" with reference to western sources.

Last week, the Spanish Constitutional Court rejected a statement by opponents of the separation of Catalonia: they demanded that the provincial parliament be banned from discussing and voting on the resolution on independence. However, the judges decided that it would not be possible to prohibit the discussion, having declared it illegal in advance. The resolution can be adopted, and then the government will be able to challenge it in the same Constitutional Court.

The Constitutional Court is expected to consider the resolution and prohibit the enforcement of provisions that violate Spanish law. Such a decision can be easily predicted on the basis of previous court decisions. As reminded "Vedomosti", in November last year, a survey was conducted in Catalonia, in which 2,25 million people participated. of 5,4 million, residing in the province and eligible to vote. A positive answer to both questions (“Do you want Catalonia to become a state?” And, if so, then “Do you want this state to be independent?”) Gave 80,72% of respondents. 10,11% were in favor of statehood without independence. For the preservation of the current order favored 4,55%. In June 2015, the Spanish Constitutional Court declared the 2014 poll unlawful.

Europe and the United States do not welcome the Catalan decision. Spanish Prime Minister Mariano Rahoy noted earlier that the world community, in particular German Chancellor Angela Merkel, British Prime Minister David Cameron and US President Barack Obama, spoke out against the split of Spain. Mariano Rajoy himself, reminds "Expert", he said more than once that he would not allow "the elimination of Spain as a single state." According to him, "the law will be respected in the country." In the case of a decision on independence by Catalonia, the prime minister promised that such a decision "will be immediately appealed to the Constitutional Court and accordingly annulled as contrary to the constitution."

In the Parliament of Catalonia, where the idea of ​​secession from Spain won, the mood is different.

“This is an opportunity to start creating a modern and fair state,” the newspaper quotes "Sight" parliamentary representative of the coalition “Together for yes” (Junts pel Si) Raul Romevu.

“The time has come to write a new chapter in stories of this country. Today is a day of breaking with the regime that buries our dreams and legality, ”said Anna Gabrielle, representative of the Party“ Candidacy of the People’s Unity ”(CUP), echoes him.

However, there is opposition in parliament. Members of the People’s Party (the ruling party in the rest of Spain) voted against the resolution.

“Do you really think that the majority of the Catalans support this separatist process?” Asked the representative of this party, Javier García Albiol. According to him, the resolution is "an operation for the personal and collective salvation of Mr. Arthur Mas." Thereby he hinted at the scandals around the leader of the separatists and the chairman of the government of autonomy A. Mas, who is suspected of corruption.

Alexander Chichin, an associate professor at the Russian Academy of National Economy and Public Administration, an expert on Spain, believes that the resolution introduces a revolutionary situation in Catalonia. Premier Rahoy failed to act in advance. “The Constitutional Court recognizes all this as unenforceable, but the Catalan Parliament has already warned that it will not obey any legal decisions of the Madrid authorities,” the expert told Vzglyad. “Now Catalonia is already outside the zone of Spanish jurisdiction.” And it goes to acts of disobedience on the part of Barcelona.

There is a different opinion. The scientific director of the German-Russian Forum, Alexander Rahr, is convinced that the Catalans will change their mind when Brussels intervenes in the conflict. “Obviously, the Catalans want to leave Spain, there are no questions here,” the political analyst told the publication. - But do they want to leave the European Union? It is impossible to leave Spain and remain in the EU. The European Union will intervene. It is absolutely obvious. He will do everything to show the economic, financial, political and social advantages of being in the union. If some kind of minimal destabilization occurs, Madrid will not act alone. ”

Similar examples of preservation in the state of oscillating territories are in recent history. “For example, Scotland, precisely because of the subsidies, the EU decided to remain in the UK,” the expert reminded. - At the moment I do not see any attempts to forcibly secede from Spain. This is a political desire, but not a forceful one. The only option when separatist sentiment will intensify is if the EU is overwhelmed by a monstrous economic crisis. In Europe, there is a separatist sentiment not only in Scotland, but also in Tyrol (Italy), for example. Or Basques in the same Spain. Some even created terrorist organizations. But I predict that Spain will avoid radicalization. ”

But Chichin believes that a new phase of confrontation is possible already this week. “They will try themselves as a new state,” the expert told the publication. - Mas promised to adopt a new constitution within a year and a half. He has nowhere to retreat. If not him, then it will be done by someone else, so Mas will go to the end. Whereas in Madrid there is no that figure that would unite everyone. ” And it will remain "only sympathize with Spain, which can begin to crumble like a house of cards."

Pretty bold prediction, add on my own. First of all, neither Madrid, nor Brussels will allow Catalonia to break away. The tools of suggestion will be used very different - from the recognition of the decisions of the Parliament of Catalonia as illegal (contrary to the Spanish constitution) to the "weaning" of the new state from the European Union.

Secondly, in Catalonia, the opposition is quite strong in favor of “united Spain”. Recently, the leaders of two Catalan banks, which are included in the elite top five financial organizations in Spain, said they did not support the idea of ​​independence of Catalonia. The statement of two bankers, notes IA "REGNUM", in fact, is a demonstration of the position of the entire Spanish banking sector in relation to the separatist aspirations of Arthur Mas. (It’s not by chance that supporters of separation from Spain think so intensely about “ensuring the security of the process.” One of the security components of the “just state” is just financial.)

Thirdly, in the Parliament of Catalonia there are a lot of opponents of the department (the 63 member of the parliament was against the adoption of the resolution), who will certainly put bites in the wheels of the separatists.

How would Catalonia itself do not split!

Observed and commented on Oleg Chuvakin
- especially for topwar.ru
Ctrl Enter
Noticed oshЫbku Highlight text and press. Ctrl + Enter
We are
Results of the week. “Annushka has already bought sunflower oil, and not only bought it, but even poured it”Europe's Disintegration: Are National States Waiting for Disintegration?
Military Reviewin Yandex News
Military Reviewin Google News
24 comments
Information
Dear reader, to leave comments on the publication, you must to register.