Crimea and the double standards of the West ("Telesur TV", Venezuela) 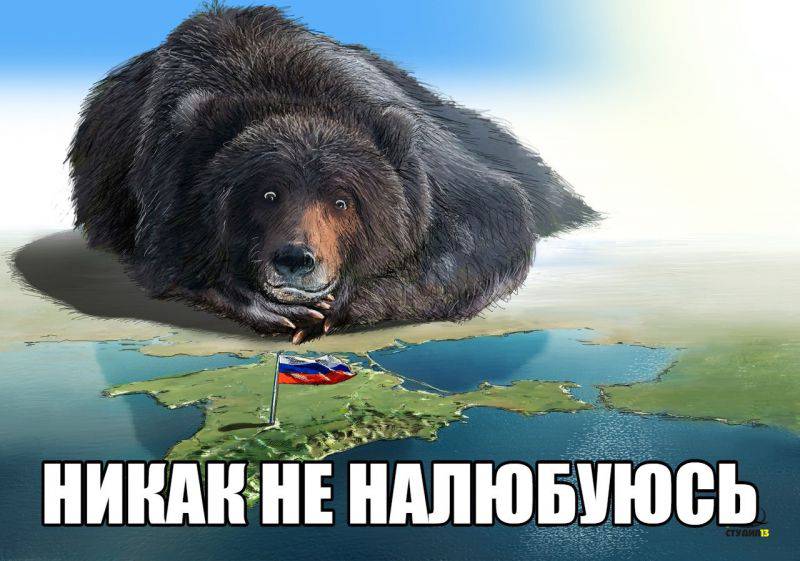 Western media in the service of big business tried to do everything possible and impossible to hide the true reasons for the coup d'état that took place in Ukraine in February 2014 with the blessing of the United States and the European Union.

Only thanks to the local and regional media of the Eurasian region, we are able to find out the truth about the causes of coups, political, economic and social crises in countries that have been the victims of Western intervention in internal affairs.

The United States and its allies collude against Russia

The United States and its allies continue to follow the well-known principle of "fishing in troubled waters."

An example of this is the "Arab Spring", when Tunisia, Egypt, Libya and Syria were embroiled in political, economic and social chaos.

The West does not spare funds for the supply of weapons to terrorists, whom it calls "rebels", as, for example, in Syria. The United States, helping international terrorists, seeks to weaken Russia both economically and geopolitically.

Take, for example, the stubborn desire of the United States to continue to deploy a controversial antimissile shield in Europe, ostensibly to repel a hypothetical attack from Iran. And this is being done, despite the recent achievement of a historic agreement on Iran’s nuclear program, when the 5 + 1 Group (Russia, USA, France, UK, China plus Germany) after many years of tense negotiations managed to close this issue.

It is noteworthy that this agreement, concluded last July in Vienna, is called the “Joint Comprehensive Action Plan” and provides for the complete abolition of the economic and financial sanctions imposed by the UN Security Council, the United States and the EU against Tehran.

The consequences of the Arab spring, the deployment of missile defense in Europe, the conflicts between North Korea and South Korea, China and Japan were used as a smoke screen for the US and the EU to achieve their goals in Ukraine.

The decision of President of Ukraine Viktor Yanukovych to postpone the signing of an association and free trade agreement with the EU has become a kind of detonator for the political and economic crisis in Ukraine.

Starting from 21 in November 2013, the Independence Square (Independence Square), located in the center of Kiev, becomes a battleground between the police and protesters, unhappy with the decision of Yanukovych.

As expected, American and European politicians, as well as media controlled by them, accused the Ukrainian authorities of violating human rights and solidarized with the protesters, demanding the resignation of President Yanukovych and the continuation of Ukraine’s integration with the EU.

The leaders of the German and Canadian foreign ministries, Guido Westerwelle and John Baird, as well as an infinite number of politicians from Poland, Germany, Lithuania, Georgia, and the United States, came to Kiev to support the protesters. Former head of European diplomacy, Catherine Ashton, arrived on Maidan to greet demonstrators and meet with opposition leaders.

It’s hard to imagine what would happen to Russian politicians if they tried to take part in a demonstration of "outraged" in Spain or the USA, or transferred 15 million dollars to support opposition parties, as the Assistant Secretary of State for European Affairs and Eurasia Victoria Nuland.

This abusive and inadequate behavior of senior officials largely explains the fact that two decades after the collapse of the Soviet Union, the United States and its NATO allies gave Ukraine five billion dollars in aid and grants.

Sergei Glazyev, an adviser to the Russian president on economic issues, has repeatedly warned that this money will be used to form an intellectual community of experts who oppose Russia and incite Russophobia in Ukrainian society.

Glazyev explained that scholarships from 5 to 10 thousand dollars are distributed through thousands of NGOs among students and specialists in exchange for their commitment to publish anti-Russian materials in social networks, as well as in the press.

He added that all this "huge information and propaganda machine has already overthrown more than one government in the world, and also created an explosive situation in Ukraine."

Thus, the United States and the EU killed two birds with one stone: they separated Ukraine from Russia, and also deprived Russian President Vladimir Putin of the opportunity to carry out a project to create a Eurasian union with Belarus, Kazakhstan and Ukraine to form a stability pole in this region.

Ukraine will eventually be absorbed by NATO, so that the North Atlantic alliance will be on the border with Russia to prevent the revival of Russia as a superpower.

For the West, all means are good in the struggle for the “democratic future of Europe”, which, according to US Secretary of State John Kerry, will now depend on the development of events in Ukraine.

To achieve this goal, all means are good, including the use of violence, disrespect for the law, the involvement of parties with neo-Nazi ideology. The main thing is that they meet their goals. Is this not a clear example of the manifestation of double standards in the foreign policy of the United States and its allies?

US and EU offer Ukraine to become a "backyard"

Having delayed the signing of an association agreement with the European Union, Ukraine was given time to think about the future that awaited it. According to former European Council President Herman Van Rompuy, the EU has offered Ukraine to sign an agreement to help build bridges with its western neighbors.

The EU’s so-called proposal to “build bridges with its western neighbors” means that the International Monetary Fund (IMF) will determine the conditions for granting loans, as well as issues related to rising gas prices, devaluation of the national currency, lowering or freezing wages, and the closure of state-owned enterprises.

The negative effect of the association agreement with the European Union will primarily affect the Ukrainian agricultural sector. Ukraine does not have enough modern technologies to bring it to the European level. Especially in the current severe economic crisis, which Ukraine is experiencing now.

Thus, the difficult economic situation in this Slavic country will not allow it to compete on equal terms with agricultural products imported from Europe, since due to state subsidies, European products are cheaper and more qualitative.

Ukraine must save its economy, since the proposal of the West will lead to the exact opposite result. The Ukrainian authorities do not understand that if they continue to bow to the West, in the long run, the country may find itself in a situation similar to the one in which Latin America or Greece found themselves, which were bought up with giblets by the West.

The enormous propaganda machine of the United States and the EU failed to achieve their goals - to discredit Russia due to the political crisis in Ukraine. The facts speak for themselves.

With the blessing of the United States and NATO member countries in August 2008, during the Beijing Olympic Games, Georgia launched a war against South Ossetia. Georgian aggression forced Russia to get involved in the conflict and force the countries of the South Caucasus to peace. Russia, along with several other countries, recognized the independence of South Ossetia and Abkhazia.

During the military aggression, the Georgian army committed crimes against humanity against the population of South Ossetia, mostly Russian, but the United States and its allies did not notice. It seems that the issue of human rights in this part of the world does not bother them at all.

It should be noted that South Ossetia and Abkhazia are republics bordering Russia.

It is noteworthy that when mass protests of students who were severely suppressed by the Turkish authorities were held in Istanbul on the central square of Taksim, the United States and the EU barely defended their rights and freedoms.

Surprisingly, despite the fact that as a result of the dispersal of the demonstrators, there were wounded and killed, neither the German and Canadian foreign ministers, nor the head of European diplomacy, Catherine Ashton, nor any European politician came to Turkey to support defenseless demonstrators.

It appears that the violation of human rights in Turkey - in particular, those who led peaceful protests - is not disturbed by the West. We already observed something similar when mass protests were held in Great Britain, Greece, the movement “Occupy Wall Street” in the USA.

But as the West was concerned about the violation of the rights of bandits, members of Nazi political parties who committed acts of violence on the Maidan in the center of the Ukrainian capital, after Viktor Yanukovych decided to postpone the signing of an association agreement with the EU.

The coming to power in Ukraine of right and extreme right forces forced a number of regions of south-eastern Ukraine, including the Autonomous Republic of Crimea, to reject the new self-proclaimed authorities.

Crimean residents in March 2014 decided to return to Russia on the basis of the referendum held in order to avoid the genocide of the Crimean people, to preserve their culture and language, to be part of the Eurasian power, strictly complying with international law.

Why are so-called human rights defenders, fighters for democracy and freedom of speech in the United States and the European Union not opposed to the Ukrainian occupation authorities in Crimea?

Why did the Western media do everything possible to hide the truth about how the Crimea was part of Ukraine?

Need to know and respect history, to bring the truth to the world community, to explain that the peninsula was not always part of Ukraine. It is well known that the Russian Empire liberated Crimea from the Turkish yoke in 1774 year. In 1783, the peninsula became part of the empire, and in 1921, it became part of Soviet Russia. The overwhelming majority of the population of Crimea is Russian.

In order to justify the atrocities of the United States and their allies in the world and not lose millions of dollars, the Western press hid information that February 19 1954, Crimea, by the decision of the Communist Party of the Soviet Union, Crimea seceded from Soviet Russia and was transferred to Soviet Ukraine, or rather donated .

In addition, Ukraine, apparently, did not even officially register the demarcation of its borders with Russia after the collapse of the USSR. According to the President of Kazakhstan, Nursultan Nazarbayev, this was not legally formalized, which was done by the majority of the former Soviet republics, voluntarily joining the Commonwealth of Independent States (CIS).

If this is so, then it turns out that the self-proclaimed republics in Lugansk, in the Donbas and in the Crimea are now part of Russia, since the Russian Federation has the status of the heir state of the USSR.

As we see, with regard to Crimea, the United States and the European Union have demonstrated double standards of their foreign policy. However, the West is silent on this score.

Ctrl Enter
Noticed oshЫbku Highlight text and press. Ctrl + Enter
We are
Results of the week. “He who does not regret the collapse of the Soviet Union, has no heart; who wants to recreate it in its previous form, he has no head "Geopolitical mosaic: “Arab Spring” will soon come to Saudi Arabia, and democracy in the United States tightens the screws
Military Reviewin Yandex News
Military Reviewin Google News
38 comments
Information
Dear reader, to leave comments on the publication, you must sign in.