Contrary to the USA: China offers the EU its free trade zone 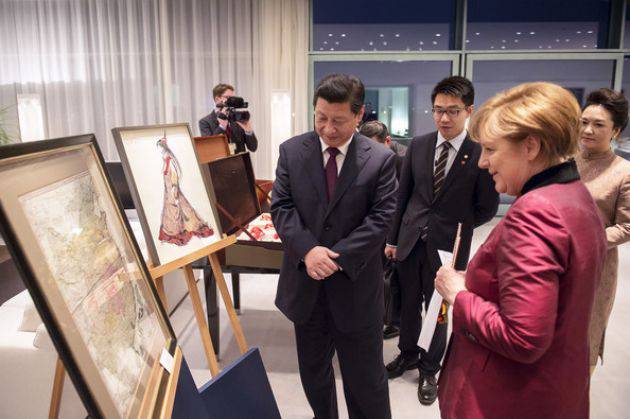 Euro-Chinese trade is not inferior to either Kimerike or Euro-Atlantic, but there is a serious argument in the hands of the White House - investment.

The visit of PRC Chairman Xi Jinping to the UK has revived European-Chinese contacts. A week later, Angela Merkel, and then Francois Hollande, came to the Celestial Empire. “China has become the key word in recent European diplomacy,” the Xinhua news agency proudly reports. For contracts signed in London for a total amount of € 60 billion, Berlin is responsible only for € 19 billion. Germany is concerned about structural changes in the Chinese economy. The PRC is moving from a mass-export model to a “consumer” one, relying on high-tech production and high social and environmental standards. Paris has pledged to monitor the execution of exhaust emission reduction tasks every five years.

The Financial Times registers a drop in the export of German cars on 5% in the most important sales market for them. Rising labor costs are a key problem for German industrialists. The Chinese authorities intend to withdraw 2 thousand Volkswagen vehicles due to environmental inconsistencies. By accepting the challenges, the FRG is trying to turn the momentary changes to its advantage. Beijing will use the German Industry 4.0 model to modernize and restructure industry. An agreement was reached on closer cooperation between the financial centers in Frankfurt and Shanghai.

The Chinese skillfully use the advantages of each of the EU members. In finance, the bet is made on London City, which will serve as a "springboard" for the yuan to enter the world market as another reserve currency. The PRC relies on British assistance to participate in the European Bank for Reconstruction and Development (EBRD). The United Kingdom is the first of the “strongest” countries in Europe to join the Asian Infrastructure Investment Bank (AIIB), which already includes 15 EU countries. In trade, there is a noticeable momentum: in 12 years, China has risen from 9 to 6 in the role of the largest market in English exports. Chancellor of the Treasury, George Osborne, sets an ambitious goal: by 2025, China should become the second after the United States. China expert Sebastian Heilmann predicts a “strategic shift” in European-Chinese relations, where “London intercepts advantage from Berlin”.

The Celestial Empire places itself above the intra-European competition and is ready to approach the complex as much as possible, but also individually if necessary. No wonder Xi Jinping persuades the UK to maintain membership in the European Union. In September, the European Commission (EC) signed a declaration of intent on the “EU-ChinaConnectivityPlatform”, designed to coordinate Chinese (“One Belt, One Road”) and European (Trans-EuropeanTransportNetworkpolicy) infrastructure initiatives. On September 29, the Chinese government expressed its desire to participate in strategic investment projects in the EU proposed by the EC Chairman Jean-Claude Juncker.

In the capital market, in contrast to the commodity market (the daily turnover of € 1 billion), there is room for maneuver. According to the EC statistics, only 2-3% of all European capital investments abroad go to China, even less Chinese foreign direct investment (FDI) reaches Europe. The conclusion of a full-fledged agreement on FDI is the "core" of the joint concept "EU-China 2020 StrategicAgendaforCooperation". For all the scale of the common projects, Brussels experts do not forget about leadership. Euobserver invites the EU to impose its rules on market access, transparency and investment liberalization on China, so as not to live "in a world ruled by Chinese standards." Former President of the Commission Romano Prodi believes that Brussels should respond to the proposals for the "New Silk Road" so as not to be on the periphery of projects carried out according to the rules of the "Middle State".

The source of disagreement can be not only "high" European standards, but also a geopolitical alignment, which is influenced by the so-called. "Atlantic solidarity". Two recent examples. October 31 The European Union supported the entry of US Navy ships into the waters of the South China Sea, regarding the action as “the exercise of the right to freedom of navigation”. And the second point: Brussels is not averse to the Gosdep method of direct communication with Hong Kong and Taiwan, bypassing Beijing. The European Commission set up investment negotiations with them. October 16, according to China Daily, the Chinese diplomatic mission to the EU “demanded respect for adherence to the one-China principle”. British sinologist Kerry Brown believes that political discrepancies are not dangerous, "the priority of the Chinese leadership is still economic growth." However, the Chinese themselves are increasingly thinking in strategic categories. Yang Xue Tong, dean of the leading Chinese University of Tsinghua, is convinced that without military alliances, China cannot become a leading world power. Compared with the Pentagon, whose number of allies reaches 60, China has the only alliance with Pakistan.

The United States hopes that “Atlantic solidarity” will continue not only in political matters. Their strategy is as follows: to prevent the economic ties of the EU and the PRC between themselves become closer than each of them with America. According to statistics from the United States Trade Representation (USTR) and the European Commission, the turnover between the EU and the US in goods (€ 517 billion) and services (€ 375 billion) is about € 900 billion. € 540 billion accounted for the goods. Sino-European business cooperation without FDI (€ 510 billion) is estimated at € 150 billion. For China, the EU is the main trading partner in the world. Mathematical facts prove that Euro-Chinese trade is not inferior to either Chimerica or Euro-Atlantic. True, in the hands of the White House there is an undeniable "trump card" - investment. While the Eurasian capital exchange does not exceed 519 billion, huge flows are circulating between the Old and the New World - € 150 trillion (!) In 3,2.

World SocialistWebSite writes that the US is using Free Trade Area Treaties (FTZs) with Europe (TTIP) and Asia (TPP) to "isolate China." The latter "under the growing economic and military pressure from the United States turned decisively towards Europe." Who will the European Union choose? Newsweek expresses American concerns: "If the US and Europe do not agree on a trade pact, then China will win", gaining the right to "set its own commercial rules." Downing Street lobbies an FTA with the Chinese, irritating the Oval Office. Barack Obama accuses the British of a policy of "constant favors" to the Chinese authorities. London's accession to the AIIB is seen as a challenge to the World Bank. There is still some consolation for the Yankees. Merkel avoids free trading with the Middle Kingdom, making it clear that "such an agreement will intensify the conflict with the US government." The "trade war" between Beijing and Washington is unfolding not only in Europe, but also in the vastness of Asia. After seeing the FRG Chancellor, on November 2, the Chinese prime minister rushed to Seoul to take part in a trilateral summit with colleagues from Japan and South Korea.

Ctrl Enter
Noticed oshЫbku Highlight text and press. Ctrl + Enter
We are
New plants and workshops in Russia in 2014 yearList of destroyed the largest and most high-tech enterprises
Military Reviewin Yandex News
Military Reviewin Google News
12 comments
Information
Dear reader, to leave comments on the publication, you must to register.