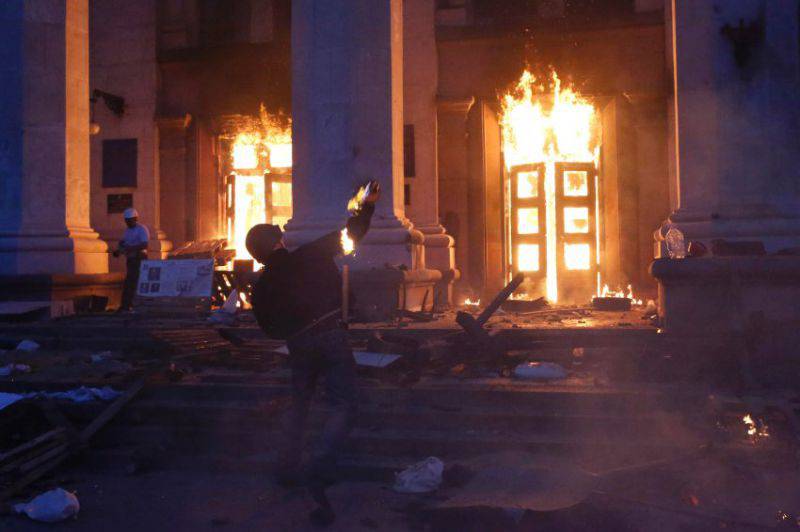 After the street fighting in Odessa in May 2014, a fire started in the House of Trade Unions. 48 people died. And now the Council of Europe issued a murderous sentence to Ukraine.

Odessa is a metropolis located near the Black Sea. Representatives of over 100 peoples live here. Port and trade contributed to the development of the city, which is distinguished by cordiality and a relaxed atmosphere. But after 2 in May 2014, the name “Odessa” is associated not with tolerance, but with rampant violence - as well as with the authorities, who did nothing to protect the victims.

The two groups confronted each other that day. About 2000 Ukrainians came to the rally in support of a successful revolution on the Maidan and the "unity of the country." Among them were hooligans and nationalists from Kiev and Kharkov. On the other side were those who call themselves "Anti-Maidan": their flags were Russian flags and St. George ribbons. "Antimaydanovtsy" attacked the hooligans, and the street battle began.

They shot at each other, six people died. In the evening, hooligans and nationalists attacked the headquarters of Anti-Maidan, a tent camp near the House of Trade Unions. Pro-Russian activists barricaded themselves in the House, flew "Molotov cocktails." The fire engulfed the building. By the end of the day, 48 people died.

The investigation is not progressing. 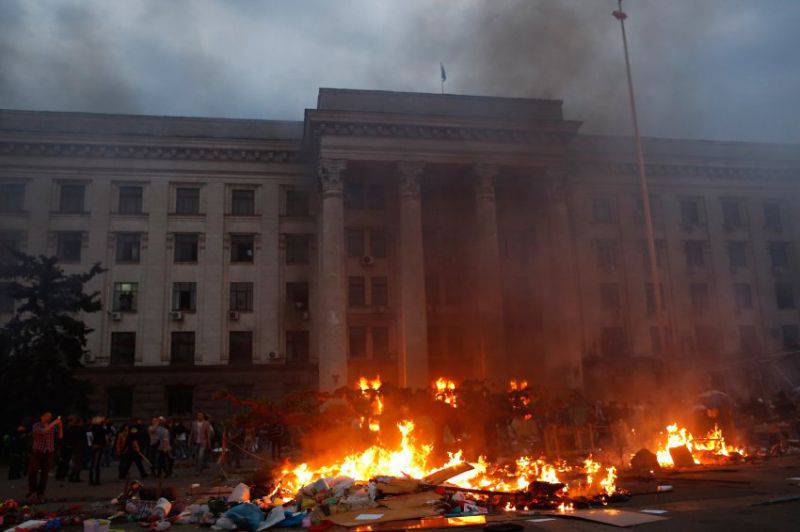 The tragedy occurred a year and a half ago, but the investigation barely progressed. And now the Council of Europe issued a murderous sentence to Ukraine. The report, presented on Wednesday in Kiev, states that "there is no any progressive development in the investigation." The authorities do not show "sufficient thoroughness and thoroughness." The evidence is lost because the next day street cleaners simply swept them away. Access to the ruins of the House of Trade Unions was closed only a few days later.

True, many criminal cases are still being investigated because of street fighting, but there is no accusation in the case of the attack on the House of Trade Unions. The only suspect was released on the grounds of insufficient evidence.

At the same time there are documented evidence of stiffness. Some pro-Ukrainian demonstrators, however, tried to rescue people from the burning building. But the numerous videotapes made by the mobile phone show aggressive people who continue to hunt. On one of the records you can see a man who is saved by going down the fire escape. And when he was on the ground, they attacked him and started beating him. He climbed the stairs and returned to the burning building. Another video: people jump out of the windows, many are injured and are lying on the ground. There they were dominated by a man who attacked them with a baseball bat.

The impact of events has gone beyond the city 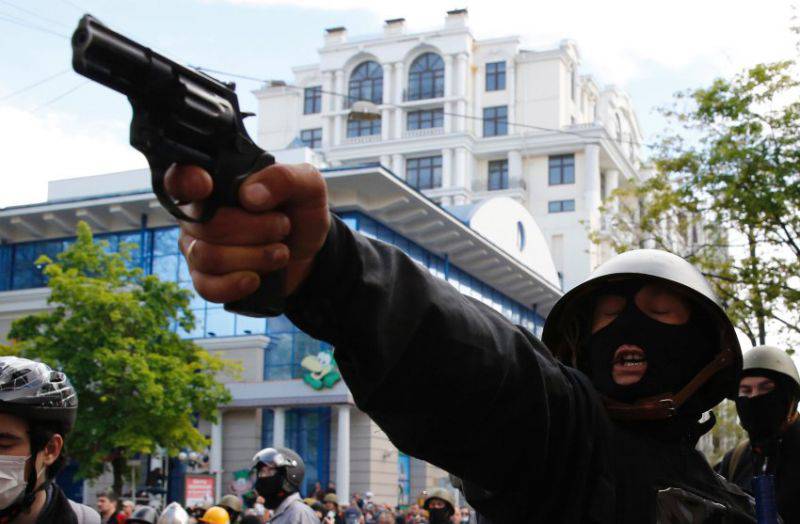 Censure of the Council of Europe is more than sophistry of the West. Events in Odessa had an impact on what was happening outside the city. Separatists in Donetsk and Lugansk justify their armed struggle against Kiev by the need to defend themselves from the nationalist gangs that are being killed. The Russian media say the same thing: Odessa is proof that Ukraine purposefully preys on friends of Russia.

Ukraine has taken few steps to prove the injustice of such recriminations. The then governor of the Odessa region even justified the arson: the actions were “legitimate” because they were necessary to “neutralize the armed terrorists”. Today, only two investigators are involved.

The report lists all the facts known to date. Conspiracy theories are rejected. The Council of Europe also cites the results of an investigation conducted by a civil initiative from Odessa. Activists call themselves "The 2 Group of May." They own the most transparent investigation into the tragedy. They did not find any indication of the conspiracy. “On the contrary,” says Sergey Dibrov, a reporter and spokesman for the Group. “Everything developed erratically, spontaneously, unpredictably.” The real reason is, in his words, “in the degeneration of all government bodies caused by pervasive corruption.” 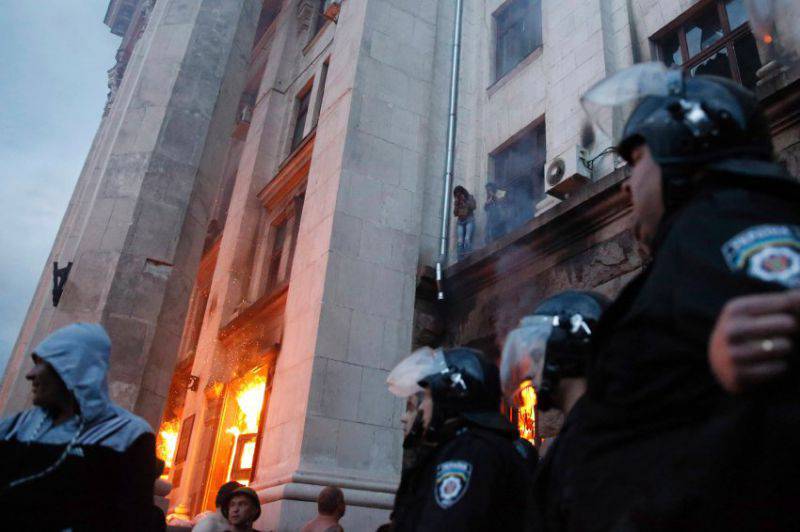 The 90-page report of the Council of Europe is also a chronicle of the failure of the authorities. So, the police, two days before the events, learned about plans to destroy the Anti-Maidan camp at the Trade Unions House. But the police brought there only a hundred people, sent as many to the city center. Officials watched indifferently as the pro-Russian fighter fired his rifle into the crowd.

Orders that day gave the deputy police chief of Odessa Dmitry Fuchedzhi. His role remains mysterious. On May 4, he allowed a pro-Russian crowd to smash the gates of the central police building with a truck and free many detainees. True, a special forces detachment arrived at the scene, but did not intervene. But the investigators could not interrogate the commander: by the time Fuchedji was finally wanted, he had disappeared abroad.

Firefighters did not help either. The nearest fire station is located no more than 500 meters from the House of Trade Unions. The then head of the administration said that he strictly forbade his people to leave. According to him, the situation was too dangerous. It is very possible that the professional lifeguard had other reasons: as they say in Odessa, he became head of the fire department only because his father had once served as mayor.

The Internet edition "Duma" later announced a recording of a conversation with the dispatching emergency service. There you can hear how the “telephone lady” coldly informs the caller that the fire is absolutely not dangerous. Then she hangs up. Then they called from the House of Trade Unions. “We are on the way,” the telephonist reassured. In response, a sob: "We will now burn."

Ctrl Enter
Noticed oshЫbku Highlight text and press. Ctrl + Enter
We are
The case of "Crimean terrorists." Sentence passedResults of the week. “He declared this vile thought as his achievement and called tolerance”
Military Reviewin Yandex News
Military Reviewin Google News
95 comments
Information
Dear reader, to leave comments on the publication, you must to register.