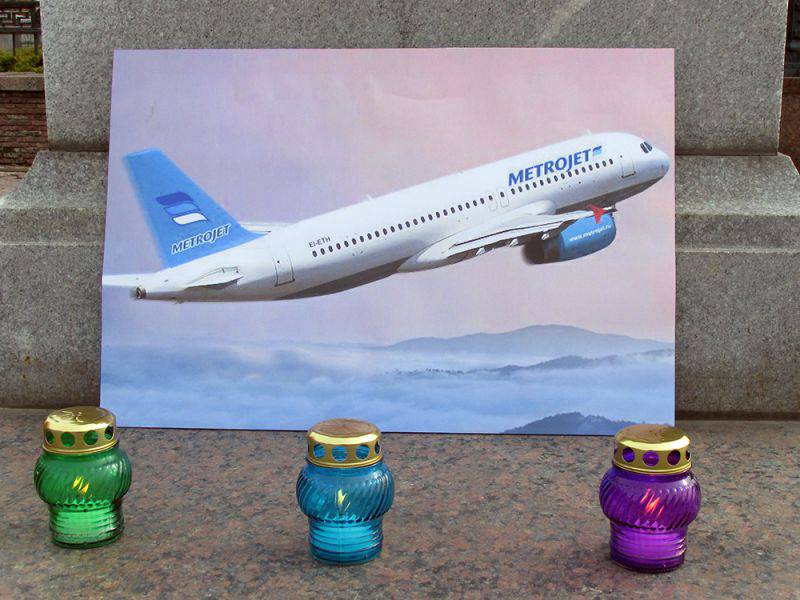 “Together with Russia” was the name of the rally in memory of the victims of the crash of the Airbus A321 Kogalymavia plane, which took place in Donetsk. As soon as the plane crash happened, the Donetsk residents began to write to the Ministry of Foreign Affairs of the DPR asking them to hold such an action. Indeed, in other countries there is an embassy or consulate of Russia, where you can bring flowers, candles, soft toys. But in the Republics of New Russia so far there is no such representation. And residents feel part of Russia and can not stay away from her sorrows.

And the authorities of the DPR heard the citizens and allocated a place for a requiem meeting in the center of Donetsk, at the Transfiguration Cathedral. 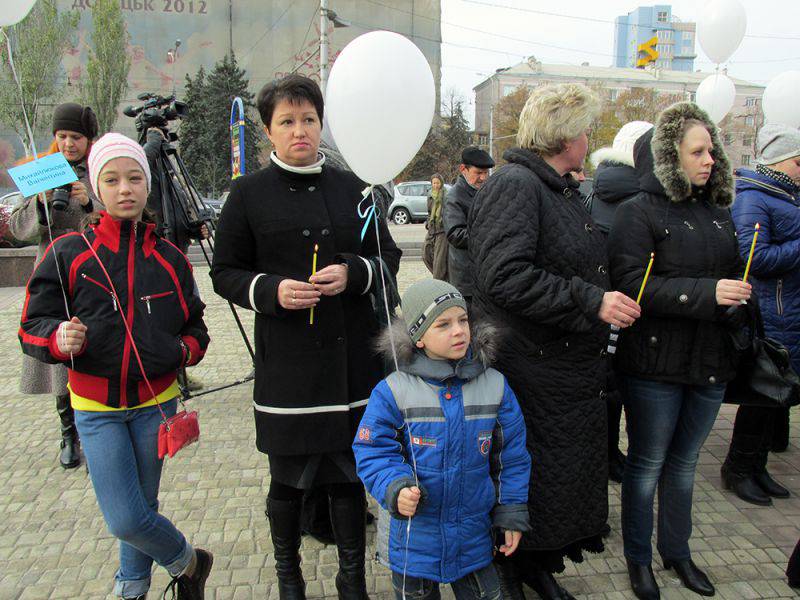 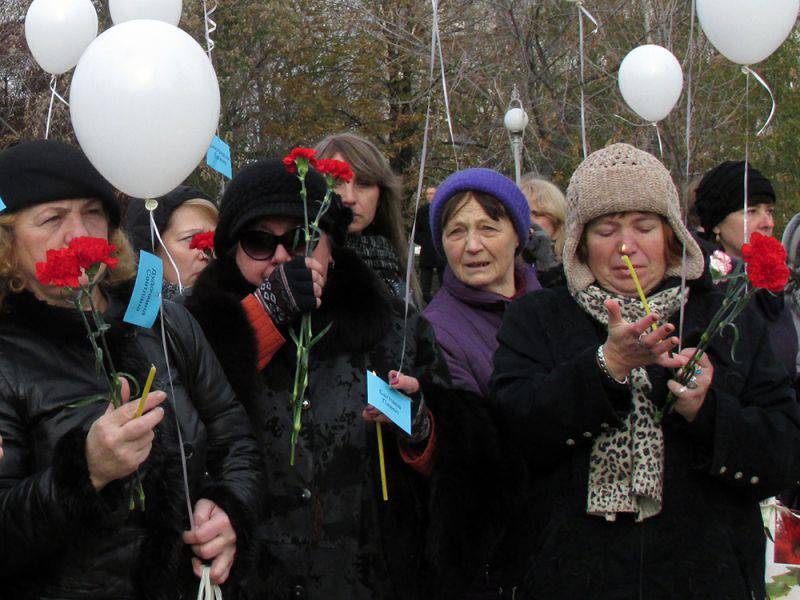 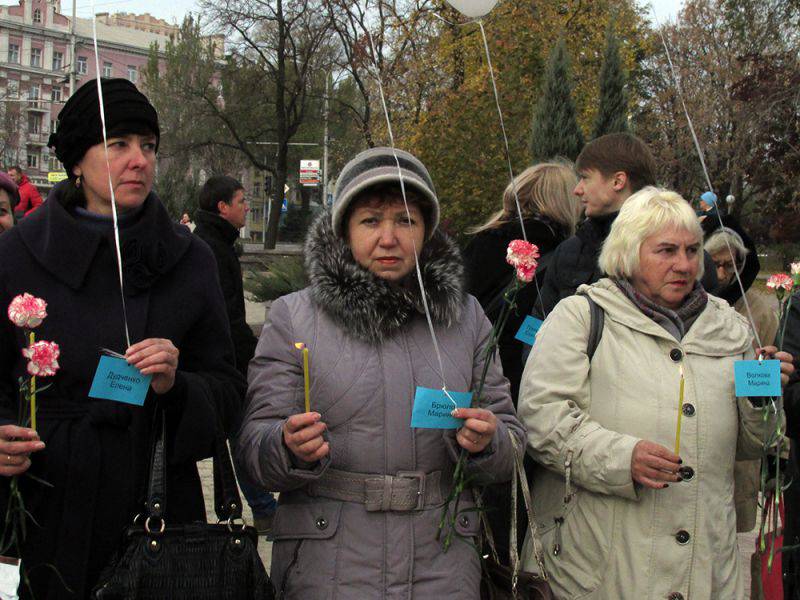 Hundreds of people, despite the gloomy and rather cold weather, came on the morning of November 1 to the square in front of the cathedral. In the hands of citizens were carnations and candles. Many Donetsk residents came with children. 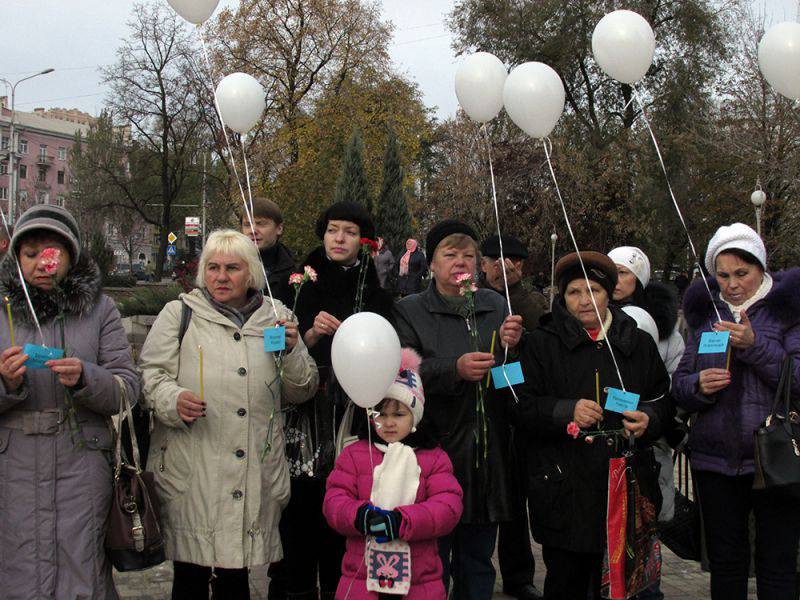 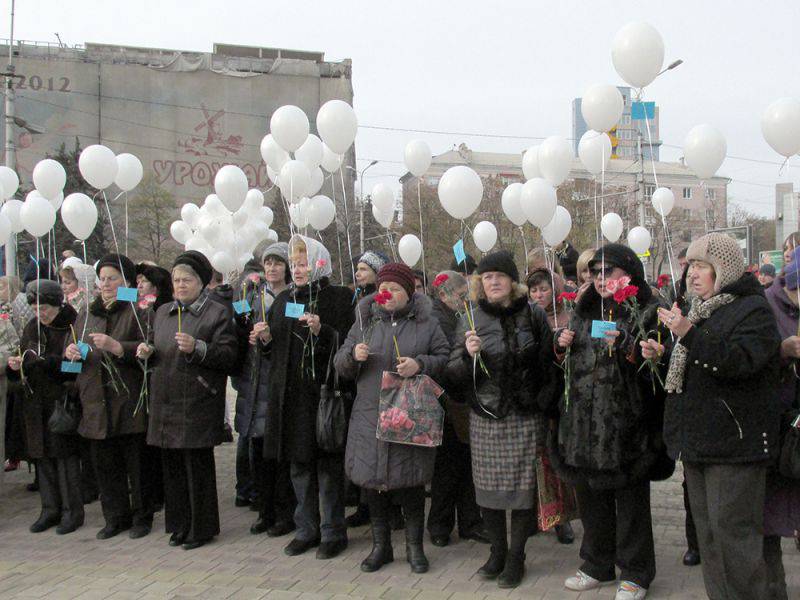 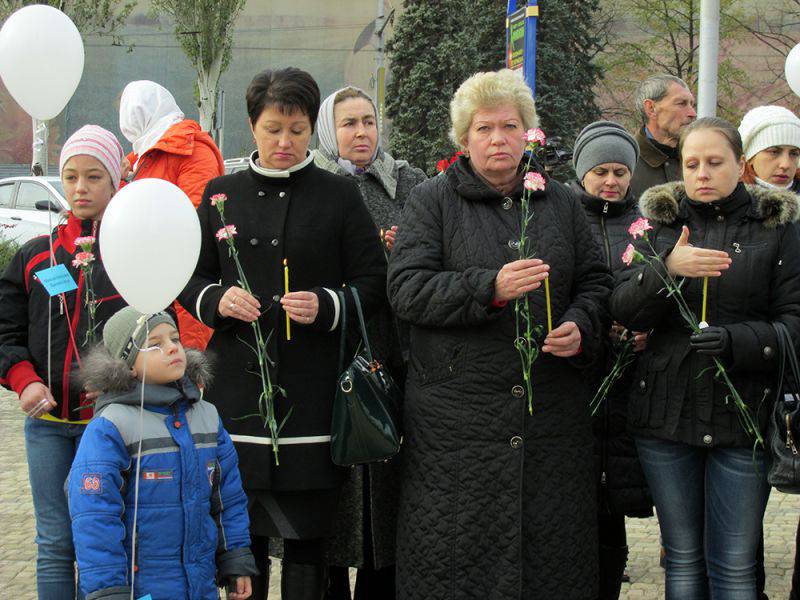 White balloons were distributed to the assembled people - each of them was attached with a small sign on which was written the name of one of the dead. Total - 224 ball ... 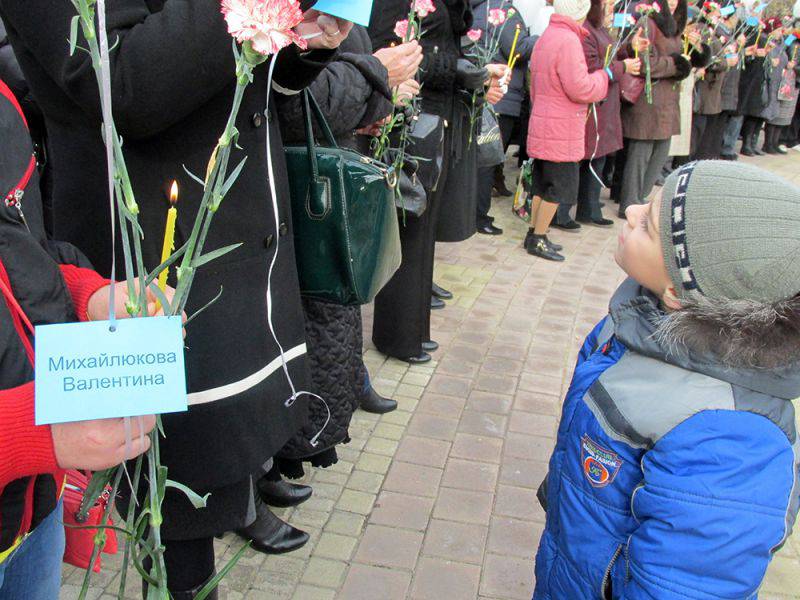 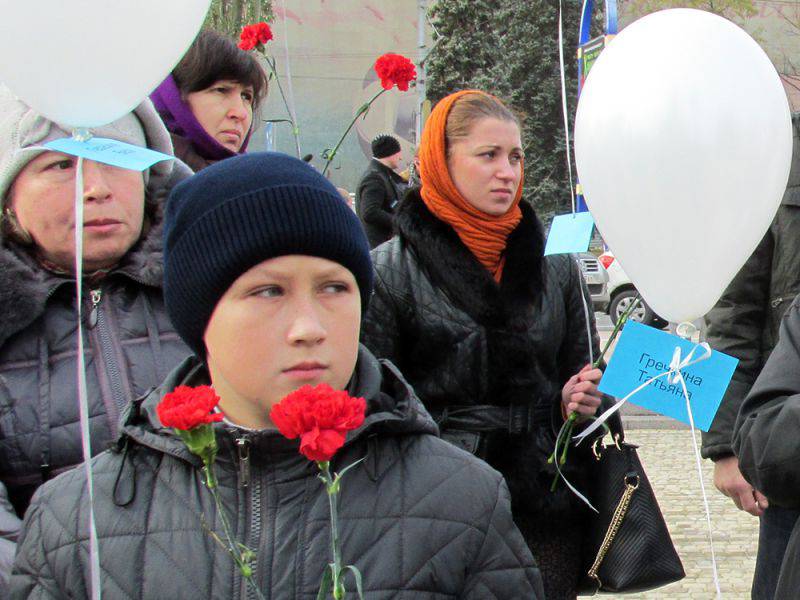 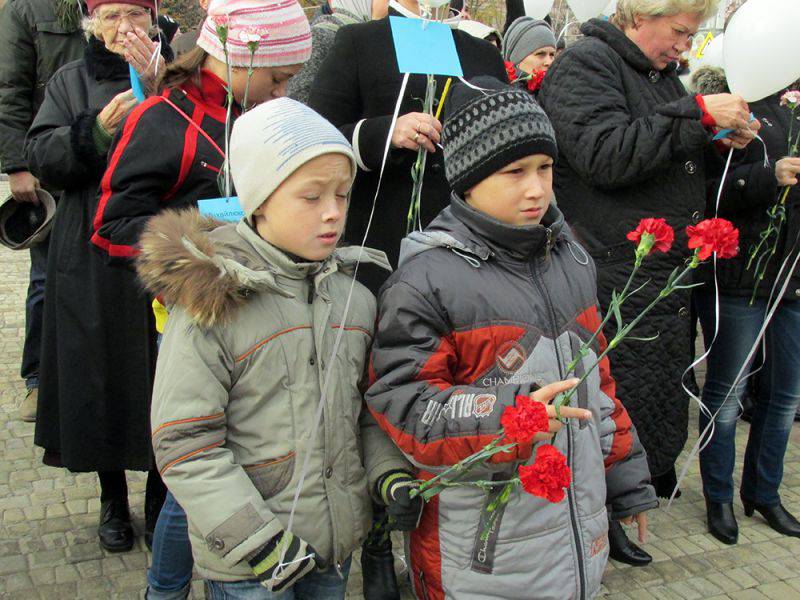 We decided to do without official speeches. Served a memorial service. At the same time, journalists were asked not to photograph clergymen - this could be dangerous for them. Yes, there is nothing sacred for ukrokarateley and their accomplices - they can add any priest to the black lists only for the honored requiem for the dead. 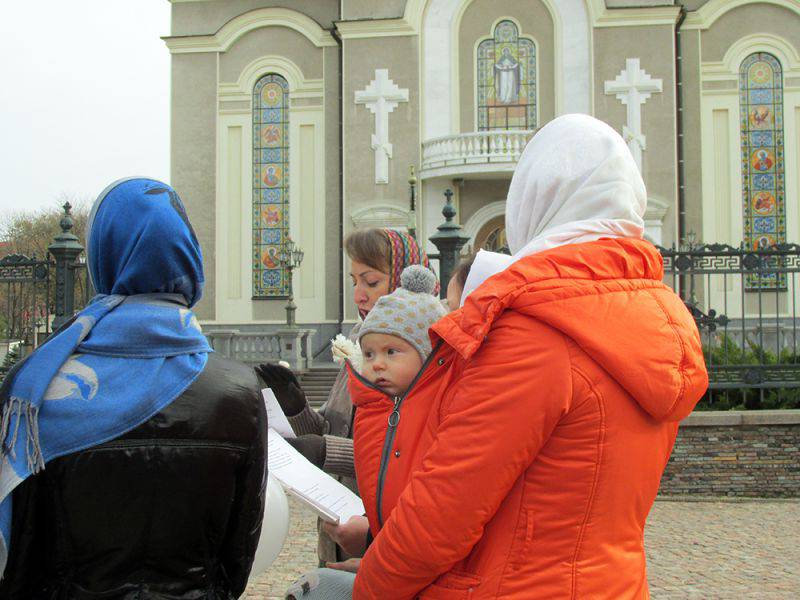 Candles were extinguished in the cold wind, they were lit again. The harsh Donbass sky seemed to divide the silent grief - it was gloomy, leaden. However, at that moment when people released balls into the air - the heavens brightened for a moment, as if accepting the souls of the dead. 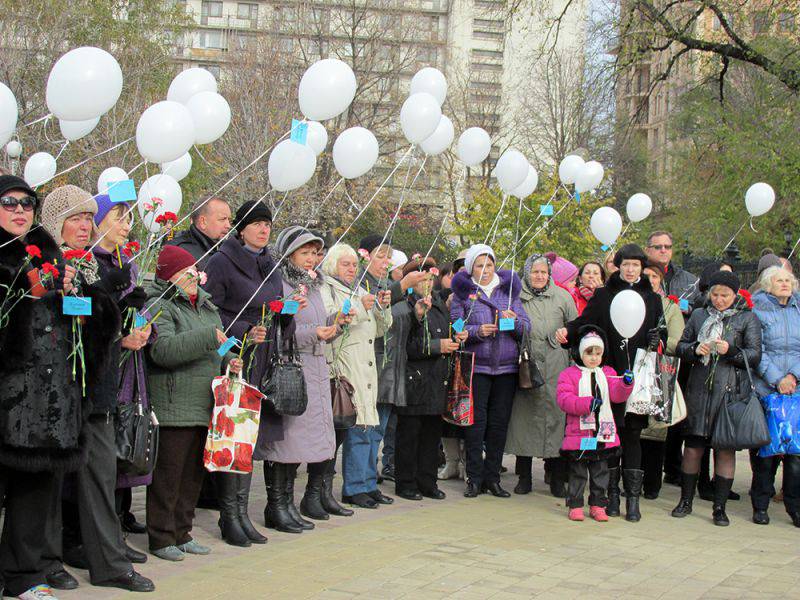 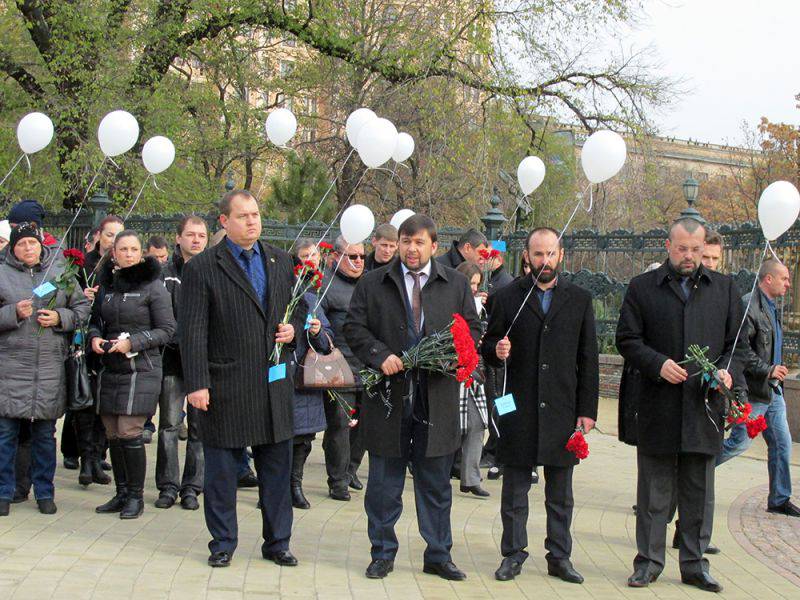 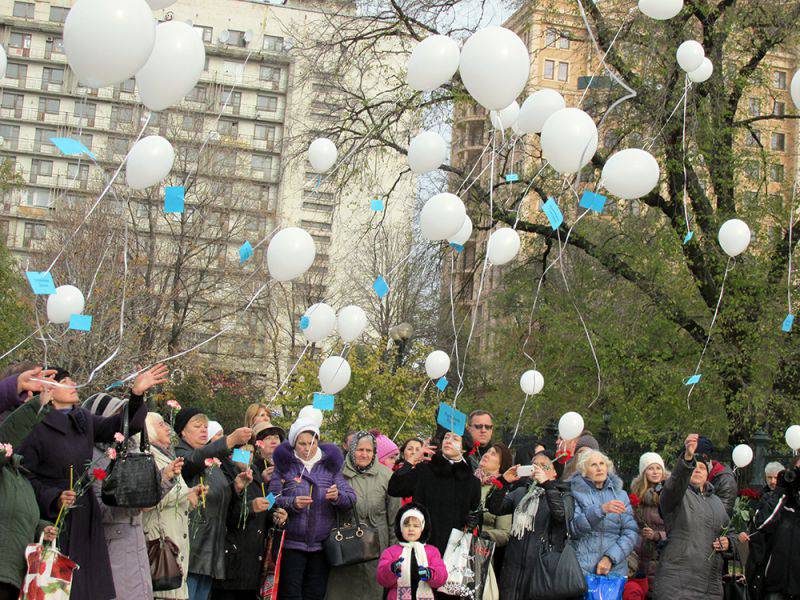 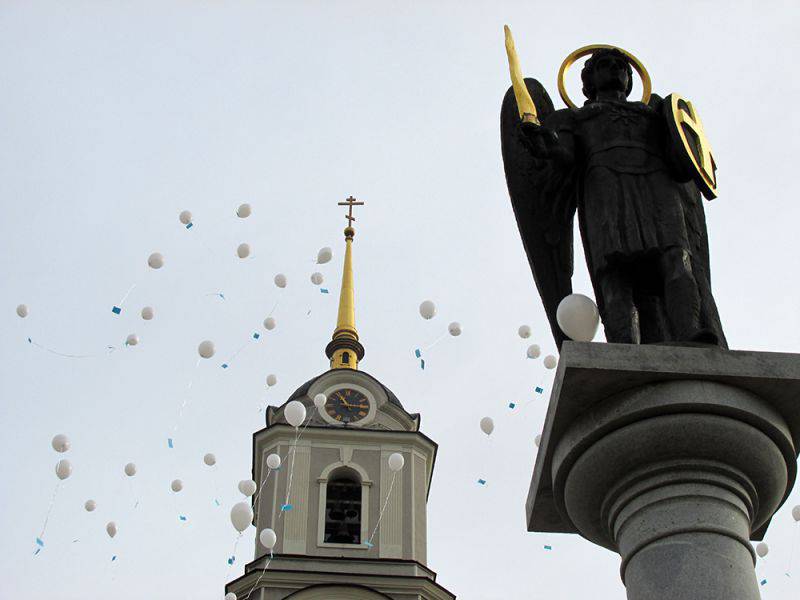 Near the Transfiguration Cathedral there is a column, on top of which is a statue of the Archangel Michael. At the foot of the column put a photo of the deceased aircraft. There they put candles and laid flowers. 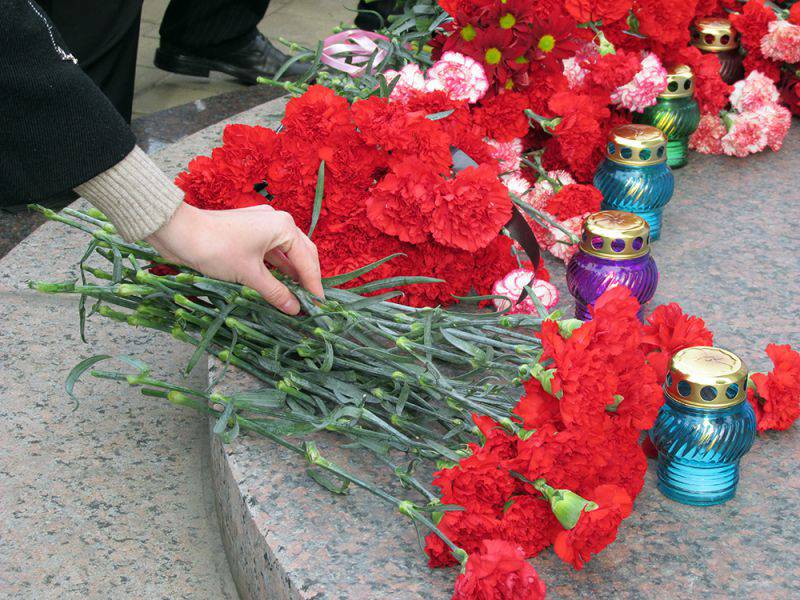 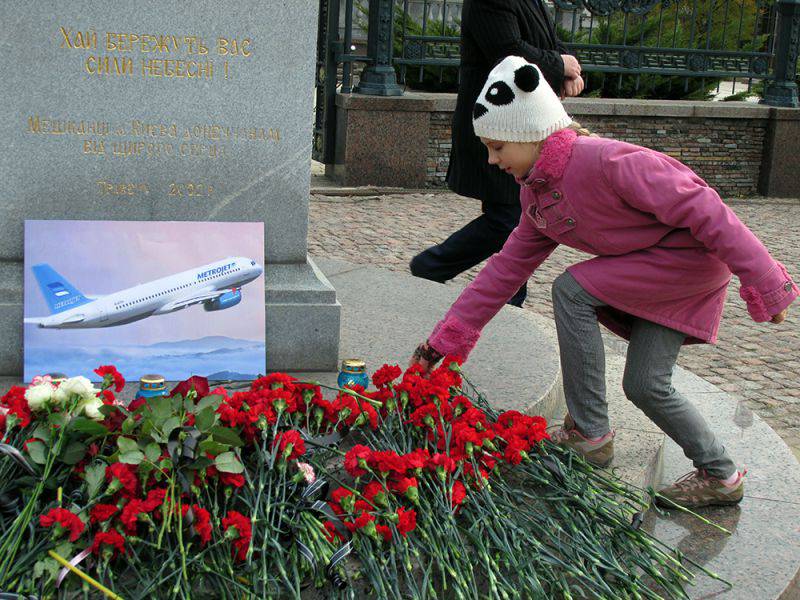 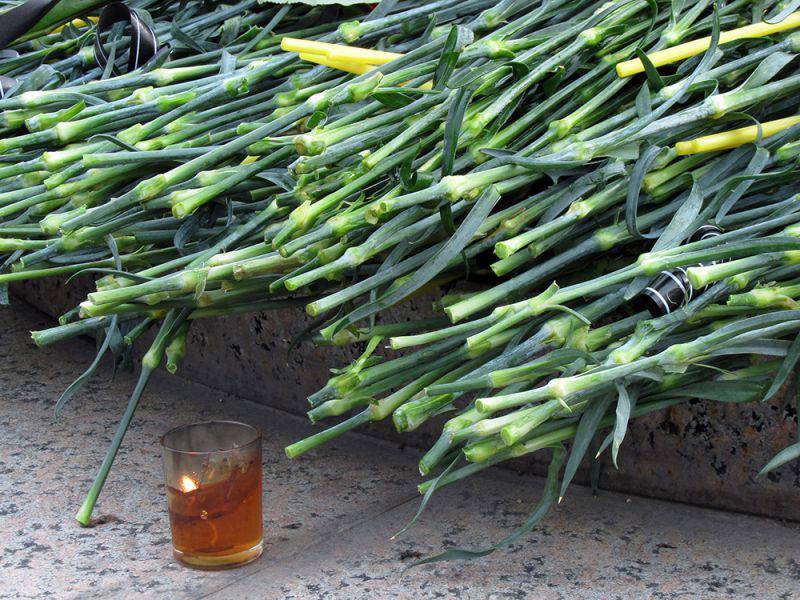 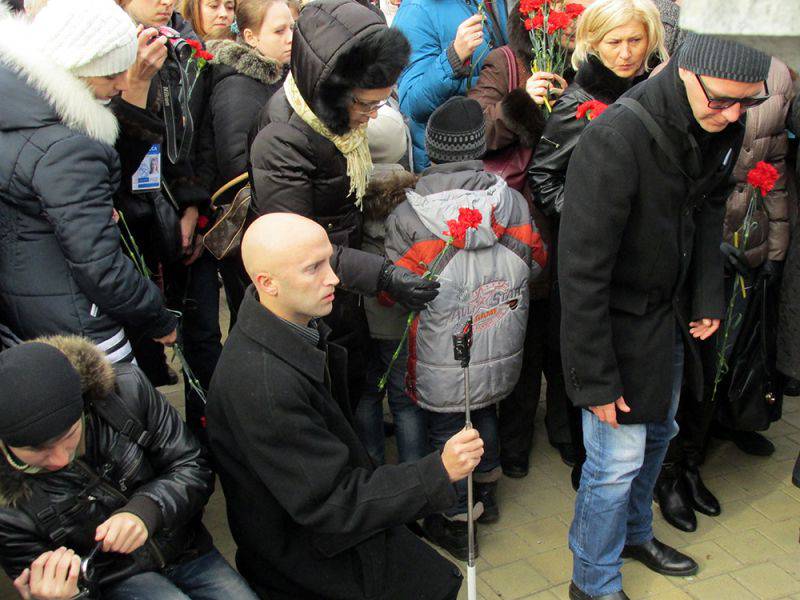 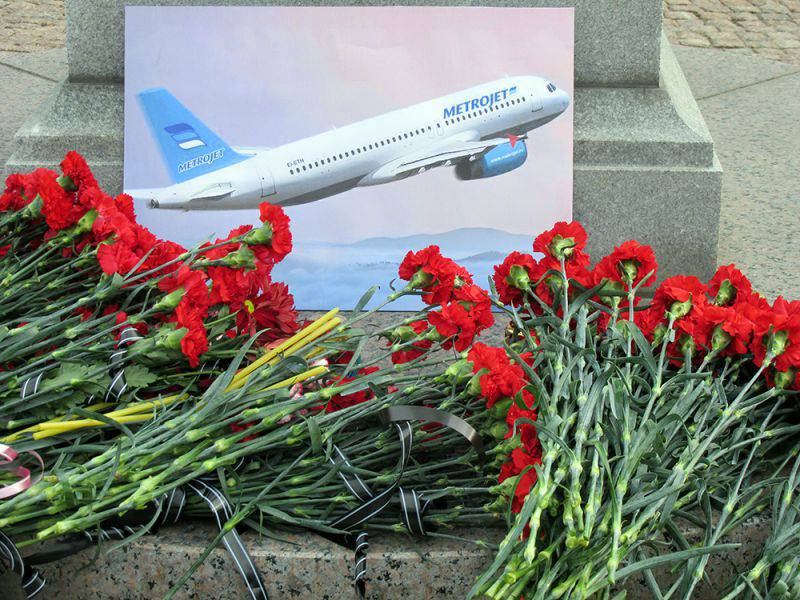 The head of the Ministry of Foreign Affairs of the DPR, Alexander Kofman, in a conversation with journalists, said that the tragedy did not leave anyone indifferent in the Republic. He expressed condolences to the relatives of the victims and added: “We are one family. The troubles of Russia are our troubles. The joys of Russia are our joys. ”

Those who could not come up in the morning came later. With flowers and candles.

On the eve of the head of the Donetsk People's Republic, Alexander Zakharchenko, issued a special statement in connection with the tragedy: “Dear citizens of fraternal Russia! Today, a terrible tragedy occurred that took the lives of 224 people. On behalf of all residents of the DPR and on my own behalf, I express my deepest condolences to the families who have lost their loved ones. The people of Donbass mourn with you, sincerely empathizing with your loss. ”

News came from the cities of Ukraine, while under the occupation of the Kiev junta. In Kharkov, Odessa, and in Kiev itself, people came to the buildings of representative offices of Russia and laid flowers.

Unfortunately, there were those in Kiev who falsely and cynically allegedly expressed their sympathy by writing on a poster: they say, “we are not like that, we mourn also for our enemies”. However, in comparison with those supporters of the Ukrainian Nazis, the followers of Bandera, who expressed violent joy on the Internet about the crash, even this is already a small progress.

But in Odessa, despite the fact that the city is under the brutal terror of the “Right Sector” and other Nazi gangs, - a lot of people came to the building of the Russian consulate. It literally drowned in flowers.

News comes from distant Damascus - there thousands of Syrians came to the Russian embassy. Yes, in Damascus, as in Donetsk, they now especially know the price of life and death ...

Ctrl Enter
Noticed oshЫbku Highlight text and press. Ctrl + Enter
We are
Results of the week. "Mourning in the heart, not in clothes"White balls in memory of the victims of fascism
Military Reviewin Yandex News
Military Reviewin Google News
20 comments
Information
Dear reader, to leave comments on the publication, you must sign in.