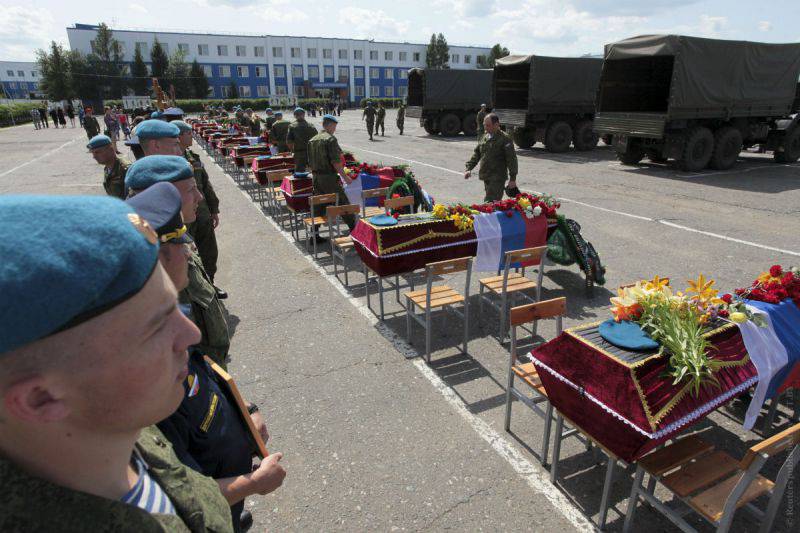 Casualties in any armed confrontation are inevitable. Moreover, it was precisely the desire to inflict damage on the enemy in manpower that guided all sides of past wars, including two world wars. And this is what the participants in contemporary local conflicts are striving for. That is, any war, regardless of the causes and objectives involves death.

That is why, when I read the recent decree of the President of Russia on classifying the losses of the Ministry of Defense personnel in peacetime (from 28.05.2015), I was perplexed. But not the decision of the authorities from now on and forevermore to hush up the feats, the glorious dates and the names of the heroes who put their lives on the altar of the Fatherland, caused controversial feelings. It just became clear that the dismantling of the volunteer army in the south-east of Ukraine, judging by the intensity and nature of lawmaking in the military sphere, is not the last armed conflict involving our guys. And then the events in Syria arrived.

I will leave the consideration of purely military issues to army ranks, although he himself professionally engaged in them after graduating from the military school and, again, the military academy for nearly 40 years. Moreover, the Supreme Court of 13 of August confirmed the legitimacy of the ban on the disclosure of some impartial figures for a man in general's uniform. But by virtue of my personal participation in hostilities, I can say that to speak only about the fallen and wounded on the battlefield means to hush up misfortunes and their consequences.

Russia's active, let’s say, foreign policy undoubtedly hides the protest mood, which shook the government in other countries at the time of the global crisis and falling oil prices. But nowhere are there such obvious demographic problems associated with intensive efforts to protect national interests. No one takes into account that in connection with operations “for peace enforcement”, “restoration historical justice ”,“ rendering assistance to the fraternal people ”Russia suffers even indirect, but no less deadly for the people.

I know this not from books, I myself visited seven hot spots. But I refer to the book. Vasily Shukshin has a kind, like all our prose, story "Exam". The work on the scale of its own trifling, but containing the revelation of the Russian man, in fact, great. Here it is: “Our country is fighting a lot. It is difficult to fight. It is almost always the people's war and the people's grief. And even the one who does not take direct part in the war still lives with the same feelings and concerns that people live with ... ”

According to official statistics, in Russia today more than half of young families fall apart, whereas 10 years ago - only (?) One third. Civil marriages, or rather cohabitation without obligation and responsibility for each other, become the rule, not the exception. The birth rate decreases, the population decreases and the purity of thoughts decreases. Causes are called infidelity, cooling feelings. Do you really believe that?

The share of my generation of officers of the Airborne Forces had a lot of tests. It is no coincidence that it so naturally and honestly inherited from the fathers of front-line soldiers military traditions, a code of honor, even the rule to commemorate the fallen at every table. But if the third toast is from there, from the past, then the fourth is for the living, with the saying “God forbid we no longer meet in the war” - generated not by one fight, not one war, namely, a series of military campaigns, usually with the same performers. And the end of this series is not visible yet. Washington’s hand, of course, is obvious, but not about the guilty, let me remind you, this is a question.

So, I'm talking about orphans, broken families, faithful husbands and, as a result, unintelligent children. How legitimate and justified my anxiety about this is to judge the reader. I will not recall my ex-wife, tormented by the expectation of me from "missions to the war", if only because she is alive and let her century last. But my friends, the major 5 of the motorized rifle division from Shindant Michael Sklyar and the guard major from Marneuli fighter-bomber regiment Andrei Maslyukov, “behind the river” blew the hearts of their condemned literally. What category of losses include the widowhood of soldiers-internationalists, order bearers, just Russian men?

Behind particular cases a bitter picture is drawn all over Russia. In the south of Moscow in 1993, the lieutenant colonel Mikhail Likhodei abandoned his wife after being seriously injured achieved the construction of an apartment building for his soldiers - veterans of the Afghan war. I was at those celebrations on Orekhovy Proyezd on the occasion of the delivery of warrants to new settlers with the participation of the first President of Russia, Yeltsin. Sunny day, blue sky, sea of ​​scarlet roses, smiles of newlyweds ... Boris Nikolayevich would know then that after 10 years, every tenth of his godchildren would die from wounds and vodka, and more than 70% of young families would exchange this housing for the jointly ... jointly received in total use of the property.

However, that is me all about Afghanistan! I recently visited Kostroma, met with my twin cities now through Chechen campaigns. And he raised a glass of tea along with the commanders of the local riot police and SOBR, police colonels Nikolai Galkin and Pavel Babchuk for their fighters, each of whom has almost 20 (!!!) business trips to hot spots. At the parade shows dazzled in the eyes of the brilliance of orders and medals. And the problem is the same as that of my soldiers from the Afghan past. Only the 70-percentage threshold in the loss of families, the guys are now crossing over 3 – 4 of the year after the start of their combat biography ...

For all the time since the creation of the riot police, which is about 15 years, only three have abandoned the planned departure to the hot spots. The team accepted their references to their wives and children with understanding, no one reproached this trio by the fact that instead of them others would be forced to go to war. But even in the patrol for the Day of the city there was no one who wanted to intercede with those who refused. And they were forced to resign altogether from the internal affairs bodies, because the sentence of former friends is indeed final. Also because Igor Kul and Sasha Pogodaev once served in this detachment, lieutenant and major who folded their bright heads in the Chechen war.

However, in families, those who refused were given the resignation. When one of the wives found out about a faint-hearted spouse, she filed for divorce, her sons do not speak to the other, and the third started to drink black ... And I was not surprised at such a sad result, judging by justice, the result. Tea, we live in Russia and we are escorted into battle in Russian Russian women.

I want to be understood correctly. I recollect those who changed their duties only in order to show that those who remained loyal to the oath also had a choice. This is not a matter of raising the status of the person you are writing about, by humiliating others in the common cause of protecting the interests of Russia. That is why I will say the main thing: the Kostroma guys are so strong that they are the same as everyone, like all Russian soldiers of the first throw. That's what's great!

But live in their incomplete 30 years of war veterans. Both the former wives, or the new girlfriends, who also do not risk tying up their fate with the people doomed to the war, run up to them with empty flowers. Children from war-torn families with living parents grow up as orphans. And the last, it seems to me, the most important victims. For nothing and no one is to blame, is it not true?

I gathered the guys after school. They know how hard it is for their moms to grow up alone. They know that the popes can “go to war” again at any moment. And the amount of alimony, benefits for the fact of possible death is also known to them. Only about the exploits of their fathers, no one told them, especially about the exploits of the dead. Prohibited? And I told ...

I carefully read reports on the course of the last exercises of the troops of the Central Military District. The fighters oppose saboteurs and ambushes in a mine war on the march, offering civilians in two languages ​​to stop resistance. That is, they are preparing to beat the enemy on foreign territory. If this is not aggression, but peace enforcement, then fine. But wouldn't it be better to start with defensive combat training?

... My younger son Roman became disabled after the first terrorist attack in the capital. The senior lieutenant’s formation took place in Chechnya, returned with the medal “For Courage”. Later he visited another troubled republic, then another ... A year ago, Timofey received another military rank ahead of schedule - a major, but for what this honor, he hasn’t said so far. Maybe something shameful made him do it? I do not know, and the conversation is not about that. Just then, a year ago, the magistrate was considering a lawsuit for the dissolution of his marriage to the beautiful Natasha. I bought a bicycle for Mariach's granddaughter.

The process of divorcing families and the population in Russia is simplified. Therefore, I was not surprised when my sister was invited to move with her son from a dying virgin state farm in northern Kazakhstan, to Moscow to accept Russian citizenship, without a second thought:

- For a long time, many would have left for Russia. But you have war after war there, and they expect, probably, men of military age. And what if, God forbid, will they start bombing you too? ..

No, no one will understand what happiness it is to die for the Motherland!

MORE THAN IN THE DOMESTIC

And finally - these are the sad facts. Due to the collapse of families, primarily civilians, 200 – 220 children become daily orphans every year in Russia! From the words of our “Chief Ombudsman” Pavel Astakhov, almost 700 thousand children are currently in boarding schools, orphanages, orphanages - this is one in five children in the country. That is, the sum is at least twice as large as after the Great Patriotic War. And this is without taking into account the fact that every 50 child in Russia is a homeless child. That's how many girls and boys we have, who even have no one to write and complain about during Christmas.

Summing up this unfortunate official statistics, I will say that from many other sources an even more terrible figure emerges: in Russia today there are up to 5 – 7 million street children. Nine out of ten - the so-called social orphans, do not go to school 3 million children, about 5 million live on the street. And here are some more killer figures: in post-Soviet Russia, infant mortality from drugs has increased by a factor of 48.