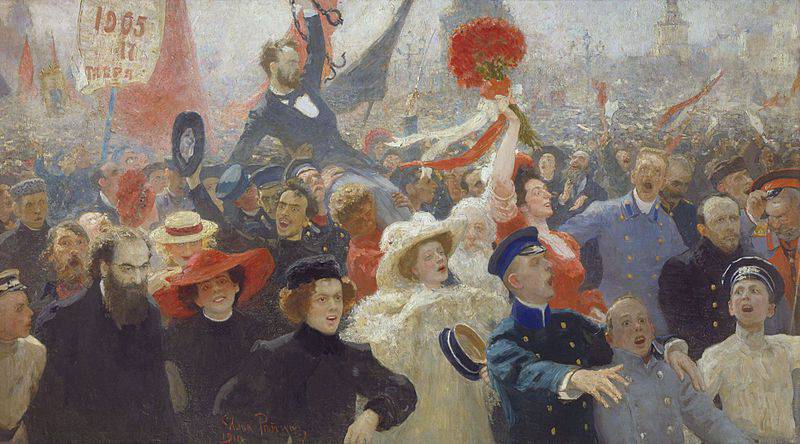 110 years ago, 17 (30) in October 1905, was published the manifesto of Emperor Nicholas II "On the improvement of the state order", which declared the talents of political freedoms to the citizens of Russia, the inviolability of the person, the expansion of the electoral qualification in the elections to the State Duma. October 17 Manifesto 1905 was prepared by the Chairman of the Council of Ministers of the Russian Empire S. Yu. Witte, who considered constitutional concessions the only way to defuse the revolutionary atmosphere in Russia.


The 1905 Manifesto was issued by Emperor Nicholas II under the pressure of an increasing revolutionary situation: mass strikes and armed uprisings. This manifesto satisfied the liberal public, as it was a real step towards the transition to a limited constitutional monarchy. Liberals were given the opportunity to influence power through parliament. This manifesto is considered the beginning of the Russian monarchy and parliamentarism.

The manifesto secured freedom of conscience, speech, assembly, and gatherings; the involvement of the general public in the elections; compulsory procedure for approval by the State Duma of all published laws.

It must be said that the idea of ​​"democratizing" the Russian empire has long been in the community. Constitutional projects that were supposed to reform Russia “from above” were born more than once. Among the Westernizers (the leading part of the Russian educated society) “constitutional dreams” were the leading idea and gradually they became radicalized.

Thus, in the Russian Empire, the period of the XIX - early XX centuries. There were two main ideas of the "democratization" of Russia. "From above", some emperors, representatives of the ruling dynasty and high dignitaries wanted to change the existing system. They wanted to arrange in an evolutionary way a constitutional monarchy in Russia on the model of England. That is, they also followed the example of the West and were Westerners, but did not want unrest and confusion. At the same time, representatives of the pro-Western public dreamed that the main branch of power in Russia would be the legislative branch - the parliament. They wanted to eliminate autocracy. Both the Decembrists and the commoners, as well as the liberals and the socialists of the late XIX - early XX centuries, dreamed of this. This difference in the vision of the future of Russia, and based on Western concepts, eventually led to the catastrophe of the Russian empire and the entire Russian civilization, which was saved only by a new, Soviet project.

The first to think about the reform of Alexander I. Even as heir to the throne, Alexander was critical of the despotic and paternalistic methods of his father's rule. Alexander's reformist attitude was expressed in attracting M. Speransky to state activities, who prepared several of his own political notes: “On the indigenous laws of the state”, “Reflections on the state structure of the empire”, “On the gradual improvement of the public”, etc. In 1803 year on behalf of the emperor Speransky made a "Note on the device of judicial and government institutions in Russia." When developed, he showed himself to be an active supporter of the constitutional monarchy. However, it did not go further. In addition, Alexander abolished serfdom in the Baltic provinces, granted the constitutional structure of the Grand Duchy of Finland, and then the Kingdom of Poland. Alexander took part in the drafting of the Constitutional Charter of France, which turned it into a constitutional monarchy. In Russia itself, except Speransky, Vorontsov and Novosiltsev worked on constitutional projects, but all their projects were laid on cloth.

By the end of his reign, Alexander was clearly disillusioned with the reform work, seeing that it leads to the growth of revolutionary sentiments in society, rather than stabilizing it. Thus, speaking in 1818 in Warsaw at the opening of the first Polish Sejm, Alexander I once again returned to the constitutional drafts and stressed that the rest of Russia was not yet ripe, like Poland, for a constitutional reorganization. Interestingly, Alexander was aware of the emergence of the “Decembrists” movement mixed up in Westernism and Freemasonry. When, in 1821, prince A.V. Vasilchikov introduced the tsar with materials on conspiracy and conspirator’s programs, Alexander I threw the list of conspirators into the fire, noting that he could not punish them, since "in his youth he shared their views." The radical program of the Decembrists (especially Pestel) marked a radical, revolutionary challenge to the government, which fluctuated in its constitutional plans. Moreover, the most educated part of society, the foundation of which was Western culture, challenged the government.

Thus, the advances of the government of Alexander with the liberal public ended poorly. The speech of the Decembrists could lead to bloody distemper and only the decisive actions of Nicholas saved the empire from very serious consequences.

Emperor Nicholas, having suppressed the speech of the Decembrists, was cold to the constitutional drafts and “froze” Russia. The following experience in the constitutional field was undertaken by the reformer Tsar Alexander II and ended no less tragically. 11 April 1880 Mr. M. T. Loris-Melikov, the Kharkov Governor-General appointed by the chairman of the Supreme Administrative Commission of Russia, presented the report “On attracting representatives of the population to legislative advisory activity” to Emperor Alexander II. It was about the establishment in St. Petersburg of two preparatory commissions from representatives of zemstvos and the largest cities of Russia, by analogy with the editorial commissions of 1859, regarding the solution of the peasant question. In essence, the empire was planning to introduce legislative activities of representative institutions. The sovereign imposed on the draft resolution: "Execute." However, the sovereign was mortally wounded by 1. The attack on the tsar was organized by revolutionaries-terrorists, fighters for “people's freedom” and a constitutional republic from “Narodnaya Volya”. The text of the "Constitution" remained on the table of the emperor.

Ascended the throne, Emperor Alexander III, an opponent of transformation and a conservative, instructed to discuss the project in the Council of Ministers. He was again approved. And on April 29, the new emperor issued his famous manifesto proclaiming the inviolability of the principles of autocracy. On the very first page of the report of M. T. Loris-Melikov, the king wrote: "Thank God, this criminal and urgent step towards the constitution was not taken." The new sovereign headed for unlimited autocracy. After the death of his father, Nicholas II continued this line, declaring the inviolability of the principles of autocracy upon assuming the throne in 1894.

Alexander III and Nicholas II, at the beginning of his reign, “froze” the situation again. However, the contradictions in the Russian Empire were fundamental and sooner or later led to the collapse of the empire building. The empire could have been saved by a decisive modernization “from above,” but not along the liberal (western) path, but in its own, original way. In fact, Nicholas II was to do what Stalin and his “iron commissars” did after the collapse of the Russian Empire.

When Nikolai succumbed to the influence of the pro-Western part of the government (Witte was a typical Westerner and an agent of influence on the “backstage of the world”), he only made things worse. The concessions of the liberal public could not save the old Russia. They only provoked the Westernizers and all sorts of revolutionaries, increased their ability to destroy the foundations of the empire. So, most of the press in the Russian Empire, controlled by liberal parties and movements, worked to destroy the empire. Stolypin was able, with incredible efforts, to postpone the collapse of the empire, but when the empire embarked on the war, it was no longer possible to save it.

In the first year (1906), lived in Russia under the conditions of “civil liberty” as a result of terrorist acts, 768 was killed and 820 government officials were injured. 19 August 1906. Stolypin signed a decree introducing military field courts, but presented it to the Duma only in spring 1907. During the eight months of the decree, 1100 people were executed. Trade unions were closed, revolutionary parties were persecuted, repressions against the press began. Prime Minister Peter Stolypin had to dissolve two Dumas before he received a Duma of a composition with which he could cooperate. Stolypin with a tough hand would bring order to the country.

As a result, the October 17 Manifesto cannot be considered a happy acquisition for Russia at the beginning of the 20th century, the opposition used it to intensify the struggle against the autocracy, which led to new blood, and the authorities did not know and did not understand what parliamentarism is opinion in freedom of the press. The Russian Empire entered a qualitatively different state, being absolutely unprepared for this. The bureaucracy, subordinate only to the king, was absolutely incapable of European-style parliamentarism. European ideas on Russian soil led to distortions and only worsened the situation (this is fully confirmed in modern Russia).

Thus, during this period we very clearly observe the peculiarity of the historical development of Russia. As soon as the power in the person of its supreme carrier practically takes on the democratization of the state and society in a Western way and “unscrews the nuts” of the centralized imperial system, liberal society immediately perceives this as evidence of its weakness and uses its new opportunities not for actions for the people, but for to politically (or physically) destroy the supreme power (not enough, in its opinion, democratic), and force unrest.