The founding day of the Navy of Russia. On the first pages of naval history

October 30 2015
16
"Maritime ships to be." It is with this phrase that the navy begins in Russia. In 1696, the 24-year-old Peter I made a decision, which is now called historical. October 30 Boyarsky Duma gives the green light to create a full-fledged fleet, which is designed to protect the borders of Russia. And the decision to create a fleet was by no means spontaneous. Bitter experience helped Peter to come to the conclusion that without naval military ships, success in the wars of that time would remain an unattainable dream. And an empire would have been created without a powerful naval component at that time? - a rhetorical question ...


And the bitter experience is, for example, about his first Azov campaign of the 1695 model of the year, which ended in failure for the Russian army. If we talk about the ships at the disposal of the Russian army at that time, the courts can call it a stretch. The army used rafts and planes to deliver food, ammunition and some personnel units. Naturally, about any warships speech at that time did not go. With the exception of the capture of two supporting towers in the area of ​​the Don mouth, which was the seat of the Ottoman fortress, the Russian army did not succeed in achieving serious success. Attempts to storm the fortress of Azov at first completely failed, then they managed to get through to the fortress, but in the end they still had to retreat. In October of the same year, the siege of Azov was forced to be lifted. However, the positions occupied earlier were left to three thousand archers, who took positions at the very support towers (armrests), blocking the Don for the passage of riverboats by transferring a kind of obstacle in the form of a rope.

Peter I realized that the victory in Azov was close, but she literally slipped out of her hands. One of the reasons for this slipping out was the absence of an efficient fleet, with which it would be possible to increase the pressure on the enemy, block the main directions of the approach of additional forces of the Turks and deliver a decisive blow.

It should be noted that the construction of cannon galleries under Peter was begun even before the first march on Azov. The construction itself took place in the village of Preobrazhenskoye. Further, the galleys in disassembled form were delivered to Voronezh, where the shipyards specially built for this purpose carried out the final assembly of the naval ships and their subsequent descent into the Don water. Speech about the gallery "Principium", the gallery of captain A.Veide and others. However, the ships did not have enough time to assemble, and therefore all the efforts of shipbuilders began to be directed towards the creation of military ships by the second Azov campaign.

Voronezh shipyard in 1696 year boiled hard work. Masters not only from Russia were connected to the process. Peter I was actively invited engineers from Europe, including Germany and Holland. It is in 1696 that the so-called Kumpanism begins during the construction of warships. Kumpanism is the distribution of “ship” forests between separate, as it were now said, companies (in the Petrovsky version - kumpanism). Kumpanism in the XVI century were called partnerships, composed of landowners, who were attracted to the construction and subsequent equipment of ships.

It is noteworthy that several church buildings engaged in the construction of ships at the Voronezh shipyard belonged to the church. The work of the kumpanism was subsequently recognized as ineffective, and Peter the kumpanism itself was abolished with the simultaneous introduction of a special tax. In the training manual “History of the Voronezh Territory” V.I. Panova provides the name for the tax used by the autocrat:

to repair those ships and to buy all sorts of ship supplies, and to the cottage to carpenters and blacksmiths of various craftsmen, joiners, sailors of blessed and fodder money.

In fact, it was one of the tax reform options, after which part of the funds went to the needs of the army (in this case, the fleet).

However, Kumpanism was abolished only in the 1700 year, and before that it was their direct participation that made it possible to create the first Russian warships. It should be noted that in the course of the work, the unauthorized felling of ship timber, including the cutting of oak and aspen near Voronezh, was prohibited. Persons who tried to continue fishing for wood on the middle and upper Don were expected to be executed.

Supervised the work on the construction of the first ships of the navy Anton Lavrent'evich Venevitinov, who collected a truly invaluable collection of documents relating to the construction campaign on Voronezh land.

The first warships (referred to as the "Principium", as well as the "Saint Mark" and "St. Matthew") were launched on April 2 on the 1696. Some sources call this date precisely the day of foundation of the Russian Navy. However, in the official naval literature, including reference books, it is still 30 of October that is preferred, when the above-mentioned Boyar Duma, not without the efforts of young Peter, decided to prepare a whole program for the construction of warships of various categories, including battleships young fleet did not exist. 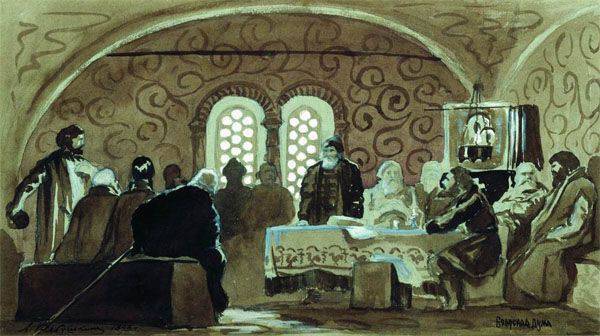 The decision of the Boyar Duma initially dealt with 52 ships, but subsequently the number of ships created according to the plan was brought to 77.

Returning to the history of Peter’s campaigns on Azov, it must be said that on July 19, the fortress was taken by Russian troops. The army of the Crimean Khan did not help the Turkish garrison (in historical sources the number in 1696 of thousands of people appears). Literally a week after the capture of Azov, Peter I orders the establishment of a navy base at Taganie Cape, where the glorious city of Taganrog stands today.

Speaking about the times of creation of the Russian Navy, one cannot fail to mention the true pride of the Russian fleet of those times - the God's Foresight 58-gun ship “God of Foresight” (“Goto Predestination”), which, according to archival documents, was created according to the drawings of Peter himself. In the materials of S.I. Yelagina “The History of the Russian Fleet. Period Azov - Voronezh ”(1997) The author is inclined to believe that Peter brought the drawings with him from Britain. In principle, were the drawings by Peter the Great or were reworked by Peter to create a ship capable of walking in shallow water, not so important.

This ship, which is difficult to call anything but handsome, was launched in May 1700. At the same time, it began to be built in November 1698. Peter himself in his notes made the following note: 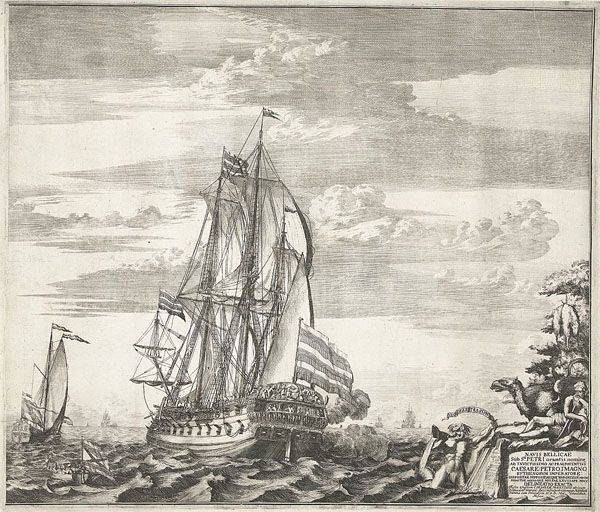 The fate of Goto Predestination is dramatic. For several years the ship did not leave the river Voronezh. His draft did not allow him to overcome the mouth. It was decided to move the ship to the "big water" with the help of camellas. In Azov, “Goto Pre-Discrimination” turned out to be only after 10 years after its launch in Voronezh. In 1711, the ship is attributed to a squadron of the Russian admiral of Norwegian origin Cornelius (Cornelius Ivanovich) Cruis. 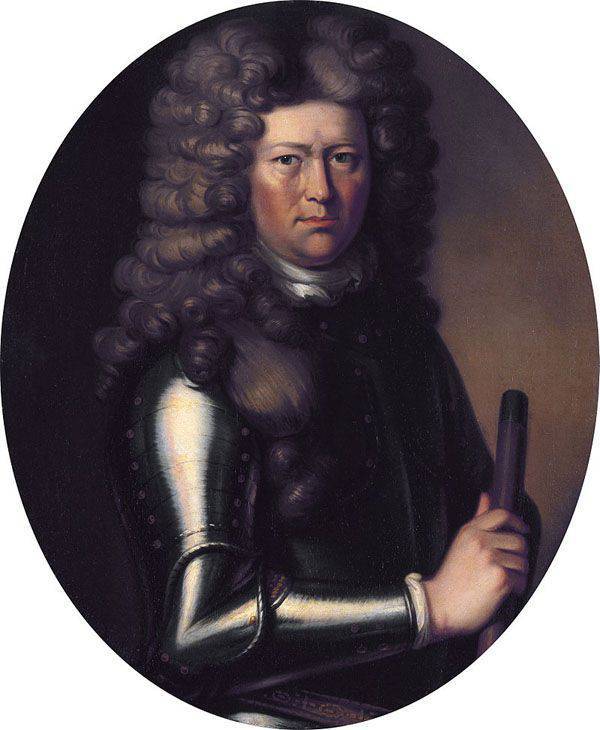 A year later, by coincidence, the battleship, along with three other ships, was sold to the Turks and ended up in Istanbul, where it was renamed “Kapudâne-i Mosko” (in the Russian version sounds like “Moscow capudania”). After 18 years after the construction of Goto Predestination, the Turks sold the ship for scrap, considering it unsuitable for participation in major battles and taking a lot of money for maintenance.

Surprisingly, after nearly three hundred years, “Goto Predisposition” (of course, a copy, but very accurate) reappeared on the Voronezh River. It is very symbolic - as a moment of historical justice and the connection of times. 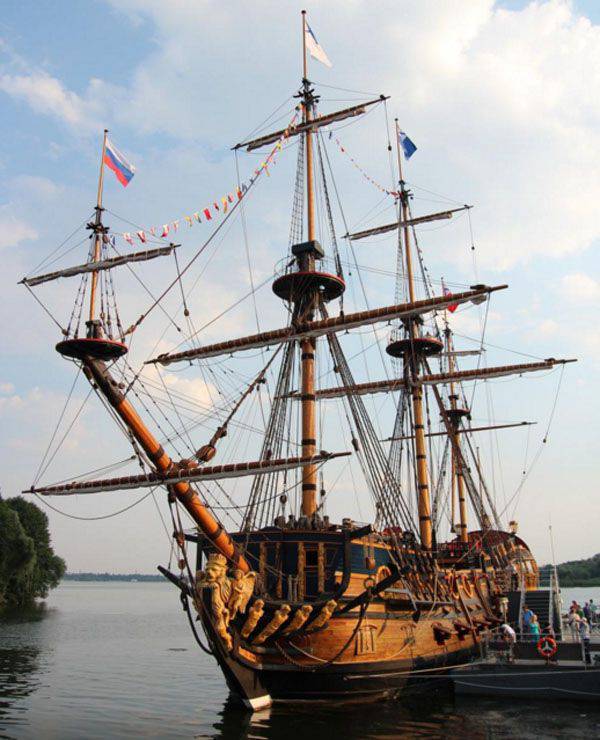 You can see the ship in the capital of the Black Soil Region, rightfully bearing the name of the cradle of the Russian Navy, from the foundation of which many long 319 years have passed.
Ctrl Enter
Noticed oshЫbku Highlight text and press. Ctrl + Enter
We are
Strugi "Bloody". Are the concepts of "teaching" and "security"?
Military Reviewin Yandex News
Military Reviewin Google News
16 comments
Information
Dear reader, to leave comments on the publication, you must to register.