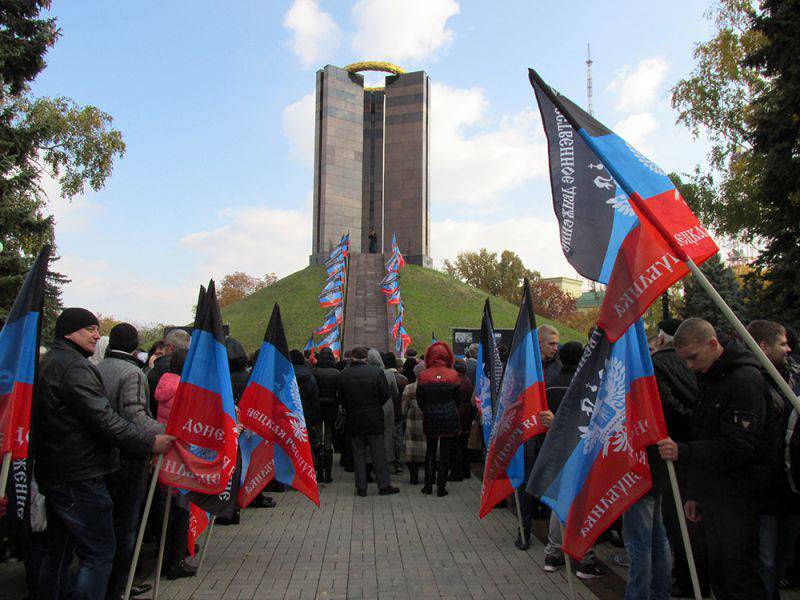 There are lovers blaming the Donbass for “hatred of Ukraine” and even “for everything Ukrainian” - I have repeatedly met such words on the net. And it happened to me that such anonymous messages came - “You are there, in Donetsk, you hate everything Ukrainian.” But in fact, the attitude towards Ukraine in the Republics of New Russia - the DPR and the LPR - is absolutely not hostile. Hatred deserved only the bloody junta, which came to power through a coup, leads a criminal war against peaceful cities and distorts history.

Residents of Donbass, like Crimeans, actively opposed forced Ukrainization, but they sacredly honor dates that are really dear to the Ukrainian people. One of these dates - October 28, the Day of the liberation of Ukraine from the Nazi invaders. 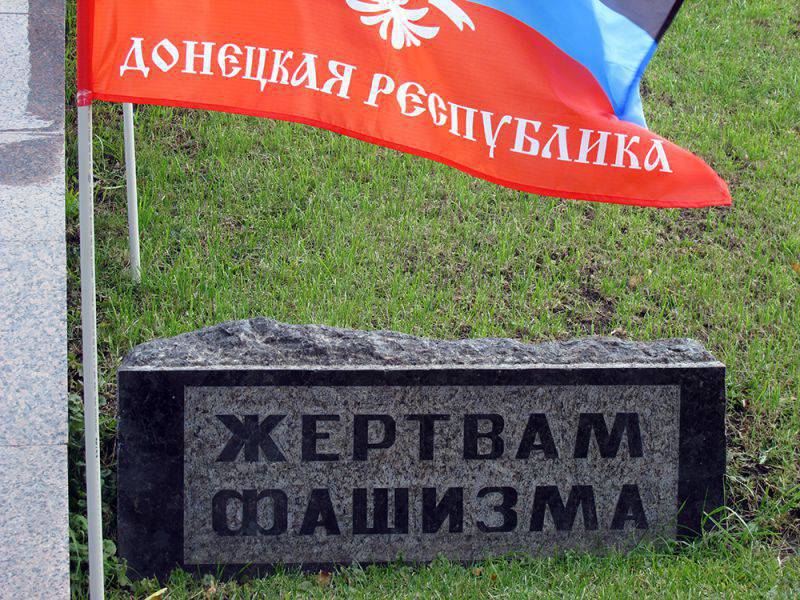 The head of the DPR, Alexander Zakharchenko, in his address to the citizens of the Republic on the occasion of this important anniversary, said: “I believe that the Ukrainian people will overcome the fear with which they are managed by the current owners of Kiev, will wake up and return their country to the path of unification and creation, and not destruction. And then, perhaps, in Ukraine, October 28 will celebrate a double holiday: the Day of Liberation from Nazi Invaders in 1944 and the Day of Liberation from Bandera Revanchists in Our Days. ”

In the Park of Slavic Culture in Donetsk is a memorial to the victims of fascism. October 28 near him was a rally. Donchans - both representatives of the older generation, as well as young people and even children - came to the monument with flowers. Someone has no money even to go to the flower shop, but they found a way out of the situation - they brought modest bunches of those flowers that they managed to pick during this autumn season. It doesn't matter how much the brought flowers are worth - it’s important that they are from the heart ... 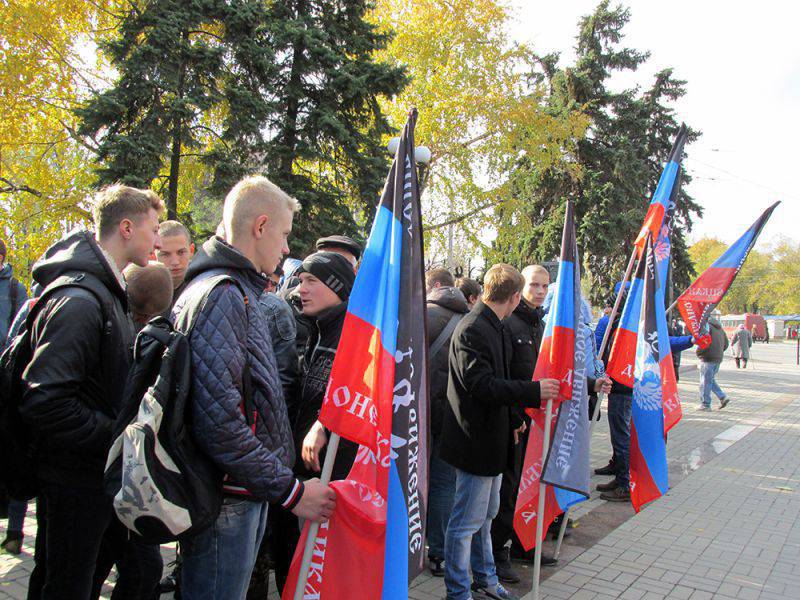 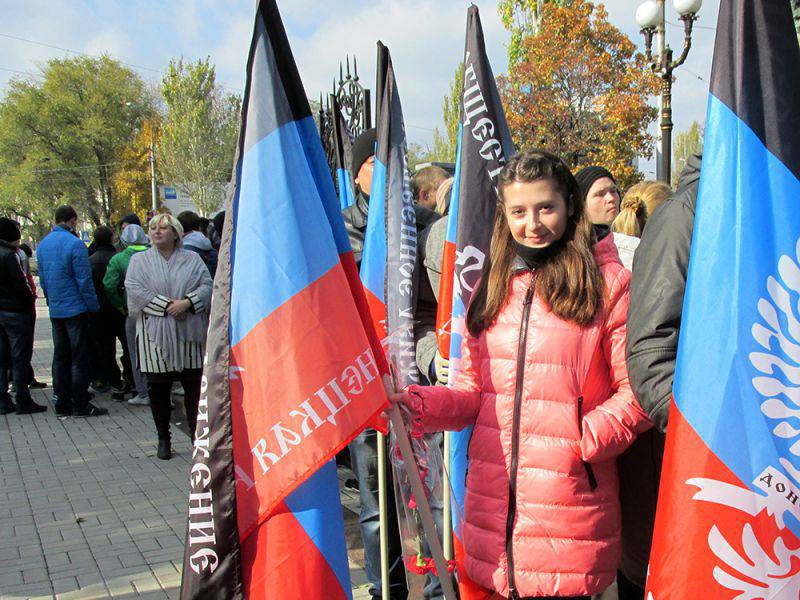 71 a year ago, October 28 1944, the territory of Ukraine was completely liberated from the Nazis. Veterans of the Great Patriotic War, who came to the rally, are now forced not only to share their memories of those harsh, powder years. Because they now saw the war again. Even shelling and all other hostilities associated with hostilities do not cause them so much suffering as the fact that today's Ukraine cynically spat out their feat. 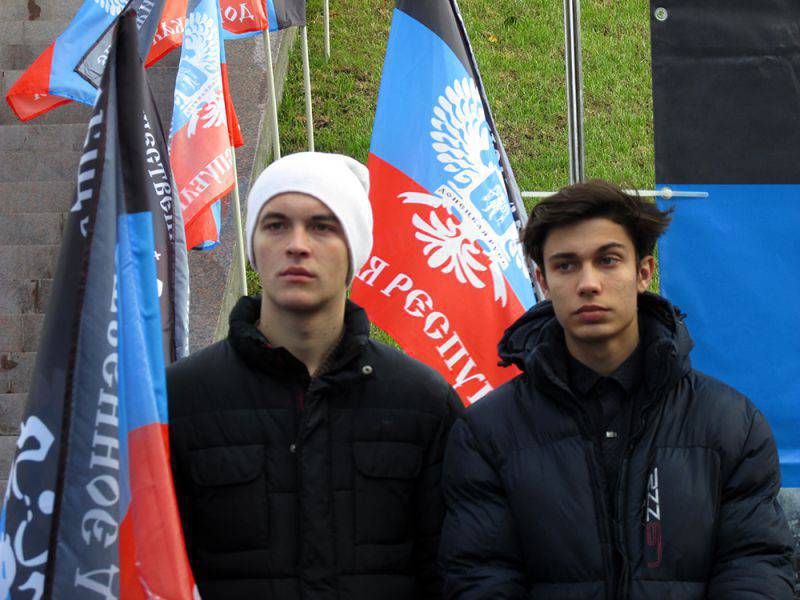 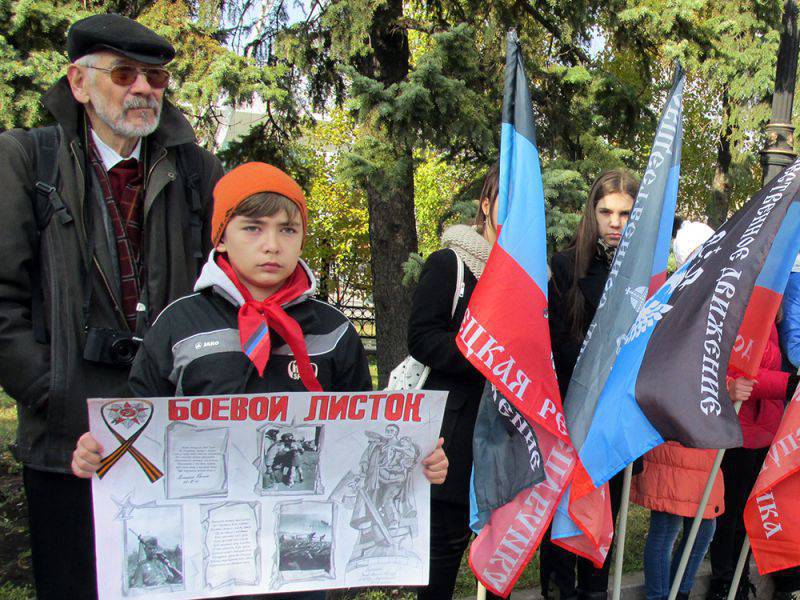 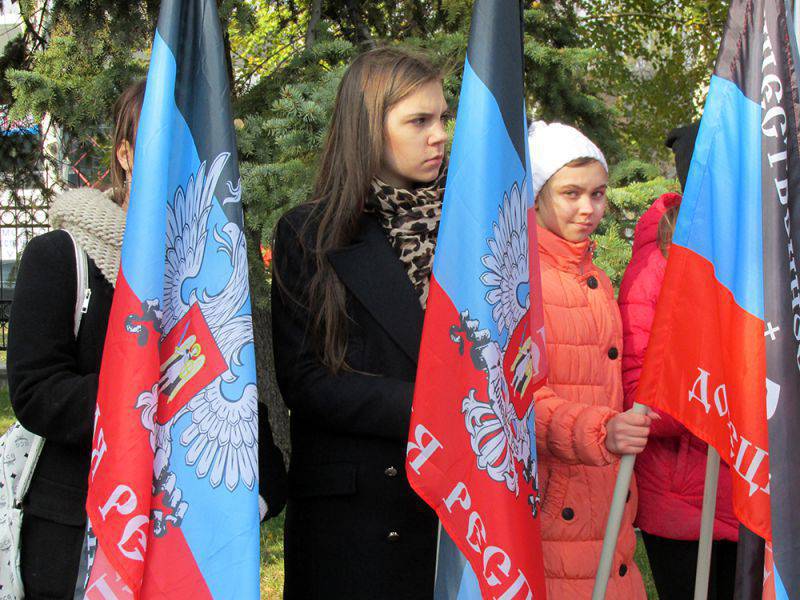 Speaking veteran Vsevolod Kosorez wished that the new fascist dictatorship in Ukraine was overthrown as soon as possible. “I hope to live to see this day,” he said.

Deputy of the People’s Council Ekaterina Martyanova in her speech expressed regret that today's Ukraine does not remember its history. There are now other "heroes" - murderers of women and children, such as Bandera and Shukhevych. But, the deputy recalled, the Kiev authorities want to demolish the monument to General Vatutin - the man who personally liberated Ukraine.

The leader of the Young Republic movement, Sergei Kondrykinsky, said that millions of Soviet citizens had given their lives in the fight against fascism. Then they were not divided by nationality or by linguistic characteristics - everyone was equal. But now in Ukraine these heroes are humiliated in every way. It hurts to look at it, you can not allow this. 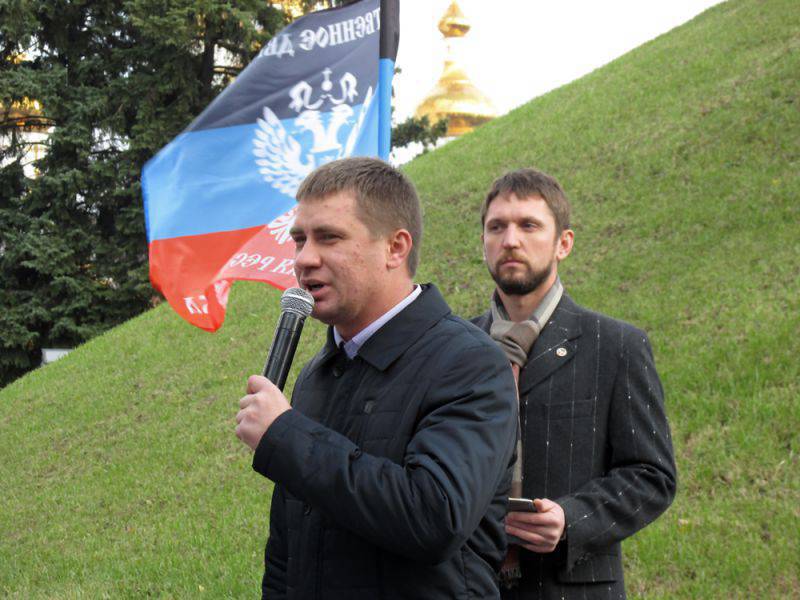 A small mobile photo exhibition about the events of those years was launched. 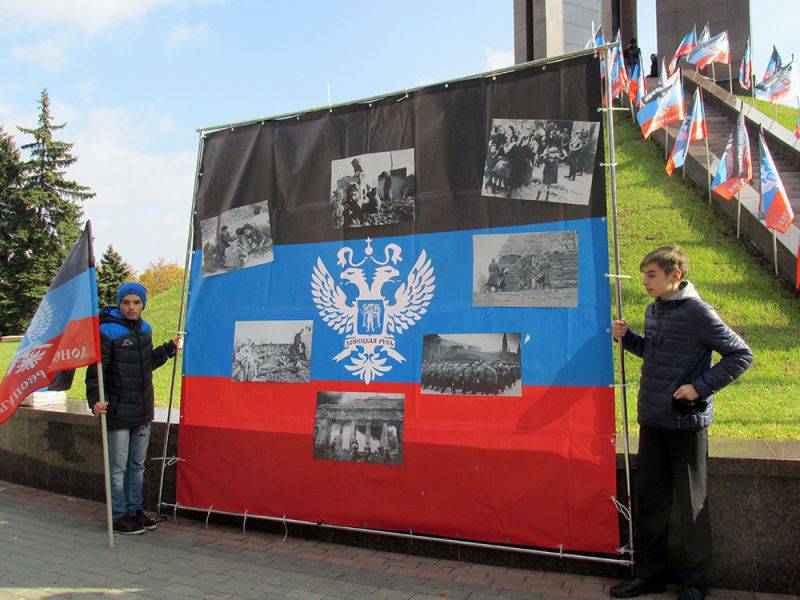 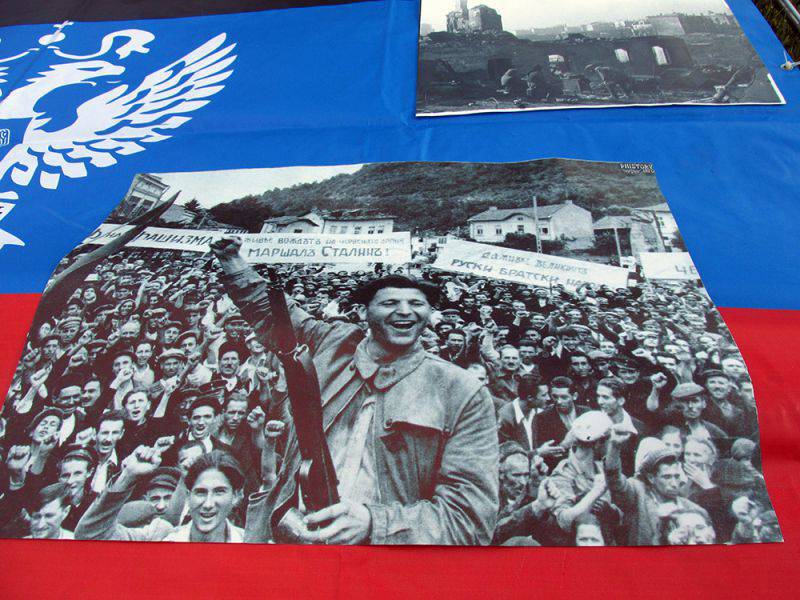 After the speeches, all those who had flowers, laid them to the memorial. However, some people have already managed to give their bouquets to veterans. 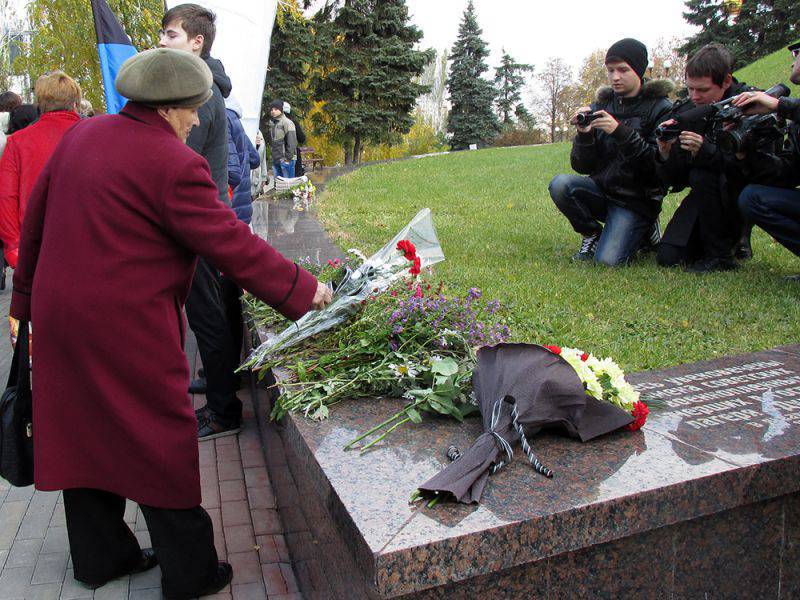 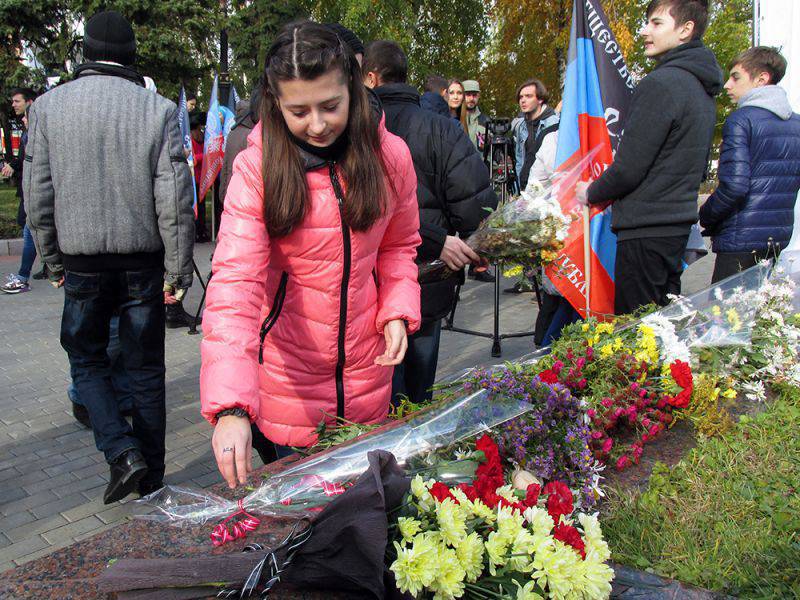 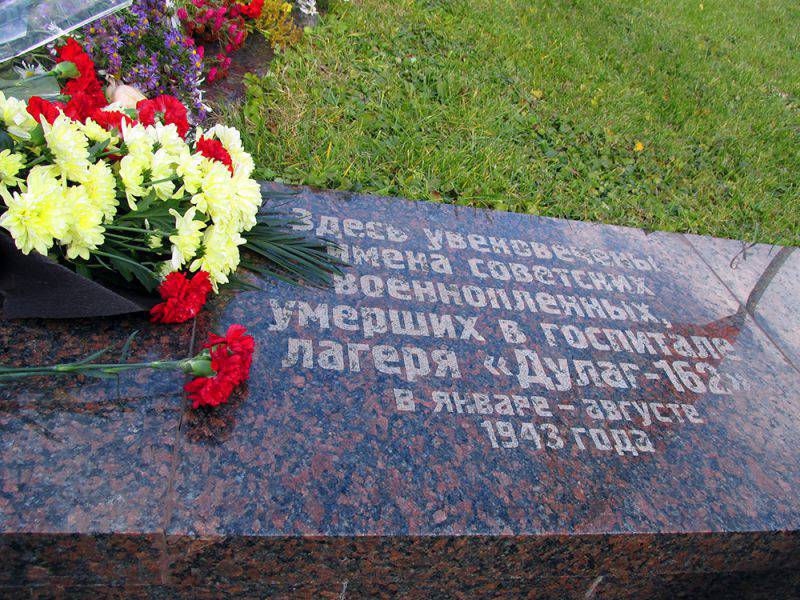 By the way, it happened that the holiday itself - the Day of the liberation of Ukraine from the Nazi invaders - was established by Viktor Yushchenko. In fact, an illegal president who also came to power through Maidan. But that Maidan was still far from the present one - it did not entail rivers of blood ... And then they could even meet public initiatives of veterans of the Great Patriotic War. They are still indiscriminately not called "Colorado" and "wool".

However, for the residents of Donbass absolutely no difference who exactly established the memorable date. For them, something else is important - it is important that the great Victory was accomplished, the path to which was incredibly difficult. And the liberation of Ukraine was an important milestone along the way. Therefore, people came to the monument with flowers.

... If you climb the stairs of the memorial, the Eternal flame burns there. Despite all the difficulties with the economy, with gas supply - the fire burns. 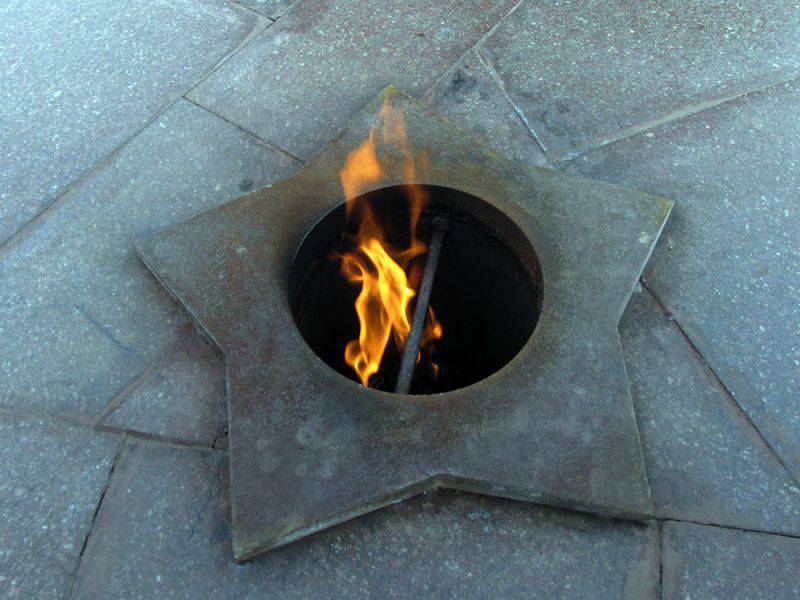 Oh, how many times before Maidan, I had to see the extinct Eternal Lights on Ukrainian territory! So the notorious “independence” brought to such an absurd economy.

But this is only a small part of unconsciousness. The one that you can still forgive. There is something that is much worse - the notorious Bandera marches with Nazi slogans. And bans on Soviet symbolism, on St. George ribbons, even on the Victory Banner look more cynical (the decision was recently made by the court in the Hero City of Odessa, which is now under the heel of new occupants).

Against this background, a special blasphemy is the attempt of the non-president Poroshenko to cling to the great history, distorting and defiling it. It would be better if he didn’t hypocrite at all - since he welcomed the marches of the Nazis and, under his leadership, prohibited the Victory Banner, he would lead this line consistently. But he decided to speak on the occasion of the Day of the liberation of Ukraine from the fascist invaders. And in his speech, he unceremoniously compared the feats of veterans with the actions of the current punishers in the Donbas!

About the most important thing he “forgot”. Warriors of the Great Patriotic War - freed. Punishers on his order came to the Donbass to kill, rob, torture and rape.

In addition, Mr. Poroshenko attributed the liberation of Ukraine exclusively to the Ukrainians, “forgetting” another important thing - then there was a united Red Army, in which all the peoples of the Soviet Union fought shoulder to shoulder. Including the Russian soldiers, who today the Neanderís junta is trying to denigrate in every possible way.

Hypocritical meetings in the occupied Slavyansk and Mariupol were stuffed with similar rhetoric, where local Gauleiters also tried to expose the Russian people as an aggressor and thus distort and rewrite history in the Maidan fashion.

It was not this day that should have been remembered by Mr. Non-President, and the other one was when the first meeting of the Nuremberg Tribunal took place. Because this tribunal from the depth of years today “cries” for Poroshenko and his accomplices, who unleashed a criminal war.

Ctrl Enter
Noticed oshЫbku Highlight text and press. Ctrl + Enter
We are
Zakharchenko in Debaltseve: "This city for us is a symbol of resilience, a symbol of struggle"Donbass Liberation Day-3. "You survived and won, Donbass"
Military Reviewin Yandex News
Military Reviewin Google News
25 comments
Information
Dear reader, to leave comments on the publication, you must to register.