"Pathology of protest." Repentance as a natural result. What's next?

October 29 2015
47
It was interesting to watch the documentary "Pathology of Protest", created by the NTV team. Happened. It just happened. Moreover, I myself, being an indifferent man, I hope that events similar to the reaction to the “Anatomy of Protest” will follow after him. Let me remind you that then the organizers of the riots in Moscow were Udaltsov, Razvozzhaev and his followers. 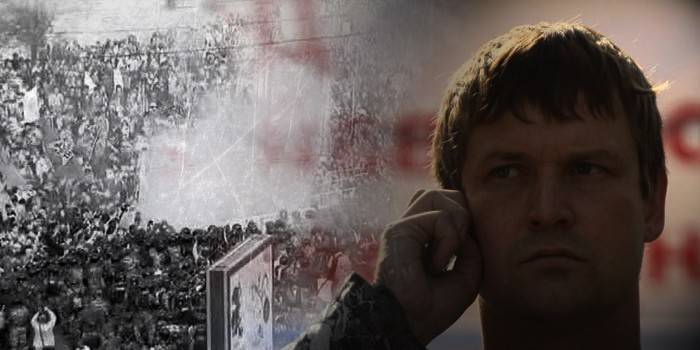 It is difficult to say how this happened with the NTV staff, but the fact is that Razvozzhaev gave the camera very specific explanations of what they planned to do then in Moscow. And thus confirmed many of the features shown in the "Anatomy".

We did not know before that, that all these are frank enemies of Russia? They knew.

We did not know that the funds sounded in the film and NGOs, like the American Foundation for the Support of Democracy, are ready to finance any rabble ready to work for the triumph of world democracy? They also knew.

The only thing that can be called unexpected in principle is the recognition of Razvozzhaev that they wanted to fuck money from the sponsors of Targamadze. It seems like nothing personal, just business. But it sounded like a rip off masks. And instead of national-patriots who are ready to fight for the idea, in actual fact our heroes turned out to be ordinary selling souls. Which, in general, for a dollar give a dozen.

The figure in 150 of thousands of dollars sounded by Razvozzhaev is scanty in comparison with the sums that were included in the Ukrainian project. Well, I must admit that our turned out to be cheaper than Ukrainian colleagues. After all, according to the confessions, for these modest sums they were actually ready for the same actions as the dogs. But not in Kiev, but in Moscow. And the same riots, and the same protests, and tent camps. Scenario one. But the fact that our leftist protesters turned out to be overt cheap ones is somewhat depressing. Well, or Razvozzhaev pretends that he, Udaltsov, Navalny and other cheap stuff.

Since the release of the film, almost a month has passed 2.

In general, I would like to see the reaction to it. As was the case with Anatomy. Tell me, what should it be? And correspondingly. If the RF IC after the first film opened criminal cases and put those who followed, I call this a good appropriate response.

"Marsh business" is closed, but not dead. As follows from the film, the "kind and caring" friends of our opposition continue to carefully cultivate good, helping the families of "prisoners of conscience." And these "friends" cannot be called Russia's friends. At least, this Russia, in which we live today. But they need another Russia. With the Maidan, tent camps, with all the special effects that we see in Ukraine.

And not far off, and the moment when all the persons involved in this case will be released. It is clear that they will be watched by those who are supposed to. Frank lumpens and losers from among the "swamp heroes" are unlikely to be able to normalize themselves in society after their release. And most likely they will be helped by the same “kind and caring” people. And let us not talk about the fact that the money to the volunteers Pelevina bear compassionate Russians. In dollars. Not funny.

Is it time to think about this issue? After all, it is easier to minimize the possible harm from Mrs. Pelevina and similar “kind-hearted” people and those who give her money than to start the next “swamp affair”. And I would not want to start. Speaking the language of the village, it is easier to remove the weed from the garden until it has given seeds.

And we still have enough weeds. Indeed, many of those named in the film continue, as if nothing had happened, to sow the seeds of democracy and to fight for it in every way. For example, Prima "Rain" Sobchak. Or claiming to be the Russian clown-liar Navalny.

If you look closely at his election campaigns in many cities of Russia, then clever people who comment on this on the Internet, it is clear that Navalny does not represent anything. She rides through the cities, brings absolute nonsense at meetings. Thank God, more and more people are beginning to understand that only a fighter for their own bright future remained of the fighter for the bright future of the country.

But the question arises: who is financing his travels around the country? Again, we will not be serious about Navalov’s requests to “give him a lift to another city,” as was the case in Novosibirsk. For after Novosibirsk, he went to Kostroma.

On the one hand, it is clear that a loser and a bortsun for a bright future, Navalny is doomed to a complete collapse of his political career. But he travels around the country, which means that someone needs it. But do Russians need this?

In general, we were somewhat distracted from the affairs of internal events in the Middle East. And do not forget about them. Syria is far away. Ukraine is much closer. And Russia is here. And all those who think of themselves in some other Russia, clothed after the pattern and likeness of Ukraine, cannot be forgotten.

It is impossible to forget for a moment who Navalny, Udaltsov, Lebedev, Sobchak, Pelevin, Yashin, Verzilov, Ponomarev, Kasparov, Romanova, Borshev, Svetova are. Yes, their name is legion, we also know the name behind them. And once again recall that the loss of vigilance ends on June 22 is not just possible, but necessary. And to those who are waiting for the moment to stab in the back - especially.

Of course, albeit belated, Razvozzhaev’s some remorse is welcome. Passed what is called, in full. And better late than never. Whatever his deed is. At least, these are some absolutely not superfluous arguments for intensifying the struggle against those who can be openly called the enemies of Russia. The list above.

This raises the last question. To the Federal Security Service. The structure, which is responsible for ensuring the safety of Russians from the gentlemen of the list. Which (most likely, longer) in the FSB is already there.

Today we live in a very difficult time. The time when every new day can bring changes in our lives. And these changes, as the practice of recent events shows, are not always positive. Dear comrades, is it not time to get serious about gentlemen who work in Russia and get paid in the USA and other countries? After all, as it was sung in one song, “tomorrow may be late” ...

Ctrl Enter
Noticed oshЫbku Highlight text and press. Ctrl + Enter
We are
Results of the week. "This is not for you ..."Bashar al-Assad: In Syria, not the “revolution” that the enemies are talking about, but the revolution of the army and the people against terrorists
Military Reviewin Yandex News
Military Reviewin Google News
47 comments
Information
Dear reader, to leave comments on the publication, you must to register.