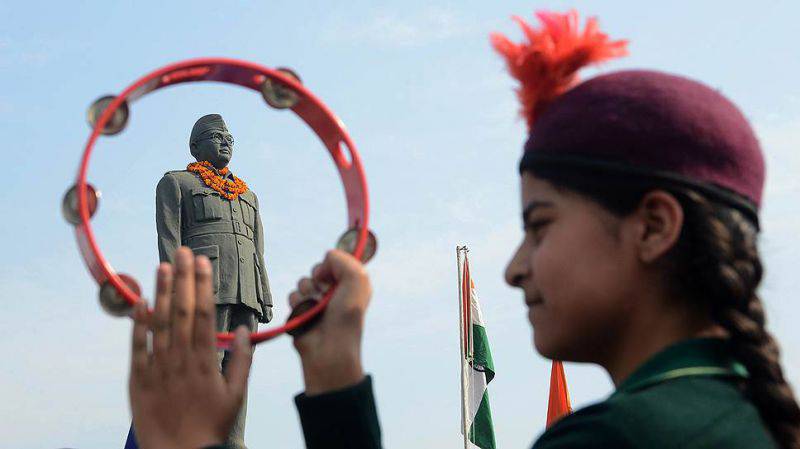 How India prepares to revise its history

I have been following this incredible story unfolding in Delhi for a long time. And now - the message that the Prime Minister of India, Narendra Modi, during his visit to Russia in December, would ask Moscow to declassify documents about Subhas Chandra Bose. Well, the leaders of other countries will ask about the same. Probably, this will be Germany and Japan, although the matter will not be limited to them. The Bos is such an amazing figure that it managed to shine in all the countries mentioned and some others, and then ... disappear into obscurity. But he could have become the father of Indian independence - next to Mahatma Gandhi instead of Jawaharlal Nehru ...

Let's say right away that this story may have many faces. One thing is interesting to the Indians, the other to the Russians, the third to someone else. I will start with the Indian face of the impending scandal, simply because otherwise you can’t explain the scale of what is happening and who the person whom the Indians call Netaji today is the leader, the respected leader. Bos, for a start, was twice (in 1938 and 1939) elected president of the Indian National Congress, which we know only as a party of the very Gandhi and Nehru. Before that he was the leader of the youth wing of the Congress. Next - was thrown out of the leaders for one significant reason. Bos was for an armed struggle with the British colonialists. And Gandhi and Nehru - for non-violent.

That is, we have something like the Indian Trotsky. Now imagine what it was like for the average Soviet person to find out in the 90s that Trotsky is not a political prostitute and the face of every evil, not a minor character, but a person who in his role in the events of 1917 and subsequent years was sometimes more important than Lenin. Here it is now India.

Bose, like Trotsky, was an extremely charming and showy person. The first half of the 20th century gave rise to an incredible number of bright, passionate people with amazing and not always well-completed biographies. Bos, having escaped from a British prison in India in 1940, was in Moscow. Moscow then was not yet an ally of Great Britain; on the contrary, London actively set Hitler on the USSR. But to finance Bos' armed struggle against the British in India ... it seemed somehow too exotic.

And frustrated, Bos went to Hitler, where he headed the "Indian Legion". Then the Germans changed their minds to storm India and told Bos that this British colony was now Japan’s responsibility. Well, Bos went to Tokyo, became the leader of the army of the Indian military from among the Japanese taken prisoner in Malaya (they served there in the British colonial army). The Japanese, by the way, were already approaching the Indian borders. But then came the 1945 year. Bos died in a plane crash on 1945 occupied by Japan, Taiwan in August.

So this is not Trotsky, but rather an Indian general Vlasov? But wait. Look what's been going on for two years already around this person in India itself. Recall that in May 2014, the Congress suffered such a defeat in the elections that it may never recover from it. And then many supporters of the victorious "Bharatiya Janata Party" (BDP) demanded: we are in power, let's pull out the main body of the skeletons of Congress. What did the Congress hide for all these years, why did it secretly (and this is a fact) everything that is connected with the personality of Bos and especially with his death?

We will continue quoting one of the most angry articles on this topic from the Delhi newspaper "Pioneer", which has long been the ideological center of the BDP. "Declassify these files and open Nehru's Achilles' heel ... a terrible legacy of cooperation between left-liberal media, scholars and the political establishment ... a disgusting history of the transfer of power (from the British to Congress in 1947) will open ..." over and over again it was possible to read about the fact that it is completely unknown whether the hero and leader of the liberation movement burned down in an airplane in Taiwan, or lived under the guise of a Hindu guru before 60 in India, or ... was abducted by Stalin’s agents and disappeared in camps Siberia.

What is it all about? It is not at all that they want to offend Russia. It is clear that in 1945, Bos was in the blacklists of all the victorious powers (he fought for Hitler and the Japanese!), And if any of them had arrested him, he would not have seemed little. But the blow is directed to the other side. Among conspiracy lovers, there is a version that not so much the English as Nehru and Congress secretly (cowardly!) Asked Moscow to deliver them from an opponent. Otherwise, why did they refuse to declassify these files, hinting that then relations with "friendly powers" would be complicated? Although on suspicion not only Stalin, but many other leaders.

But the point is not in them, but in the fact that the current Congress, which is still headed by descendants of the Nehru-Gandhi dynasty, is morally finished off. And another thing is the change of national ideology, which, in fact, without that occurred in 2014, was supported by the voter, and in the revision of its history by the Indians. Ideologists from the BDP claim that the Nehru dynasty - Gandhi - are neo-colonialists who conspired with the British, imposed on India a mixture of left-wing liberalism, socialism, and pro-westernness - in spite of the formation of the national self-indian people. I understand that this is a shock for Russians, whose fathers and grandfathers deified Indira Gandhi, but in fact not everyone loved her in India, they considered her a soulless iron woman, called "black widow" ...

The obvious fact is that the BDP by its ideology, world view is closer to Russia than the Congress, relations with which in recent years we have had some strange, sort of good, but unsaid, cool ones. And with China, by the way, the government of Modi has a much better relationship than the former. But how can we deal with an unexpected assessment of the role of this Trotsky, or Vlasov? This is after all so relevant for us World War II.

And here it is necessary to answer the almost impossible question: what is worse - Nazism or colonialism? Evaluation of the role of European quislings (the head of the Norwegian government, Hitler's ally) is simple and one-dimensional: they helped the aggressors and invaders. But then Europe, and in fact the British for India were also aggressors, occupiers and enslavers.

There is nothing new in this situation. Let me remind you that when the father of independence, Aung San, came to power in neighboring Burma to India, then in the USSR they were not very upset that during the years of the Japanese occupation he served as occupant minister of defense for the occupants, then, however, he quarreled with them and began to work on the English. And Anwar Sadat, the president of Egypt, and Sukarno in Indonesia? And the Soviet leaders were very friendly with them and their surroundings.

In this whole story, of course, not the detective scenes of 70-year-old, but today's India are interesting. The world of our fathers and grandfathers was simple: the communist system plus many of its friends, and once friends, almost the communists will become them. Charming people, after all, and especially Nehru and his daughter Gandhi. But it turns out that now the Indian nation or its important part of these of our friends is ready to evaluate somewhat differently - as symbols of pro-Western globalism. Is this good or bad for us? At least difficult. But interesting.