October 27 2015
129
Military commanders, workers in NATO, as well as those who previously worked there, and experts who have worked for a term in the State Department, declare the near demise of the North Atlantic Alliance. The Russians will "kill" NATO. Now they are testing airplanes, ships, building military bases everywhere, and this is a “great challenge” that the West has nothing to answer. The fact is that the peoples of other Western countries do not want to quarrel with the Russians, but to be friends. 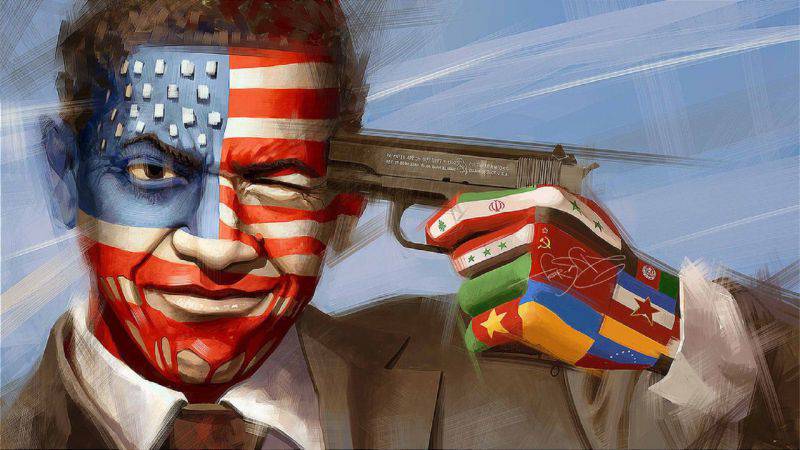 NATO’s "beginning of the end" was written by Charles Hoskinson in "Washington Examiner".

Russian President Vladimir Putin has managed to make the Obama administration’s idea of ​​a “reset” of US-Russia relations become a “wedge” that, according to military experts, the Russian president drives between NATO member countries.

It's no secret that Russia, “by annexing Crimea to Ukraine in March 2014 of the year,” increased pressure on NATO, and especially on the Baltic countries (Estonia, Latvia and Lithuania), which were formerly parts of the Soviet Union. The leaders of the alliance hurried to find ways to resist the new, "more aggressive position of the Kremlin" and reassure the members of the alliance regarding their security.

However, current and former officials, and with them some experts from Russia, warn that Putin’s actions are aimed at splitting the Alliance and revising international security ties. It seems that the situation is moving wherever Russia needs it.

“We are faced with one of the top strategic tasks of the post-cold war,” said retired Marine Corps General James Jones, the former commander-in-chief of the combined NATO forces in Europe. Previously, in 2009-2010, this man served as White House National Security Adviser.

“I think,” he told the publication, “that this may be the beginning of the end of the North Atlantic Treaty Organization. I think this is serious. We simply cannot sit back and allow this to happen. ”

The article says that now Russia is building a whole “steel arc” - a network of bases on the “external flanks” located in the area from the Baltic to the Black Sea. Such a strategy means confrontation with NATO states, believes Admiral Mark Ferguson, commander of the US Navy in Europe and head of the NATO Allied Command in Naples.

One of the key problems of the alliance is a convincing response to the new Russian threat. Member States must increase defense spending after two decades after the end of the Cold War.

It was not for nothing that October 12, in a speech at the NATO Parliamentary Assembly in Norway, Secretary General Jens Stoltenberg said that the time had come to “invest in our defense.”

According to him, the concept of deterrence, even though it seems “old-fashioned,” gives the West enough strength to “prevent others from attacking.” And this last - "not at all old-fashioned." Being strong, the West can not be afraid of war. The power of NATO is required not to unleash wars, the Secretary General believes, but to “prevent” them.

There is one more “serious threat to the stability of the alliance,” according to the article by Charles Hoskinson. This “threat” is the activity of state-owned and state-sponsored global media, which conduct propaganda campaigns aimed at promoting the Kremlin's point of view. The trouble is that NATO representatives have so far failed to find the principles of an “effective response” to Kremlin propaganda. In the meantime, the “campaign of psychological warfare” has reached NATO countries. And here are the results: a survey of the Pew research center showed that the majority of respondents in France, Germany and Italy are against the idea of ​​fighting with Russia - that is, using military force to protect another NATO country.

Such public opinion, the author believes, represents a "serious threat to the principle of collective self-defense." After all, such a principle is the "cornerstone" of the alliance.

“We have to use a much more effective strategy,” said Heather Conley, a former State Department official currently working at the Center for Strategic and International Studies.

“This is a great challenge of our time, and we do not have an effective response to it,” said the expert.

Of the statements cited in the Washington Examiner article, the statements of Admiral Mark Ferguson, the commander of the US Navy in Europe and the head of the NATO Allied Command in Naples are of particular interest. What kind of "steel arc" did he mean?

It turns out that this "arc" is a combat-ready Russian navy, which is capable of challenging the NATO bloc.

“We see signs of the emergence of a more aggressive, more combat-ready Russian naval fleet"- quotes the admiral "Voice of America". A military official explained: “This is a naval capability that is directly intended to compensate for the obvious advantages of the fleets of the NATO countries. They give us to understand and warn that they intend to challenge our dominance at sea. ”

In addition, speaking at a meeting of the Atlantic Council, Ferguson said that the renewed army of the Russian Federation increased its potential compared to the times of the Cold War. She has the ability to respond: “The ability to respond has become a new element. We see that Russia's actions now fully include such elements as speed and strategic surprise. ” Finally, “the language that comes from the Russian military reflects the mindsets and actions characteristic of a direct challenge and confrontation with NATO”.

“The creation of a steel arc from the Arctic to the Mediterranean testifies to the new militarization of the Russian security policy,” Mr. Voice of America quotes Mr. Ferguson. “Starting from new bases in the Arctic and further in Leningrad in the Baltic Sea and Crimea in the Black Sea, Russia is installing advanced air defense systems, cruise missile systems and new platforms.” “It also increases the potential for power projection in the naval sphere. Their base in Syria now gives them such an opportunity in the eastern Mediterranean, ”the admiral noted.

According to him, the strategy of "blocking access to the sea" is directed against NATO naval forces.

He made a speech about the "threats" and another admiral.

The increased activity of the Russian fleet and "other threats" is a reason for reviewing NATO’s naval strategy, believes American admiral John Richardson, who recently headed the headquarters of the US Navy. Reports about it RIA News" with reference to The Wall Street Journal.

Mr. Richardson told senior naval officers in Venice that Russia had shown an increase in skills in controlling ships, and at the same time showed "a desire to resort to methods of military coercion."

“Their combat activity has grown to a level that we have not seen for more than ten years. The level of their training is growing, ”the admiral stated.

According to Richardson, NATO and the EU should strengthen coordination in order to "more effectively" use their naval forces. Without well-coordinated actions, neither the question of “containing Russia”, nor the migration issue will be solved effectively.

So, to add in conclusion, there is hope that the NATO bloc will split not the “threat to Russia”, but the will of the peoples of the Western countries who do not approve of the alliance’s confrontation policy with Russia. Neither the Germans, nor the French, nor the Italians, as the Pugh poll shows, do not want to fight with Russia, defending some kind of "other NATO country." Sooner or later, this position of voters will affect the election results: new politicians will come to power in the EU countries, ready to lend a hand to friendship to Moscow.

We are in Yandex Zen
Results of the week. "The truth is easy and pleasant to say ..."
Will Russia try to get Estonia, Latvia and Lithuania? ("The Financial Times", UK)
129 comments
Information
Dear reader, to leave comments on the publication, you must to register.