October 26 2015
35
On the eve of Ukraine, there was another series of Maidan performances, called the official Kyiv “local elections”. The series has stood out for the glory. Mariupol has become one of the truly hot spots on the map of the central electoral committee of Ukraine. Most polling stations (205 of 213) in this city were not open by the time voting began. At several polling stations, voters who came in were ordered to sign in a special PEC document (precinct election commission) that they allegedly received ballots and voted, although the ballots were not delivered to the polling stations.


Video of the Mariupol portal:

Very peculiar elections were held and a number of other localities. Thus, in Odessa, at one of the polling stations, a man was dressed in the costume of the character of the movie “Star Wars” Chewbacca (Chui). Moreover, both the detention itself and the comment of the head of the press service of the Odessa police Anastasia Yakubenko are remarkable. Quote UNIAN:

Chewbacca and Darth Vader arrived at the station in a car (it sounds already masterpiece - note "VO"). Stopped and blocked the movement of the rest of the transport. The police left for the call. A protocol was issued. 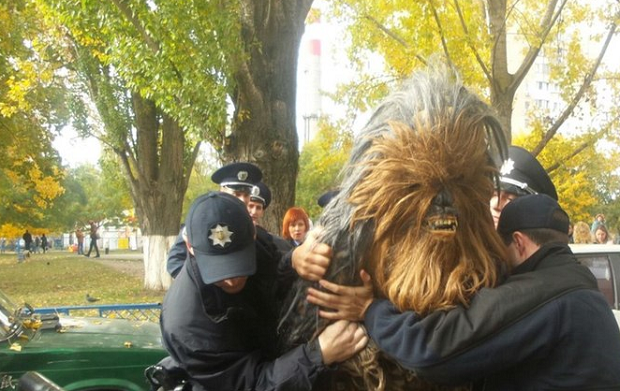 For reference: according to the initial information, a man named Darth Vader was registered as a candidate for the post of mayor of Odessa. However, it turned out on the spot that there was no such candidate on the ballots.

According to the newspaper "Dumskaya.net", some time after the arrest, "Chewbacca" was released. A photo: 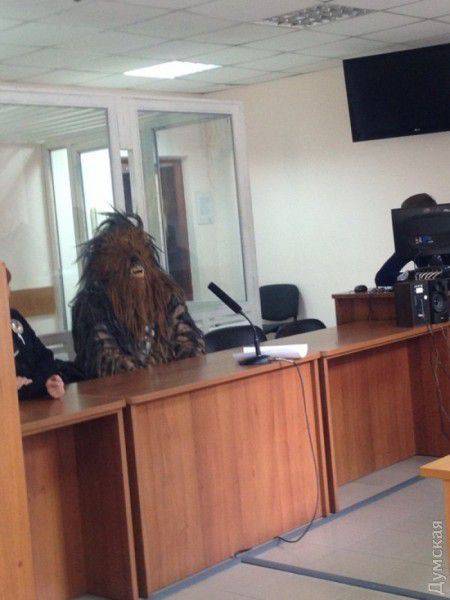 The incident occurred during the elections in the Rivne region. According to local media, "while trying to vote in a stall, an 80-year-old resident of the village of Korytnoe died." Another death was recorded at a site in the Ivankovsky district of the Kiev region. There, a woman 63-x died. At the same time on the site especially emphasize that the voter managed to still vote.

And in the city of Krivoy Rog, the chairman of one of the local PECs declared a loss of seal. Observers told the media that the chairman herself had taken the seal out of the building.

The above-mentioned Mariupol, like Krivoy Rog, was noted by another scandal. Immediately before the elections, it was suddenly discovered that the printing press that printed the bulletins spoiled about 8 thousands of printed items. At the same time, the damage to the bulletins was called conscious, accusing Mr. Akhmetov, who owns the printing house. Bulletins in the "fire" order had to be reprinted.

In total, over a hundred thousand calls were made to the hotline numbers on voting day in Ukraine (attention!) With allegations of violations. Observers compiled more than 300 acts on violations during the voting. This is a new record of Ukraine, which means a new Peremoga! ..

Ctrl Enter
Noticed a mistake Highlight text and press. Ctrl + Enter
We are
Reports from the militia of New Russia for November 3 2014 of the yearThe situation in the south-east of Ukraine. Chronicle of events 11 May
35 comments
Information
Dear reader, to leave comments on the publication, you must to register.