Autumn concerts in the hospital 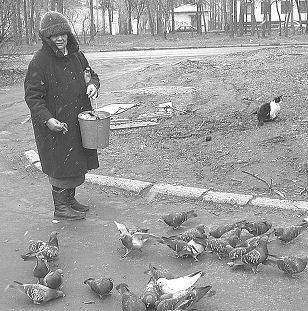 ... Here is Mishkin's school desk. On the side is inscribed the inscription: “I will not give up! I will overcome science! ” A long time ago she was made by some stubborn naughty boy, who apparently wasn’t very much given school subjects.


Misha sat at this desk for seven long years. He learned to write, count, hid cribs in it and slowly folded paper airplanes from teachers.
And now the desk was pushed far to the side and a metal bed was put in its place. On it lies a wounded soldier. Because there is a war, and a hospital is now open at the Mishina school.

Very close to their village Zhernovnoe Dolgorukovskogo area fascists got close. Fights rattle already near Dolgorukovo, and every day wounded are brought to the hospital-school. Mom told Misha that many fighters need urgent operations, and there is a desperate lack of medicines. I heard Misha history about a soldier who was almost taken away from both anesthesia without both hands, and he didn’t even shout. Lost consciousness from pain.

About the anesthesia now the boy knew a lot. He was well aware of the words "chloroethyl" (today this remedy is used only as short-term pain relief of the skin), "ether", 2 and chloroform "(the last two drugs were not enough often). the blood circulated freely through the body. And at such moments the boy presented himself as a doctor. “Sick, be a man, hold on!” - he would have told the wounded man that he had a scalpel in his hands. gay e songs while removed from the body of enemy bullets.

Misha loved to sing, and his eight-year-old sister Masha - too. But the guys loved them even more when people smiled. Therefore, having learned that the hospital did not have enough medicine, they conferred and decided to cheer up the wounded - to come and sing for them naughty chastooshkas.

So, one day in October 1941, in the ward where nineteen seriously injured were lying, nurse Nina entered (unfortunately I don’t know her last name).
- Comrades! she said loudly. - We have guests! Misha and Masha Bessonovy prepared a concert for you.

The guys entered the ward. Masha walked boldly, smiled, and recalled the words of the folk songs she was preparing to sing. Misha also wanted to smile, but suddenly a bitter lump came to his throat. He saw his desk. She remained the same as before. And even the inscription: “I will not give up! I will overcome the science! ”Was still clearly visible, but now from under the sheets. Now on the desk was a thin man without a leg. Empty leg was tied in a knot.

- Well, hello, ogoltsy! - he said gently. - Start your concert, listen with pleasure!
- I fell in love with a pilot, I thought she was flying! I come to the airport, and he sweeps! - Masha sang loudly well-known ditty.

The fighters smiled, and Misha became a little easier. He pulled out of his pocket old wooden spoons and began to tap his sister in rhythm. Masha started singing about the ugly groom, the bad student Petya ... The soldiers clapped their hands, tried to sing along. And the one-legged fighter, who was sitting on Misha's desk, began to stamp in time with a healthy leg.

After the ditties, Masha started to sing, “Oh, frost, frost!”. The fighters immediately picked up. Especially tried a young guy with bandaged hands. Something strange was in these hands. Misha looked more attentively and suddenly realized that they were shorter than necessary. The guy lacked both brushes. And when he sang, he tried to hide his hands behind his back, embarrassing them, such as bandaged and short.

... Through the discordant voices suddenly they heard sobs. In the corner of the chamber lay a thin, gray-haired man with a bandaged shoulder. Tears streamed down his face, his hands were clenched into fists.

The song broke off.

- What are you, mate? - asked the man's neighbor in the bed, the same guy. And awkwardly stroked his shoulder with a bandaged short arm.
“I remembered my wife ...” he answered grudgingly. - She stayed in Kiev, did not evacuate, worked as a doctor, waited, when their hospital was evacuated. And there are no letters from her so far. Is it alive?

A heavy silence, like a thick fog, enveloped the chamber. Every soldier probably thought about his abandoned family. And Masha, seeing how a gray-haired fighter was crying, suddenly approached him, leaned over and, pointing her finger in the chest, cried out:
- Oh, uncle! What is this about you ?!

He bent his head, trying to look at his shirt. And Masha deftly grabbed his nose and laughed. Old as the world, children's joke, but it helped in such a difficult moment. At first, the wounded man was taken aback, and then he smiled, hugged the girl with his good hand, pulled her close and kissed her.

And the rest of the soldiers also began to smile. Seeing this, Misha ran up to the one-legged fighter who was sitting on his desk, and, threateningly with eyebrows, said:
- Uncle soldier! Why are you hooligan? They wrote on the desk! Ah-ah-ah, not good! Big, and spoil school property!

He blinked in surprise. Then Misha pushed back the sheet and pointed to the inscription “I won’t give up! I will overcome science! ”

- Well, confess! - he did not retreat. - Why spoiled the desk? On what subject did the twos grab?

And, unable to stand, laughed the first ...

... For almost two months, until the winter, Masha and Misha Bessonov went to the hospital every day. They sang songs to the soldiers, read poems, trying to cheer them up. The fighters fell in love with the kids, they always waited for them with impatience and also tried something to please. One soldier gave Masha gingerbread. But the girl did not eat it, but gave the cake to the wounded lieutenant Uncle Seryozha. After all, he, lying in the hospital, often recalled his wife and how delicious she was baking sweet jam pies. Therefore, Masha loved sweet Uncle Shorezha, judged Masha. That gave the gingerbread.

But Uncle Seryozha also did not eat treats. Slowly from the guys, he crumbled the gingerbread and every day he poured a few crumbs on the windowsill. Soon pigeons began to fly to the window of the ward for the seriously wounded - for a treat. Uncle Sergei especially liked one, gray, and he began to slowly tame the bird.

On the day when Uncle Sergei was discharged from the hospital, he did not go directly to the front, but waited for the guys to come. On his hand he was sitting quite hand-gray dove.

“This is your memory,” Uncle Seryozha said, drawing the bird to Masha. - Your heart is good, and your little brother has one too.

In winter, 1941, when the Germans occupied Dolgorukovo, Misha and Masha and their mother were evacuated to Lipetsk. And when they returned to Zhernovnoe again, they waited a long time for a letter from Uncle Seryozha, to whom they left their address. But they did not wait ...

For many years, Maria Sergeevna Bessonova kept the memory of a winged gift (the pigeon lived with the children, but before the evacuation they released him into the wild). And even becoming an adult, every day I fed pigeons. In memory of the fighter Uncle Seryozha and all the wounded, whom she and her brother used to try to help. For this occupation, I took her picture. It was a few years ago. And recently, Maria Sergeyevna died.

Perhaps, there were almost no hospitals in our country where at least once such Misha and Masha would not come. For example, only in Novosibirsk, by the end of the war, they worked in the schools of 35 hospitals, and schoolchildren often came there with concerts. In the village of Novonikolskoye, Voronezh Region, there was a hospital, where every week a children's choir, specially created for performances before the wounded, came. The village teacher collected children who could sing somehow, learned the most popular songs with them at that time. At first, the children came with concerts in the morning, as the doctors carried out the bulk of the operations at night. But the wounded were asked to postpone the speeches to "after dinner". They set aside for the children all the most delicious and gave them as a reward for concerts.

In the city of Uralsk, there was a boarding school where girls and boys orphaned during the war lived. They prepared performances of children's fairy tales and traveled nearly a hundred kilometers to the hospital to give a concert for the wounded. as many of these already grown up girls and boys later admitted, almost all of them dreamed of seeing their relatives among the fighters ...

In the village of Ivanovsky in the Rylsky District of the Kursk Region, there was a hospital in which one of the nurses "managed" the "cultural program". She collected all the rural children and, in her free time, taught them to read poetry.

Thanks to all of them. And a low bow.