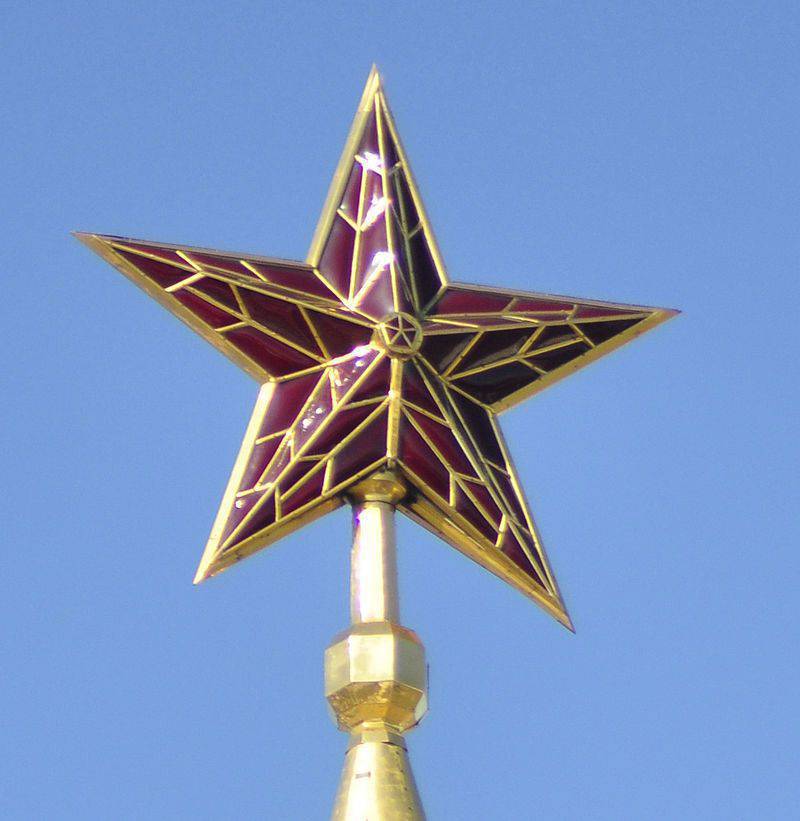 80 years ago, 24 October 1935, the first five-pointed star was installed on the Spasskaya Tower of the Moscow Kremlin. Until 1935, the spiers of the Kremlin towers were decorated with heraldic double-headed eagles. The first double-headed eagle was hoisted on the top of the tent of the Spasskaya Tower in the 17th century 50. Later, the Russian coat of arms was installed on the highest travel towers of the Kremlin - Nikolskaya, Troitskaya, Borovitskaya. In October, 1935, five-pointed stars appeared over the Kremlin instead of the two-headed royal eagles.


The first five-pointed star was installed in 1935, it changed the eagle on the Spasskaya Tower. Then they hoisted the stars on the Nikolskaya, Borovitskaya and Troitskaya towers. Then, when replacing the stars in the 1937 year, the fifth star appeared on the Vodovzvodnaya tower, where before that the state symbols were not located.

For the first time, the double-headed eagle was placed on the high tent of the Spasskaya Tower back in the kingdom of Tsar Alexei Mikhailovich Tishayshy (1645-1676). Previously, the Kremlin towers carried only military function, they did not have tent roofs and upper decorative tiers. Only during the reign of Tsar Mikhail Fedorovich, the Spasskaya Tower was built on to install a clockwork. Under Alexey Mikhailovich, on the top of the tent of the stone superstructure of the Spasskaya Tower appears the coat of arms of the Russian kingdom - the two-headed eagle. Its appearance and description are not preserved.

By the beginning of the XIX century, the eagles were already on Spasskaya, Nikolskaya, Troitskaya and Borovitskaya travel towers. They were changed from time to time because of disrepair, fires, or changes in the image of the state emblem. As a result, by the beginning of the twentieth century, four double-headed eagles were towering over the Moscow Kremlin, which were installed at different times, made by different craftsmen, and differed significantly from each other. The oldest was the eagle on the Trinity tower. It was installed in the 1870 year and consisted of separate parts. Therefore, when mounting it was collected directly on the tent spire. When it was removed in 1935, it had to be disassembled on the spot. The last update of the eagles took place in 1896 year and was timed to the solemn ceremony of the wedding to the realm of the last emperor Nicholas II.

It is clear that in Soviet Russia they immediately wanted to change the main symbols of the state. During the Civil War, this proposal was made by the head of the Soviet government, Vladimir Lenin. However, in the conditions of many high-priority affairs and economic ruin, this wish of the Bolshevik leader was not fulfilled. This problem was returned only to the relatively stable 1930s, when industrialization was in full swing in the country. There were several proposals for replacing the coat of arms with simple flags, like on other towers, with the emblems of the USSR, gilded emblems with a sickle and a hammer. But in the end they decided to install the stars. 23 August 1935 was adopted by the Council of People’s Commissars and the Central Committee of the CPSU (b) to replace the old characters with new ones. Immediately after this, a TASS report was released: “... by November 7 1935 to remove the 4 eagle on the towers of the Kremlin wall and the 2 eagle from the building of the Historical Museum. By the same date it was decided to install five-pointed stars with a sickle and a hammer on the towers of the Kremlin. ”

Sketches were first developed by the artist EE Lancere. However, Joseph Stalin did not like his work. As a result, Lancere was removed from the project and the development of stars was given to the artist F. F. Fedorovsky. The project was approved personally by Stalin.

New stars showed Muscovites in October in the Park of Culture and Rest. Gorky. After dismantling the double-headed eagles, they 23 October were also demonstrated to the citizens in the park. October 24 metal star with a crossed sickle and a hammer was raised to the Spasskaya Tower. The operation was quick and took less than an hour: the beginning of the ascent at 12 hour. 40 min., Installation on a special vane mechanism - in 13 hour. 30 min. October 25 star appeared on the Trinity Tower, and by October 27 stars were hoisted on the Nikolskaya and Borovitskaya towers.

The first stars of the towers of the Moscow Kremlin were made of high-alloyed stainless steel and red copper. The weight of the steel bearing frame, lined with metal sheets and decorated with Ural stones, reached tons. In the middle of each star, Ural gems (rock crystal, amethysts, alexandrites, topazes and aquamarines) laid a sickle and a hammer covered with gold. All stars differed from each other in decoration. Thus, the rays of the Trinity Star were decorated with ears. For Borovitskaya tower produced a double star. The simplest was a star on the Nikolskaya Tower, the rays of which were made of polished metal. They made stars in two Moscow factories and in TsAGI workshops.

Illuminated from below by searchlights, the first stars decorated the Kremlin for about two years. However, under the influence of atmospheric precipitation, both the Ural semi-precious stones and gold leaf, which covered the metal parts, became dull. In addition, the stars were disproportionately large, which was not detected at the design stage. After installing them, it turned out that visually the characters do not completely harmonize with the slender tents of the Kremlin towers. Large stars literally suppressed the architectural ensemble of the Moscow Kremlin.

Therefore, already in 1936, they decided to design new stars. Sketches prepared by the famous artist and decorator, academician F. F. Fedorovsky. He was the one who had the idea to use special ruby ​​glass instead of metal for decorating star rays. Fedorovsky redefined the shape, size and pattern of stars.

In May, 1937 was decided to establish the twentieth anniversary of the Great October Revolution on five Kremlin towers, including the Vodovzvodnaya, ruby ​​stars. And Stalin personally decided to install such a star on the fifth Kremlin tower, Vodovzvodnaya. The industry was given the task of welding ruby ​​glass. State order received the Donbass plant. The problem was that never before in such quantity ruby ​​glass was produced in Russia. In addition, according to the specification, the glass should have a different density, pass the red rays of a certain wavelength, and be resistant to sudden temperature changes.

Special ruby ​​glass, which met the requirements, was invented by N. Kurochkin, who made the first sarcophagus for the mausoleum of V. I. Lenin. For Kremlin stars, 500 square meters of special three-layer ruby ​​glass were welded. For uniform and bright illumination of the entire surface of the star, unique incandescent bulbs with power from 3700 to 5000 watts were made, and to protect the stars from overheating, the specialist made a special ventilation system. Ruby stars on the five towers of the Kremlin lit 2 November 1937 of the year. The star, which in 1935-1937 was located on the Spasskaya Tower of the Moscow Kremlin, was later installed on the steeple of the Northern River Terminal.

The stars of the Moscow Kremlin double glazing: inside - milk glass, outside - ruby. The weight of the stars is very significant - about a ton. The ruby ​​stars on the towers of the Kremlin are of various sizes, since the fortress towers have different heights. This idea was proposed by Fedorovsky. As a result, the stars looked the same from the ground. At the Vodovzvodnoy beam span of three meters, on Borovitskaya - 3,2 meters, on Trinity - 3,5 meters, on Spasskaya and Nikolskaya - 3,75 meters.

The bearing structure of the stars is a spatial frame, which rests at the lower base on the pipe, and the bearings for rotation are located in it. As a result, the stars can rotate as the wind changes. The design can withstand a hurricane. The mechanisms for servicing the Kremlin stars are located inside the towers. Special lifting devices provide an opportunity to periodically perform technical work on cleaning the internal and external surfaces of stars from dust and soot. Mechanisms replace blown bulbs within 30-35 minutes. Control of equipment and mechanisms is concentrated at the central point, where information about the lamp operation mode is automatically supplied.

The ruby ​​stars on the towers of the Kremlin burn day and night. Even during the war they were not turned off, but covered with covers. Overhaul and reconstruction of stars were made in 1945 and 1974. For all history they extinguished only once, when in the Kremlin in 1996, they shot an historical film. These are the stars we see over the Kremlin today. Restoration work began in 2015.