The indigenization of the XXI century: is everything so bad with the Russian language in Belarus?

October 23 2015
339
The problem of the oppression of the Russian-speaking population, which is acute in the Baltic States and in Ukraine, has been pushed into the background in Belarusian cities and villages. The reason is simple: there is no one to do this. While political scientists are singing laudatory odes to the Farther and his social policy programs, the “Belarusian movement” very slowly, but systematically and progressively replaces the great and mighty in the most vulnerable areas. And it seems that the process has been launched seriously and for a long time.


Everything went too far

After the election of 2010 of the year, which ended in a major scuffle of the opposition and law enforcement officers, Lukashenko apparently decided that he could and should play with this public. Several difficult years were not without difficulty experienced, and as soon as there was a softening of sanctions, the head of the Belarusian state with an open shirt went to contacts with the West.

Nevertheless, the Old Man controls the political situation in the country with all 100%: obviously, economically and financially Belarus completely depends on Russia, and therefore it cannot and will not make a sharp breakthrough towards the European Union (there is already an unenviable example just south). The aksakal in the geopolitical space of the CIS has been balancing on the very brink of 20 for years, and so it is, that it even commands respect.

But in terms of the ethnic-linguistic culture, in the context of the friendship of nations, which the Belarusian people have always been famous for, Lukashenko has inadmissibly made it possible for the opposition elements to be done. It is unlikely that he initiated the changes that are now taking place in society - rather, he looked at it as an opportunity to receive political dividends from the USA and Europe, and also split the opposition (which he managed more than once and not even two). In general, I wanted the best for myself, but the real occasion came out.

First out of the ordinary news It became the news that the training of certain subjects in Belarus will be conducted exclusively on the Move. Let us quote the Minister of Education of the Republic of Belarus Mikhail Zhuravkov: “To study the geography and history Belarus, of course, is necessary in the Belarusian language. I think that gradually the children themselves will come to the fact that they want to study half or most of the subjects of secondary school in the Belarusian language. ”

Let us leave aside the question of the richness and historicity of the Belarusian language - be that as it may, in this respect it is much inferior to its Russian brother. So, the study of two or more languages ​​is always commendable, and if a student wants to study in the native move, he can be given every opportunity for this, but why force absolutely Russian-speaking children to learn in a language that they do not understand a little more than completely?

Go ahead. Signs, banners, signs — the streets of Belarusian cities in recent years have been de-Russified “quietly,” without too much hype. And the most amazing thing is that the population is getting used to it and is calm. The exception is commercial advertising - it is obvious that it will be better conveyed to the potential audience in a language that it understands. But she will not be able to compete with state propaganda at her level. 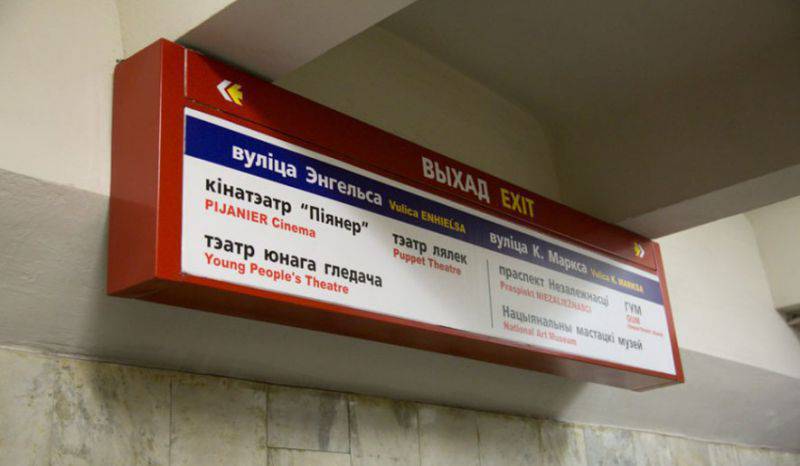 Another ambitious and extravagant project from Belarusisers is an introduction to the use of “lazinki”, still the same language, only when using a Latin font. It is already with enviable frequency used in public signposts. In the Minsk metro you can read the station names in three dialects at once - Belarusian, Belarusian “Latina” and even English (despite the fact that the majority of tourists come not from the West, but from the East). The question is where the main language of the country, which is used by its president, remains open. 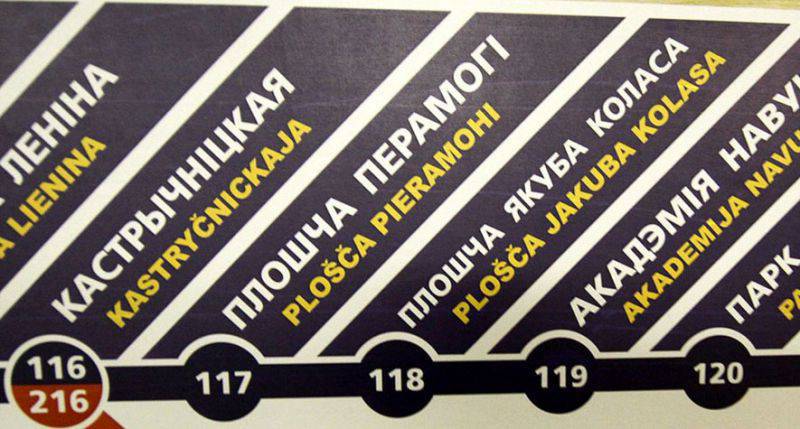 Do you think Belarusian inscriptions are duplicated in English? But no, in English there are no letters with "gachekami" Š, Č and Ŭ. And what is it? And this is the so-called "Latsinka" - the Belarusian language in Latin spelling. The citizens of Belarus gradually, slowly began to teach Latin. When they get used to it, you can enter.
Vyacheslav Kondratyev, http://vikond65.livejournal.com/401140.html.

Attempts to pull the title of “independent rascal” from Poznyak, Statkevich and anyone from the Belarusian opposition to themselves hardly paint Lukashenko and speak about him from the best side. But what is worse, the measures with which he at least does not interfere, lead to the undermining of statehood and the development of soil for a pro-Western coup. Even if he wears an embroidered shirt and speaks only on the move, it still does not add to the Old Man sympathies from the always dissatisfied rogues. It remains only unobtrusively to explain this fact to him ...

Ctrl Enter
Noticed a mistake Highlight text and press. Ctrl + Enter
We are
Belarusian nationalism is a weapon of the West against RussiaLukashenko gave a detailed interview to Russia Today journalists
339 comments
Information
Dear reader, to leave comments on the publication, you must to register.