October 22 2015
34
The week began with the unprecedented activity of the German leaders in the Middle East. On Sunday, Chancellor Angela Merkel visited Istanbul, where she met with Turkish President Recep Tayyip Erdogan and Prime Minister Ahmet Davutoglu. On Monday, the head of the German Foreign Ministry, Frank-Walter Steinmeier, spoke in Riyadh with Saudi King Salman ibn Abdul-Aziz and his colleague Adel Al-Jubeir, the KSA foreign minister. 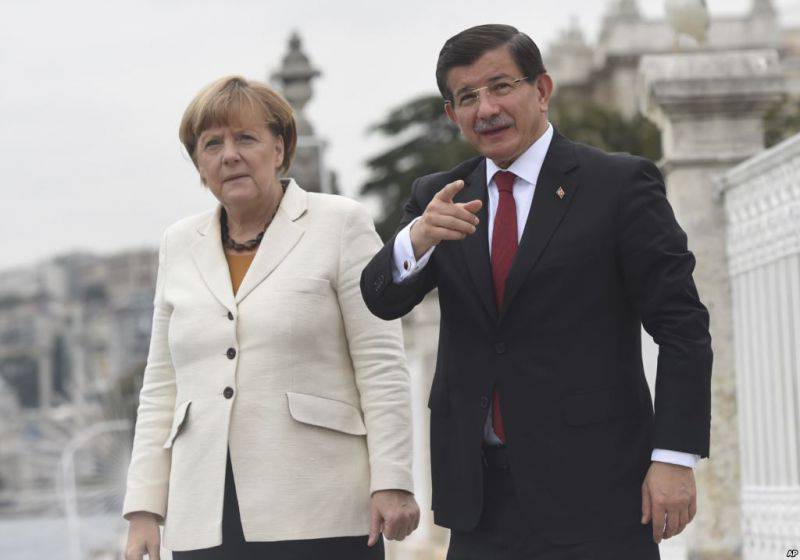 Angela Merkel made a petitioner

Observers assessed both missions as failures. They talk about poor preparedness of visits, even their inopportuneness. They note that the German leaders, who had tried to penetrate the world agenda of the Middle East, found themselves in an extremely weak and somewhat losing position, because they came, above all, by the petitioners for their support in resolving the refugee crisis in Europe.

It seems that everything is correct, but this particular. The main thing here is the unwillingness of German politicians to build relations with Eastern leaders. In such contacts, details play a huge role. At one time, the former British Prime Minister Tony Blair, in a meeting with the Libyan Jamahiriya leader Muammar Gaddafi in March 2004, did not pay attention to the replica of the Libyan leader, which, incidentally, said in English (“You look good, you are still young”), and his posture (right foot imposingly imposing on the left foot to the interlocutor).

Blair called the meeting successful and even breakthrough. The Arab world laughed amicably at the arrogant British Prime Minister. By the standards of the Arabs, Gaddafi expressed his interlocutor the extreme degree of neglect and disrespect.

The case was remembered in comparison with the recent TV picture. The Bundeskanzlerin and the Turkish President posed for her. Recep Erdogan sat with a grim look, casually dropping a hand from the arm of his gilded throne. The President of Turkey didn’t even give a glance to the guest. Angela Merkel sat in the chair offered to her depressed. The world saw a self-confident leader with the sixth largest and most powerful army, whose ambitions extend to the restoration of the once powerful Ottoman empire, and I called in a petitioner who set off under the pressure of mass protests of Europeans (and Germans among them), frightened by the influx of migrants.

Truth be told, Erdogan had no reason to bow his head in front of his visiting guest. And it's not about gender habits (the native wife of the Turkish president publicly usually mince after him, wrapped up in oriental robes). After all, Angela Merkel in November 2012 of the year directly stated that she did not want Turkey’s full membership in the European Union, and negotiations were frozen. (However, over the previous ten years, the parties agreed on only one chapter of the accession agreement.)

Moreover, since the beginning of the Syrian conflict, Germany has established close ties with Iraqi Kurds. German soldiers teach them how to fight, provide other support. And even if these Kurds are not part of the Kurdistan Workers' Party banned in Turkey (Erdogan has always been in counter with her, and now he is fighting at all), their desire to create their own state sharply diverges from the imperial ambitions of the Turkish president. The Turkish authorities were also irritated by the intervention of Merkel in the Turkish Stream gas project. Finally, driven by the desire to get the votes of the Turkish diaspora in Germany, the chancellor sharply criticized Erdogan’s policy of violating human rights.

On the eve of the 100 visit, the representatives of the opposition Turkish intelligentsia appealed to the German Chancellor with an open letter. They called for the sake of short-term domestic political benefit not to close their eyes to the violation of European values ​​in Turkey - freedom of speech and the press.

Angela Merkel during the meetings in Istanbul did not react to this appeal. But Turkey recognized the "safe country of origin", where you can return refugees. She promised money for arranging transit camps for them. She promised to simplify the visa regime, restore talks on Turkey’s accession to the European Union - this year their new chapter should be opened.

On the eve of the parliamentary elections scheduled for November 1, Merkel’s visit played into the hands of the Turkish authorities. They did not give direct promises to the chancellor. The parties only managed to agree on intentions. Concrete results of the meeting in Istanbul did not bring.

Moreover, the visit of the German Chancellor to Turkey showed that Germany, which is applying for a permanent seat on the UN Security Council, is no more than a strong regional country. She learned how to troll the Greeks, Hungarians and other Young Europeans. Germany has no real influence on the processes of world politics. Therefore, the stated for negotiations theme of Syria was never implemented during the visit of Merkel to Istanbul.


But the topic of Syria was actively discussed in Riyadh by German Foreign Minister Frank-Walter Steinmeier. He was also interested in the involvement of the Kingdom of Saudi Arabia in solving the problem of refugees from the Middle East. However, to a greater degree, the head of the German Foreign Ministry wanted to persuade Saudi Arabia and Iran to sit down at the negotiating table to resolve the Syrian crisis.

The stated mission was initially impossible. There are several system errors in it. The first is that although Saudi Arabia and Iran claim regional leadership, they do not have a decisive voice in resolving civil confrontation in Syria. There are more serious players in this field, and Steinmeier should be aware of this.

The second is the unreality of the goal. With the same success, you can offer, say, Barack Obama to join the Labor Party of Korea, and then be surprised that he refused. Exactly this was done by the Minister of Foreign Affairs of Germany after meeting with the King of Saudi Arabia. He acknowledged that the "abyss" that ran between the political positions of Tehran and Riyadh "is now extremely difficult to overcome."

This "abyss" has a long history, in which the word "now" is not entirely appropriate. Observers usually qualify opposition in the Middle East as a conflict between Sunnis and Shiites - representatives of the most popular movements in Islam. But this is only part of the truth. In this region, the planets will spark multilayered contradictions that have a religious, ethnic, territorial, class character, etc.

Here is one of them. Kingdom of Saudi Arabia has a relatively young history. The Saudi state was born only in the eighteenth century, then was absorbed by the Ottoman Empire. More attempts were made to recreate it, but in reality the Saudi kingdom was revived only at the beginning of the last century, which by the standards of the East is no time at all. Nearby were Baghdad, Damascus, Tehran, Isfahan and other pillars of Eastern culture and history.

This is after the Second World War, the Saudis began to rise on oil. Before that - quite a poor Bedouin land. The rise of the kingdom of the Arabs took, reluctantly, like we - "new Russian" in 1990's. They began to consider them Saudi upstarts. On occasion, pull up, as did Muammar Gaddafi. In March, 2009-year, for example, at the summit of the League of Arab States, the Libyan leader criticized and insulted the King of Saudi Arabia Abdullah. The most gentle expression was in that speech “the product of Britain and the ally of the Americans.” Gaddafi considered himself "the imam of the Muslims, the head of the Arab rulers, the king of the kings of Africa."

Do not lag behind the subjects of the eastern rulers. In early September, MK.RU published evidence of 25-year-old citizen of Russia and Syria Michel Mizah. The guy returned from Damascus, where he fought in the ranks of the pro-government armed group "Shabiha". There is a remarkable confession in that interview: “Saudi Arabia is not loved for its wildness, backwardness and barbarism, as well as for uncultured pride caused by the presence of vast oil reserves. None of the Gulf countries loved them before the war because of their obscurantism. In turn, the Syrians consider themselves the heirs of ancient civilizations. ” In Syria, there was even a cafe (in Latakia), at the entrance of which a sign hung: "Saudis and dogs are not served."

This is the Arabs. What to say about the Iranians with their great culture and history? After all, the most important oil-bearing bay of the planet is not called Saudi or Qatari - Persian. This is a historical recognition of Iran (Persia) as the most important regional state.

And in Tehran, they know their value. So it's not just a matter of religious differences. For the right to dominate in the Middle East, Iranians are fighting with the Saudis in the blood. And Syria is only a fragment of this war. There is Iraq, Bahrain, Yemen ...

... As for Syria, it is now at war with international terrorists. This was recognized by famous Muslim theologians, and international politicians began to see clearly. They no longer repeat, like a mantra: "Assad must go!". I hope that there will come an obvious understanding that the roots of the terror covered in the religious banner in the Middle East feed on the Kingdom of Saudi Arabia. German politicians have not yet grasped this and left outside the framework of their Middle Eastern negotiations the support of the gulf monarchies of the terrorist groups operating in Syria.

Ctrl Enter
Noticed a mistake Highlight text and press. Ctrl + Enter
We are
Iran in the Syrian conflict. The confrontation with Saudi Arabia and the interests of the ShiitesIs the prince in Yemen dead or dying of a heart attack? How the Emirates got involved in the war
34 comments
Information
Dear reader, to leave comments on the publication, you must to register.