The "democratic" media entered the capsule competition: whoever counts more than the "dead Russians in Syria" is the cookie

October 21 2015
77
Yesterday’s day showed that the patience of the western "partners" had run out. For three long weeks, overcoming all kinds of urges, they did not publish a single line about the “death of Russian servicemen,” and then burst out. Articles appeared in the "democratic" press that reported that "the first Russians were killed" in Syria - not just Russians, but representatives of "armed formations fighting on Bashar al-Assad." Some of the reports about the "death of Russians" grew in volumes, and it was thought that the moment would come when some "most informed source" would report the death of at least General of the GRU General Staff, but so far "informed sources" from similar messages abstained. However, this does not interfere at all with talking about those materials that have climbed onto strips of the most varied publications and Internet resources that are trying to get ahead of each other in terms of presenting “information” about how Russians are “dying” in Syria.


Perhaps, it’s worth starting with the evening message of the Internet portal TC "Rain", who said that "three Russians were killed in Syria." At the same time, "Rain" refers to the news agency Reuters (he was referred to in this case as all “informed”) with the headquarters in Britain, in which the article by Mariam Karouni was published. At the same time, if we compare two texts (“rater” and “rainy”), we can conclude that either translators with signs of hackers work on “Rain”, or the translation was with an inflated “artistry” level and, most importantly, selectivity.

TV channel "Rain":
It clarifies the agency, the dead Russians fought on the side of the Syrian government forces. As a result of the strike, several people were injured. The source also told the agency that the blow was struck at a position that is on coastal province of Latakia.

However, we pay attention not to this, but to the word “source”. About him on the "Rain" states that he is "governmental". Like, information about the "death of Russians" correspondent Rider I gave someone from the cabinet of Syria, that is, from the approximate Bashar al-Assad, and therefore "must be trusted."

Opening the material Reuters and when translating we see that the source with which Ms. Karuni spoke (if, of course, she spoke) is not “governmental”, but “pro-governmental”. As they say, in a famous city, these are two big differences. "Pro-government source" can be called any passer-by who wears a T-shirt with the image of Assad, and who heard something somewhere from another similar "source" (or he had a dream), but this does not mean that he has any attitude to the Syrian Cabinet ...

In general, it is clear that we are already dealing with a lie or a reinterpretation of facts.

But that's not all. Mrs. Karuni from Reuters "Just in case" uses a blurry wording:
If this information is confirmed, the deaths that occurred on Monday night will be the first known deaths of Russians killed in Syria since the start of air strikes by Moscow in support of President Bashar al-Assad (from September September 30).

But the "Rain" no "if confirmed" is not necessary. Here's how the situation seems to be wetted with “raindrops”:
This message was the first about the death of Russians in Syria.

As they say, and don't care that this message may turn out to be nothing more than a fake, as the agency’s correspondent tried to inform Rider. For Rain and its regular readers, is this really important ...

In general, everything is clear again with “Rain”. Now - again to the publication Reuters. In this publication, attention is drawn to the fact that Mariam Karuni still calls the name of a person who tried to confirm "information about the death of 3's Russians in Syria." This man’s name is Rami Abdurahman (aka Abdul Rahman). This man is known for heading the Syrian Observatory for Human Rights. The Observatory! .. And, most notably, this “observatory” is not at all in Syria, but in ... London.

Not so long ago, the Vesti correspondent tried to talk to Mr. Abdurakhman in the British capital, but he, seeing from the window of the house- "office" that representatives of the Russian press were knocking at him, called the police, stating that unknown people were attacking his home ... Talk thoroughly and hearty to the journalists of "Vesti" with the "human rights activist" who has no relation to real human rights activities, and who received a residence permit in Britain a few years ago, did not work out. But then it was possible to find out that exactly one person works at the office of the “Syrian Center”, and this person is Rami Abdurahman himself. At the same time, Abdurahman said that in Syria, "he has several hundred informers." And literally everyone only thinks about how to jingle in London with this Abdurakhman ... 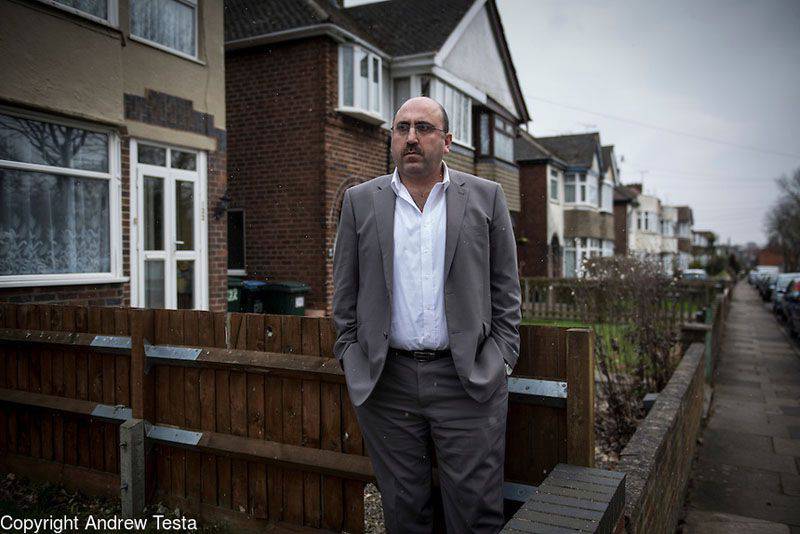 From the message Reuters:
He (Abdurakhman) believes that the Russians were not fighters of the regular army, but were volunteers. A pro-government source familiar with the military situation in Syria said that at least 20 Russians were at a checkpoint in the Nabi Yunis area when a shell was fired from their position.

So, what kind of picture emerges from this publication? The picture is about the following (something from a series of creative unrestrained avant-garde):
Correspondent Reutersworking like in Syria, learns that in the same Syria, the militants fired at a roadblock. Further, for some reason, she calls up to Mr. Abdurakhman, who is at a distance of at least 3,5 thousand kilometers (if in a straight line) from Syria, and clarifies with him “information”. Abdurakhman from London "sees perfectly" that there are Russians at the checkpoint under Nabi Yunis (his "observatory" knows everything ...), but at the same time Abdurakhman "did not see" the military personnel, but he saw volunteers. After that, the most truthful TV channel “Rain” comes into play.

Screen of the "Rain" page: 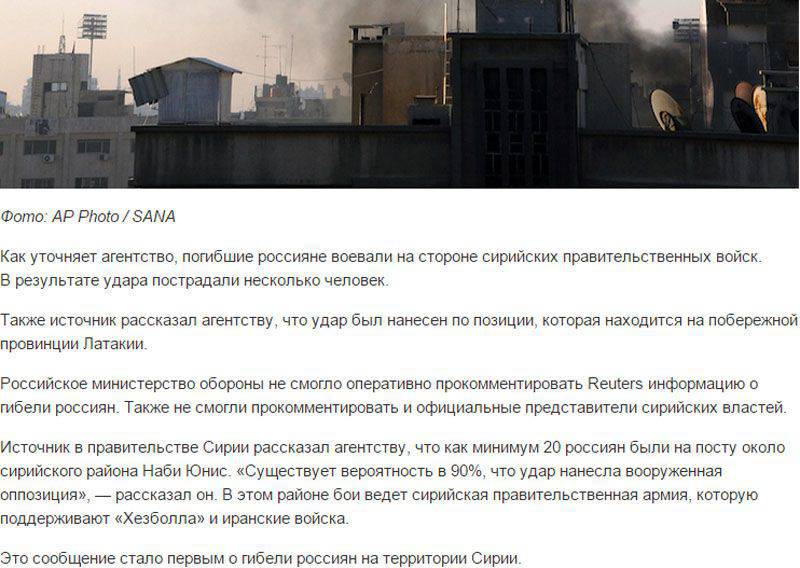 He, passing “not so important” data on the real source of information to Reuters, gives out a material stating that the source is “governmental”, immediately adding the following:
(...) The official representatives of the Syrian authorities could not comment either.

That is, the source is “governmental”, but the government could not comment ... Bravissimo, maestro! ..

Meanwhile, in the Russian embassy in Syria they called all these publications similar to stuffing, adding that the diplomatic mission does not have any information about the death of the "three Russians" in Syria.

But the West, in principle, it does not matter whether the Russians died in Syria or not. Now the same US Department of State has the opportunity to refer to Reuterswho himself referred do not understand anyone. Any John Kirby will come out to the podium and declare that the information is “confirmed by reliable sources from among Syrian human rights activists”. Well, let these “human rights activists” live in London and are as far from human rights activities in Syria as they are from Syria itself ...

But the publication of Mariam Karuni from Rider - this is, after all, childish babble in comparison with the ukrossensations that fell after this material.

So, UNN released a real media "bomb":
The bodies of 26 dead servicemen from the 810 separate brigade of the Marine Corps of the Black Sea Coastal Troops were delivered from Syria to Sevastopol fleet.

The question immediately arises: who is the source of these? Is it really Abdurahman again? But no ... We take it higher! .. It turns out that the “information” was collected by the UNN personnel from the Main Intelligence Directorate of the Ministry of Defense of Ukraine!

Figase awareness ... The State Intelligence of Ukraine’s Defense Ministry is still unable to establish the exact number of Ukrainian servicemen killed in the Donbass, and here, you know, truly furious awareness of the Syrian events and the "Russian Marines" who died in Syria ... New newspaper "with" unknown graves in unknown cemeteries "...

But to what level of information content would the matter have reached if the London Observator Abdurakhman had been admitted to the head control department of ukrorazvedka? But there is still time ..