October 20 2015
25
The American president "canceled" his next election promise. US troops from Afghanistan will not be withdrawn. Mr. Obama said: “I do not support the idea of ​​an endless war” and immediately announced that the withdrawal of troops from Afghanistan is being postponed. The official explanation for the decision: the White House’s intention to "support Afghanistan and the people of this country." The decision of the "invader" Obama immediately "condemned" the Taliban. Some experts believe that Washington leaves the contingent in Afghanistan for the sake of maintaining influence on Russia and China. 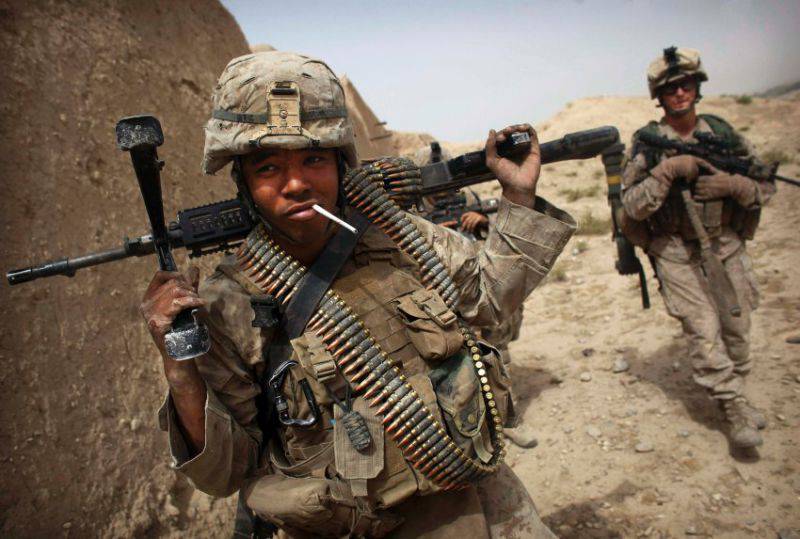 According to Mr. Obama’s new decision, the US contingent in Afghanistan in 2016 will remain at the level of 9800 people, and by 2017 will decrease to 5500 people. Previously it was assumed that by the beginning of 2017, the order of 1000 US troops would remain in Afghanistan, remind "Vedomosti".

Details about B.H. Obama’s statement and his “close friends” appeared on the website. "Voices of America".

“Barack Obama, who came to the White House on a wave of promises to end the wars in Iraq and Afghanistan, the announcement that the withdrawal of troops from Afghanistan was postponed was not easy,” writes Aru Pande. And Mr. President is quoted as saying: "I do not support the idea of ​​an endless war ... I have repeatedly opposed interfering in endless military conflicts that do not threaten the interests of our national security."

The correspondent recalls that Obama, in the presence of Secretary of Defense Ashe Carter, Vice President Joe Biden and Chairman of the Joint Chiefs of Staff Joseph Dunford, announced that for most of 2016, the number of US troops in Afghanistan will remain unchanged. Only in January 2017, this number will be reduced to 5500 people.

What is the reason for such a difficult decision for Obama? “I think what happened in Kunduz teaches us a lot. This is a situation where Afghan troops managed to recapture Kunduz captured by the Taliban only with the help of the US military, ”said Michael Kügelman, an expert on South Asia from Woodrow Wilson Center. “I think it would hardly have ended well without the help of the Americans.”

And here are the words of Obama himself: “Although the military mission is completed, we intend to continue to support Afghanistan and the people of this country. As long as I am the commander-in-chief, I will not allow Afghanistan to remain the refuge of terrorists who can once again attack our country. ”

According to officials, the decision to slow down the withdrawal of troops was made after discussions on this issue between the White House, the leadership of the Ministry of Defense, the command of the troops in Afghanistan and the Afghan authorities. The discussion went on for several months.

The Taliban leadership criticized the idea of ​​the White House. According to the leaders of the group, the "occupation" of Afghanistan should be stopped. The Taliban condemned the plans of the US and its NATO partners to continue the military mission in Afghanistan after the 2016 year.

Newsru.com recalls that just one day before B. H. Obama’s statement, NATO Chief Jens Stoltenberg said that the responsibility for the security of Afghanistan completely passes to 350 to thousands of Afghan soldiers and police.

“But NATO allies, along with many partner countries, will continue to prepare, advise and help them. This is what NATO and Afghan leaders agreed upon. This was made possible by the courage and ability of the Afghan national security forces and the dedication of the international forces that helped train them in recent years, ”Mr. Stoltenberg added.

The agency also recalls that at the beginning of this year, Washington announced a reduction in Pentagon’s military operations. In particular, this decision was a consequence of the continued withdrawal of US troops from Afghanistan. By the end of 2015, about 5,5 thousand troops will remain in Afghanistan, Reuters reported in January.

After the US President’s speech, the NATO Secretary General had to make an urgent statement.

Rosbalt notes that Jens Stoltenberg approved the decision of Barack Obama to maintain the presence of armed forces in Afghanistan after the 2016 year. According to the main person in NATO, this will ensure a stable presence of the alliance and its allies in the country.

“I welcome the announcement made by President Obama that the US will maintain its military presence in Afghanistan at the current level in the 2016 year and leave a substantial contingent there after the 2016 year,” the agency quoted the head of the alliance.

Such a quick reversal of the decision to the opposite (it seems, not even agreed with NATO) did not surprise Russian experts and analysts.

Colonel Anatoly Tsyganok, head of the Center for Military Forecasting, thinks that the Americans are postponing the withdrawal of troops because they could not train the Afghan army. When Soviet troops were in Afghanistan, 30% of Afghan soldiers switched to the side of the Mujahideen; in the current Afghan army, 50% of the military leave for the Taliban.

“Let me remind you, if during the day Soviet troops could control 15% of the territory of Afghanistan and 10% at night, the Americans have even less: they control 8% during the day and 5% at night,” Roma told the newspaper "Sight".

The expert recalled that the Taliban has intensified in recent years. To provide financial support, the grouping increases the flow of drugs from the country.

According to Gypsy, the new dates for the withdrawal of the American contingent are unlikely to be met, because “Afghanistan is an excellent base from which to ideally control Russia and China,” and therefore in the coming years “the Americans will remain there under any pretext.” In addition, there are at least three airfields in the country fully equipped with American communications.

The expert is convinced that Afghanistan does not pose a threat to US national security. The matter is different: “The Americans entered there to bring a“ democratic order ”there. During this time, the production of opium poppy has increased tenfold. The only threat to security for the United States is that they are deprived of Afghanistan as a structure that thrusts into both China and Russia. ”

Associate Professor of Political Science and Sociology at the Plekhanov Russian University of Economics, Alexander Perendzhiev, an expert at the Association of Military Political Scientists, believes that Washington is acting by virtue of pragmatics dictated by members of the ruling elite: “The United States is afraid of losing influence in Afghanistan. They seriously fear that this vacuum will be filled. Russia has a good alliance in this region with India and Iran, which also seek to influence the situation in Afghanistan. It is clear that this triangle is not yet anti-American, but no longer American. ”

In addition, after the start of Moscow’s operations in Syria, the United States almost ended up on the margins of the fight against international terrorism. If the Americans leave Afghanistan, their image of a fighter against terrorists will suffer greatly: “Once the United States spun the image of its country as the vanguard of the fight against international terrorism. If we now withdraw troops from Afghanistan, then all anti-terrorism projects will fall apart. The fight against terrorism is also an economic project. It is clear that representatives of the ruling circles are simply not able to refuse such a project. Everything taken together leads to the decision voiced by Obama. ”

Thus, we add in conclusion, and here the “hand of Moscow” is seen. More precisely, the influence of her recent actions in international politics. Obama made his difficult decision not so much because the training of the Afghan forces by the US military was ineffective and weak, but because of the success of Russia in Syria. The US establishment, and at the same time the Pentagon, urgently need to lacquer the image of their homeland, worn out since the days of the Cold War. Another reason for Obama’s violation of election promises could have been the White House’s desire to retain influence in the region from which, as experts say, “ideally control Russia and China.”

Observed and commented on Oleg Chuvakin
- especially for topwar.ru
Ctrl Enter
Noticed a mistake Highlight text and press. Ctrl + Enter
We are
Pre-election poster artResults of the week. “Yes, everything is so. Everything! They saw, condemned, waved, potryndel, smoked - and that's all. And everything is so ... "
25 comments
Information
Dear reader, to leave comments on the publication, you must to register.