October 15 2015
106
In Homer's Iliad, two very important vehicles are constantly mentioned. These are ships and chariots. Ships perform an exclusively transport function. No naval battles with their participation does not occur. The army of Achaeans precisely on the ships reaches the shores of the Troas. Moreover, these ships themselves are small in size, which is proved by the fact that they are standing on the shore, backed by logs. These ships are described by Homer as black-necked, that is, having a tarred hull. In the middle of the vessel there is one mast, which has one straight sail and, moreover, it is also set in motion by oars. Rowing is not slaves, but the crew members themselves, and they are also warriors. 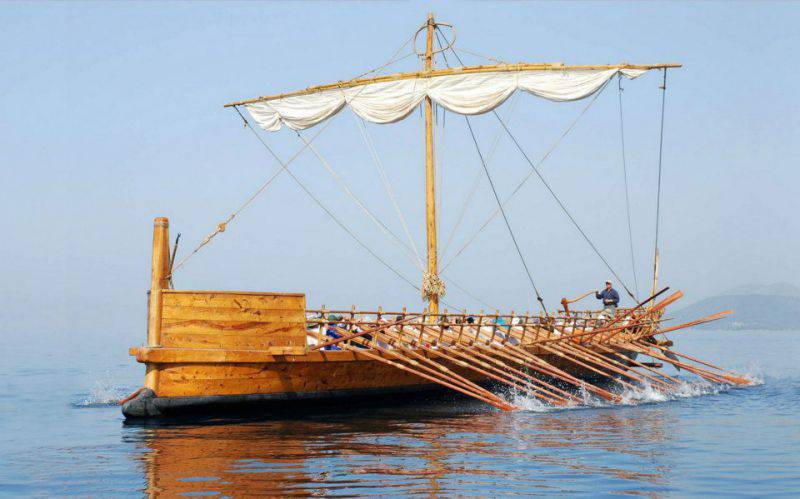 As is known, there is a fresco depicting a ship of the Minoan era. True, this time is “long” before the Trojan War, but technology then developed slowly. The example of Tour Heyerdahl was also contagious here, so here, four years before the Olympic Games in Athens, the Maritime Museum of Crete suggested creating a copy of the Minoan ship and carrying the torch with the Olympic flame on it. He also organized the financing and, in fact, the construction of the ship. The Greek Ministry of Culture also supported the initiative, the scientific part of the project was decided to be developed by specialists of the local research institute NAUDOMO, which means “Institute of Ancient Shipbuilding Research and Technology”, and work began. A team of enthusiasts headed by Vice-Admiral Apostolos Curtis, who analyzed all the available information about the courts of the XV century BC, also gathered there. er It includes not only specialists in the field of naval stories, but also literature, geography, computer technology, modellers and experienced reenactors.

They decided to call the vessel “Minoa” and build it on Crete at the old Venetian shipyard. It is believed that the death of the Minoan civilization was the result of a catastrophic volcanic eruption near the modern island of Santorini: all of Crete was covered with ashes, a giant wave formed after the explosion of the volcano, reached the shores of neighboring Crete and washed away both the city and the village, and it also destroyed the legendary Minoan fleet . Rescued Minoans could not recover from the consequences of this cataclysm. Well, and then, at the beginning of Crete, and then on other islands, scientists found traces of a unique Minoan civilization. As for the island of Santorini, here archaeologists have found many beautiful colored wall paintings, which also included “sea scenes”.

These murals were processed on the computer with which the computer models of the Minoan epochs were created. As a material for the construction of affordable Minoans, chose a cypress that has the hardest and resinous wood. All technological processes and stages of construction of the Minoan ship tried to pre-study on its computer ZD-model. At the same time, according to calculations, the ship’s hull had to be shaped into a drop so that it experienced the least resistance to wind and waves. The length of the unirems, and that is how the Greeks called such ships, which had only one row of oars, without a deck, with straight sails and a crew of rowers from the 22, was to be 17 m, and its width was only 4 m.

To begin with, a group of experienced modellers from the Maritime Museum of Crete produced a smaller copy of the future ship on a scale of 1: 5 and also from cypresses, only smaller. And then the team, armed with double-edged axes, saws, hand drills and other tools - copies of archaeological finds, began to manufacture the vessel. 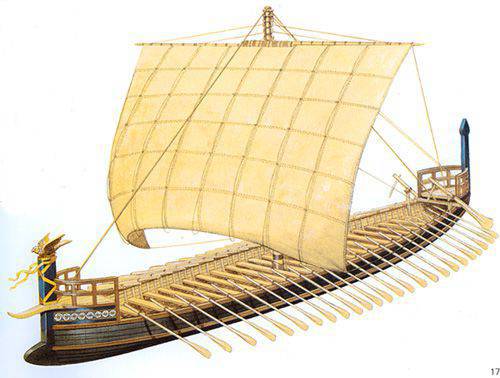 Its keel was made of a cypress trunk of 22 length, m, with a bent up stem and a stern stem. The hull itself was “sewed” from boards laid on the sides of the keel and tied with ropes. Only after this, frames were placed inside the casing, cut from whole cypress trees, bent with the help of collars and ropes as well as the keel. The casing was waterproofed with a mixture of resin and grease. In addition, the casing was covered with several layers of well-tarred fabric, and after a year the works on the ship were completed. 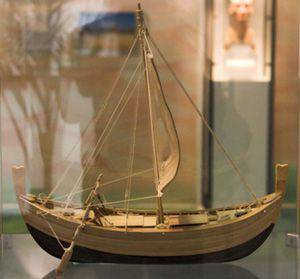 The model of a bronze age trading ship (around 1150 BC), made on the basis of a “ship from Bodrum” raised from the bottom of the sea.

1 December 2003, he came out of the dock, he was given a name, consecrated and raised the national Greek flag and pennants. It turned out that such a design of the vessel allowed him to "breathe" on the waves, and the upturned and sloping stem allowed to approach the gentle shores, where it could be easily pulled out of the water. The anchor was a stone with three holes for tying the rope and two horns of the stakes. In the very center, there were placed narrow transverse benches for rowers and an oak mast with a wing for a sail made of thick wool fabric. The Minoa was supposed to sail in the same way as the Minoan ships sailed: from one island to another, without leaving a great distance from the coast, as the ancient navigators did. It was necessary to spend the night or wait out bad weather in the ports along the way. The crew of the ship was made up of strong young people 24, sharing equally to row one by one. The speed at the rowing course was the 2,4 knot, and at the oars and with a raised sail - the 3,2 knot.

The team was first trained to row, after which 29 on May 2004, this replica set sail, and on June 24 arrived in the port of Piraeus, where other replicas of ancient Greek ships also gathered and where they all took part in the Olympic cultural program. 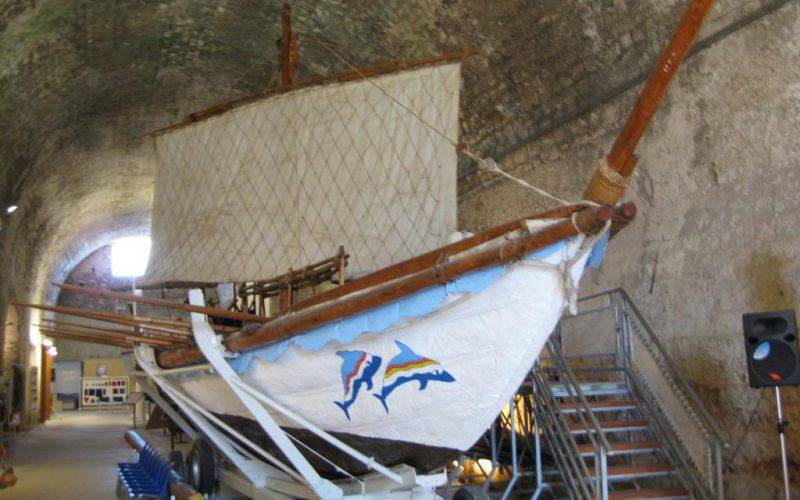 "Minoa" in the museum in Chania.

Well, after the Olympics, he was exhibited in the same Venetian dock of the city of Chania, in the Museum of the Minoan ship, and a branch of the Maritime Museum of Crete, where the Minoa is still today.

Then a replica of the later and larger Argo was built, which, in general, also confirmed the expectations of its creators. That is, this ship also had a good seaworthiness and went well both at the oars and under the sail. Interestingly, according to legend, the crew of the Argo coincided with the number of people who could fit and work on this ship. So, reading Homer, and knowing this indicator, you can try to at least roughly calculate the number of Greeks who sailed to Troas.

Well, they obviously brought the chariots with them, like horses, then collected them and ... gave them to their leaders, who rode on them onto the battlefield, laden with bronze armor. So they saved forces, and besides, they had a supply of spears for throwing and arrows for bows. Fighting chariots, similar to those that were played between the Hittites and the Egyptians had no place here. There were very few Greeks, Achaeans and chariots, and horses, to act in isolation from the main forces of his troops. 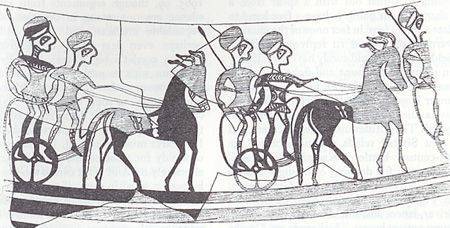 Warriors on a chariot with darts in their hands. The image on the vessel of Tiryns.

As for their device, outwardly, they are not much different from the Egyptian. Apparently, this is such a “trend” at that time. Two wheels with birch rims (why there is no birch, but that is exactly birch), a light fence at belt level, a drawbar for two horses and a harness that allowed them to harness them into this chariot - that's all. 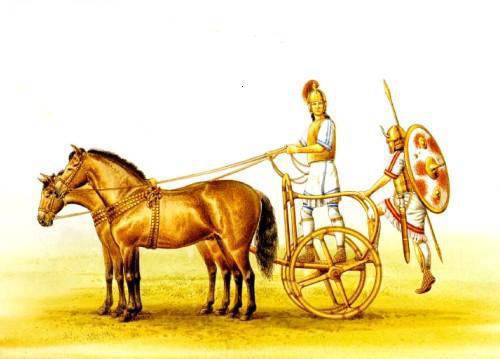 True, not a single Mycenaean chariot has reached us (unlike the Egyptian ones), but there are plenty of drawings, so that it most likely is. 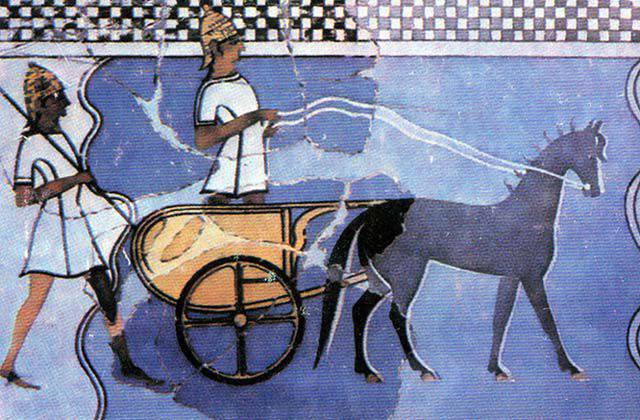 Charioteer and warrior wearing boar’s canine helmets, reconstruction of a 13th-century fresco from Pylos. BC.