Ukraine is said to have to put up and live with Putin ("Bloomberg", USA) 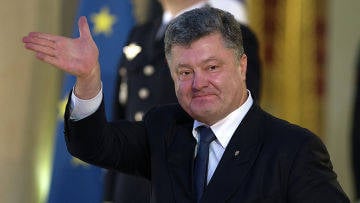 Ukrainian President Petro Poroshenko can not understand that the West supports him on certain conditions. And now the leaders of France and Germany told him about it quite definitely and concretely: from that moment the responsibility for the implementation of the cease-fire agreement in the east of Ukraine rests entirely with Poroshenko, and not with Russian President Vladimir Putin.


Going to Paris to negotiate with French President Francois Hollande, German Chancellor Angela Merkel and Putin, Poroshenko was belligerent. He had just delivered an energetic speech at the United Nations, which was entirely devoted to the devastating raid of Russia on his country. His interior minister, Arsen Avakov, boasted that the Ukrainian National Guard “finally” got American sniper rifles and anti-tank grenades.

Another war of Ukraine

French diplomat Pierre Morel, who maintains close contacts with Moscow and pro-Russian rebels in eastern Ukraine, prepared a plan for the Paris meeting, which four leaders were to approve. In accordance with the proposal by Morel, Ukraine should adopt a special law, which sets out the rules for holding local elections in the regions of Ukraine held by the rebels. It was such a clever way to defuse a time bomb laid down under the February Minsk agreement on a cease-fire. Then Russia and its proxies from the east of Ukraine agreed to hold elections under Ukrainian laws by the end of the year, but they were clearly not ready to hold them in accordance with the current legislation, which did not distinguish between the rebel regions of Ukraine and all the rest. They threatened to hold their own elections in mid-October, which could have caused the resumption of war.

However, Poroshenko brushed aside the proposal of the French diplomat, calling it "Mr. Morel's personal opinion." He went to Paris to demand that Russia observe the Minsk ceasefire agreement, cancel the so-called “fictitious elections” and return to the eastern border’s control of Ukraine by the end of the year.

He underestimated the firm intention of France and Germany to remove from the road the Ukrainian problem that was confused under their feet, making it the most effective way. After five-hour negotiations in the Elysee Palace, the Morel plan was imposed on Ukraine in a form that is more beneficial to Putin. First, Ukraine must develop a special law on elections in cooperation with Moscow and with the separatists. Then she will have to accept him and amnesty separatist leaders so that they can run for local legislative bodies. Elections must be held in the 80-day period after the adoption of the law. Then, if international observers declare them acceptable, Ukraine should regain control of the border with Russia. After the talks, Hollande told reporters that this year is unlikely to happen, because a draft law must be drafted and thoroughly prepared for the elections.

This is Poroshenko's slap. From a political point of view, it is almost impossible for him to push a draft law on elections approved by Moscow through parliament. Poroshenko had difficulty making even a modest amendment to the constitution, which gives a special status to the rebel-controlled regions. When the voting took place, riots broke out at the parliament building and the police suffered losses. An attempt to convince Rada to accept Moscow’s favorable election rules could lead to a split in the Ukrainian ruling coalition and even to extraordinary elections, which would result in a composition of parliament that would be less favorable to Poroshenko.

“Paris once again confirmed that in protecting the national interests of Ukraine, Ukrainians have no allies but themselves,” complained bitterly on the Liga website. net commentator Peter Shuklinov. - Berlin and Paris decided to play the role of arbitrators. Neither want to take decisive action to end the war in the center of Europe. ”

Putin has not only received a delay in the implementation of the Minsk agreements. Now he will be happy to watch Poroshenko wriggle and writhe, trying to soften the Morel plan - or not trying very hard to get the approval of the electoral law. In any case, the failure of these efforts will give Putin a more or less permanent frozen conflict that will divert Ukrainian resources and destabilize the Poroshenko government. And if the ball remains on the side of Ukraine, economic sanctions against Russia can also be lifted - after all, Putin did so last month to make the situation in the war zone calm.

At the same time, Poroshenko will have problems in relations with European leaders, who will be watching his intentions with even greater suspicion.

From the point of view of Merkel and Hollande, Poroshenko should be interested in reincorporating the rebel-controlled areas into Ukraine. This means that there will be a serious struggle in the elections, and in the event of an almost certain defeat, he will have to work with the winners. It is European-style; but attempts to secure external support for the defeat of the separatists are not European-style, especially now, when Europe is full of its own problems.

Poroshenko can count on significant support only if he is willing and determined to perform difficult actions that bring Ukraine closer to Western models of government. This requires the attainment of difficult political compromises and the implementation of painful reforms. So far, the Ukrainian president does not show any special results on any of these fronts.

His country is still hopelessly corrupt and in the grip of an internecine struggle between oligarchic clans, although the Ukrainian government has already created five new anti-corruption bodies. In the absence of true deregulation and tax liberalization, economic growth will continue to be unattainable. The International Monetary Fund has just lowered forecasts for a decline in Ukraine from June nine to 11 percent. The Ukrainian government is losing its war against mismanagement, over-regulation and embezzlement.

That is exactly what Putin needs. Making a bet on elections in the east of Ukraine (if they take place), he is not counting on field commanders, but on the local oligarchs who ruled this region before the “revolution of dignity” 2014 of the year. Through them, he hopes to exert an economic and political influence on Kiev. And he has nowhere to hurry: time is on Putin’s side, not Poroshenko’s.

Ctrl Enter
Noticed a mistake Highlight text and press. Ctrl + Enter
We are
A great interview with Sergey Lavrov: about Ukraine, Obama and IranWhat you didn't want to know about England
41 comment
Information
Dear reader, to leave comments on the publication, you must to register.