Dreams of the past: the Third Reich and Poland against the USSR 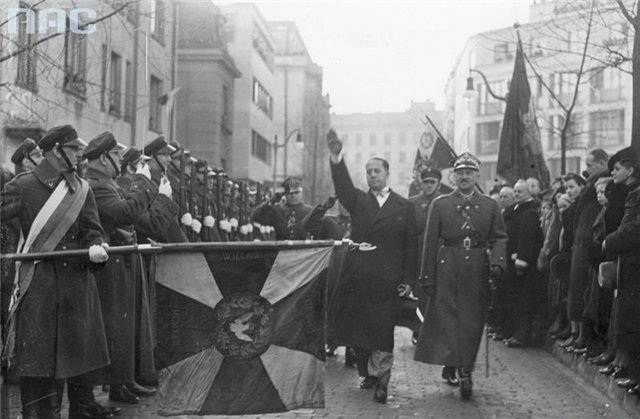 In Poland, both are possible. There, for example, works of Vladislav Gisbert-Studnitsky and Adolf Bohensky, famous Polish authors of the interwar period, who welcomed the possible union of Warsaw and Hitler's Germany, are popularized.

Gisbert-Studnitsky was distinguished by his especially shrill Germanicism. In the 1934 year, that is, a year after the Nazis seized power, when arrests and executions took place all over Germany, he outlined in his book The Political System of Europe and Poland his views on the formation of the Polish-German alliance for joint control of Europe: "Poland and Germany, - wrote Gisbert-Studnitsky, - can become the basis of a huge Central European block, which will include Austria, Hungary, the Czech Republic, Romania, Bulgaria, Yugoslavia, Greece, Turkey and the Baltic countries ... It was not by chance that Hitler, whose main task was the liberation of Herman and from under the French government ... I began a rapprochement with Poland. "

Gisbert-Studnitsky considered the traditional orientation of Poland to Paris disastrous, because in his eyes it was equivalent to the encirclement of the Reich by France and the Soviet Union. Instead, he proposed to maximally facilitate Berlin access to East Prussia through the territory of Poland (the transport corridor Berlin-Warsaw-Konigsberg). Under Hitler, Prussia turned into a synonym for German militarism, but in the existence of this nest of international robbery at the Polish borders, Gisbert-Studnitsky saw only advantages. Impressed him and anti-Semitic theories of the Nazis.

Even when Germany occupied Poland, Gisbert-Studnitsky did not stop broadcasting about the need for a joint campaign against the USSR. The last note to Himmler on this topic was written by him 12 March 1945 of the year.

In 1948, the city of Gisbert-Studnitsky was going to act as a defense witness at the trial of Field Marshal Erich von Manstein. After the war, he wrote a book of memoirs “Why did I not become Polish Quisling?” (Vidkun Quisling - a Norwegian collaborationist who was shot by 1945 court sentence). In German translation, the book was published in 1951 year with the subtitle "The struggle for the Polish-German rapprochement" and under a different name - "Incorrect roads of Poland." The publisher Mechislav Grydzevsky insisted on renaming: he did not want to shock the reader with the revelations of the failed Polish Quisling.

Adolf Bohensky also reflected on the union of Warsaw and Berlin. In his understanding, the Third Reich was a ramming, relying on which Poland could achieve a change in the borders in Central and Eastern Europe, including through the military defeat and dismemberment of the USSR. He estimated the actions of Hitler as defensive, undertaken to ensure security at the eastern borders of the Reich. Bohensky, by the way, did not rule out the possibility of the emergence of the Polish-German-Galician alliance with the subsequent offensive of the forces of this alliance on Kiev and Moscow. In the interests of the implementation of this plan, he called for a dialogue between Poland and Ukrainian nationalists with the assistance of the Nazis.

In 1951, a censored ban was imposed on the works of Gisbert-Studnitsky, and his books were removed from libraries. Trudy A. Bohensky, too, not reprinted. But in modern ("post-communist") Poland, the ideas of Gisbert-Studnitsky and Bohensky are reinterpreted as an example of the "alternative" Polish geopolitical thought of the interwar period.

And these ideas have their admirers among the Polish educated class. In 2012, a professor at the University of Warsaw, Pavel Vechorkevich, lamented that Poland had not entered into an alliance with Hitler: “If in December 1941 the Germans did not have 4-5 divisions near Moscow, and 100-200 tanksthen the prepared Polish army could produce 60 such divisions and a thousand and a half tanks. It was a factor that would resolve the issue of war in the east. ”

The same Vechorkevich believes that Poland, as an ally of Hitler, would have had the opportunity to rule Ukraine, Belarus and part of Russia. However, Jozef Beck, who was Polish Foreign Minister in 1939, ignored, they say, the precepts of Piłsudski, who taught Polish politicians: to survive, Poland should not get involved in the war first and should not fight on its own territory. In an alliance with the Nazis, Professor Vechorkevich is convinced, Poland would have fought far to the east, having entered the war in second place after Germany.

In 2012, the book of the young Polish historian Peter Zykhovich “Ribbentrop - Beck Pact” was published. As the Poles, together with the Third Reich, could have defeated the Soviet Union. ” While Western historians and politicians do not regret black colors, condemning the Soviet Union for signing a non-aggression treaty with Germany in 1939, Zykhovich proposes to reflect on the unrealized possibility of the Ribbentrop-Beck pact. According to him, Warsaw should have given Gdansk to the Germans, agreed to the construction of a motorway from Germany through Polish Pomerania to East Prussia and send its divisions to 40 to help the Nazis on the Eastern Front. This, says Zykhovich, would have led to the defeat of the Red Army, would have saved Poland from the sixty-year Soviet “occupation” and would have allowed the Rzeczpospolita to be revived within the borders of the 18th century (Zykhovich is sure that the Fuhrer would present the Poles to the Ukraine, Belarus and Lithuania).

It is not enough to say that Poland is partly responsible for the outbreak of the Second World War. The public climate in Poland is so poisoned by dreams of the unfulfilled that the theme of the “lost” union II of the Commonwealth with Hitler's Third Reich periodically pops up in the country as the theme of a public and scientific debate. Do the Poles understand well what it can lead to?

Ctrl Enter
Noticed oshЫbku Highlight text and press. Ctrl + Enter
We are
Diplomats of the People's Commissariat of Defense: on the eve and during the warWorld War II: The Fall of Nazi Germany, photo
Military Reviewin Yandex News
Military Reviewin Google News
11 comments
Information
Dear reader, to leave comments on the publication, you must to register.