October 8 2015
8
There are strange coincidences. History, which will be discussed, I was told in the school of the village of Terbuny. A few years later, I learned that the hero of this story once, albeit very briefly, worked in the Lipetsk school, which I graduated from. 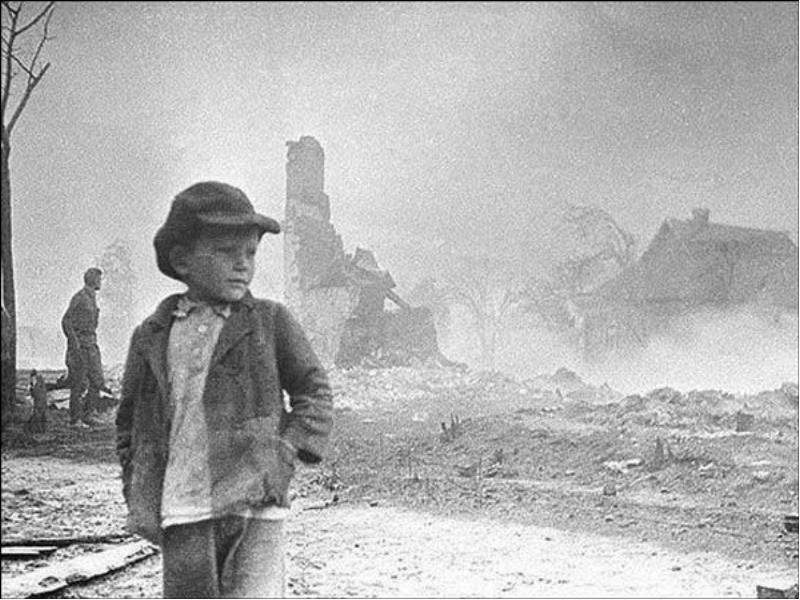 ... It was December 1942 of the year. In Turbuny fascists managed. In the house of the Zhbanovs, where Adik’s mother and two younger sisters lived, the Germans tripled something like a club. Every evening they gathered here, demanded food. Then one began to sing loudly, others went to dance. "Invited" villagers. Women were afraid to refuse such “invitations”, several were already shot for rebelliousness. Therefore, it was hardly getting dark, they came to the Zhbanovs. Many hoped to find out how many Germans had guns, cars, and whether Führer’s men were waiting for reinforcements. Once the neighbor of Zhbanovs was caught by the fascists with a tablet in their hands. He was dragged out of the hut by hair, dragged through the village and beaten with sticks.

Seven-year-old Adik already hated his home, which he had loved so much before. He slowly dragged things into the dugout, which they dug with his mother. There were few things; the fascists had not yet had time to trash them.

An old grandfather balalaika was kept in the attic of the house. Adik knew how to play it a little - mostly ditties. The boy really wanted to take a balalaika from the “club”. It was imagined how the Fritz would find her and strum something of their own. But the balalaika did not know the evil hands. Obstinate, refuse to play - it will burn or trample. The only memory of the grandfather and father who died at the beginning of the war.

Adik could not stand it and, having improved a moment, he climbed into the attic. Found a balalaika, and when I began to descend, his enemies noticed. Surrounded, began to laugh. One German, tall, mustache, took the balalaika and began to say something.
- Do not touch! - shouted the boy. - Give it back!
He grabbed the fascist's hand, hung. He shook his hand, threw Adik. But he, like a tick, clung to it again. The fascist got angry, leaned sharply, hit the boy on the ground. Got a machine gun - either scare or shoot, but his mother threw herself at his feet.
- I will not give Adik! She screamed. - Kill me!
- Adik! Adik! - began to repeat the surprised and satisfied Fritz. - Adolf! Adolf Gitler! Karasho!
The mustache let the boy go, patted him on the shoulder, gave the balalaika.
- Fuhrer! Adolf!
Then he said something to his mother and entered the upper room.
And the frightened, humiliated Adik remained lying on the ground, clutching a balalaika in his hands.
- Mom, am I really Adolph? - only he could utter.
Mother looked away and said nothing. Seven years ago, when she called her son a beautiful foreign name, she did not know that this would be the name of the most hated Russia person.

Now Adik had to appear every night in the “club” - play and sing to the Germans. He did not want to, shouted that it would be better to shoot, but his mother persuaded.
“The folder was killed, son,” she said. - Who will be the man in the house?
And Adik obeyed. He sang ditties, played motanyu. The fascists danced "Russian dances", clapped "Adolf" on the shoulder, sometimes even treated. And the boy was still thinking how to take revenge on his enemies. He tried not to show his hatred. Adolf is so Adolf, just to do something. Therefore, Adik smiled, strummed along the strings, trying to convince the Germans that he was just a seven-year-old boy. And once waited.

Dancing just ended, the feast began. More precisely, they ate and drank Fritz, women just poured vodka into their mugs. One fascist, talking to another, took a sheet of paper and a pencil from his briefcase. He drew something on it, painted, wrote. Both were arguing enthusiastically, now and then poking their fingers into the plan. And then carefully broke the sheet into small pieces, folded them in a pile and left on the table. The one who wrote again reached into the briefcase and pulled out the lighter.
“Now destroy,” Adik realized. “And there must be something important there.”
The boy jumped to Fritz, fell to his knees and stretched out his balalaika.
- Adolf! He shouted. - Adolf Gitler! Fuhrer!
He tried to look away, afraid to cry. Give the only memory of the grandfather and father, whom he so wanted to save! Balalaika was his friend ...
The German was taken aback, then laughed:
- Heil Hitler! Karasho! Pooled!
And Adik kept shoving a balalaika into his hands, showing that he would teach him to play. The Germans, seeing such devotion, raised their circles, shouted something. Adik, too, was poured, and, having improved a minute, he brushed a lighter from the table that could remind you of the plan.

The fascist did not take a balalaika. And Adik, after drinking vodka, felt an extraordinary burst of energy. He gave a whole concert to the Fritz: he sang a few more hours, until he was hoarse. He played for so long that he could not unbend his left numb hand later. The Germans laughed, thinking the boy was drunk. And he understood everything. Alcohol did not muddle the mind, could not make you forget about the enormous misfortune that the monsters brought to our land. Therefore, the boy waited for the enemies to fall asleep, and hid in a balalaika pieces of a torn plan.

Adik gave the information to his mother. She was very happy, because it turned out to be a plan from the village with marked stocks of tools, headquarters. An arrow was even drawn, showing where reinforcements were coming from.
Mom left for the whole day. Returned tired, but cheerful. But how she was able to convey the plan to the partisans, Adik did not recognize. That same evening, my mother came across a mine hidden near their home.

The orphaned family Zhbanov survived the occupation in the dugout. Adik still played and sang with the Germans every day, but he never managed to find out anything again. A few weeks later, in January 1943, Terbuny was released. The children were sent to the village of Pavlovka in the Dobrnsky district, to the Gorky children's home.

When Adik received his passport, he said that this was his full name. No he is not Adolf. So they wrote down: “Adik Matveyevich Zhbanov”.
Adik Matveyevich lived in Lipetsk. He worked as a teacher of labor, then at a metallurgical plant. He had no family. But there was a balalaika, in which he often played to his neighbors.
The photo is not related to Adik Matveyevich. But when I introduce him as a child, it is in a way very similar to the boy in the picture.

We are in Yandex Zen
Father told
Women who defeated fascism
8 comments
Information
Dear reader, to leave comments on the publication, you must to register.