Soviet journalists are against ... Amtorg!

October 9 2015
2
I read the material of Svetlana Denisova about Amtorg and its role in strengthening our country's economy in the 20-30 years of the twentieth century and thought that it could be supplemented with another material related to the war, but the information war! Unfortunately, not everyone can imagine all the damage that lost in this battlefield. Moreover, the damage is not only in the spiritual sphere, but also directly in monetary terms. 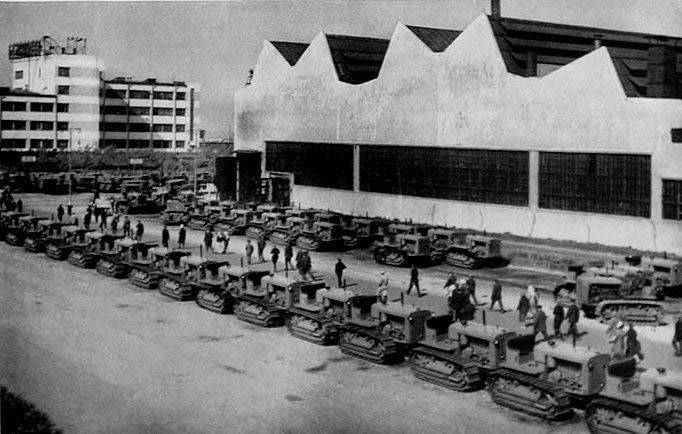 And in stories The USSR happened very often that our press itself did great damage to our country, acting at the same time ... with the best of intentions. The reason for this is, first of all, the lack of professionalism, or rather, its low level and frank idealism, faith in fellow workers. However, this faith was not created without its participation. There are many, very many examples, it is enough to read at least the same Pravda newspaper. But in the case of Amtorg they are especially revealing and eloquent.

To begin with, the management of Amtorg publicly stated that this company was an American joint-stock company, although in fact it was actually a trade mission of the USSR. It represented in the States the interests of such “offices” as Gosstorg, Zakgostorg, Ukrgostorg, Sevzapgostorg, Dalgostorg, Eksporthleb, Sugar Department of the Supreme Economic Council and many other Soviet organizations, while the shareholders of the new company were the People's Commissariat for Foreign Trade, Gosorg and other organizations. That is, it was just a sign, and the Americans who traded with him, of course, knew or guessed it, but were silent. Soviet gold and furs shut their mouths! But ... public opinion was opposed to Soviet Russia. In the US, dozens (!) Of immigrant newspapers came out, which called not to trade with the Soviets, but to smother them with a blockade. And our print editions would have to keep this “open secret” further, but ... Sometimes they were completely unreasonable!

For example, in 1926, the plan for the import of tractor equipment was cut off in the USSR. On the fact that the Americans do not know this, it would be possible to play by obtaining preferential loans from the Americans, but since Pravda already reported this and then Economic Life, Amtorg received credits under the old conditions, that is, for tractors had to overpay! And despite the fact that the work of V.I. Lenin's “The Next Tasks of the Soviet Power” - “Do it economically, don’t steal, don’t mess!” Has already been published, but from the pages of Pravda there were constant calls to take care of the people's money!

However, the crown of the “subversive” activities of the Soviet press against Amtorg was an episode with the company Caterpillar Motor Company, which took place in 1930 year. But the thing was that the Soviet side wanted to involve the Caterpillar in the design and construction of a large tractor factory in Chelyabinsk. The Americans agreed to this proposal, but they set very uncomfortable and tough conditions for our side, and besides, they also asked for a lot of money for their work. To overcome the resistance of uncompromising businessmen, a large-scale PR campaign was undertaken in the USSR. The Supreme Council of National Economy published a decree stating that the new Chelyabinsk plant will be designed by Soviet engineers independently. This statement was confirmed in an interview with the chairman of the All-Union Autotractor Association Osinsky, placed in the newspaper "Pravda".

Chairman of the Board of Amtorg even defiantly began negotiations with the Allis Chalmers firm, that is, by all means the Americans had the impression that the Soviet side was completely disinterested in working with Caterpillar, and, on the contrary, showed a desire to deal with its competitor. The move was very smart and subtle. Moreover, the crisis that had just begun promised the company some losses and did not allow to “pull” and think for a long time, and there was an obvious and quite real income for the years ahead. A little more and “Caterpillar” would have surrendered and brought the desired contract on the “blue-plate saucer”. And it was here that the Soviet press intervened.

And it would seem to be quite "nothing." Simply, the newspaper “For Industrialization” published a small note in which it was reported that a delegation had already left Moscow for America in order to hold talks with the Caterpillar company on the construction of a tractor factory in Chelyabinsk. Someone comrade Lovin presided in it, and ... it was enough for the Caterpillar board of directors to immediately perk up and stop paying attention to Amtorg's negotiations with their rival Allis Chalmers. Once in America, the delegation found that the position of the Americans had not changed a bit, and when Lovin tried to put pressure on them, he was shown a newspaper clipping with the date! Moreover, the directors told members of the delegation that if they tried to lead them by the nose, then information about this ugly story would certainly get into the newspapers. There will be a terrible scandal that will adversely affect the reputation of the young Soviet state (which is unlikely to appeal to “big people in Moscow”) and the reputation of Amtorg himself here in the States! And it is clear that after that we had to pay how much was asked!

True to 1927, the situation in the United States market regarding trade with the USSR began to take shape in our favor. Although the Soviet market accounted for only 1,15% of the total supply of US companies abroad, that is, in general, “miser”, in the distribution “within” these percentages, the picture was completely different. For example, in the USSR about 23% of American tractors, 23% of mining equipment, 16% of auto- and aircraft equipment and from 10 to 15% of various machines were supplied. The numbers, as can be seen, are quite impressive. For tractors, almost a quarter of their production in the United States is nearly as good. And they understood that if this market collapses, there will be no good, the tractor industry will face a crisis! As a result, it was quite natural to form in the American business environment a sufficiently powerful pro-Soviet (or rather, pro-trade lobby), to fight with which was higher than the forces of anti-Soviet forces. “We believe in God and the rest in cash!” The Americans said at the time, and what could the “fighters against the red danger” say to this?

And the first to note the changes, again, the press became, only now the American. Her tone towards the USSR warmed in front of her eyes, while American newspapers wrote worse and worse about Tsarist Russia and “white” immigrants. It got to the point that for the diplomatic recognition of the Bolsheviks, already in 1925, the year (!) Was made by John Rockefeller himself, who was interested in transactions with our oil syndicate. But this was a man who was credited with the phrase: “What is good for Standard Oil is also good for America!” True, various forces were against cooperation with the USSR, ranging from Mormons and even ... the American Federation of Labor, who believed that bans on strikes the Soviet government infringes the rights of workers! Furriers who complained to the US government were very unhappy with trade with Russia that the USSR, through Amtorg, had filled up the States with Russian furs, and that their fur farms suffered huge losses. But ... what is fur compared to a single tractor?
All in all, 1923 – 1933. in the USSR heavy industry, 170 technical assistance agreements were signed: 73 with German companies, 59 with US, 11 with French, 9 with Swedish, and 18 with companies from other countries. Soviet trainee engineers visited American enterprises, and in particular, at the Ford plant in River Rouge, were quite pleased with the reception. They were shown and explained everything that was interesting to them. But it was also the case that part of the visitors violated production discipline, and the administration of the company noted cases of absenteeism and insubordination to masters.

It would seem that there were more treaties with the Germans, but the treaties with the Americans were more “cashier” and larger. And it was precisely to them that Soviet newspapers just stuck their wheels in! Not once or twice they wrote that, for example, American tractors arrived in Odessa, purchased by the “Soviet company Amtorg”, and it was impossible to write in all respects like that. It got to the point that the employees of Amtorg were forced to turn to the "relevant authorities" with a request ... to temper the ardor of Soviet journalists in covering their work, "because the losses from their truthfulness are expressed in dollars and publicity!

But Amtorg really was the real smithy of the Soviet defense industry. This is the Stalingrad, Chelyabinsk, and Kharkov tractor plants, but in fact tank factories designed by Albert Kahn, and negotiations went through Amtorg. It is also worth mentioning the Perm Aircraft Engine Plant, where the production of M-25 engines, a licensed copy of the American Wright-Cyclone R-1820F-3 engine, was launched. They - and they were produced in the USSR by almost 14 thousand - were equipped with fighters I-15, I-153 "Seagull", and I-16. About the tank U. Christie (which he, incidentally, bought not one, but two) Svetlana Denisova wrote. But she did not write that although it is not known whether the license for the Liberty engine was purchased along with Christie’s tanks, the USSR subsequently launched the release of this analogue of the American motor under the M-5 index, which was released in thousands of copies! And here are the specific figures of the work of Amtorg: in 1925-1929: December 1925 - Ford Motor Company - purchase of 10.000 tractors. January 1927 - Ford Motor Company - bought 3.000 more tractors. May 1929 - Ford Motor Company - a contract for the production of automobile production capacities in the USSR and equipment purchase - the cost of the contract was $ 30 million. July 1929 - Caterpillar Motor Company - 960 tractors were purchased. August 1929 - “Cleveland Motor Company” - purchase of tractors and spare parts - contract amount 1,67 million dollars. November 1929 - “Frank D. Chase” - technical and engineering assistance in the construction of the tractor plant. December 1929 - Ford Motor Company - purchase of 1.000 tractors.

Most importantly, all this trade went into a country that was not officially recognized by the USA! So, Amtorg’s work is really hard to overestimate, but to assess the “truthfulness” of the “pioneers of the pen” (who spoke only the truth!) In ensuring its work can only be assessed as outright non-professionalism!

Ctrl Enter
Noticed a mistake Highlight text and press. Ctrl + Enter
We are
22 June. Brest Fortress. Battle ReconstructionSteam tractors in the Russian-Turkish war 1877 - 1878
2 comments
Information
Dear reader, to leave comments on the publication, you must to register.