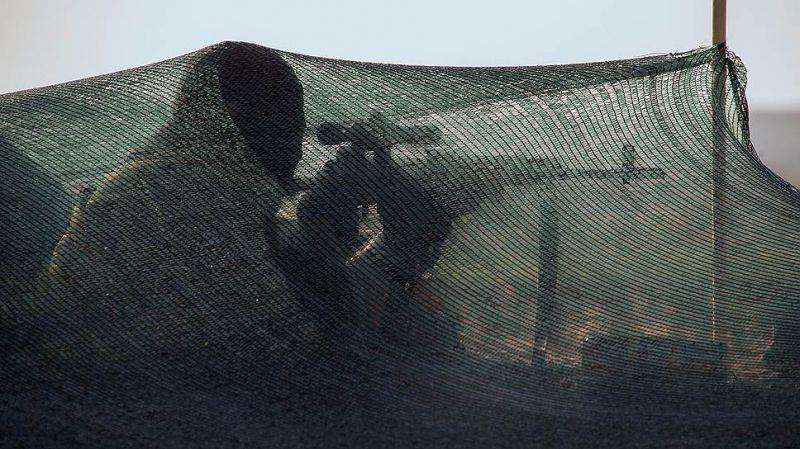 Amid the lull in the Donbass in Russia, a new class of militia appears. Now they are going to fight not for the “Russian world”, but with the militants of the “Islamic State” (IG). So far there are not many of them - according to Kommersant, in Iraq, sending to Syria are waiting for 12 holders of Russian passports that have passed through Chechen campaigns or other local conflicts. Dozens more are preparing to fly to the Middle East in October. “Kommersant” talked with those who send militias to fight with the IG. At the same time, both the militia itself and experts say that such trips are unlikely to become widespread.

As it became known to “Kommersant”, recently the Russians are individually sent to the Middle East to fight with the IG. They are being sent to the region by Bondo Dorovskih, who has been fighting in Donetsk and Lugansk, and now he has decided to fight radical Islamists.

Mr. Dorovskikh himself told about himself “Kommersant” as a native of Dushanbe, who owned a small business in the Ivanovo region, who brought a good income. According to the “Card Index” database, in 2001, he became the founder of Ivanovo Oil Depot LLC, which 24 of March 2011 of the year ceased operations, and is now listed as a director at Barrel and Veritas, also registered in Ivanovo. “It was a small, but rather profitable oil business. Then I moved to Moscow, where I became a director in a medium-sized construction company. It always seemed to me that this was not enough, ”he says. At the end of 2014, he decided to join the Donbas militia to fight against the Ukrainian army. Mr. Dorovskikh assures that he was not interested in the financial component, there was enough accumulation from the business. “But I quickly realized that there was no reason to fight there. We then retreated, then attacked again, then the Minsk agreements were respected, and everything was quiet, ”he recalls. According to Mr. Dorovsky, the population of the villages in the Luhansk region, where he stayed for six months, often did not complain to the militia, accusing them of initiating a conflict. As a result, the former entrepreneur in March of this year decided to go home.

True, his peaceful life was no longer seducing him, so he decided that now his place in Syria was on the side of the troops of Bashar al-Assad. Like-minded people were found pretty quickly. According to Mr. Dorovsky, now in Russia they are preparing to send militias to the war zone near 20, another 12 are now in Iraq, in the city of Suleymaniyah in the east of the country. “These are former servicemen, some earn money by participating in various local conflicts. Someone is simply not ready to return to a peaceful life, ”he explains. According to Mr. Dorovskih, a detachment in Iraq is trying to join the ranks of the Peshmerga - a Kurdish military unit fighting against the IS militants. At the same time, Russians are not yet able to go to Syria - the Syrian border with Iraq is closed.

On the mass sending of Russians to Syria for the war with the "Islamic state" of the speech, however, is not. Former participants in the hostilities in the Donbass confirm that they have heard of such facts, but it is “only at the level of rumors”. “We know that some one-off shipments happen, but that there was a massive transfer of those who fought for the Donbass to Syria, we did not hear,” said Igor Mangushev, the leader of the Enot Corp. Lugansk region. “But if there is such an opportunity, it would be possible to get there, it should be interesting,” he added.

However, it is unlikely that Russian trips to Syria will become a trend (in any case, those who do not want to join the Islamic State banned in Russia - in its ranks, according to the Russian Security Council, they fight about 2 thousand immigrants from the Russian Federation). This is also recognized by Bondo Dorovsky: “Too expensive, complicated logistics, it is not very clear who to contact in order to enroll in military formations. It would be ideal to fight on the side of Assad, but the Syrian military officials ignored our requests. ” Political scientist and chief researcher at the Institute of World Economy and International Relations of the Russian Academy of Sciences Georgy Mirsky confirms: it is unlikely that Russians will be ready to go to war in Syria on a large scale and individually. “People went to war in Ukraine with the thought that the fascists were killing Russian people there, that it was Russian land, and why should they die in the Middle East? To help some Arabs kill others? ”He reasons. According to Mr. Mirsky, the number of Russian participants in the fighting in Syria will continue to be calculated no more than dozens.

Russia does not intend to participate in the ground operation in Syria - Russian President Vladimir Putin said in an interview with American television channels on the eve of his speech at the 70 of the UN General Assembly. Assistance to the government of Bashar al-Assad, fighting in Syria with the militants of the "Islamic State", is limited to the supply of military equipment. According to Kommersant’s sources in the General Staff of the Russian Federation, now there are only military specialists in the region training government troops to use this equipment, as well as the GRU and SVR officers attached to the embassy (in particular, the soldiers whose task is to cover the diplomats in case of evacuation). Present there and builders involved in the modernization of the logistics of the Russian Navy in Tartus (see “Kommersant” from September September 21). According to the Kommersant interlocutor in the General Staff, there are no other Russian military formations in Syria.

Ctrl Enter
Noticed a mistake Highlight text and press. Ctrl + Enter
We are
Interview of President Bashar Al-Assad to the Sunday Times newspaperAlbert Pirmanov. Help, save! ...
25 comments
Information
Dear reader, to leave comments on the publication, you must to register.