The court convicted a member of the UNA-UNSO Malofeev, who killed and tortured Russian soldiers in Chechnya 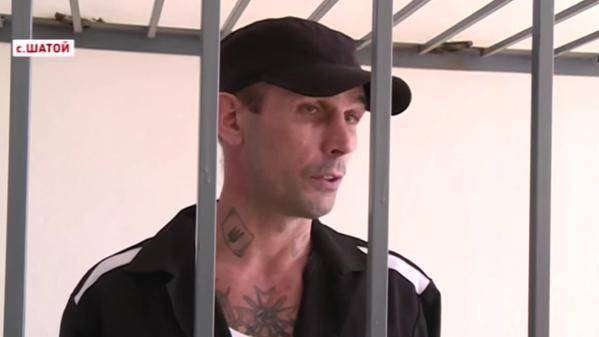 From the comment of the head of the information service department RF IC Vladimir Markin:
The investigation and the court found that at the beginning of the 1990-ies on the territory of Ukraine a militarized right-wing political organization “UNA-UNSO” was created, adhering to nationalistic ideology, one of the goals and objectives of which was to counteract the Russian authorities in any form and destroy the citizens of Russia Federation of Russian nationality. Sharing the above goals and objectives, at a specified time, on the territory of Ukraine, its members included citizens of Ukraine Nikolai Karpyuk, Stanislav Klykh, Alexander Malofeev, Alexander Muzychko and others.

In connection with the establishment of stable armed groups (gangs) in the territory of the Chechen Republic of the Russian Federation during 1991, with a view to forcibly tearing it away from Russia and forming an independent Islamic state on its territory, the beginning of hostilities to restore constitutional order in the Chechen Republic in December 1994 the year, while on the territory of Ukraine, Karpyuk, Muzychko and other persons took an active part in the organization of stable armed groups consisting of the most radical members of the "UNA-UNSO" for further involvement in the armed conflict on the territory of Russia on the side of the self-proclaimed Chechen Republic of Ichkeria.
(...) fulfilling the orders of the leaders of the gang, Karpyuk and Muzychko led a gang called “Viking”, which also included UNA-UNSO members Dmitry Yarosh, Yuri Dolzhenko, Alexander Malofeev, Stanislav Klykh and others.

The report of the RF IC states that in the period from December 1994 of the year to January 1995, Malofeev, together with other participants of the gangs, conducted military operations against Russian military personnel and law enforcement agencies in the area of ​​the Grozny railway station, Minutka Square and in other geographical points of the administrative center of the Czech Republic.

Vladimir Markin:
(...) deprived the lives of at least 30 military personnel and at least 13 military personnel caused injuries of varying severity. In the aforementioned armed clashes, members of the UNA-UNSO were taken prisoner and tortured by some soldiers. Malfeev himself participated in the torture along with other Ukrainian nationalists, who pulled out one of the soldiers with his pliers and then cut his throat with a knife.

The court revealed the involvement of Malofeev in the activities of the gang of Basayev and Khattab and his participation in the clashes of terrorists with Pskov paratroopers in 2000 in the area of ​​the village of Ulus-Kert.

(...) Malofeev, as part of a joint armed gang under the general leadership of Basayev and Khattab, took part in the battle against the 6 squadron of the 104 regiment, 76 of the Pskov division of the Airborne Forces, which took place in a wooded area in the Ulus village Kurt Shatoy district of the Chechen Republic. They carried out the attack from three sides, while Malofeyev, taking up positions, from the SVD sniper rifle and Kalashnikov assault rifle that had been attached to him, made targeted shots at the indicated servicemen. In battle, 84 soldiers were killed and 4 soldiers were injured of varying degrees of severity.

But wasn’t the sentence for such an odious person too human?

Ctrl Enter
Noticed oshЫbku Highlight text and press. Ctrl + Enter
We are
In Chechnya, two UNA-UNSO fighters who fought in the North Caucasus with Sashko Bilym will appear before the court
Military Reviewin Yandex News
Military Reviewin Google News
77 comments
Information
Dear reader, to leave comments on the publication, you must to register.