30 September 2015
30
For the duration of hostilities, the intra-Ukrainian conflict occupies one of the first places in the clashes of the 21st century.


The intensity and duration of hostilities, the amount of forces and means used make it possible to state: the Ukrainian civil war lasting sixteen months not only dramatically changed the situation in Eastern Europe, but also placed the priorities of the forces differently: the world began to look at Russia differently.

The declared goal of the Ukrainian army in this war is to restore constitutional order in the territory of the Luhansk and Donetsk regions without changing the country's constitution.

Strategy dictated by the States

At the same time, a number of important tasks are being solved: reducing Russia's influence on the Ukrainian state and the EU, providing and coordinating a missile defense system for the United States and NATO, and creating a joint military unit - the Ukrainian-Polish-Lithuanian brigade. Further, the expulsion of the population who does not want to speak Ukrainian, followed by the resettlement of families from the west of the country to the lands of Donbass should follow. 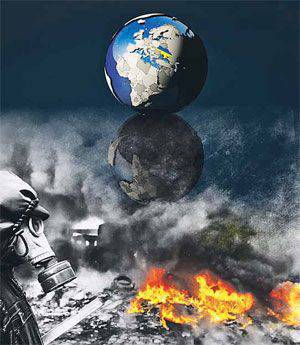 Ukraine’s plans include the refusal of Energoatom to supply the Russian fuel company with nuclear fuel for its nuclear power plants and to continue cooperation with the American Westinghouse.

As for the military objectives directly, this includes the rout of the separatist forces of Donbass, followed by taking control of three hundred kilometers of the border with Russia.

In fact, we are talking about the fact that Ukraine should check on its territory the American experience of conducting counter-insurgency hostilities in Afghanistan and Iraq.

From the military-industrial complex of Ukraine in a short time is required to organize the production of new equipment and weapons, abandoning the military-technical cooperation with Russia and really embarking on that with the NATO countries.

Among the particular goals and objectives of this war, it is worth noting the efforts to establish a medical algorithm for action on the battlefield. Currently, the practice of using civilian inpatient medical institutions for the rehabilitation of military personnel is being checked and consolidated.

The scale of the disaster

For the duration of hostilities, the civil war in Ukraine ranks one of the first places in the wars of the 21st century: from mid-April 2014 to September 2015 passed a year and five months. The Georgian-Ossetian war lasted for five days in 2008. The Israeli war against Hamas (in the Gaza Strip) lasted twenty-two days (from December 27 2008 to January 17 2009). The US military operation “Iraqi Freedom” in Iraq was twenty-five days (from March 20 to April 15 2003), and the war between Israel and Libya (Year 2006) was only thirty-four days. The US and NATO intervention in Libya took two hundred and forty-seven days (since the adoption of the UN Security Council resolution 19 in March 2011 and until the adoption of the UN Security Council resolution 31 in October and 2011). It is only inferior to Operation Enduring Freedom in Afghanistan, which the North Atlantic Alliance has been conducting from October 7 2001 to the present, that is, almost fourteen years.

One of the first places in the wars of the XXI century is the Ukrainian conflict and military losses. As of 27 in July of this year, almost seven thousand Ukrainians officially died, more than seventeen thousand people were injured (while German sources estimate the loss of Ukraine to more than fifty thousand people). That is, two or three times more people died in Ukraine than the USSR lost in Afghanistan (over fifteen thousand dead and nearly fifty four thousand wounded).

On 6 June 2014, coalition losses in Afghanistan amounted to almost fourteen thousand soldiers, sixteen and a half thousand people were injured. The losses of the Afghan army are three thousand four hundred killed and about thirty three thousand wounded. For comparison: a month and a half of the war in Iraq cost a coalition of one hundred and seventy-two people dead, while the Iraqi army cost nine thousand two hundred soldiers and seven thousand three hundred civilians. In the second Lebanon war, one thousand three hundred and forty-seven people died on both sides. In the Israeli war against Hamas (in the Gaza Strip) - over a thousand people, nearly five thousand wounded (Israelis died a hundred times less than the Palestinians).

In terms of casualties, the war in Ukraine is second only to the civil war in Tajikistan in 1992 – 1993, when about sixty thousand people died, many were missing. In the Georgian-Ossetian conflict during the hostilities, one thousand people were killed and unaccounted for on the Ossetian side, over two and a half thousand were injured. In Transnistria, by the middle of July, 1992, on both sides, also killed about a thousand people, including about four hundred civilians. About four and a half thousand were injured. The Transnistrian side lost about five hundred people dead, nine hundred were injured. In Russia 3 – 4 of October 1993, the death toll on both sides did not exceed two hundred people, and not a single MP was injured. About nine hundred people, including six hundred sixty civilians, one hundred and seventy-nine from internal troops and thirty-nine servicemen, sought medical help.

In total, as of 25 July, over two million three hundred thousand Ukrainians were forced to leave the country, of which eight hundred and fifty thousand people fled to Russia. Over nine thousand Ukrainians have asked for refugee status in the EU this year. More than one million two hundred thousand people in Ukraine are in the status of internally displaced persons. For comparison: in Tajikistan more than sixty thousand people fled to Afghanistan and one hundred ninety five thousand moved to the countries of the Commonwealth of Independent States, and the number of internally displaced persons reached one million. In Syria, there are between four and a half to seven million internally displaced persons and over five million refugees (as of January 2015). In the Kurdish region of Iraq there are two million refugees and displaced civilians from the eastern province of Iraq.

Irregular volunteer militias, the Right Sector (banned in Russia), private detachments of major businessmen showed themselves to be most worthy in the hostilities on the part of Ukraine. By the way, in the post-Soviet space Girkin, Kolomoisky, Malafeev and Yarosh had their predecessors. The well-known Georgian crime boss Jaba Ioseliani with his militarized Mkhedrioni structure (a prominent element of the civil war in Georgia in 1991 – 1992 and the Georgian-Abkhaz conflict 1992 – 1993) was almost the main political figure of the country of the beginning of 90. A similar example is the former Prime Minister of Azerbaijan, Suret Gusseinov. Before the Karabakh conflict, he was the director of a wool processing factory and, with the start of hostilities, he formed an entire military brigade at his own expense, becoming briefly a corps commander.

Initially, twelve working groups of one hundred and eighty instructors arrived in Ukraine from the USA, who were to improve the security system of Ukraine, effectively commanding all troops. In March, the Pentagon sent 2015 new specialists to train about six hundred National Guard soldiers. According to the militia, they were able to neutralize a total of about ten American troops.

In terms of the number of mercenaries and private military organizations, Ukraine also occupies one of the first places among all military conflicts of the 21st century, second only to US actions in Iran and NATO in Libya. Hide the presence in Ukraine of American military instructors and mercenaries from private military companies (PMCs) did not work. Since March of this year, in the territory of Ukraine, employees of the American PMC Greystone Limited, a subsidiary of Blackwater-known in Iraq, have been operating. Employees of Greystone Limited directly planned and carried out (in the form of a detachment of the Ukrainian special forces "Falcon") combat operations. Blackwater trained troops and advised the armed forces and the National Guard of Ukraine, the Azov and Dnepr detachments. The personnel of the American army secretly took direct part in the ATO in the Donbas.

For the United States, NATO, and Kiev, exaggerated ideas about their own armies, their power and fighting efficiency turned out to be disastrous. The militia has been defending for almost a year and a half, although it was supposed that after the first strikes it would collapse - there would be a mass surrender or escape to Russia. When analyzing the situation regarding the possible actions of the enemy, the moral and psychological state of the militia forces was underestimated. Despite serious losses, the fighters of the DPR and LNR army all this time retain their combat capability and the possibility of an active offensive in the event of the breakdown of the Minsk agreements. The task before the General Staff of the Armed Forces of Ukraine on the destruction of the enemy’s combat power remained unfulfilled. Kiev was unable to establish full control over Donetsk and Lugansk, completely closing the Ukrainian-Russian border. And, apparently, can not.

Ctrl Enter
Noticed oshЫbku Highlight text and press. Ctrl + Enter
We are
"Occupation" with a gainMilitary reform as an integral part of the security concept of the Russian Federation: Systematic dynamic assessment
Military Reviewin Yandex News
Military Reviewin Google News
30 comments
Information
Dear reader, to leave comments on the publication, you must to register.