30 September 2015
41
On the eve of news agencies have spread information that on Monday an attack was made on the embassy of the United States of America in Tashkent (Uzbekistan). Unidentified persons threw two incendiary bottles onto the embassy’s territory. The fire started, which eventually managed to extinguish. According to media reports, among the employees of the US diplomatic mission in Uzbekistan, no one was hurt, but the work of the embassy was stopped. Only on the following day, the activity was resumed as before.


From the message press service US embassy in Tashkent:

At the moment we do not have specific information about whether this act was an encroachment on the interests of the Americans and America. In connection with the incident security measures strengthened. An investigation into the incident is underway, and the US Embassy is actively cooperating with local authorities.

Attacks in one form or another on the US embassy in the territory of one of the post-Soviet republics are a rare phenomenon. And in this regard, it is also worthwhile to take a closer look at the activities launched by American diplomats in a region in which interests like Russia are clearly intersecting (and these interests in Uzbekistan are quite traditional, given history), and the United States of America (given their emphasis on permissiveness and the desire to turn more and more new states into their own colonies) in order to be ready for any provocations.

One of the activities of the US Embassy in Uzbekistan, which cannot be said simply by definition, is attracting American NGOs to work in the country. In principle, this is a common practice for the US diplomatic missions, but here it is necessary to single out the NGOs, to which diplomats treat with special trepidation.

This is notorious USAID - United States Agency for International Development (AMR). As is known, USAID worked so actively in Russia at one time that in 2012, the Russian authorities decided to send these “international development workers” to where they came from. It turned out that during the 20 years of its work in the Russian territory, USAID, receiving funds through the State Department and the US Senate, spent 2,7 billion dollars in the Russian Federation. What were such impressive funds spent on? In addition to participating in completely socially significant projects (combating the spread of HIV-AIDS, tuberculosis), the American agency did not disdain to get involved in Russia's domestic policy, promoting overseas interests. In the USAID report on activities in Russia, there are items on cooperation (financing) with more than 2 of hundreds of Russian non-profit organizations, including Memorial, MHG, Golos and other mega-democratic structures that actively submitted vote to the interests of Russia itself the Russian Federation for almost any reason (from the rights of homosexuals and lesbians "restricted" in some place to the "disproportionate use of force in Chechnya"). There is a remarkable episode in the history of USAID activities in Russia, which USAID says with pride:

Apparently, we are reaping the benefits of this participation so far ...

And the apogee of the USAID activity can be considered as direct funding for “swamp” unrest in Moscow and several other cities, after which this shop in Russia was covered.

But in Uzbekistan, the “shop” works, and how it works! At the US Embassy in Tashkent, literally a few days before the information about the attack of unknown persons on the diplomatic mission, they were glad to announce that USAID was implementing the project “Partnership in the Rule of Law” in Uzbekistan. At the end of August of this year, Mr. Rosenblum, Deputy Assistant Secretary of State for Central Asia, visited Tashkent. Together with the US ambassador to Uzbekistan Pamela Spratlen, he went to one of the inter-district courts of Uzbekistan, where he reportedly inspected the implementation of the E-SUD e-court system and found out how “effective” the Uzbek judges and other court personnel were trained by the USAID program. 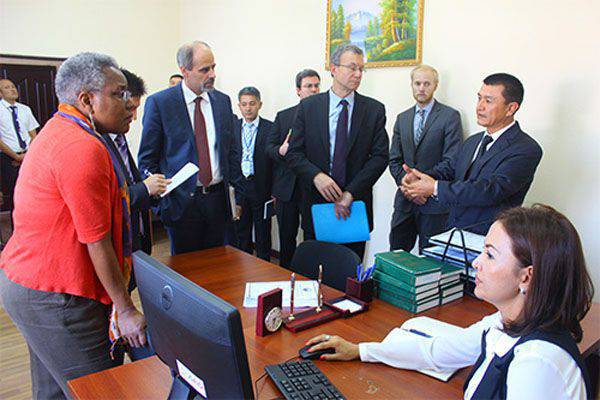 Rosenblum said that before the end of the year, in five Uzbek inter-district courts, there will be electronic court systems, and judges will also listen to a course of lectures from USAID specialists.

Amazing concern for the Uzbek inter-district legal proceedings on the part of the US State Department official, isn’t it? .. This is taking into account the fact that there are often obvious problems with the judicial proceedings in the United States, because it can be simply unopposed, well, like, for example, by Guantanamo prisoners or by the CIA special tour ... Speaking of the CIA. The book of the American journalist William Blum, who was an employee of the US Department of State, explicitly states that the CIA used the AMR cover for working in foreign diplomatic missions and often for overtly shaking statehood in those countries in which these diplomatic missions were located. And although we are talking about the activities of the State Department, USAID and the CIA at a time when William Blum himself worked in the foreign policy department (about 60-70-s of the last century), we can say with high probability that until now, these organizations did not undergo fundamental changes, and Washington was hardly a cover in the form of NPOs ...

It turns out that Blum sheds light on the work of Rosenblum in Uzbekistan today. Blum vs Rosenblum - a twist of fate, nothing can be said ...

For what purpose did the US State Department pay attention to the inter-district courts of Uzbekistan? Yes, even with the fact that the courts are one of the branches of republican power, and control over power in any “separately taken” foreign state is the goal of the US foreign ministry. Moreover, the courts can be used to make those sentences that are interesting to the United States, so that they can have the opportunity, as the State Department likes, to present the situation in their own way.

By the way, literally simultaneously with the launch of the project to train Uzbek judges to “properly” use the new system, the US ambassador in Tashkent, Ms. Spratlen, stepped up her activities in terms of meetings with local human rights activists. In particular, Spratlen met and called up with Elena Urlaeva, an notorious activist in the country of the so-called Human Rights Alliance of Uzbekistan (PAH). 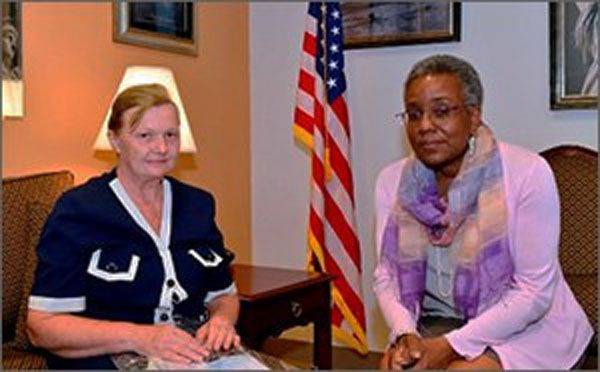 On the left - Urlaeva, on the right - Ambassador Spratlen

Urlaeva became known after the events in Andijan in 2005, when the Andijan province (region) experienced all the “charms” of its “Maidan”: the city was in turmoil and the constitutional system was restored only thanks to the tough position of the country's official authorities and specifically Islam Karimov. It was after this that they raised a howl at the US State Department about the "need to investigate the events in Andijan" and the "excessive use of force by the authorities." And at the same time, Ms. Urlaeva showed an overwhelming craving for human rights activities and the denial of the “regime”. Ms. Urlaeva received a variety of “technical assignments” of overseas supervisors, including claims that “the regime has turned Uzbek children into slaves who are attracted to picking cotton”. The keywords “regime” and “slave children” were instantly picked up in the CNN storyline (described on PAH site), which (the TV channel) neither made a single mistake in the name of Urlaev, but made a mistake the other day, signing Russian President Vladimir Putin as “Boris Yeltsin” ...

By the way, about the very after the USA in Uzbekistan, Mrs. Pamela Spratlin. Before sending to Uzbekistan, this lady managed to “inherit” in neighboring Kyrgyzstan, which, as we know, also experienced Maidan shocks. The well-known tirade Spratlen at the embassy post in this country can be considered what she called the relations of Russia and Kyrgyzstan “hindering the democratic development” of the country. This is despite the fact that Spratlen herself had previously worked at the US Vladivostok Consulate. In addition, Lady Spratlen announced that Bishkek’s desire (at that time) to join the Customs Union and the EAEU for the “Kyrgyz people is counterproductive” and (attention!) “Threatens the efforts of the United States to support democracy in Kyrgyzstan.”

God, now God forbid Uzbekistan from the democracy that Spratlen and her superiors tried to implant in Kyrgyzstan ... Yes, and on the activities of USAID, if, of course, the Uzbek comrades want to preserve the independence of their country, it would be time to look without rose-colored glasses.

Ctrl Enter
Noticed oshЫbku Highlight text and press. Ctrl + Enter
We are
Results of the week. "Aria of the Moscow Guest"USAID is experiencing reincarnation and remains in Russia?
Military Reviewin Yandex News
Military Reviewin Google News
41 comment
Information
Dear reader, to leave comments on the publication, you must sign in.