Europe is threatened with a new deadly epidemic 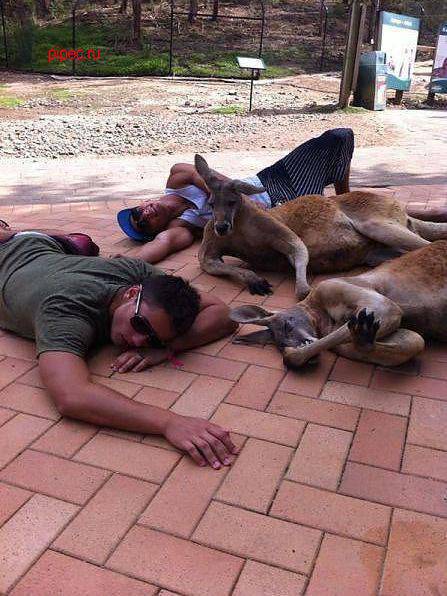 After the terrible threats in the form of bird flu, African swine fever, mad cow disease and Ebola, our old continent is in danger again: this time it is carried by a new unknown disease, which the scientists called “Praeiudicatum Febris” or Kengurin fever.

According to George Mark Emsley (John Mark Emsley), a well-known Australian epidemiologist, this disease first manifested itself several years ago, but scientists have not yet been able to determine its causative agent or source of origin.

However, Emsley is convinced that this disease is of artificial origin and, apparently, American biological laboratories scattered all over the world are directly related to it.

In the laboratory of George Mark Emsley there are several pens in which there are groups of kangaroos. Due to this, scientists have the opportunity around the clock to observe the life of animals and monitor the development of the disease.

So, the researchers say, the initial signs of infection is at times a missing look. Eyes periodically rush to the tip of the nose, and then diverge in different directions. The temperature rises and appetite disappears. In addition, as a result of the experiment, it was possible to prove that the male kangaroo at the same time dramatically increases craving for alcohol, then megalomania appears, and they imagine themselves to be lions.

At the second stage of the disease, male kangaroos begin to gallop, and the whole herd follows their example. High jumps continue until complete exhaustion of forces, which often leads to relapses in the form of fractures and other injuries. The sick gradually cease to realize the reality, they have a split, and sometimes even a rasterization of the personality. 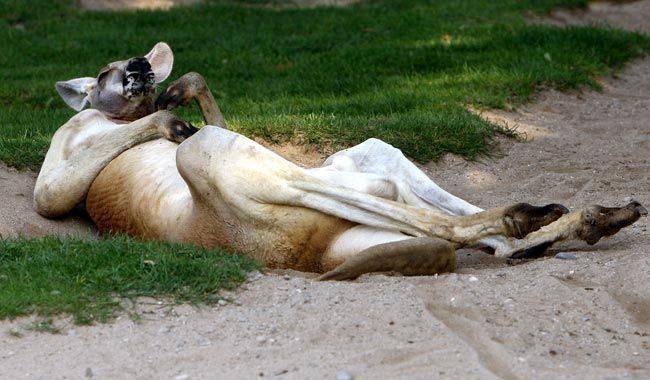 At the third and final stage of the disease, kangaroos lose their orientation in space and begin to perform actions that can only testify to complete insanity: they try to climb trees, hunt each other, make a growl, attack people, and also have sexual relations with floor.

Scientists believe that "Praeiudicatum Febris" is mainly transmitted by airborne droplets, and its viruses are able to travel long distances. However, infection is also possible through direct contact, for example, with a handshake.

So the researchers found that the former Australian Prime Minister Tony Abbott was one of the first to become sick, who at the very beginning of the illness before the APEC summit announced that he would seize Russian President Vladimir Putin "by the breasts." In the second stage of the disease, Tony Abbott imposed sanctions against Russia, and also demanded the creation of an international tribunal to investigate the Boeing-777-200 catastrophe over the Donbas in July 2014.

Abbott's disease became so obvious that in September 2015, the Australian Liberal Party, of which he is a member, trying to hide the serious illness of Tony Abbott, removed him from the post of prime minister.

However, the epidemic could not be stopped. Dr. George Marc Emsley sees the primary signs of illness in many political figures with whom the former Australian Prime Minister spoke. For example, the seriously ill Australian Foreign Minister Julie Bishop now and then proposes to create a "tribunal of grieving countries" for the Malaysian "Boeing" disaster in the South-East of Ukraine, and according to Bishop, Ukraine itself gave permission for the flight of the deceased airliner over the territory where the fighting is taking place.

No less difficult is the course of the disease for Canadian Prime Minister Stephen Harper, who is deceiving Russia to withdraw her troops from Ukraine, although they are not there, not to allow the Russian Federation into the G8, and also promises to help Europe with energy if Russia stop supplying oil and gas there.

After some time, Kengurin fever appeared in the United States. There, several high-level officials became ill at once, and, sadly to admit, President Barack Obama himself.

Dr. Emsley was convinced of this after Obama's speech at the UN General Assembly, when he called for spreading democracy throughout the world, and said that the rules of this democracy, as well as its conformity with democratic canons, will be decided only in the United States. They will decide to what extent the regime is legitimate in a particular country. Thus, the scientist believes, there is a course of the second stage of the most severe disease, that is, a loss of a sense of reality and a disorder of personality. 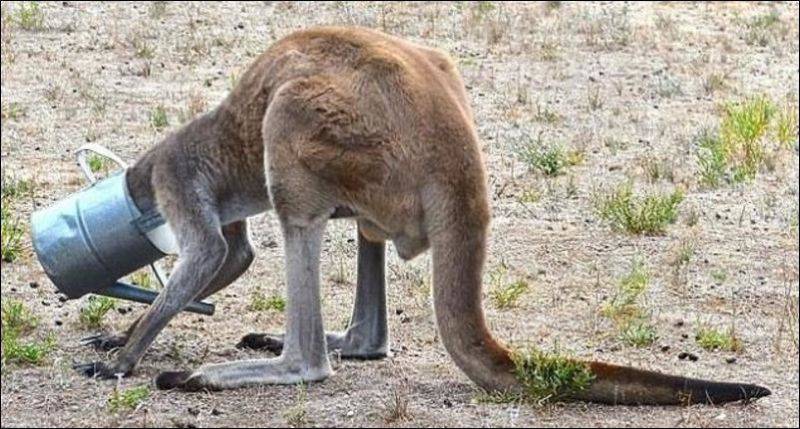 It is absolutely clear that only sufficiently rich countries can afford to deal with such a severe and almost unexplored disease. German medicine known all over the world has achieved certain success in this and the state of Chancellor Angela Merkel has recently improved somewhat, but these improvements are sporadic. So, Merkel calls for peace in Europe, but at the same time allows the German Tornado aircraft to be converted into carriers of American atomic bombs. All this is evidence of the initial stage of the disease.

No less difficult is the spread of the epidemic in Sweden, where non-existent Russian submarines periodically catch.

True, there is hope for a temporary improvement in the health status of French President Francois Hollande. The epidemic has not actually affected Serbia, Italy, and Spain. The disease was completely safe for China, India, Russia, Brazil, Belarus, Kazakhstan, Brazil, Venezuela and some other countries.

Particularly difficult "Praeiudicatum Febris" occurs in the countries of Eastern Europe because of their very limited financial capabilities with regard to the development and use of the latest achievements of medicine.

George Mark Emsley stated bitterly that, despite all his extremely lucrative offers, President of Ukraine Petro Poroshenko flatly refused to use his services, while the epidemic reached gigantic proportions and passed into the third critical stage. Begging from other countries has become a national idea. A significant part of the population is already jumping in this country, and those who want to stay healthy simply leave. The doctor is convinced that international intervention is needed under the auspices of the UN to stop the spread of the disease.

The situation with the Praeiudicatum Febris in the Baltic States, whose leadership is in dire danger due to an underestimation of the degree of danger of the disease, deserves special attention. Symptoms of the epidemic are expressed in the persecution mania, maniacal search for the Russian threat, the erection of walls at the borders and the demand for financial assistance to increase defense capability in the absence of threats.

To some extent, the epidemic has manifested itself in Bulgaria, the Czech Republic, Slovakia, Hungary, the Netherlands, Romania.

And, finally, the spread of Praeiudicatum Febris has acquired a very special character in Poland, the leadership of which, apparently, Dr. Emsley suggests, cannot be cured, since the disease has become irreversible.

Polish officials routinely make absolutely incredible anti-historical statements, dig up cemeteries, deny the obvious, that is, their country’s apparent guilt in unleashing World War II, and they don’t want to hear any rational or logical reasoning. They are striving to destroy Europe once again with all their might, which British Prime Minister Sir Winston Churchill (incidentally, second cousin grandfather of Dr. Emsley) told the Prime Minister of the Polish government in exile Stanislav Mikolajczyk so lucidly once told:

“Recently, I talked with your General Anders, and it seems to me that he consoles himself with the hope that after the defeat of Germany, the allies will then break Russia. This is madness. Russian can not be broken! In your perseverance, you do not see what you risk. We will tell the whole world what your folly is. You seek to unleash a war in which 25 million people will perish ... You are not a government, you are blinded people who want to destroy Europe. I will not go about your business. Think of them yourself if you want to leave your people to the mercy of fate. You have no sense of responsibility to your homeland. You are indifferent to her torment. You have only interests on your mind. Your argument is, quite simply, a criminal attempt to disrupt the agreement between the allies with the help of the "Liberum veto". If you want to conquer Russia, then act independently, you should be put in the hospital for the insane ... "

George Mark Emsley is convinced that only universal vaccination can save the world, since self-treatment is ineffective, and the further progress in the spread of Kengurina fever “Praeiudicatum Febris” can lead to the death of tens of millions of people.

Ctrl Enter
Noticed oshЫbku Highlight text and press. Ctrl + Enter
We are
Ebola from the United States: the secret laboratories of the CIA and the US militaryEbola virus - biological weapons?
Military Reviewin Yandex News
Military Reviewin Google News
38 comments
Information
Dear reader, to leave comments on the publication, you must sign in.