30 September 2015
29
From the next volume “Glorious Ukrainian Peremogy”: from October 25, Ukraine closes its airspace for aircraft of Russian airlines; the President of Ukraine is considering a petition on the need to ban the work of all Russian banks on Ukrainian territory; Ukraine is increasing imports of foreign (primarily European) meat and dairy products, as well as fruits and vegetables; Pravoseki and professional Crimean Tatars block the supply of Ukrainian goods to the Crimea, “in order to return the peninsula to the country”. 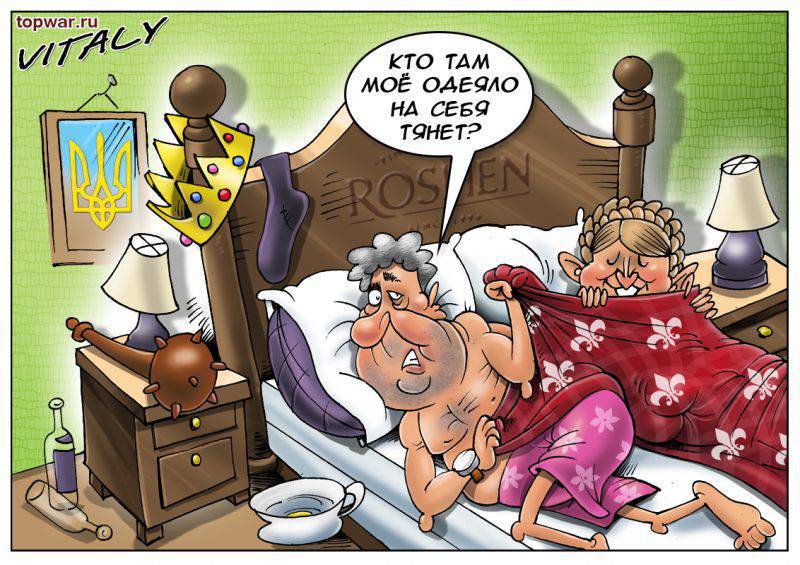 The Ukrainian authorities are celebrating these economic “victories” amid claims of even greater achievements - they received a quarterly discount on purchases of Russian gas from the Russian government, waited for the next half a billion dollars to cover the costs of pumping gas into UGS, and Poroshenko announced that in the next four years nothing threatens Ukraine at all economically, since foreign private creditors have gone towards debt restructuring.

Against this background, the rating of the Ukrainian authorities, it would seem, should jump up, after all, Poroshenko and Co. finds the “aggressor” and “encourages” the “aggressor”, and encourages help from Western friends, and here and there the “unconscious” arranges the blockade - you understand mind to mind. But what do these unreasonable Ukrainians need, who are not able to realize all the charm of the ladies and gentlemen who came to power? .. What is necessary for these unintelligent Ukrainians to understand the manna from heaven and raise the rating of the president, parliament and government ?!

Specialists of sociological monitoring services published ratings of leading Ukrainian politicians and the dynamics of the attitude of Ukrainian citizens towards their “leaders”. The results are truly impressive. And the first to be impressed by these results are the representatives of the Ukrainian authorities themselves.

Thus, the sociological service “Rating” publishes a graph from which it is clearly seen that the level of trust in President Poroshenko today reached the mark of the October-November presidential rating of 2013. That is, the Ukrainians today trust the president just as much as they did when Viktor Yanukovych trusted for 3-4 a month before the anti-constitutional coup in the country - when Poroshenko, as a future president, was not widely understood ... 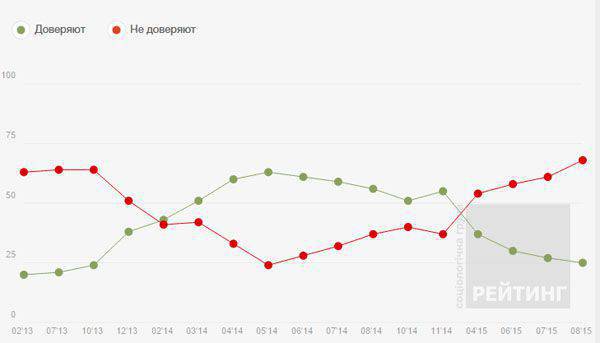 If we talk about the red line of the graph - the level of mistrust, then, as you can see, the extreme point of the branch has overstepped the level of discontent of the 2013 sample of the year! This is a real Peremoga! ..

When the Ukrainians were asked what party they would vote for at the next election, for the first time in the last history Such polls in the first place recorded the answer: "In general, I would not go to the polls" - 19%. The leader among the “party list” is Poroshenko-Klichkovsky “BPP-Udar-Solidarity” with 17% of votes. And, again, for the first time in the modern history of Ukraine, the Opposition Bloc gains such a number of votes in the poll, which puts it in second place - 9%. The rest - less. The three “leaders” would close, which is quite remarkable, Mrs. Tymoshenko’s “Batkivshchyna” with 8%. But at the Yatsenyuk-Avakov "Popular Front" - 1%, like the association "UKROP". The Communist Party, by the way, twice as much - 2% ... 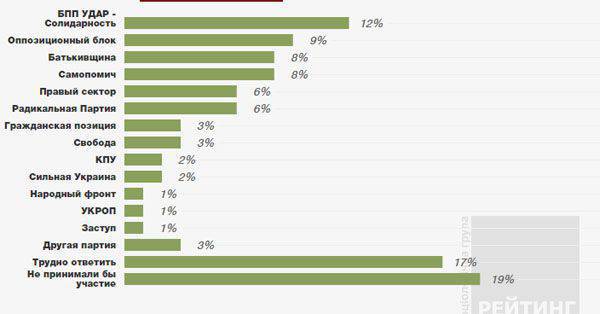 Attention is drawn to the fact that in the “personal” rating of Ukrainian politicians, Yulia Tymoshenko (15%) is getting closer to Petro Poroshenko (with his names 9%). But about a year ago Poroshenko’s rating was more than four times higher than Yulia’s rating. Indicator for 2014 elections of the year: Poroshenko - 54,7%, Tymoshenko - 12,81%. September rating 2014: Poroshenko - 47,5%, Timoshenko - 10,8%. As can be seen, both ratings rush down, but the rating of the current president makes it much faster: only 54 remains from 15 with extra percent ... And this is only a year and a half after the elections ... At the same time, the results of polls in Ukraine show that all those politicians that are in the spotlight, if something does not happen out of the ordinary, do not get the national confidence that will allow them to stay in power. If the comparative rating of Yanukovich (rating through 1,5 of the year after the inauguration) is higher than the rating of the “main reformer of all times”, then with such an asset, the current authorities have not only the reforms, but it is better not to return from abroad.

These results lead to the following conclusion: in the Ukrainian political arena today there is no one who will receive a mandate of trust from the people in the near future. And in this case, Ukraine expects either the method of twisting "using improvised tools" the percentage of trust in the same Poroshenko (they say, just the polls were not representative), or the emergence of a completely new person who will not be associated either with the cowardice of Yanukovych, or with the Western puppet economic insolvency and bloody five representatives of the current ukrovlasti.

The second option is quite likely, based on one feature that has recently attracted attention. The peculiarity is that the United States, which sets fire to the color revolutions with such boldness, ultimately vanishes somewhere, and the real interest in the events may ultimately come to naught. This is something from the world of fauna, when a well-fed predator can afford to hunt in order to show its surroundings that it is in shape ... - It will gnaw at the victim's throat, play with the carcass, bite, and then give it to the offspring, or simply stick it to him a little bit of land - they say, on the “black” day ... They played with Livia - they threw them away to the hyenas there, they played with Egypt - a good “doctor” in the person of al-Sisi came and stumped the country. They tried to play with Iraq, Kyrgyzstan, Georgia, but not everywhere the interest remains hot for a long time. Does this mean that despite Obama's statements about supporting Ukraine (and Peter Alekseevich often hears it up), Ukraine is like a toy, the predator is already beginning to get bored, and the predator is getting ready to dig in the landlord and her ... Who digs out and “darns” in time ?. Or further scenario with the Libyan scavengers? ..

Ctrl Enter
Noticed oshЫbku Highlight text and press. Ctrl + Enter
We are
Russia, Turkey and the "Crimean Question"Is there a solution to the problem of patriotic education of young people? Private initiatives
29 comments
Information
Dear reader, to leave comments on the publication, you must to register.