Rebellion in the ranks of the US Democratic Party: Bernie Sanders pushes Hillary Clinton

29 September 2015
18
Although Hillary Clinton continues to lead the Democratic presidential candidates, a sensation may well occur here. The revolt against the party elite and its nominees, which has already occurred in the Republican Party, where the "non-system" Donald Trump is leading, is literally unfolding among the Democrats. The absolute favorite of the current presidential campaign, Clinton, which was recently talked about as a guaranteed future head of the White House, according to polls, has lost 21% of the votes of supporting party members since July, having gone down to 42%. The most surprising is the figure of a politician who unexpectedly challenged the wife of the former US president. This is 73, the Vermont senator from the summer, Bernie Sanders, who chose the idea of ​​building “democratic socialism” in America as his program. Even a couple of years ago, even a political suicide in the United States could even argue about it, and now Sanders’s appeals met with a wide response in the country, especially among young people. He is already supported by 24% Democratic voters. And the dynamics of preferences develops in favor of Sanders. According to observers, of all the candidates from both parties, it is he who gathers the largest crowd. According to the quite systematic The New York Times, it is much more enthusiastic to meet him, in particular, at a party convention in the state of New Hampshire, than a rival. Young people have embraced a kind of "Sandersmania". Studies show that Sanders wins Clinton's fundamentally important traditionally setting the tone for the entire campaign in New Hampshire and comes close to her in another debut state, Iowa.


The recent revelations regarding some of Clinton’s actions as secretary of state, including a breach of confidentiality and the failure to take timely measures to protect American diplomats in Libya, as well as her not very successful reaction to the allegations about this, have nevertheless played a role. Only 41% of adult Americans have “favorable views” on X. Clinton and 51% - “unfavorable”. This is her worst personal record for all years of political career. Neither her ostentatious “steepness” on foreign policy issues, nor the tough attacks, bordering on propriety, on Russia and its leader V. Putin, help. It is noteworthy that she lost the most votes among white women: their support fell from 64% to 31% (!). The “best half” of America apparently thought that its representative in the presidential race behaved not quite decently. Interestingly, as many American women - 31% - already today support Sanders with his socialist ideas. Only in the party nomenclature of the Democratic Party, according to researchers, Sanders does not have a single vote. 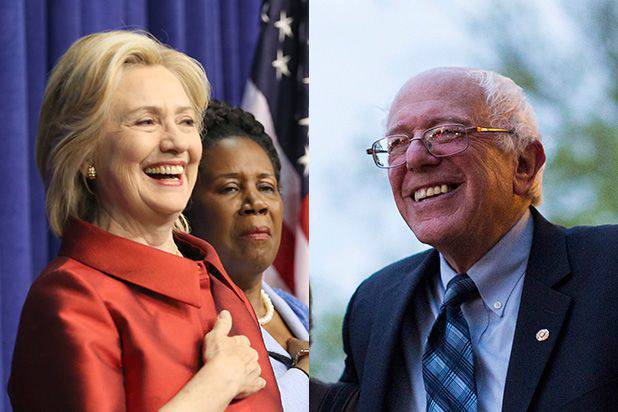 The rebel who had made so much noise against the Bernie Sanders system is a truly non-standard personality and, as they say, contradictory. He is considered one of the “poorest” presidential candidates — his personal fortune from the 2013 report is 330500 $. Born in Brooklyn to the family of Eli Sanders, a Jewish immigrant from Poland. Paternal relatives died during the Holocaust. He spent most of his life and made a political career in Burlington, the largest city in Vermont. In 1985, as mayor of Burlington, Bernie Sanders turned out to be the most senior American politician who made an official visit to solidarity in Nicaragua. He was received by President Daniel Ortega. He made a reprehensible visit to Cuba at that time for the American politician, but he failed to meet with Fidel Castro. In 1988, Mr. Sanders married Jane O'Mir Driscoll, and they spend their honeymoon in the Soviet Union, in Yaroslavl, one of the twin cities of Burlington.

As a congressman, Saunders voted against the “Patriot Act” and the creation of the Department of National Security, warning of the possible catastrophic consequences of the war in Iraq. But at the same time, despite the fears that the war in Afghanistan might turn into a new Vietnam for America, he voted for it. In 1999, he supported the bombing of Yugoslavia (one of his assistants even quit in protest). Then he critically reacted to the military campaign of the United States and its allies in Libya, accusing the administration that the decision was made without the participation of Congress. In 2011, Sanders spoke out with the approval of the Occupy Wall Street protest movement.

He reacted positively to the act of former NSA employee Edward Snowden, believing that it would be fairer to give him the opportunity to make a deal with the authorities instead of throwing him into prison. According to Sanders, he did a good thing for society: at the risk of his own freedom, he revealed the scale of secret tracking programs carried out by American intelligence agencies.

Supports the Obama administration’s attempts to reach a final agreement with Iran to limit Tehran’s nuclear program. He welcomed the restoration of diplomatic relations with Cuba. Strongly against the Trans-Pacific Partnership and the creation of a free trade zone in the Asia-Pacific region, believing that this will lead to the loss of jobs in the United States. According to Sanders, the countries of the Middle East region, which have sufficient resources for this, in particular Saudi Arabia, must fight the extremist grouping "Islamic State".

Bernie Sanders supported the US sanctions against Russia in connection with the entry of the Crimea into the Russian Federation and the conflict in the east of Ukraine. Voted for helping Kiev in the amount of a billion dollars.

Joining the current presidential campaign, Sanders explained that he decided to seek presidential nomination not as an independent candidate, but as a candidate from the Democratic Party, not wanting to be a “pest”, which Ralph Nader turned out to be during the election of 2000 of the year. Sanders ’campaign headquarters hired Revolution Messaging, which is considered one of the factors contributing to Barack Obama’s success on social media in the 2008 presidential election of the year.

The greatest attention of the American population is attracted by the Sanders social program. He, for example, campaigns for free college tuition, a doubling of the minimum wage, and the creation of a universal publicly funded health care system. Without embarrassment, he uses the term “democratic socialism” to describe his platform, in which “the state reflects the interests of ordinary people, and not billionaires, as it is now.”

As an example, Sanders cites the Scandinavian countries, on whose model he would like to establish government. He refutes claims that such views are incompatible with the democratic system: “In most of these countries, turnout is much higher than in the United States. These are states with a very flourishing democracy. ”

In general, the views of Sanders coincide with the political platforms of the main social democratic and labor parties in northern Europe. But the fact that the word “socialism” itself has ceased to be a scarecrow for American society, especially young people, this is certainly news for the United States.

Noam Chomsky, a well-known left-wing political analyst and professor at the Massachusetts Institute of Technology, prefers not to use the term “democratic socialism” to define Sanders’s political views.

“I think it should rather be called a New Deal (Franklin Roosevelt) democrat, which is what socialism is now reduced to, which has departed very far from the traditional meaning of this word,” says Chomsky.

For obvious reasons, Sanders regards Hillary Clinton as his main opponent. According to him, the former US Secretary of State is too far from the needs of the average American to be an effective president. “Hillary Clinton has been a part of the political establishment for many years,” he said.

Some commentators have already noted that we cannot exclude a situation in which the Americans will eventually be asked to choose between Sanders and Trump.

This is also evident from the nervousness shown by Clinton. She prefers not to subject Bernie Sanders to direct attacks and even tries to intercept his social program, stating, for example: “I agree with Bernie. The focus should be on helping the middle class of America. And I greet him in the race. " Apparently, imperceptibly for their authorities, the American society is really ripe for serious change.

Ctrl Enter
Noticed a mistake Highlight text and press. Ctrl + Enter
We are
US presidential elections - the starting point of the "color revolution" in America?What we lost
18 comments
Information
Dear reader, to leave comments on the publication, you must to register.