"Big Two" - this is not an estimate of geography

29 September 2015
22
September 29 ends the seven-day state visit to the United States by President Xi Jinping. He started in Seattle, and will end in New York: there Comrade C will give a speech at the UN General Assembly. Before the start of negotiations with President B.H. Obama, the Chinese leader declared that relations between the two states are “at a new start”. However, the parties did not hide the existing differences. 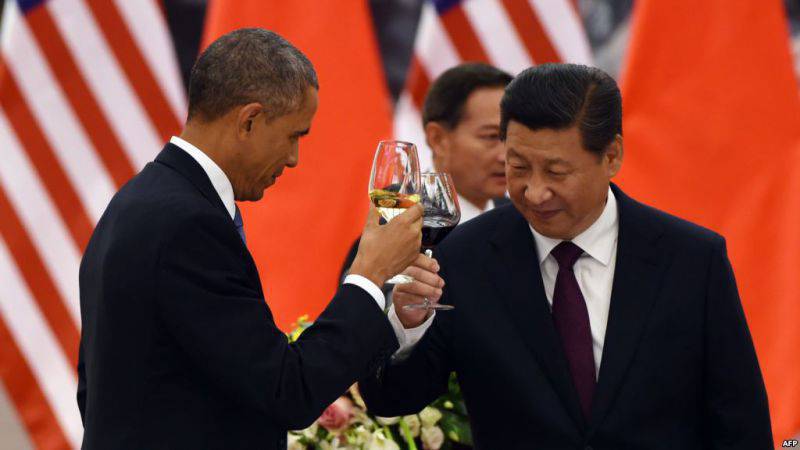 Already today it is possible to sum up the working part of the visit of the leader of the Middle Kingdom to the USA.

On September 25, the PRC Chairman was received at the White House. In honor of Comrade C, the Americans gave a salute of twenty-one guns. Xi Jinping smiled at photographers who continuously clicked shutters, and said that the relations between China and the United States were "at a new start." The colleague was supported by Mr. Obama, who said that if the two “great nations” start “working together,” then “unbeatable opportunities for shaping the image of the new century” will open up to them. (It’s hard to say what century Mr. Obama meant. The XXI century began in 2001, and before the twenty-second still live and live. Obviously, Obama learns to think in Chinese - a century to come.)

At the September 25 meeting, however, interaction issues were exposed. Two leaders did not hide political differences at all.

Obama, as always, chided Xi Jinping for violations of human rights in China. The President of the United States would very much like the world to “achieve the greatest progress”, and the “rights of all people” to be respected.

However, the topic of “human rights” for the United States, which bomb anyone who wants it and when they want it, is nothing more than ordinary talk. The Chinese, in response to various Obama and George Bush, can only smile politely. In the end, Obama does not climb with "human rights" in Saudi Arabia.

The main problem in relations between China and the United States are not the notorious “rights”, but the issue of cyber security: Washington suspects Beijing of network espionage.

No wonder a State Department man, John Kirby, recently expressed "grave concern" about China's behavior in the field of cybersecurity. Kirby made it clear that this concern is unlikely to be resolved in the short term. Obama was not silent either: he bluntly stated that because of cyber attacks, the United States could impose sanctions against China. Sanctions are generally a topic in geopolitics now fashionable, and it’s evident that they considered it a successful idea to “scare” the Celestial Empire on the eve of Comrade X's visit to the USA in the White House.

However, Comrade himself. Xi on the same day, September 25, explained that the Celestial Empire opposes the theft of secrets by cybernetic means. "China is against the theft of commercial secrets and is struggling with them," said the Chinese leader. And then he advised Americans concerned about cybersecurity ... to turn to China: to hold talks "through the available channels."

One of the achievements of the negotiations in the White House was the agreement of the two leaders on the creation of a “straight line”.

“We agreed to create a telephone negotiation mechanism for economic matters between the PRC and the United States, which will be led by Vice Premier Wang Yang and Finance Minister Jacob Liu,” the PRC Chairman said at a press conference. “They will be in close coordination on the most important economic issues.”

The question of reforming the IMF that was of no small importance for China was also touched upon.

Xi Jinping said at the press conference that the PRC and the USA agree on the issue of reforming the International Monetary Fund. “We welcome the US commitment to implement quota reform and management of the IMF,” the PRC chairman told reporters.

In addition, Comrade Xi thanked the United States for supporting the addition of the yuan to the Fund’s basket of currencies.

The most important topic was the situation in the East China and South China Seas, where China is having island disputes with its neighbors. “I repeated,” Obama said at a press conference, “that all countries should enjoy the freedom of navigation, air traffic, and unhindered trade. At the same time, I indicated that the United States will continue to float, fly and act wherever international law allows. ” Further, the owner of the White House confirmed its “concern” arising from the construction work of Beijing in the South China Sea and the “militarization of the districts”. Xi Jinping responded that the bulk works of the PRC on the Nansha Islands "are not directed against any country."

The issue of climate change on the planet was also important: China is known as one of the major industrial pollutants of the environment.

A joint statement by Comrade C and Mr. Obama on climate is a final document covering the Paris Climate Conference, developing bilateral and multilateral cooperation, etc. The text of the document states that "climate change is one of the greatest threats to humanity." China and the United States are taking a "critical role" in "repelling" this threat.

As for the plans to overcome differences, they are presented in another final document. According to the text, the United States and China "agreed to work together to resolve differences, as well as expand and deepen cooperation" in the field of "global and regional challenges", the world's nuclear security, the preservation of the oceans, etc.

In another signed document, the parties argue at length about a bright economic future. It states that the United States and China are aware of their common interest in supporting an open world economy and a stable international financial system. In addition, Washington "welcomes" a more active role of China in the international financial architecture.

As for the agreement on cyber security, the final documents of the negotiations provide for a permanent dialogue of the two states between the relevant ministries. On the part of Washington, the ministers of justice and national security will take part in the dialogue, as well as representatives of the special services. The Chinese will put the relevant interlocutors. The first dialogue will take place before the end of 2015.

About how China sees relations with the United States and other countries, told Gazeta.Ru Akio Takahara, a former diplomat, a specialist in China, a professor at the University of Tokyo.

“There is no doubt,” the expert noted, “that both sides will present this visit as successful. The economy is at the core of the US-China relationship, and therefore Xi Jinping began his visit to Seattle, where he met with representatives of American business. At the same time, both countries need to contain aspects of rivalry in relations, first of all I mean the situation in the South China Sea. But this is only one aspect. There are others: problems of espionage, cyber attacks, situations with military aircraft of two countries, which sometimes make a dangerous rapprochement with each other. And then the question is how they will make the existing mechanisms work or find new ones. At the same time, of course, they will try to demonstrate to the world that they are working to overcome their differences. ” In addition, "given that today's events demonstrate that the world order is not in order, both sides, of course, want to draw attention to the fact that there is a meeting between the superpower and the first candidate for the superpower - China."

According to analyst Gevorg Mirzayan ("Expert"), Xi Jinping's visit to the United States "is surrounded by a series of myths and assumptions."

What are these myths? According to the analyst, "one of the misconceptions" is the assumption of the "intentions" of the United States and the People's Republic of China to agree on the principles of joint management of the world.

Mirzayan believes that it is not necessary to talk about any “big two”: the United States will not offer China to enter this “informal structure”, since this will mean delegating to China some of the instruments of global governance. In addition, Beijing does not really need such a proposal: to enter the “two” means linking the policy to the unpopular in many countries of the United States and withdrawing from the group of developing countries, “where is China” (it’s not by chance that Beijing refuses to enter the G8, is comfortable feeling in the big twenty). Finally, China is not smiling at all to bear responsibility for “the unbalancing of the world system that is happening now.”

And here’s another myth: Xi Jinping’s state visit to the United States is not a blow to Russian-Chinese relations. This version of the analyst considers "doubtful." Relations with Moscow and Washington for China complement each other. America gives the market, financial interconnections, but also brings security threats to China, and Russia is the defense against this threat. “The close partnership with Moscow,” writes Mirzayan, “guarantees China a calm rear in the northwest, energy supplies with minimal or even zero transit risks, as well as the smooth operation of future trade routes between China on the one hand and the European Union countries on the other. . Therefore, sacrificing some relationship for the sake of others will definitely not be China. ”

“The real purpose of the visit and negotiations,” the analyst summarizes, “is that the parties will try to agree not to create problems for each other at an extremely inappropriate time to solve these problems.”

As a result, the two states, we will add in conclusion, are more likely looking for points of contact and trying to do everything possible in order not to sharpen the existing differences. That is why the topic of existing differences was relatively "quiet", and on cybersecurity and the problem of climate change on the planet even certain agreements were reached. At the same time, Washington made it clear that the behavior of the Celestial Empire in the seas does not cause joy at the White House. In short, disagreements remained disagreements, cooperation remained cooperation. At this stage, a supporter of “human rights” Obama, who has remained on the throne for less than a year and a half, is trying to preserve relations as they are: when the situation in the world becomes complicated, maintaining at least some order is an achievement. Xi Jinping doesn’t need shocks and complications either: there are enough problems in China now.

We are in Yandex Zen
Results of the week. "Aria of the Moscow Guest"
Preliminary evaluation of the prototype of the unobtrusive Chinese fighter Chengdu J-XX [J-20]
22 comments
Information
Dear reader, to leave comments on the publication, you must to register.