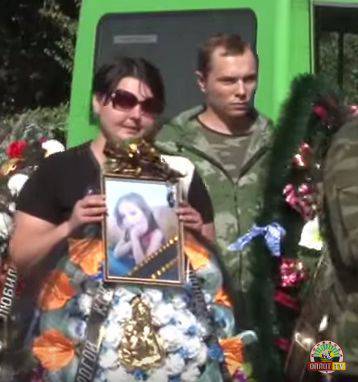 On September 26, the head of the Donetsk People's Republic, Alexander Zakharchenko, declared a mourning day for 9-year-old Ksenia Ivakhno. This girl died in a tragic accident on tank competitions at the training ground near Torez. At the Donetsk Opera and Ballet Theater, where a new theatrical season has opened, the concert began with a minute of silence for the dead child.


Condolences in connection with the incident came from the neighboring Lugansk People's Republic. The head of the LNR, Igor Plotnitsky, said: "We are shocked to learn about the terrorist attack in Torez, the child of which fell victim ... We, like you, lost hundreds of relatives and close people to this damned war."

Head of the DPR Alexander Zakharchenko personally took part in the funeral of a child in the city of Shakhtersk. There many people came to say goodbye to the girl. Her street was literally littered with flowers. Relatives say that Ksyusha was very much waiting for this tank biathlon, which perceived him as the upcoming holiday. Of course, no one could have imagined that it would end for her in this way.

Zakharchenko said that the perpetrators of the incident will answer for their actions. Responsibility will also be borne by those who could not, by their negligence, prevent tragedy. “We will do everything so that this does not happen again,” he said.

In addition, the Head of the Republic personally visited the relatives of the deceased child.

The main version of the incident in the DPR is considered a terrorist attack. The General Prosecutor’s Office of the Republic opened a criminal case under the article “Terrorist Act”. According to investigators, an explosive device weighing 200 grams in TNT equivalent was located in the combat compartment of the Strela-10 installation, which was set up for inspection by visitors.

According to the Chief Military Prosecutor of the DPR, Vasily Bairachny, the one who carried out the terrorist act understood that it would be difficult to detect an explosive device in the place where it was installed. He acted clearly a professional.

Bairachny added that 24 and 25 of September were inspected by specialists - military, chemists, explosives. “All the forces in the Donetsk People’s Republic are thrown into the search for terrorists,” he said.

In addition to the death of Xenia, the explosion led to the fact that three people were injured - one child and two adults. Republican Emergencies Minister Alexei Kostrubitsky said: “Three people went to the hospital, including one child. He has 60 percent body burns. The child is now at the Institute of Emergency Surgery. Husak. His condition is stable, doctors work. ”

The injured child is seven-year-old Artem Malyk. He had a complicated operation. The well-known Doctor Liza, a member of the Presidential Council for the Development of Civil Society and Human Rights, said that Artyom received high-quality medical care and now there is no need to transport him to Russia. She added that she was ready to make every effort to help the boy.

Meanwhile, the Deputy Commander of the Corps of the Ministry of Defense of the DPR, Eduard Basurin, made a statement that the tank competitions will continue on September 28 and 29. The authorities of the Republic promise to strengthen security measures at the site.

Many in the Republic are now arguing about whether to continue tank biathlon, which was suspended for such tragic circumstances. Many consider it sacrilegious and treat contests simply as an ordinary show, which, in their opinion, should have been canceled altogether.

But there is another point of view. It lies in the fact that you need to show those who are guilty of a crime: it is impossible to break the NPT. That the organizers of a cowardly terrorist attack against civilians will not intimidate either the military or civilians.

I personally feel closer to the second point of view. After I personally saw a lot of the terrible consequences of the terrorist attacks in Syria, I believe that in no case should you retreat before those who create this. Otherwise, it will encourage terrorists to continue to commit bloody crimes: they will believe that they can manage events by carrying out another atrocity. It is important to let them understand something completely different: never will terrorists determine the agenda. Unfortunately, they can kill, but now it’s not for them to decide.