Together with Russia against the pocket scorpion?

28 September 2015
39
Last saturday british tv channel Sky News and the British edition Sunday Express presented the results of public opinion polls on whether the British support a full-scale military operation (including the land segment) in the Middle East (Iraq, Syria) to destroy the Islamic State terrorist group - operations involving the British military contingent. It was noteworthy that before conducting such surveys, the British media, without any hysteria, presented information that the Russian president was calling on Western countries to come out in a united front against the increasing terrorist threat. At the same time, Vladimir Putin’s quotation was presented that one of the tasks of the ISIL militants is to discredit one of the leading world religions - traditional Islam - to set off representatives of a single confession and countries where a considerable number of Muslims live.


Survey results are as follows:

Sky News. Nearly three-quarters of the respondents (74%) were in favor of such an operation, while they said that Britain should limit its participation in the use of the royal air force;

An eye-catching collage published in the Sunday Express (GETTY): 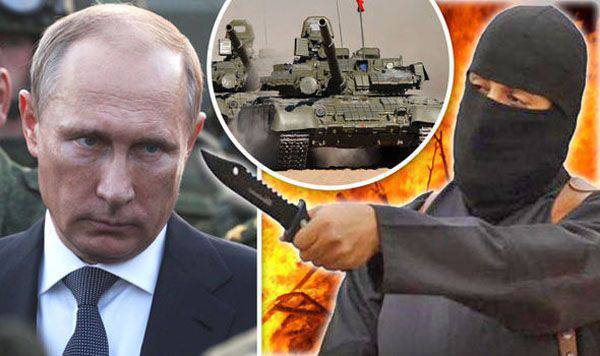 Based on these results, it can be stated that the information field in the West is quite clearly preparing for the inevitable full-scale operation against ISIS. They say poll results also that the overwhelming majority of the same British “Islamic state” consider the interests of the state where they live, but still (after numerous real fiasco in Libya, Iraq, Afghanistan) are threatened to send their military personnel.

Obviously, the information field that is being formed in the Western media (and the need to create a united front to combat ISIS is not only spoken in Britain) suggests that the authorities of the “exclusive” state and its vassals (or politically correct - allies) are thinking hard over the proposal of Russia. After all, if we completely ignore the initiative of Vladimir Putin, then in the future it will be hardly possible to objectively explain to our citizens (subjects) why the “bloody tyrant from the Kremlin” takes real actions aimed at fighting international terrorism, and for “knights in white robes from London and Washington, "further verbal diarrhea does not go. Moreover, in the West it is well known that Russia has a victory over a large-scale terrorist conglomerate in the North Caucasus (in the same Chechnya), and that many thousands of armed gangs operating in the North Caucasus region, today, short-lived leaders of which do not have time to grow a centimeter of a beard until the moment of their destruction by Russian security forces. It is also known about Russia's cutting off the main channels for financing the terrorist rabble in the south of the country. In general, the average western man in the street (even under the condition of tons of dirt that “democratic” media is pouring onto the Russian Federation) is not an idiot, so as not to be able and reason to compare the fight against terrorism to Russia and the “fight” against terrorism of Britain and the United States ... They compare - they understand ...

This fact leads the powers that be in the West to the need not to miss the moment. The main idea, which, by definition, does not give rest to the same Obama, is connected with this: what if Putin and Asad joint actions really crush “our charm” - the “Islamic state”? .. And what if someone else has a desire for it is to award Russia, horror, the Nobel Peace Prize ... In general, the West decided to act, and the first call was a meeting of the US President with the Russian President to be held at the UN, although a few months ago Washington issued its ridiculous verdict: Putin is isolated, lead talks talk with poo Tyne is taboo! They literally swore on the blood that “Putin’s isolation is an objective reality,” and that “the economy is in tatters” ... Well, how can I forget this? ..

So, Putin’s puzzle arises before the West:

support Putin’s proposal to create a united front against LIH and other terrorist groups in the Middle East means signing his own failure on “isolating Russia” and actually recognizing Russia as one of the poles of the emerging new world;

not support - to lose support even among those who firmly believe in the infallibility of "knights in white robes."

We should not forget that before the presidential elections in the United States there is just over a year, and if the representative of the Democratic Party is still going to cling to the White House for the period 2016-2020, then the current main democrat, whether he wants to or not, will have to resort to real action against ISIS. Moreover, Obama recently hinted (yes, not someone, but a representative (albeit former) of the Nobel Committee) that the presentation of the peace prize (“in advance”) was a mistake ... And now Obama and his Democratic Party need to take action , to prove the “inerrancy” of the choice of Nobel in 2009 year ...

But the main snag is that ISIS is the very “pocket scorpion of the West” that Bashar Asad talked about. And how to decide to crush a creature that, although it can sting its own master, but the main goal for which the aim is to sting others (first of all Asad)? ..

This situation is somewhat similar to the situation of the sample of the 40s of the last century, when the same USA and Britain, previously engaged in significant sponsorship of the NSDAP regime in Germany, were suddenly forced to become allies of the USSR in World War II. At the same time, the real entry of the Allies into the war was delayed as much as it was possible at all. As a result, as you know, the Second Front was opened only after the Red Army went beyond the borders of the USSR for the liberation of Europe. And after before historical The West presented the prospect of recognizing the USSR as virtually the only real winner in the war against Nazism and fascism, with all the ensuing prospects for the unlimited influence of the Soviet Union in Europe. Such prospects then spurred Roosevelt and Churchill, as they say, to actively engage in the process. They joined in - and on a par with the USSR they were recognized as winners, "staking out" their sphere of influence on the continent.

With all the obvious disgust that the West is experiencing towards a strong Russia, today the United States and Britain are left with virtually the only opportunity not to be left out in the Middle East, and Russia’s offer to support. If it’s difficult for Washington and London to attack their throats with their own song, then as an example they can easily use the experience of Roosevelt and Churchill - to open "their" (second) front, and to open so that it will be a front really aimed at fighting ISIS, and not on the continuation of armed intrigue against the current Syrian president. Or the leadership of Britain and the United States of the mid-40-ies of the XX century was significantly more reasonable than its current representatives? ..