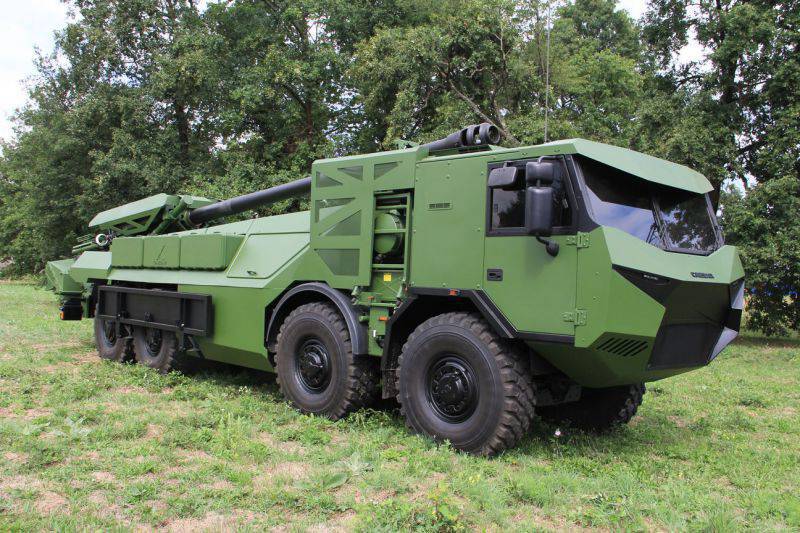 The last few years in the defense sector did not have enough of these new products, and therefore visitors to the DSEi exhibition were pleased to see that some companies still have gunpowder and are trying to invest in large projects.

One such project is the Caesar 8x8 self-propelled howitzer, presented as a test model. Nexter started this project only at the beginning of this year. The reason for this is that the Caesar concept needed to be freed from the strong shackles of "compatibility with C-130." Indeed, while some potential buyers admired mobile performance Caesar howitzers on the chassis Unimog 6x6 or Renault 6x6, others regretted that the compatibility with the C-130 transport aircraft imposes severe restrictions on semiautomatic loading, an additional quantity of shells and charges and possibly additional cabin reservations . 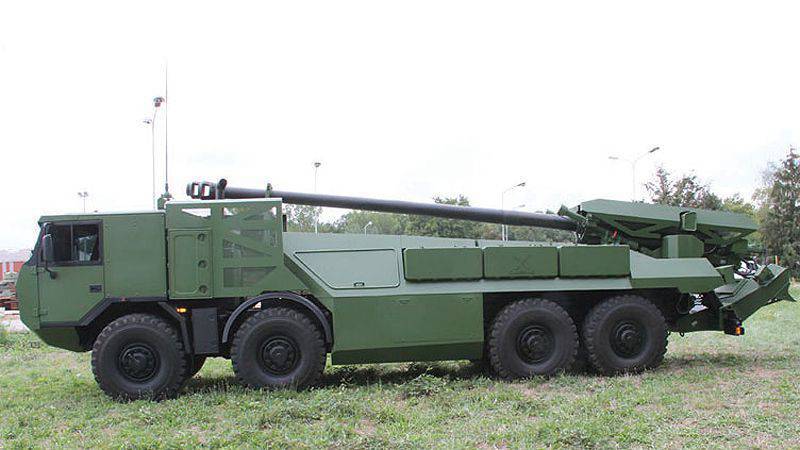 The new Caesar 8x8 system is clearly aimed at operators for whom the C-130 transportability limits operational flexibility and does not fully adapt it to customer requirements. It may attract interest and some existing operators Caesar

Increased maneuverability, power reserve and large dimensions (but without excessive gigantism) made Nexter turn to the Czech company Tatra. These two companies have fairly strong business connections, as the Czech manufacturer has already once been selected as a landing gear supplier for the Titus high-mobility armored personnel carrier developed by the French Nexter. Tatra is also a regular winner of some of the toughest off-road rallies and races around the world, including the original Paris-Dakar race. High throughput is realized mainly due to the independent suspension with swinging bridges (the so-called ridge frame), connected to pneumatic shock absorbers, which allows to obtain a phenomenal wheel travel and constant contact with the ground, and hence optimal grip. 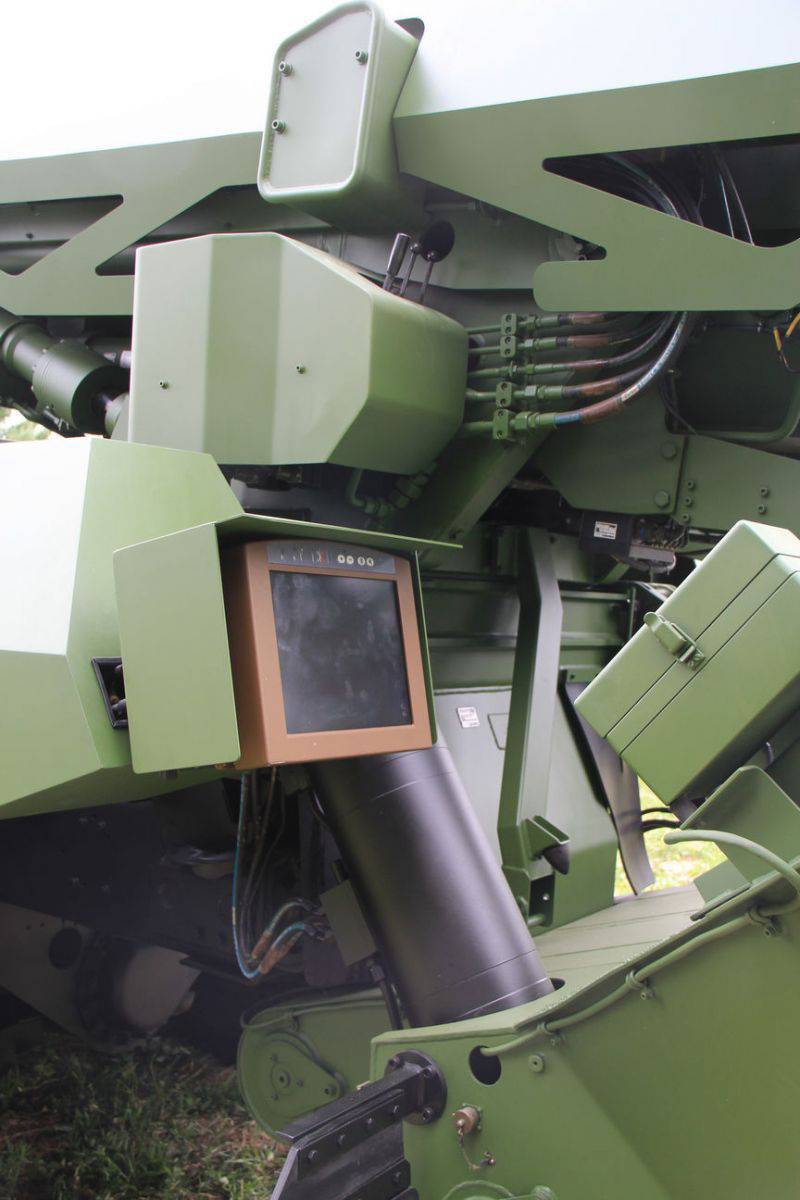 The self-propelled howitzer Caesar 6x6 in its current form has confirmed its reputation in the Middle East and Africa during the operation "Serval". All of its equipment, including guidance, navigation, fire control and radar measurements of the initial velocity, is stored on the 8x8 chassis.

Unlike other competing 155-mm wheel howitzers, the Caesar 8x8 cannon fires forward (the company does not sound in azimuth angles) and retains the old 6x6 configuration with rear stabilizer legs. For direct fire, the 155 / 52 can be lowered onto the cab. However, in addition to this, the Tatra 8x8 chassis allows you to implement many options that can be requested by customers, for example, various levels of automatic loader and cab protection up to Levels 2A or 2B. The chassis can be modified to carry 40 shots. In order to increase the number of customers, the T815 chassis itself already comes with the ability to install various power units. In addition to the standard diesel engine with air cooling Tatra power 410 hp on the chassis, you can install engines from MAN, Sizu and Renault / Volvo. 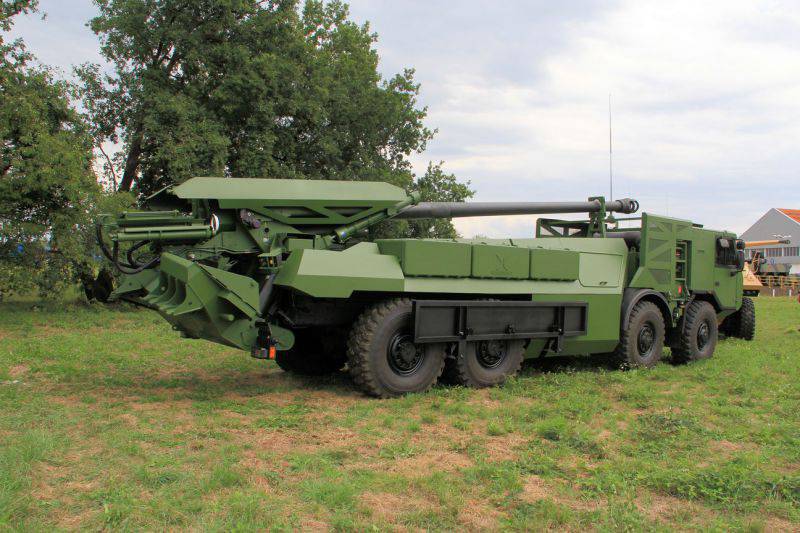 As already mentioned, the machine presented at the DSEi exhibition is the first experimental model of a howitzer installed on the chassis; it is not even a prototype. At the Eurosatory exhibition (to which the company has already collected a sufficient number of questionnaires from potential customers), the car had an elongated cabin (on the first roll-out of a regular, civilian standard) in order to accommodate five crew members. Depending on the options that the customer chooses, the howitzer in the 8x8 configuration will weigh from 26 to 30,5 tons.

Nexter presented one more novelty at the exhibition - a new version of the Vehicule Blinde de Combat d'Infanterie or VBCI-2. The VBCI vehicles of the French army have seen difficult times in Afghanistan and more recently in Mali, where, to the great satisfaction of their passengers, they saved their lives more than once. VBCI was mainly created in accordance with the requirements of the French army, but was also tested in several countries in the harsh conditions of extremely hot and cold climates. Currently, some of the French Army’s 630 machines VBCI are being upgraded, with many improvements that increase the total weight to 32 tons. But the case remains the same. 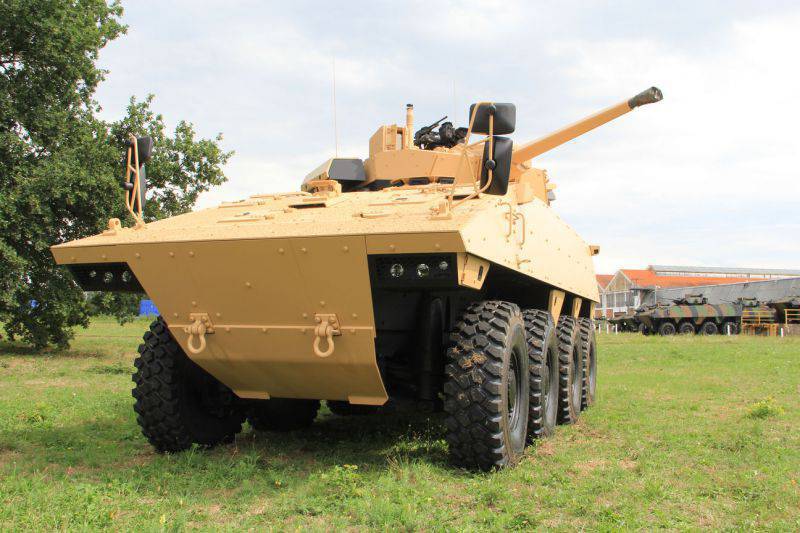 Many of these improvements are actually aimed at giving the car a second wind in the export market. A large number of improvements actually allows you to talk about a completely new designation of the machine, but despite the fact that only the basic welded body of aluminum armor was retained, it was decided to leave the name that had already become famous and give the car the designation VBCI-2.

In fact, the revision of the car went in all directions. Improvements have been made to payload, mobility, firepower, windics, operational reliability, ergonomics and functional flexibility; the list goes on and on. Visually, what distinguishes the new version from the original VBCI is the design of the tower. Its front end was heavily sloped back, because the driver's seat was significantly shifted back due to the installation of additional electronics for driving. Then the much larger 16.00R20 wheels immediately strike the eye, whose 1,343 external diameter meter “fills wheel arches better” (there is nothing free in this world and each wheel (without a rim) weighs almost 112 kg, characteristics of hydraulic shock absorbers also had to be improved). However, three types of tires are available, which makes it possible to better match the terrain regarding the clutch. 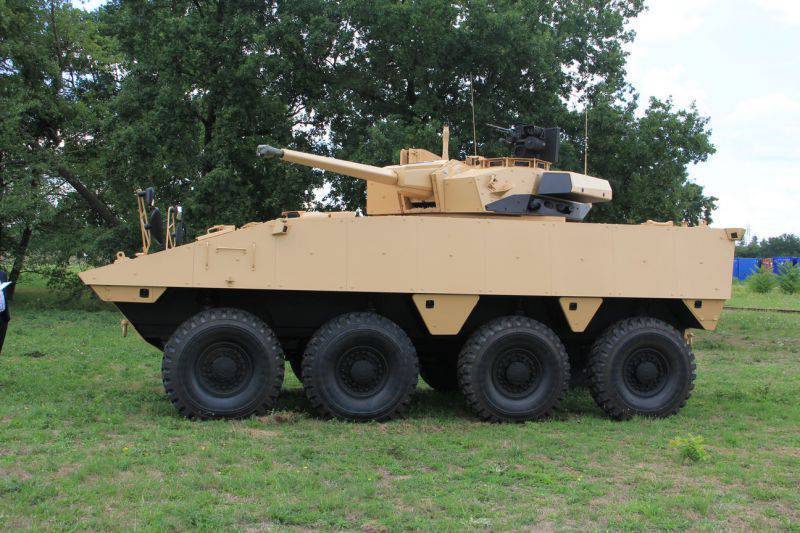 The T40 CTA turret VBCI-2 has not only a cannon firing telescopic 40-mm ammunition, but also a remote-controlled combat module and, if necessary, MMP missile launchers on each side of the turret. From this side you can clearly see the new front sloping section of the tower.

Let's pay attention to the big difference with the former option between the wheels, especially between the two central bridges. A really large armored gondola under the hull, removed and replaced with a noticeably thicker armored bottom. The bottom is flat (as opposed to V-shaped). There are no details on the bottom design, but, according to Nexter engineers, “tests showed that the hull survived not only the detonation of a standard 10 kg mine, but also a detonation on a charge of more 20%. Officially, mine protection reaches the level of L4A-4B "and above", which is possible and applies to the mentioned 20%.

According to the company, the car has a ballistic protection L5 (30-mm armor-piercing sabot) with a potential increase to the level of L6. It also provides for the possibility of integrating active protection, and according to Nexter representatives, work is underway on several solutions. 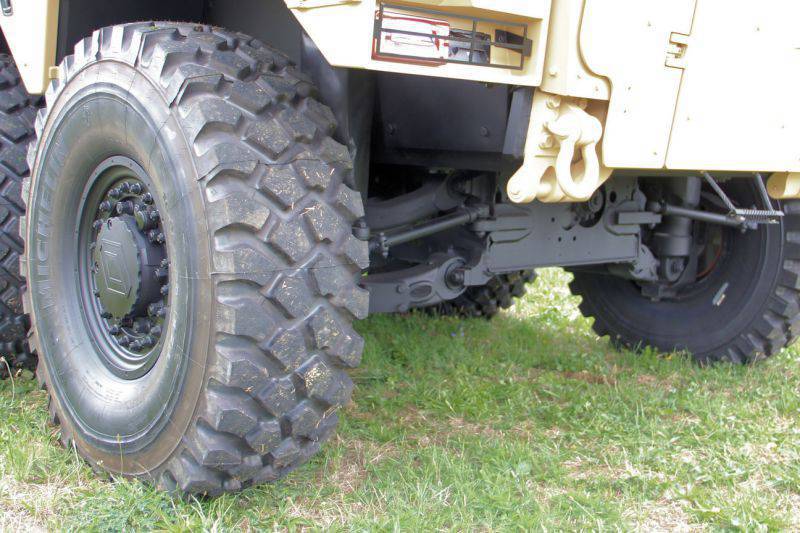 The photo shows the rear steering axle, which allows you to reduce the turning radius to 17 meters

Back in the back of the car before you get into the troop compartment. A glance below the aft ramp reveals another significant change. The suspension system manufactured by Texelis and the rear axle, but already controlled, which made it possible to reduce the turning radius of the car to 17 meters. Indeed, one of the drawbacks of wheeled vehicles is that the thicker the steering wheel is, the less it turns before it touches the hull. In order to improve the situation, the new version is also “controlled a la tank” or almost by locking the wheels of one side and rotating the wheels of the other side the car turns around its axis.

The presence of the T40 tower basket CTA does not allow a direct visual comparison of the new configurations with the old one. However, a new type of splinterproof and other measures allowed Nexter to increase its total internal volume to 13 м3. New seats with other attachment points not only increase the level of protection against high vertical acceleration, but also provide better comfort and optimum stretching of the legs. 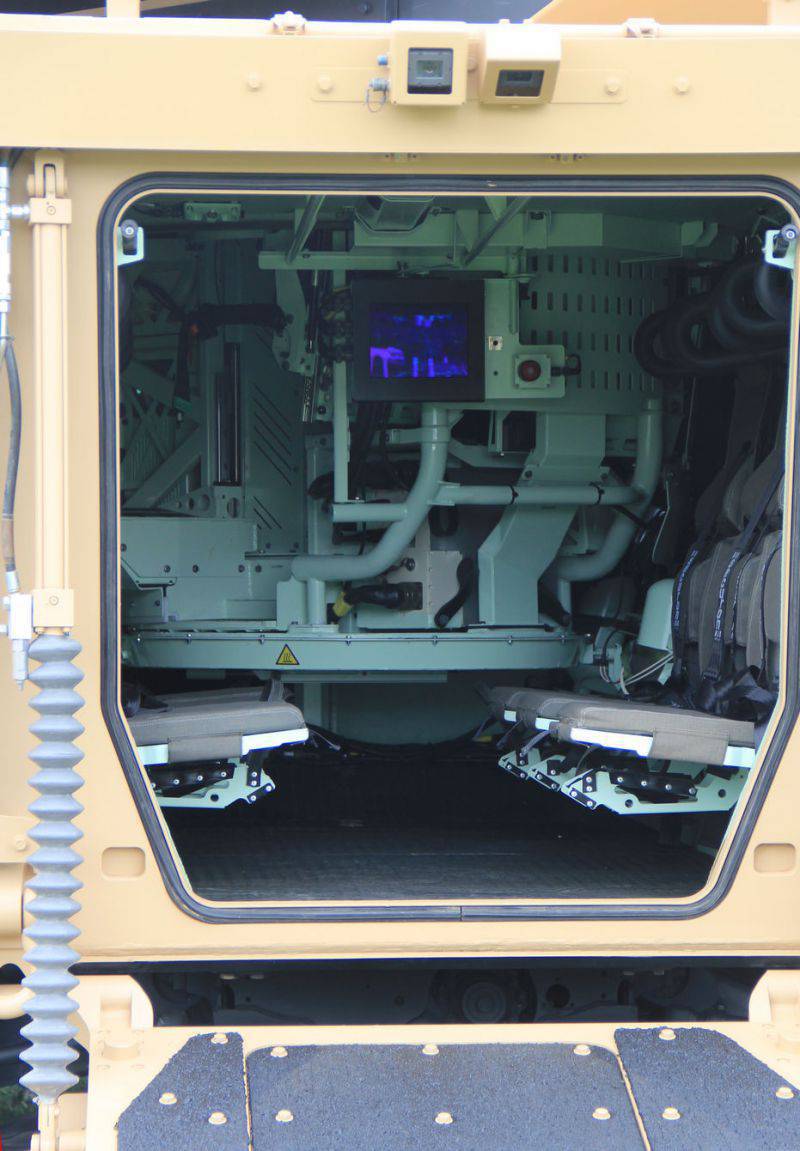 The troop compartment has a large overall height and more ergonomic and safe seats are installed in it. The external environment is displayed on the display screen (visible in the back of the car), which is controlled by the Nexter Crew Share system. Along the perimeter of the car, we see small cameras (two are installed above the doorway). These two cameras actually serve as rear-view mirrors for the driver.

The multi-function display in the aft compartment is proof of the presence of several outdoor video cameras, and the Nexter high-performance Crew Share wind kit is installed in the car. A set of wind sensors (vehicle electronics) is actually divided into two subsystems, one based on eight situational awareness cameras, distributing the picture among crew members, and the second serves everything related to mobility (power unit, inertial navigation and power management). Also, all information from optoelectronic systems and voice data goes directly to the Crew Share network.

In addition to the fact that the driver’s seat is shifted back, it is completely updated and includes a thermal imaging camera with an image displayed on the driver’s multifunctional display. Also, the driver has a digital periscope.

The increase in weight to 32 tons, the increase in power of the air conditioning system (tested at 50 ° C), the increase in payload to 13 tons and the additional power consumption did not go unnoticed and for this we had to seriously add engine power. By car VBCI-2 installed diesel engine Volvo D13 power 600 hp coupled with a seven-speed automatic transmission ZF. It is worth noting that the engine, transmission and cooling system are made in a single unit.