We talked about swords and daggers, armor for the torso, and now it's time to get acquainted with the "armor for the head." Minoan and early Achaean helmets appeared in the Aegean Sea basin a very long time ago, in the 5000-1500 years. BC. Well, we can judge this on the basis of the findings of ceramics, frescoes, sculptures and other artifacts.

So, on stone amulets from Sesklo, dated between 5300 - 4500. BC Oe., we already see something like a helmet, made of leather and decorated with long horns. In the early Cycladic culture dating from the period 3200 - 2800. BC, you can find their images. And it seems that the conical helmet is presented in one of the symbols of the famous and still undeciphered Phaistos disk (2000 - 1700 BC). Heinrich Schliemann also found fragments of a helmet — the crest and the holder of the crest, but he did not find the surviving helmet. 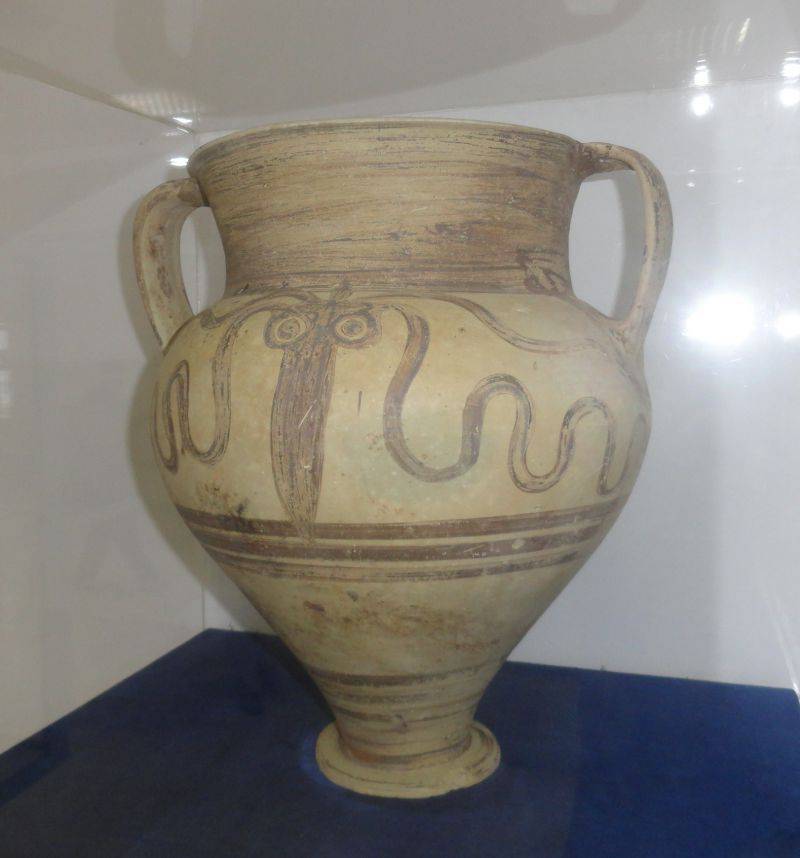 Pitcher from the island of Cyprus. The peculiarity of the Cretan-Mycenaean culture of the Aegean Sea was the image on ceramics of fish and, in particular, octopus and cuttlefish. Archaeological Museum of Larnaca.

The Iliad mentions a helmet made of boar tusks, which was initially perceived as nonsense, although the description was detailed there. However, the boar tusks used as plates on the helmet (around 2000 BC) were found in Mariupol in Ukraine. This once again speaks in favor of the migration of the ancient Dorian tribes from the central and northern regions of Europe to Greece in 2000 - 1800. BC. These newcomers spread widely throughout mainland Greece and gradually mingled with the population that previously lived here. 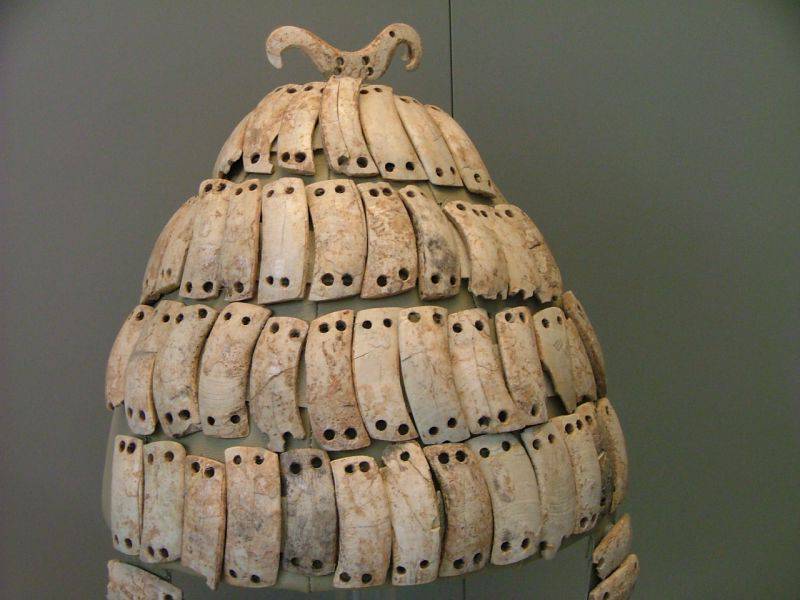 “Kabany Helmet” from the tomb No.515 in Mycenae. National Archaeological Museum in Athens.

How was the typical “boar's hat” of that time arranged? It is very simple: plates were cut out from the canines of the boar, fitted one to another and holes were drilled into them. The base of the helmet was a cap in the form of a cone or hemisphere, made of leather or felt. Bone plates were sewn on it in a circle, row by row, moreover, the directions of their bending were usually looked in different directions. The upper plates had a triangular shape, on top of the helmet was a round "button" made of ivory or bronze, or the comb holders were placed there.

Boar tusks were used because of the ease of processing. On the one hand, they are well cracked along. On the other hand, their external surface is very hard (unlike ivory). In the Iliad, Odyssey, the king of a small island, wore such a helmet. Homer gave a surprisingly accurate description of the helmets of that era:
I also gave a shield; on the head of the hero of the skin of ox
The helmet he wore, but without a comb, without plaques, called flat,
To whom the brow covers a blooming youth.
Chief Merion offered Odyssey and his bow and quiver,
He also gave the sword; on the same head Laertida put on a hero
Leather helmet; confused inside often by straps,
He was tight, and sticking out of the helmet outside.
White boar fangs, and here and there mourning
In the slender, beautiful ranks; in the middle, he was hit with felt.
This helmet - antiquity from the walls of Eleon was kidnapped by Autolycus ... 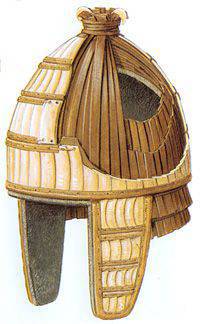 Reconstruction of the "boar helmet" made by Peter Connolly.

A complex helmet required from twenty to forty boars, but boars at that time, apparently, were not a problem, they gave the skin, fangs, and meat!
A composite boar tusk helmet was also found in the tomb no. XXUMX in Dendra (see part two). Moreover, it is surprising that the armor in this burial is metallic, but for some reason the helmet is bone! Didn’t the owner of this armor have enough (what, what did they pay for it?) To buy a bronze helmet? 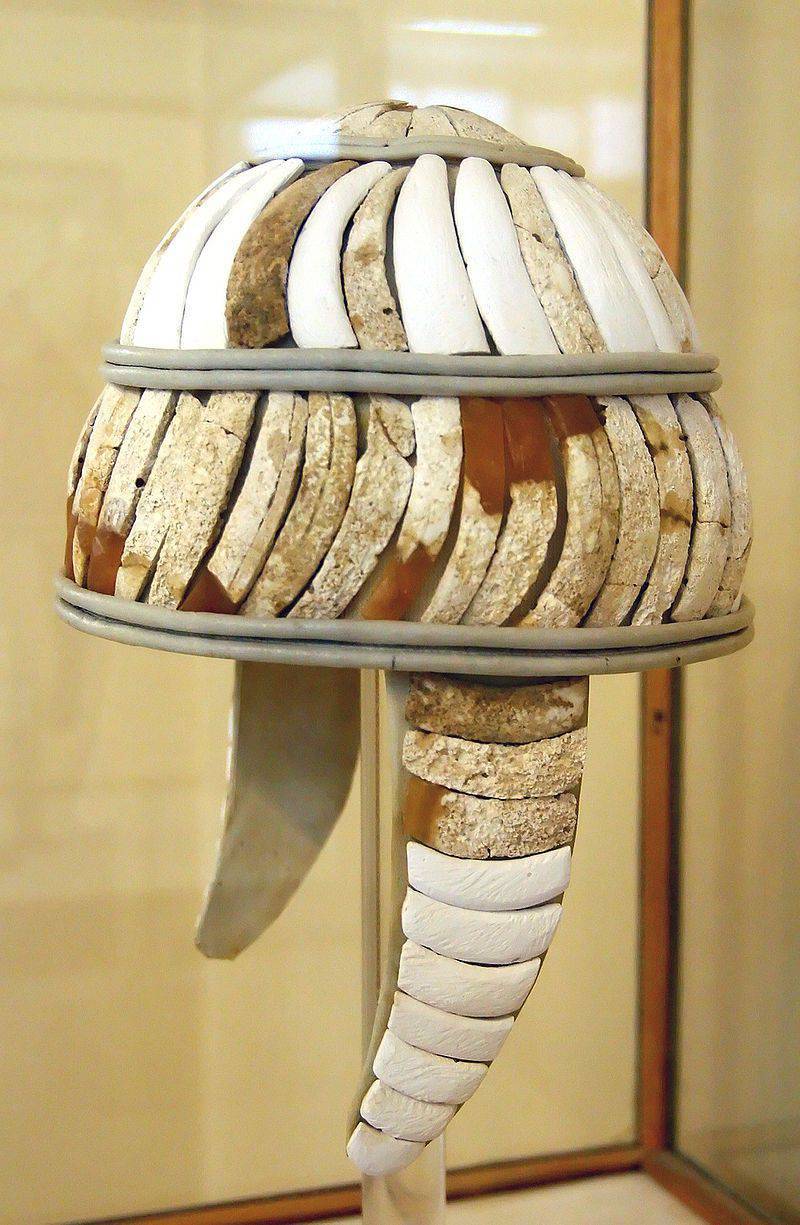 Another very common type of helmet, most likely made of leather or felt, was a cap with metal discs sewn onto it. Or on the contrary - it is a metal helmet with bumps made for beauty. 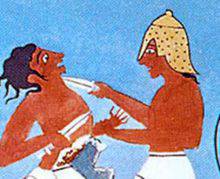 Fresco from the palace in Pylos. And the question is: what kind of helmet is depicted on it? Bronze with "cones" (why are they?). With holes for airing (such unknown!) Or is it something else?

They took care of beauty at that time very much, because, judging by the frescoes and the images on the vases, the helmets at the same time were combs with feathers or horse tails, and in addition also horns! And now: let's think about the conditions under which it could be, and under what conditions it could not. Vikings had no horns on their helmets, as a blow by the sword on the strong horns on the helmet could have broken the warrior’s neck. The knights on their helmets had anything, but from papier-mâché, “boiled leather”, light wood and dyed plaster. The samurai of Japan had metal horns on their helmets, but they were arranged in such a way that a blow to the warrior’s sword was not dangerous for them.

Therefore, it is easiest to recognize that the ancient Mykene simply were not cut with swords (and they could not be cut with rapier swords!), And then strong enough horns on helmets didn’t interfere with their fight. But as soon as swords appeared for chopping blows, all the horns were left mostly with a horse's tail and a crest on the top of the helmet! 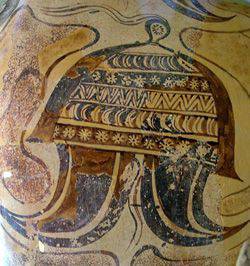 Helmet with a vase from Katsamba. Crete (around 1500 BC).

The horns of the helmets of this period were usually made of boar tusks, deer antlers, ivory, and also of metal. Two ivory artifacts in the form of ram horns were found in one of the graves in Mycenae (1550 BC).

Achaean helmets 1500 - 1300 BC. in many ways similar to their earlier patterns, that is, the process of change was very slow. The typical remains of a helmet made of leather or felt, trimmed with boar tusks, with necklaces and various decorations. Most often these are horns, which can be two, and one - in front, and three - sticking out in different directions. Bronze helmets of this time are also known, in particular, this is a conical bronze helmet with a height of 18,1 cm (XIV - XIII centuries. BC. E.) 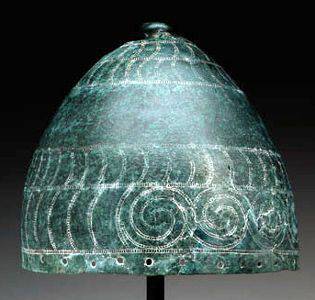 Helmet height 18,1 cm (XIV - XIII centuries. BC. E.). Its decoration shows that the memory of helmets made from boar tusks was still preserved, revered, so that the creators of metal helmets decorated them with a characteristic pattern.

Outside mainland Greece and the islands of the Aegean Sea, Achaean warriors wearing helmets made of boar tusks can be seen on the Egyptian papyrus from Tel el-Amarna (1350 BC). Some of the warriors are depicted in it in conical pale yellow helmets that are very similar. on pictures of similar helmets on Mycenaean vases. A piece of boar tusks with perforations for attaching it to a leather base, found during excavations in the area of ​​Per-Ramses - the capital of Ramses the Great in the eastern delta, confirms that such helmets were worn in the territory of Ancient Egypt. Obviously, they were worn by Achaean mercenary warriors. The same fangs were found in Serbia (XIV - XIII centuries BC), and on the island of Cyprus.

That is, for this period, it is possible to consider the widest distribution of “boar helmets” and a few less - metal - bronze ones. Although archaeologists have found helmets from this period, particularly in Crete.

“Late helmets”, that is, relating to the times of the Trojan War itself (1300 - 1100 BC), are the most diverse. First of all, these are again all the same helmets made from boar tusks, to which bronze details began to be added. And there is reason to believe that even in the VIII century. BC. they were still used, although they were already rare at that time. 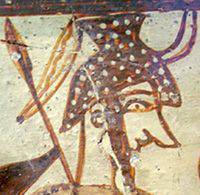 Late Achaean helmet with "Vaz warriors" from Mycenae (around 1200 BC).

A conical horned helmet without faceplates is visible on a statue from Engomi from the island of Cyprus (near 1200 BC). Mercenaries shardan Egyptian pharaohs almost all portrayed in Egyptian frescoes in horned helmets.

We have reached the image of "furry" helmets, apparently made from hairy hides. It could be an ordinary hemispherical cap, covered with such a skin on top, so the authors of drawings of people wearing such helmets depicted them with a porcupine-like head. However, it is believed that it could be just long hair, picked up by a bronze or leather hoop at the level of the temples. There are a lot of images of such helmets, which, firstly, speaks about their popularity, and secondly, if this is what we think that the “armies” of this era have become more crowded and boar tusks for everyone (like and bronze) ceased to miss! Some scientists also suggested that such helmets could have been made from hedgehog skin!

However, the very sketchy style of the then artists does not allow for the detailed identification of these helmets, which leaves room for a variety of hypothetical and speculative fabrications. 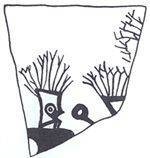 "Helmet with thickets on the head" on a piece of ceramics.

Judging by the images and, above all, Egyptian frescoes, tiara helmets or tiara diadems became very popular at that time. Apparently, this again was some kind of “cap” made of leather or felt, on the edge of which a wide metal band was fastened, closed in an oval in the shape of the head of the helmet's owner. That is, if you look at it from the front or from behind, you could assume that he had a cylindrical “bucket” on his head. And just by looking from above, it was possible to determine that in fact it is not. 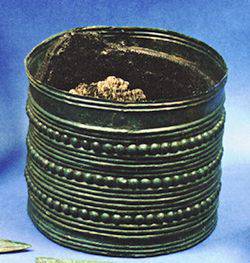 The remains of such a helmet were found in Crete (about 1200 BC). Another such helmet was dug by Professor Ioannis Moscos and wrote that it has a cylindrical shape with an oval cross-section and straight sides. Its height is 15,8 cm, width 18,7 - 19,1 cm, and length is 23 - 23.6 cm. The surface is beautifully decorated with bronze stripes consisting of horizontal edges alternating with single horizontal rows of decorative rivets. Inside, judging by the drawings, there was a “hedgehog” made of horsehair, feathers, and then even a real tiara of ... twigs with leaves or flowers ?!

A fine example of Achaean bronze helmets was found in tomb XXVIII from Tiryns (about 1060 BC). This sample consists of four elements of conical shape and two long headbands of average thickness of about 1 mm. All elements of this helmet have small holes around the edges, used to attach the lining to its inner surface. 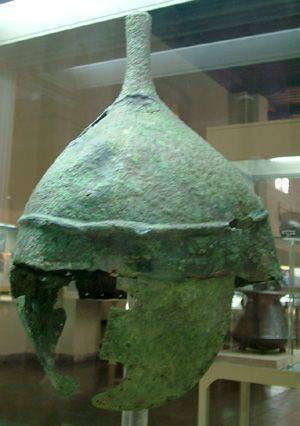 Simple bronze helmet with horsehair tube. Cyprus (end of the 7th century BC).

Simple conical helmets were largely used at the end of the Achaean period. So in the Achaean crater from Cyprus, two warriors on a chariot are clearly wearing conical helmets, although due to stylization no other elements can be identified. This crater testifies that in some cases (more often in non-combat situations) swords were worn behind their backs at that time.

Ctrl Enter
Noticed oshЫbku Highlight text and press. Ctrl + Enter
We are
Once again on the issue of reconstructing the weapons of the era of the Trojan War. Warriors in armor and helmets (part 12)Weapons and armor of soldiers of the Trojan War. Swords and daggers (part one)
Military Reviewin Yandex News
Military Reviewin Google News
61 comment
Information
Dear reader, to leave comments on the publication, you must to register.