24 September 2015
112
Whoever throws a stone into the past, the future will shoot from a cannon. And whether it was not mentioned at the Faculty of Administrative Law at the Olsztyn Institute of Hydraulic Engineering of the Gdansk University of Poland, whether student Kazimierz Keido at lectures on stories he was picking his nose and thinking that a raven was behind an institute window — in general, taking the post of burgomaster of the small town of Penenzhno, this man did something that no representative of the local authorities could afford to do before him.


56-year-old Keido sanctioned the dismantling of the monument to the Soviet general Ivan Chernyakhovsky - a man with the active participation of which Poland was liberated from the Nazi occupation, and later - after the death of the general - also grew into East Prussian territories. 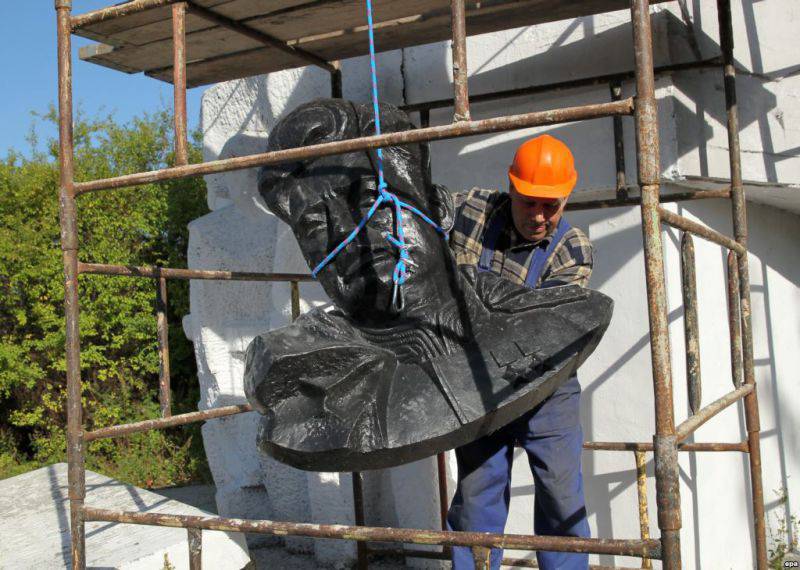 A peculiar feature is that the very Penenzhno, in which Mr. Keido is burying, historically is not at all Penenzhno, but East Prussia Melzak, who became part of Poland after the defeat of Hitler Germany by the Red Army.

Ironically - if it were not for General Chernyakhovsky and not the fighters of the 3 of the Belorussian Front, then Mr. Keido would in principle have no place to “govern” - well, there wouldn’t be such a city as Penenzhno on the map of Poland ... Although there is a high probability and the fact that if it were not for Ivan Chernyakhovsky (in particular) and not the Red Army (as a whole), there would have been not only Penenzhno, but also Poland itself as an independent state in Eastern Europe (true, with real independence, Poland has today ). Yes, and on the first day of 1959, a Polish boy named Kazimierz, who decided to demolish a monument in honor of the famous Soviet military leader 56 years after his birth, would have been born ... is also a big question ...

Attention is drawn to the fact that even the city mayor’s office in Penenzhno is located on Generalskaya Street ...

In general, the fairly “grown up” Polish “little boy” decided that there should be no monuments “reminiscent of the Soviet occupation” in the territory entrusted to him, and therefore sanctioned the dismantling of the obelisk. The bronze slab from the stele in Penenzhno workers were knocked down with sledgehammers with some special lust. As a result, the relief image of the general Penenzha (what a word ...) the employees of the “Zhilkomkhoz” won, obviously inspired by the fact that the most democratic of the TV channels could show their “feat”. And they showed ... Polish democracy applauds ... 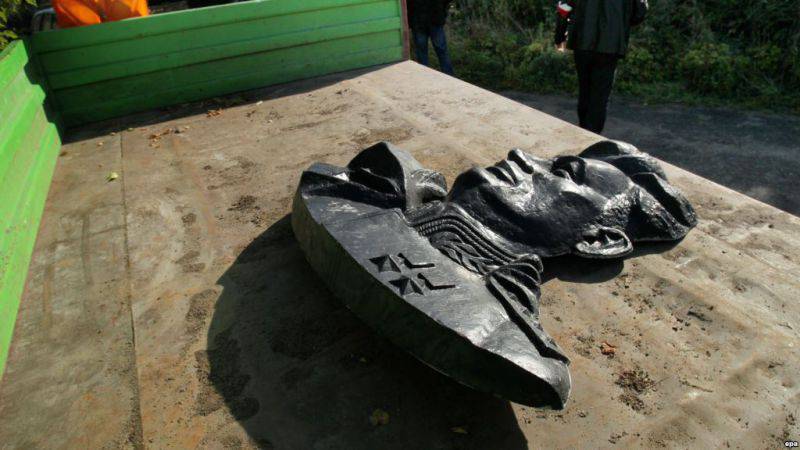 The burgomaster himself, clearly feeling himself a living legend of the city, donated to Poland by the Soviet Union and, as Keido himself claims, immediately "occupied USSR", said that the dismantling of the treasury of a settlement with a population of less than 3 thousand people cost ZNXX thousand zloty (approximately 70 million rubles). According to him, representatives of the Kursk region turned to the authorities of Penezhno with a proposal to take the bust of a Soviet general to Russia, however, when the “minimum” amount was voiced (excluding “other costs”), they stopped receiving the offers. And today, the bust of Twice Hero of the Soviet Union, General of the Army Ivan Chernyakhovsky, damaged by blows from a sledgehammer during dismantling, is gathering dust in one of the basements of Polish Penzhenzhno (East Prussian Melzak), which today is known only for the fact that the famous Soviet military leader died in these places.

Keido:
Russians from Kursk asked us to hand over a monument to them. But when we told how much it would cost, they began to doubt. The cost is about 70 thousand zł. This is 18 thousand euros. I think they are just not ready to pay so much. 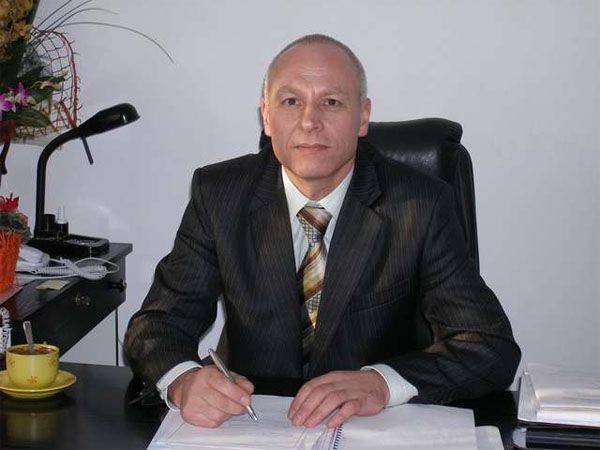 The indignation expressed by the Russian ambassador to Poland, Sergei Andreev (where, by the way, was the Russian ambassador, when in the camp of the authorities of Penenzhno there was talk of the imminent dismantling of the monument to Chernyakhovsky? ..), the Polish authorities said that all questions should be addressed to Kazimierz Kaydo and other representatives of local authorities. Like, it was their “democratic right”, and they fully implemented it. In the electronic edition of the town of Penenzhno appeared "Clarification":
The monument was dismantled on the day of the Soviet invasion of Poland on 17 September 1939.

Here, even if we ignore the statement about the “invasion of Poland” (given that Poland as a state has already ceased to exist on September 17), one may ask: what relation did Poland have to do with Mielzac (Penezhno) at that time ?. It seems that at the lessons of history not only Mr. Keido was engaged in deep picking his nose, but also the future Polish journalists. Or is it about the Soros textbooks of the 1939-80-x sample? ..

In general, a monument to a Soviet general in Poland "won" ...

The material could be completed on this, but ... The information background of this event is too rich to stop the article on this. Here, it is extremely important for you to understand that people like Keido are going to not only smear the story of the liberation of Poland (all of Eastern Europe) from the Nazi contagion with mud, but also earn money from it. After all, it’s perfectly noticeable that the burgomaster Penenzhno is engaged in explicit blackmail of Russia - they say, pay at least 70 thousand zlotys into our pocket, and take the bas-relief for yourself ... But don’t pay - the image of Chernyakhovsky will continue to gather dust in the basement or will completely melt ".

Of course, Russia is not as petty as this Keido beekeeper. Russia will definitely find (at the state or at the public level) this million and a few rubles and will transport the bust of General Chernyakhovsky (by the way, neighboring Ukraine could also find funds, because Yatsenyuk likes to announce that “Ukrainians” were freeing Europe, and Chernyakhovsky - A native of Kiev region). And we are not accustomed to measuring the feat of warriors in rubles, zloty, dollars or euros. We are not used to it, and we are not going to get used to it.

Therefore, I would like to encourage the indifferent compatriots to send Mr. Keido by a coin, and let these coins become his "earned" thirty pieces of silver ... The shipping address:

Mr. Keido also “expects” our questions on the official portal of the province (commune) of Penenzhno. And this question to an enterprising burgomaster each of interested readers can ask here here.

Obviously, “gratitude” and representatives of the public Penenzhno “expect” us, with the filing of which the dismantling of the monument took place. "Expect" on the official page Facebook.

“Military Review” decided not to stand aside and asked Mr. Kazimierz Keido (sending an official post to the mayor’s office) the question of how many “pieces of silver” he needed for Penenzhno to transfer General Ivan Chernyakhovsky’s bust to one of Russia's museums. In addition, a question was asked about how he (the burgomaster) would personally relate to if the authorities of the Smolensk region suddenly decide that the Katyn memorial is a historical misunderstanding, and therefore must be dismantled ...

On the responses of the municipality of Penenzhno "Military Review", if such answers are received, readers will be informed.

Ctrl Enter
Noticed oshЫbku Highlight text and press. Ctrl + Enter
We are
Results of the week. "It is a sin to laugh at sick people"“I do not want to make an empty hole in this place”
Military Reviewin Yandex News
Military Reviewin Google News
112 comments
Information
Dear reader, to leave comments on the publication, you must sign in.