24 September 2015
6
Some see in the Indian Ocean a springboard for investment, others for intervention.


The Indian Ocean has become a sort of springboard for building the naval and air forces of the USA and Great Britain abroad. Since the beginning of the century, the combined power of armaments deployed at the numerous military bases of these countries in this basin has more than doubled. US-UK supply of defense products to countries in the region increased by the same amount.

Famous events in Iraq and Yemen, Sudan and Somalia, the strengthening of ISIL and similar organizations, the long crisis in relations between the West and Tehran, the conflict nature of the Pakistani-Indian neighborhood, the expansion of China’s comprehensive cooperation with the Middle East and Africa, Russian foreign policy and trade and economic activity Egypt, Iran, Sudan and South Sudan, Thailand, South Africa - only part of the factors that determine the growth of the military presence of Washington and London in the region. 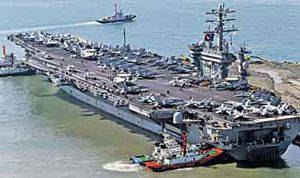 Up to 80 percent of the global sea transportation of oil and liquefied natural gas (including 40% through the Strait of Hormuz and almost 40% through Malacca) passes through the Indian Ocean. To ports in Bangladesh, India, Pakistan, Djibouti, Kenya, Eritrea, it is planned (mainly by Western companies) to build transcontinental gas pipelines.

Central to the military presence of Washington and London in this basin remains the British Chagos Archipelago, located in the central part of the Indian Ocean. These islands in the early 60-x were separated from the then colonial Mauritius. Having gained independence, the country has been trying to attract the UN to the Chagos problem for a decade. But, of course, unsuccessfully ...

December 30 The agreement between Great Britain and the United States on Diego Garcia, the main island of the archipelago, was launched into the region’s largest combined air force base and the naval forces of the United States and Great Britain. Subsequently, it is constantly expanding. Somewhat later, the largest radio intelligence station in the region was created again. Almost all African countries, Asian states in the Indian Ocean basin, Australia, most of the Antarctic, almost a third of China, as well as Central Asia and Kazakhstan are “available” to it.

It was from Diego Garcia that the main military operations of Washington and London were carried out in Somalia and Sudan, Afghanistan and Iraq, in the Persian Gulf and the Red Sea. According to American and French sources (2015 year), the US Navy group in the Indian Ocean, based mainly on Diego Garcia, has up to 20 warships, including two aircraft carriers with 80 aircraft on each. There are also ships-warehouses with heavy weapons, ammunition and items of material and technical support of the marine corps. All this in addition to the large grouping of the British Air Force and Navy on Chagos.

The Canadian Toronto Star noted: “A little-known British possession leased to the United States on 1970 was the most important place for the concentration of US troops during operations in Afghanistan and Iraq. The atoll continues to play the role of an aircraft carrier on which 1700 US troops are permanently stationed. ”

The United States continues to strive to dominate the region, despite allied relations with Britain and France. Back in the middle of 70, shortly after London announced the policy of “military withdrawal from the region east of Suez,” most of the British bases in the region passed to the United States. And where the Americans settled, in the last years of the USSR, as well as at the end of 1990-x and the beginning of 2000-s, a major modernization was carried out. And Iraq’s occupation of Kuwait (in 1990) became a pretext for the return of British military bases to almost all Arab countries in the Persian Gulf region.

As for France, we recall, she was able to retain almost all the island territories in this basin. Most of them are located military and intelligence bases of Paris. But it can be said that the United States has been successfully joining its key strongholds in the region since the middle of the 90's. Thus, one of the largest bases of the naval and air forces of France in the region - near the port of Djibouti (the capital of the former French Somalia) has actually become joint with the United States. American warships and aircraft from the mid-90-s periodically use the French islands in the southern and south-western sectors of the Indian Ocean (Tromelin, Europe, Kerguelen, Saint-Paul, Croiso). But Paris avoids a closer military partnership with Washington and London in this region.

The fact is that it was France who was the first - at the end of 70-x - who advocated the creation of an APEC-type structure in the Indian Ocean basin. The first step was the Interstate Integration Commission for the Indian Ocean (KIO), formed in 1984 year. Today, this structure includes all the French islands in the region, as well as Madagascar, Mauritius, Seychelles, the Commonwealth of the Comoros. Expected entry into the CIO of Djibouti. There is a free trade regime between these countries and territories, France directly or indirectly supports their currencies, and cooperation is developing in other areas.

According to political analyst Charles Vouare, "the participation of Mauritius in the commission shows that in Paris they certainly sympathize with the requirements of Port Louis (the capital of Mauritius. - A.Ch.) about the return of the Chagos Islands to Mauritius. One way or another, France, Washington and London are not attracted to military exercises in the area of ​​this archipelago or to any military operations with Chagos. ”

Meanwhile, information about the plans of China to establish military bases in the Seychelles, in Bangladesh, Pakistan, Tanzania, South Sudan, and Madagascar appears in the media of the countries of the region. There are no official refutations from Beijing. We note in this regard that the ex-United Sudan is becoming the largest seller of oil in the PRC, and Chinese imports of hydrocarbons from other designated countries are growing.

In short, the Indian Ocean is becoming perhaps the main arena for most global players. True, some see here a springboard for investment, others more for intervention.

Ctrl Enter
Noticed oshЫbku Highlight text and press. Ctrl + Enter
We are
Dismantling of civilization on behalf of South Africa ... on behalf of Nelson MandelaEmirati gates of the Russian "defense"
6 comments
Information
Dear reader, to leave comments on the publication, you must to register.