23 September 2015
97
I admit honestly, wrote yesterday's article fun. And he just sneered from the mood. Even went on about a friend, changed rice for millet. Very very stupid Ukrainian eyes climbed. And I chose a narrow topic precisely because. Well, one cannot fail to see what he stumbles upon. Even a blind person will understand that there is something under his feet if he stumbles upon an obstacle. 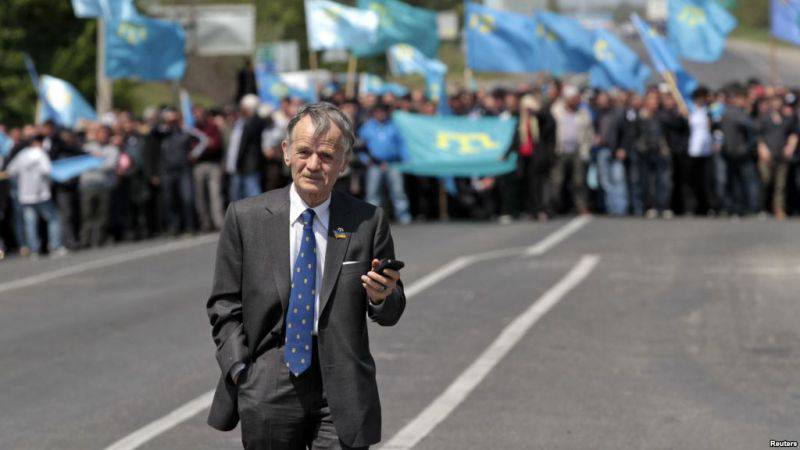 However, this approach does not say at all that I do not see a more global background. This toy blockade. I see. Therefore I am writing. And readers' comments to this are pushing. Therefore, in the title of the article a little bit is forced to change the beginning. It's about serious things.

So, the blockade, some kind, took place. Discarded products by Ukrainian farmers already have. Attempt to ramming checkpoint Ukrainian wagon too. Passions are there. Why is everything serious?

Let me remind readers of the message of last summer. Everything related to the Crimea. By and large, there was no serious action of Kiev in relation to Simferopol. Any remarks about some disruptions of the holiday season. Some eyewitness stories about the deterioration of the life of the Crimean people. Periodic statements of politicians about Crimea belonging to Ukraine.

But on the whole, it seemed that Kiev had come to terms with the loss of the Crimea, and all the talk was only at the level of phantom pains. Honestly, it suited us quite well. And the leadership of Ukraine, too. Problems and without the Crimea enough.

But autumn has come. The eve of winter. Let there be no frosts, no freezing people. But soon, very soon, such a probability will appear. Ukraine is not ready for winter. Ukraine cannot be ready without the goodwill of Russia. And not only because there is no money. But also because Russia can simply “not want” to give free energy resources.

We (with the help of the media) got used to the fact that the main thing for Ukraine is Russian gas. But in fact, besides gas, coal and electricity are needed. Need fuel for nuclear power plants. Any kind of energy is ultimately tied to Russia. Even firewood, if all of Ukraine is transferred to stove heating, will need to be purchased from us.

So, what I mean. Remember last autumn. The same as today. With the same problems. And exactly the same attitude to everything Russian on the part of the Ukrainians. How many expert comments were there that Ukraine would freeze? Who ever wrote about it. And most importantly, no prerequisites for a better share were foreseen.

But suddenly, unexpectedly for the majority, Russia went to a deliberately unprofitable and humiliating agreement for itself. We again began to subsidize the energy sector of Ukraine. We have provided loans, discounts. “Talking heads” appeared on the TV screens, which told about the brotherhood of nations and the compassion of Russians towards the lost Ukrainians. Whatever the political program, the tears in his eyes from the emotion. What we are good.

And only a few understood that Ukraine took Russia for ... let it be-by the throat. And firmly took. And the reason for this situation was the Crimea. It is the energy dependence of the peninsula from Ukraine. And the ability to simply turn off the electricity, gas. How it was made with water.

Everybody knew and knows about it. And many wrote. The Russian government has done and is making titanic efforts to reduce such dependence to a minimum. But we do not have time to start the heating season. You need at least two months. Until the beginning of December.

But this is also known in Kiev. Therefore, to solve questions about the Russian supply will be in the same two months. According to the scenario last year. Either you give us discounts and stuff, or we turn off the Crimea. And the conversations will be on this issue at a very serious level.

However, an attentive reader has a question: does the food blockade have something to do with it? And the Crimean Tatars as performers? Energy is energy, and products are products. The question is reasonable. And the answer to it can not be unambiguous.

Kiev is afraid to directly confront Moscow. Just afraid. Especially knowing the determination of the Kremlin leaders. That's why he gave the Crimean question to the Tatar Mejlis. In this case, in any case, Kiev wins. Successful blockade can be maintained. And thereby gain some rating among the voters. It will fail ... Well then. It was a personal initiative of the leaders of the Majlis, and the leadership of Ukraine has nothing to do with this.

I'm not sure that readers are particularly interested in the statements of Chubarov and his ilk. The Crimean Tatars from outside Crimea are already actively calling for an expansion of the blockade. Not limited to products. But turn off both electricity and gas. Yes Yes. Exactly this. Your eyes don't lie to you.

It seems to me that the Ukrainian authorities are now trying to play the same card as last year. Only now, due to the sharply increased risks of getting one's hands, the Crimean Tatars were chosen as the main performers. And the rate has changed somewhat.

Today, Kiev needs the Majlis to recognize in Russia the same extremist as the Right Sector. To create an additional trump card for talking about the oppression of the indigenous peoples of Crimea. Therefore, Ukrainian and Crimean-Tatar nationalists united in a blockade.

In general, Ukraine is now frantically searching for ways to somehow “put pressure” on Russia. It is to Russia. Waiting for help from Washington or Brussels is not particularly reasonable. And there, and there Poroshenko received quite a clear "nonsense." Both Obama and Merkel with all the others are actively looking for a replacement for the “spent leadership of Ukraine.” Under these conditions, any instability in society can lead to a coup d'état. Not to the Maidan, namely to the coup. From the palace series.

So we will laugh at the blockade, but also look around too. To time too ridiculous heel on dirty hands pin down.

According to our information, the blockade of the peninsula is carried out by three groups.

1. Checkpoint "Chongar". There really are several dozen activists from the Crimean Tatars headed by Refat Chubarov.

In addition, a hundred of the "Right Sector" occupied the village of Chongar. Guard headquarters Dzhemileva. Fighters with the emblems of "Azov" are also noticed. There is a construction of concrete obstacles on the type of Donetsk. Blocks bring up "dogs" and "Azovs".

In addition, the border tightened:

1. The battalion of the Ministry of Internal Affairs of Ukraine "Kherson".

3. Separate divisions of the 79-th airmobile brigade of the Armed Forces of Ukraine.

4. Separate units of the 36 Brigade of the Marines of the Armed Forces of Ukraine.

According to the latest official reports, the leaders of the Crimean Tatars are now actively pushing the idea of ​​creating food hubs in Ukraine. According to unofficial data, they actively intercept the delivery routes of Ukrainian goods and offer their services as carriers.

We are in Yandex Zen
Results of the week. "God forbid to see Russian revolt, senseless and merciless!"
Strangulation: the context, conduct and consequences of the American naval blockade of China
97 comments
Information
Dear reader, to leave comments on the publication, you must to register.