The head of the family is six-year-old Vanya

We believed: trouble chase away.
After all, we are soldiers, only of small stature.

Not big at all, but a slender army was heading from the village of Filatovka a half dozen kilometers to Lipetsk, where the military registration and enlistment office was located. In the roadside dust traces of soldiers' boots were clearly imprinted. Traces of bastards were minced next to them - they were wives, sisters, mothers. And the prints of the bare feet of the daughters and sons were scattered a little behind. 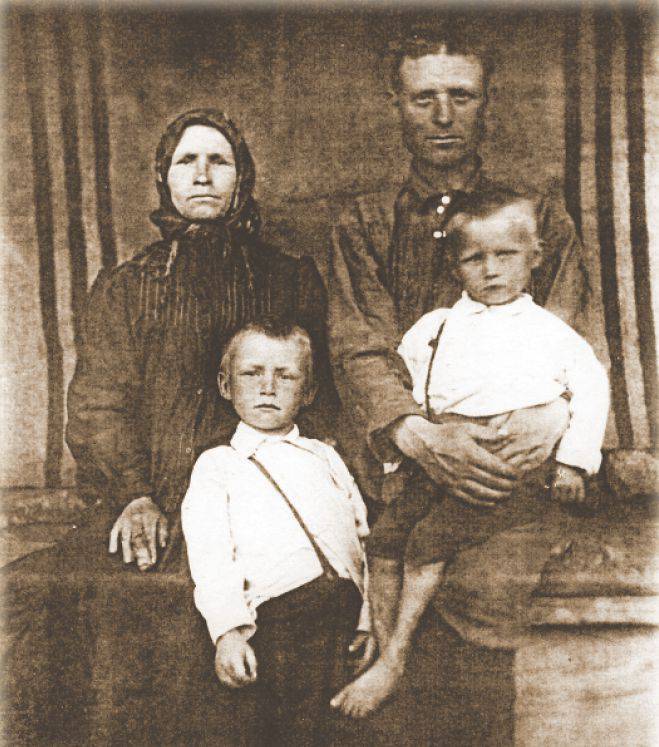 Following the soldier Boris Mikhailovich Goncharov, his whole family was walking - a spouse and six children. More precisely, they themselves were only stamped by five children, and the youngest, eight-month-old Ninochka, was carried on their hands.

However, among the members of the household, the silenok was smaller than that of Boris Mikhailovich. And when the children, tired of, one after another began to fall to the ground, the head of the Goncharov family also stopped. He carefully looked at his wife and children.

“Be courageous, dear ones,” he just said and left.

The case of wolves

That first year of the Great Patriotic War, Vanya, the eldest son of the Goncharovs, was only six years old. But now childhood is over, and all the boys and girls turned into adults of small stature. So Vanya, who would play with toy cars and soldiers, became the mainstay of a large family. Let his legs be left in the dust of the road so far that little footprints, and Vanya’s mom did not even reach the shoulder. But the boy realized that he should help the family to feed. After all, the time was coming very hungry.

True, Vanya's hands were still inept, and no one could help with advice and deed. But in the corner, as before the war, there was an old father's gun, and cartridges were gathering dust in the box. Boris Mikhailovich was known as the best hunter in Filatovka and, it happened, in peacetime he brought home more than a dozen ducks in one day.
When and how Vanya learned to shoot, he was known alone. But he mastered this business so famously that very soon in the Goncharov family almost every day they dined a hare roast for dinner. And the famine, which almost became the master of the house, now went out the door and hid there.

But to get a hare oh so easy. Skewed oblique, often make big discounts. In addition, the fresh trail must be distinguished from the old, otherwise the whole hunt for the cat under the tail. Here, an adult is easily confused, and Roly himself, without any prompting, learned to read a snow book. And when one day in winter I saw fresh sweeping, dog-like, but clawed tracks in deep snow, I immediately realized that these were wolves. The boy carefully walked around them and went out into a large clearing where rabbits sat thickly. But just figured out the tracks, wolves appeared: one, the other, the third - a large flock ....

Though the war turned Vanya into not the age of an adult, but the heart, then he left a child. It shrank from fear, meeting trouble alone, without adult defenders. True, not only for a little scared hunter. He remembered his hungry family, for whom no one would catch a hare tomorrow. I also regretted that his faithful friend, a small dog, with which they always tracked hares and white hares, would die now.

These thoughts gave strength. And with all the urine, Vanka skied to the stacks of straw that rose in the field. He ran awkwardly, slightly kosoboko, because he squeezed his dog in his left hand. But he did!

The pack surrounded a huge stack, snarling and squealing with impatience to devour the prey. It was possible to shoot and scare away wolves, but Vanya felt sorry for the bullets. Yes, and he knew that all the animals still did not shoot, and the smell of blood only infuriates the predators. Therefore, the boy threw the ski stick to the wolves, then another, then the skis, lined with elk skin (so they slide better and do not roll back during the course of the mountain). Under the wolf's teeth it all shattered into pieces. The animals came closer and closer to the boy, the stack-hero was inferior to them, but still held Vanya and the dog high on his shoulders ...

They were saved by old men passing by on a cart. Seeing trouble, they shouted, pounded, who with what could, fired a couple of times into the air. And then they took off frozen, frightened pseudo-hunters from the stack and took them home.

In his own, Goncharov way, he got Vanyushka and gophers. Moreover, he taught the case to her older sister Katya and younger brother Misha. The guys tried to eat boiled animals, but their meat was too hard and unpleasant to taste. His stomachs were very painful, nauseous. Then they started cooking soap from this meat, adding caustic to the water. By the way, this soap helped a lot from lice, which became a great misfortune during the war. In addition, homemade gopher soap in the village could be exchanged for small things and even food.

Splitting firewood also became Vanya’s duty, although no one forced him to do it. True, the heavy ax, accustomed to Boris Mikhailovich’s dexterous hands, initially did not obey the boy. I had to chop wood on my knees, so as not to snip my leg.

Vanina's mother, Tatyana Pavlovna, used to bake bread for the entire collective farm. Just imagine: every day there was a very tasty smell in the Goncharovs' house. But none of the guys never allowed himself to break even the crust! Little Nina - and she was not capricious. Everyone knew: bread is a stranger. One can only inhale the aroma and dream. Hunger does not win, but what to do?

In the 1943 year, a notice arrived that Boris Mikhailovich went missing. Only this was indicated in the paper, which means that it was impossible to officially consider the head of the Goncharov family as a hero. What if he surrendered or worse, became a traitor? Nevertheless, all Filatovka knew - Boris Goncharov is not one of them. If he died, then defending his land to the last breath.

Time passed, but the news about the fate of his father still did not come. And then - the long-awaited Victory. She brought great joy, and along with it - hope. But they were not justified: the family remained orphaned. And now Vanya, already ten years old, has become a recognized senior man in his house. He continued to take care of his mother, sisters, and brothers. He turned out to be their real support, courageous little adult man who fulfilled the last testament of his father.

... Ivan Borisovich graduated from a vocational school. He served in the army, worked in his own collective farm, then he was a huntsman in Filatovsky forestry. There was no trace of an animal or bird that he could not read. It did not grow in the Dobrovsky district and in the whole area of ​​a tree or bush with an unknown name to Ivan. He understood the forest well and infinitely loved all of its inhabitants, even the wolves, who had nearly torn to pieces.

However, the life of Ivan Borisovich was short: at forty-five years he died tragically. Having learned the terrible news, his mother, Tatiana Pavlovna, lost her sight.

A few years after that, Nina Borisovna, the very little one, found the “strings” of her father’s fate. Boris Mikhailovich died the death of the brave in the Bryansk region.

It is a pity that Ivan did not have time to find out. But he probably did not need such confirmation. After all, the character of the Goncharovs is inherited.
And now look at the photo, please. On the first day of the war, a photographer walked through Filatovka. Fathers were in a hurry to take pictures with their families. And, probably, looking at the lens, they all thought: what if this is the last shot? But look at the faces of Boris Mikhailovich, Tatiana Pavlovna, Vanya. No one has any fear. Though they do not know what is ahead, but they are not afraid.

Ctrl Enter
Noticed a mistake Highlight text and press. Ctrl + Enter
We are
War without bootsFather told
11 comments
Information
Dear reader, to leave comments on the publication, you must to register.