22 September 2015
112
One of the most discussed topics related to the situation in terms of steps to combat corruption is the arrest of the head of the Republic of Komi Vyacheslav Gaizer and almost the entire republican elite. The press service of the Investigative Committee of Russia provides a complete list of Komi officials, in respect of whom criminal cases were initiated under various articles of the criminal code. In addition to Gaizer, who is charged with organizing a criminal community and fraud on a large scale,


Deputy Head of the Republic Alexei Chernov, Chairman of the State Council of Komi Igor Kovzel, Deputy Chairman of the Republican Government Konstantin Romadanov, former Senator from the Republic Yevgeny Samoilov, as well as a group of officials who in the RF IC were called "technology financiers." The members of this group are Pavel Marushchak, V. Molyarov, D. Moskvin, A. Goldman, V. Veselov, I. Kudinov, A. Faershtein, L. Libinzon, N. Motorina, M. Khruzin.

In the framework of the criminal case, investigators of the Russian IC together with the operational officers of the FSB of Russia conducted more than 80 searches in the Komi Republic, St. Petersburg and Moscow. According to the results of investigations carried out in the places of residence and work of the defendants in the criminal case, more than 60 kg of jewelry were seized, 150 watches cost from 30 thousand US dollars to 1 million US dollars, more than 50 seals and stamps of legal entities involved in the implementation of offshore schemes, financial documents on the legalization of stolen assets totaling more than 1 billion rubles.

At present, urgent investigative actions and operational-search measures are being carried out aimed at establishing all the episodes of criminal activity and detaining all persons who were part of the criminal community.

Gaizer’s lawyer petitioned the court to elect a preventive measure in the form of the defendant’s case under house arrest (Gaizer’s wife has an apartment in Moscow), but the court rejected the petition, sending the head of the Komi Republic to the Lefortovo detention center. The court chose such a preventive measure due to the fact that Gaiser could have escaped from the law enforcement officers, after all, they had detained Gaiser before his departure “on vacation” abroad. The detention of the head of the republic was carried out in Moscow. 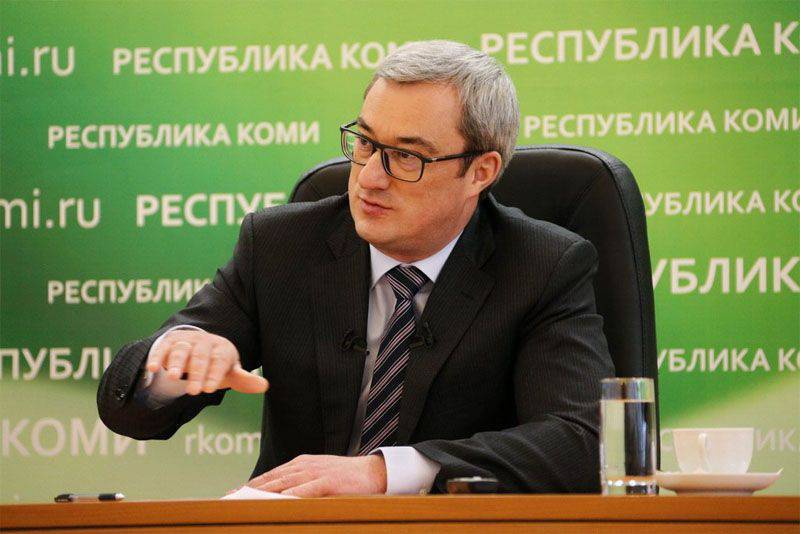 What is known from the bureaucratic "asset" Vyacheslav Gaizer? Gaiser - a native of the Komi ASSR. In 1991, I received a diploma from MESI in the specialty “Automated control systems”. At the age of 36, he ascended to the post of deputy head of the republican ministry of finance. A year later, the miner headed the ministry and worked on this post 7 for years. During this time, managed to enter the first hundred of the so-called presidential reserve of managerial personnel in Russia. During his tenure as Minister of Finance, Gaiser also served as deputy head of the Komi Republic. In January 2010, the then-President of the Russian Federation, Dmitry Medvedev, Gaizer’s candidacy was introduced for consideration by deputies of the State Council of the Republic as a candidate for the post of head of the region. The State Council was supported by the candidate, and Vyacheslav Gaizer held this post until January 2014. After the expiration of the term of office, Russian President Vladimir Putin appointed Gaiser, the acting head of the Komi Republic, until the elections were held in September 2014. At the elections, Gaizer, a member of the regional branch of the United Russia party, enlisted the support of voters — almost 79% of voters voted for him.

Attention is drawn to the fact that United Russia in the Komi Republic during the single voting day of 13 in September of the 2015 of the year in the Komi Republic also celebrated the victory, gaining about 58% in the elections. The secretary of the regional branch of United Russia, by the way, was the aforementioned Chairman of the State Council of the Republic, Igor Kovzel, who, according to some sources, received more thanks from the head of the Russian government Dmitry Medvedev, who is the chairman of United Russia, after the elections in Komi. Less than a week after the election, Gaizer and Kovzel were in Lefortovo. And one more important aspect: Vyacheslav Gaizer was among the five most effective governors of Russia, according to the version of the Civil Society Development Fund.

Analyzing the totality of these data, we can conclude that, at least externally, Gaiser and Co. looked quite successful in terms of “effective management” by officials who, as they say, argued, and who, judging by the election results, also residents of the regions trusted. It would seem, well, it’s still good - a member of United Russia, a rating leader of the republic, and almost 80% in the elections of the head of the region, and then — bang — the Investigation Committee, questionable operations per billion, the withdrawal of large amounts of material values, not the corresponding income statements ... Lawyers, of course, stated that it was some kind of mistake, that material values ​​were not so valuable (the watch collection belongs to Gaiser, but only this is just “Chinese” replica watches of well-known companies), that the person was crystal pure and infallible.

As you know, the presumption of innocence has not been canceled yet, and therefore it’s too early to wait for the court to argue whether the money was out of the republic’s budget, Mr. Gaiser and his colleagues. It happens that the court is already decided when not everyone remembers, and who is this Gaiser ... And indeed, in our justice, sometimes there are various incidents ... History with the former leadership of the Ministry of Defense and the Department of Property Relations, when one has negligence and sudden amnesty, and the other has an inevitable parole, still makes him keep his eyebrows raised high up. Therefore, it may happen that the funds were not withdrawn from the budget at all, but were hidden in offshore companies only for the sake of saving from incinerating anti-Russian sanctions so that the enemy could not get ... And, perhaps, Mr. Gaiser and all the other defendants in the case it will even reward ...

Is there anything else worth mentioning in Vyacheslav Gaizer’s biography? Perhaps this episode from the life of Gaizer has nothing to do with his current activities, and all the more, he does not have an arrest, but still it is impossible not to say about him. The fact is that at the end of 80-x - the beginning of 90-x (V.Gizer himself told about this at one time) he had an internship at the well-known commercial organization Menatep in Moscow. Representatives of Menatep suggested that Gaiser, after graduation from the university and internships at the main office, go back to the Komi Republic, where it was possible to become a representative of the regional board of the bank in Syktyvkar. Gaizer accepts the offer and already in 24, becomes Deputy Managing Director of the Syktyvkar branch of Menatep, and two years later - Vice President of Komibank. It is noteworthy that less than three years later, as Gaiser became the deputy main protagonist of Komibank, and the bank suddenly went bankrupt. The Central Bank revoked 10 July, 1996, the bank has a license with wording:

The license was withdrawn due to the bank’s failure to comply with the requirements of the current laws and regulations of the Bank of Russia, poor financial situation, and failure to fulfill obligations to depositors and creditors.

If someone forgot about what Menatep is ... This is the brainchild of Mr. Khodorkovsky, or rather, those who were behind this 23-year-old (at the time of the distant 1986 year) person. Menatep received its first scandalous fame at the end of 80, when it became clear that it was through this structure that “young initiative Komsomol members” spent millions of Soviet rubles allocated to eliminate the consequences of the accident at the Chernobyl nuclear power plant. It became known that the money that went through the bank directly from the state budget, through the whole network of regional representative offices of Menatep either disappeared without a trace, or went to projects that were frankly far from the activity of providing assistance to territories affected by radioactive contamination. Wasn’t Menatep’s Syktyvkar office part of this scheme? After all, Komi is very far from the infection zone, and therefore, it seems like, less suspicion ... At one time Khodorkovsky tried to ask about the “Chernobyl money” even the head of the Central Bank Gerashchenko, but apparently did not receive a reply ...

The activities of Menatep after the collapse of the USSR, as they say, are more widely known, like the activities of Mr. Khodorkovsky himself. The management of the bank had really impressive connections in the most diverse state structures with access directly to Boris Yeltsin, which allowed the top financial organization to implement the most seemingly adventurous schemes. One of the episodes - through Menatep, 600 million rubles were cashed in 1992 with a fake advice note. And this is not the only episode of major frauds.

Whatever it was, but the fact remains: it was Menatep who put the young Gaizer in Komi, and during that time Gaizer realized a dizzying career - from the deputy head of the bank to the head of the richest region. Zameterel and lost the coast? .. Or the former chief of Menatep decided to recall his protégé and made a call about the new "business proposal"? ..

Ctrl Enter
Noticed oshЫbku Highlight text and press. Ctrl + Enter
We are
Results of the week. "It is a sin to laugh at sick people"Situational analysis of the death of the MH17 flight (Malaysian Boeing 777), made on the basis of engineering analysis from 15.08.2014
Military Reviewin Yandex News
Military Reviewin Google News
112 comments
Information
Dear reader, to leave comments on the publication, you must sign in.